Limited is back once again in basketball, and Panini America is promising “a clever new technological twist” to the typically foilboard-heavy line.

Panini revealed the first looks and basic information for the product, which is set to arrive in late-November, on Tuesday, once again touting its double Rookie Card class and more.

The base set as a whole will include 250 cards with three parallels (Silver, Gold, Platinum) with two autographed cards and one memorabilia card guaranteed in every seven-card box.

Oh, and the twist? Well, it starts with diecut acetate cards. The Rookie Cards will be printed on acetate (clear plastic) and be signed directly on the cards themselves, which will be diecut in the style of the NBA’s Rookie of the Year award. This offering alone will consist of 100 cards, all limited to 399 or fewer copies, and include last year’s Rookie of the Year Kyrie Irving as well as this year’s No. 1 pick, Anthony Davis.

Also new this year will be the “Revolution” memorabilia card, which can be found via the Home & Away insert set here. It’s a memorabilia card that has a suspended swatch in the middle of each card — with these cards having a road jersey on one side and a home jersey on the other.

Other inserts to be found here — six on the memorabilia side and five autographed — also include Glass Cleaners, Unlimited Potential, Masterful Marks, Material Monikers, Lights Out and Spotlight Signatures.

Look for prime versions as well as autographed memorabilia versions for some of the sets. 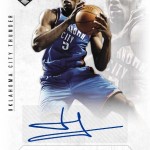 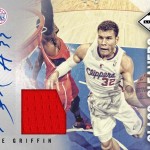 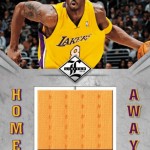 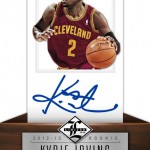 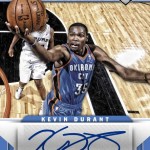