For those who follow pro wrestling, they have likely noticed a new look for Total Nonstop Action Wrestling as the company has in a way re-branded itself.

That new look and vibe in its marketing campaign — all to enhance the “wrestling” aspect of the programming — is seen on the forthcoming TRISTAR release, TNA Signature Impact.

Signature Impact will be the rarest TRISTAR wrestling product ever released as there will be a mere 90 24-box cases made with each 20-pack hobby box packing three autograph cards, one memorabilia card, two parallels and one short-printed card of Hulk Hogan, Ric Flair or Sting.

The newest chase here, though? A 1/1 cut autograph of the late “Macho Man” Randy Savage, who briefly wrestled for TNA in 2004.

Each case will include a Hogan autograph as well as a Sting or Flair signature, while TRISTAR has upped the ante again from its past multiple-signature cards to include cards with as many as eight signatures this time around.

Every box will include at least one multi-autographed card.

The memorabilia card lineup will include jumbo swatches, signed cards, Flair Letter Cards that spell out his last name via the diecut memorabilia windows as well as quad memorabilia cards with pieces from four stars embedded into the card. 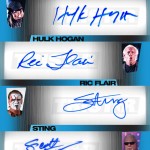 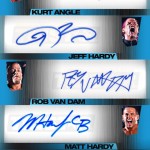 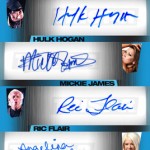 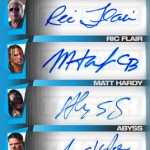 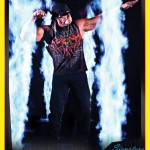