TRISTAR will have plenty of things in store at this year’s National Sports Collectors Convention just two weeks away in Chicago and one of them is the debut of its latest baseball card set, 2011 Obak, which also is known as “A History of the Game.”

The third edition of the retro-styled set based on early 1900s tobacco cards of the same name will include four autographs — one of those guaranteed to be a cut autograph — in every 24-pack hobby box with two parallels numbered to 25 or fewer copies, one T212 mini parallel, three additional short-prints and one T4 cabinet card.

Among the biggest highlights is a dual-cut autograph pairing Babe Ruth with Charlie Root, the Chicago Cubs pitcher who gave up the called shot in the 1932 World Series. Other cut autographs will include Joe DiMaggio paired with Ken Keltner, Ichiro Suzuki paired with George Sisler, and there will be cuts of Mickey Mantle, Hank Aaron, Hank Greenberg and Lefty Grove. All cuts will be numbered to 75 or fewer copies.

Among some of the signers for the product are Cal Ripken Jr., Mike Trout, Ken Griffey Jr., Whitey Ford, Manny Banuelos and Nolan Ryan. T212 mini autographs will be found one per case along with a 1/1 cut as well as one Hot Box, which will include 10 autographs and more than 20 additional inserts inside.

As with many of the recent TRISTAR products, the production on this one will be limited. There will be just 75 24-box master cases made with each box and case serial-numbered.

The product will make its public debut at the NSCC while those elsewhere will have to wait until Aug. 10 for it to arrive. 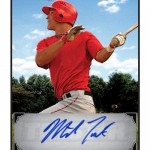 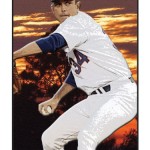 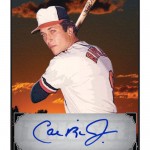 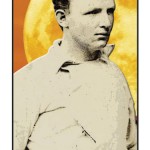 Coming soon … Moneyball and its memorabilia