Topps unveiled the basic product information and preview images for its newest debut baseball card line, Tier One, on Wednesday, and it’s a product that it says it “the definitive on-card autograph release for 2011.”

So what does that mean?

It means two autographs and one Relic in every pack along with three base cards and a parallel inside as well. Every 12-box case of the hobby-exclusive product will include one Top Tier on-card autograph, too.

It will arrive in mid-November packing plenty of punch — and apparently even an autograph of boxer Manny Pacquiao, though he does not appear on the preliminary checklist for the product.

Learn more and see images after the jump.

There will be a small selection of dual (15) and triple autographs (five cards) limited to as few as 10 copies, while there also will be 25 1/1 cut signatures to be found in the high-end product. The only announced name among the cuts so far is the newly signed Joe DiMaggio.

The base set will consist of just 100 cards — retired players, veterans and rookies — while the parallels will include Tier One (1/1s) down to Tier Four, which will be limited to 199 copies.

The Hosmer autograph would be his first on an MLB-authorized card. 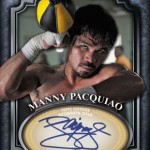 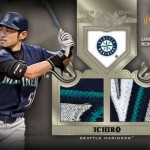 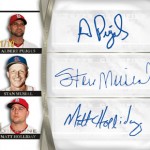 So we’ll be mentioning a few players’ ...

And in this corner: Ringside Boxing Round ...