Topps has a tendency to make big football card news on Fridays.

Today, the company headlines the hobby with the announcement of 2011 Topps Chrome Football — reincarnated with design staples and a handful of new exclusives.

Hitting shelves in late October, the hobby mainstay will come in four-card packs and 24 packs per box. Case chasers can expect to break 12 boxes per case. Each hobby box should yield one autograph Rookie Card, nine inserts and nine parallels.

The one-per-box hits — rookie autographs — feature the penmanship of 45 rookies from the base set in both on-card and on-sticker form. These cards also come in Refractor parallel versions including:

The October release also features all 220 base set players in the following parallel forms:

Stay tuned to Beckett.com for more details and preview images as they are released. 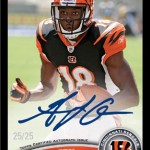