The late-summer brand, slated for an Aug. 17 shelving date, should arrive with the usual fan favorites and some new twists.

“The Rookie Class Gold autos are a unique twist on an established concept and will be among the most sought after singles in 2011 Threads; the Pro Gridiron Kings, with their proud lineage dating back to the early 2000s, tend to speak for themselves,” said Panini America NFL Brand Manager Carlos Torrez.

More details and eye candy after the jump.
Also headlining in 2011 Threads are:

Torrez adds, “[2011 Threads] comes out right before the season and, like its name suggests, is loaded with NFL threads in the form of captivating game-worn memorabilia from veteran NFL stars and a healthy dose of event-worn memorabilia from the top 2011 rookies who attended the 2011 NFL PLAYERS Rookie Premiere.” 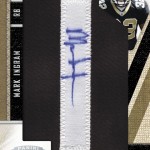