Panini America‘s offered the first looks and basic product information for its first NBA product of the 2011-12 card season Friday, and it’s a high-end return to the court made up of three past favorites.

It’s 2011 Preferred basketball, and it’s comprised of cards echoing three past products in the company’s portfolio — Panini’s Choice (a nod to Cramer’s Choice from the Pacific days), Crown Royale Silhouettes and Donruss Signatures. In fact, it’s a “three-brand” product without “base” cards at all as every card in the set is autographed except for a selection of booklet cards.

Set to arrive in late-February, this $200-per-pack product will include three autographed cards and one six- or eight-piece booklet card in every pack.

All autographs will be limited to 99 or fewer copies, meanwhile the autographed Silhouettes cards will include 10 retired legends of the game.

Meanwhile, there will be three designs per player — one from each of the aforementioned looks — for players who were rookies last season.

Also of note? This will be the first product to include Chris Paul autographs signed for the company. 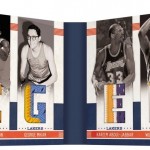 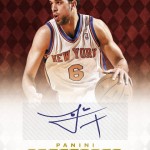 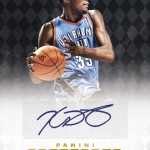