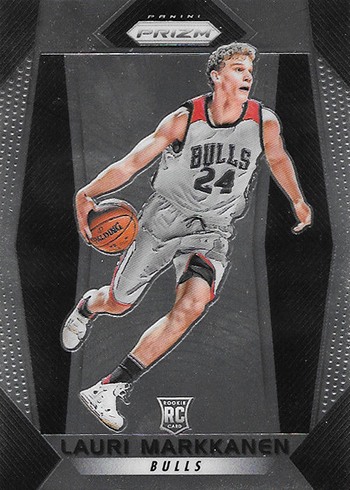 The Chicago Bulls have a very different look than they did a couple of years ago. Jimmy Butler and Dwyane Wade are gone and Derrick Rose is but a memory. And while the team is currently near the bottom of the standings, there are some positives in the core they’re building around.

Some of that came through last night in Chicago’s thrilling double-OT win against the New York Knicks. Rookie big man Lauri Markkanen dropped 33 points in the victory. The majority of those came from downtown as the Finnish seven-footer sunk eight three-pointers.

As far as cards go, Markkanen can be found throughout 2017-18 basketball products. This includes autographs. The 2017-18 Panini Prizm Lauri Markkanen Rookie Card brings plenty of shine at a moderate price. Outside of autographs and low-numbered cards, Prizm has become one of the key basketball brands for Rookies and set building. There’s also the Prizms rainbow that has lots of added color and patterns.