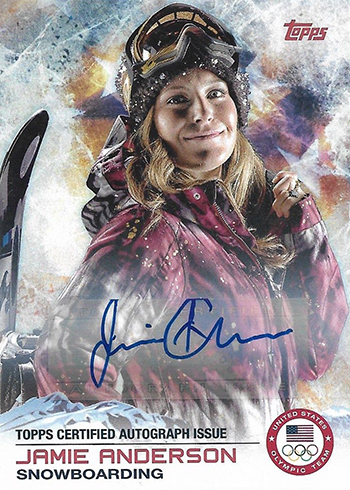 Jamie Anderson became a two-time Olympic gold medalist by defending her women’s snowboarding slopestyle title. It was a windy day that, perhaps, should have seen the action postponed. But it wasn’t and Anderson came out on top thanks to a strong first run.

Although the event itself may have been a disappointment to riders and those trying to watch in the stands, Anderson came to PyeongChang as one of the favorites. She won gold in Sochi in 2014. The 27-year-old is also the reigning X-Games slopestyle champion. Since 2006, Anderson has missed the X-Games podium only once.

These Olympic sets are popular with in-person and through-the-mail autograph collectors. So there’s a couple of easy ways to tell if one came from packs or was signed after the fact. The first is the signature itself. 2014 Topps US Olympic Team autographs are done using stickers. So if it’s an on-card signature, it’s not certified by the card maker.