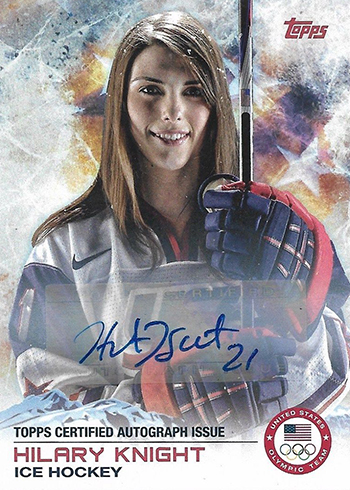 One of the great rivalries in sports over the past decade has been between the American and Canadian women’s national hockey teams. Another chapter was written last night with Team USA winning gold in a shootout. Despite the two countries going back and fourth on the international stage for years, Olympic glory had been tough for the American team, having endured a 20-year gold medal drought.

But that streak is over now. And the rivalry must continue.

Women’s hockey is a growing sport. And one of its biggest stars is Hilary Knight. She opened the scoring for the United States in the gold medal game. This is her third Olympics representing the stars and stripes, having been part of the silver medal-winning teams in Vancouver in 2010 and Sochi four year later.

Knight is also a member of the National Women’s Hockey League’s Boston Pride. She led the league in scoring in 2016. Like many of her teammates and competitors, Knight is an advocate for the sport, its continued expansion and equality.

Hilary Knight has just a handful of cards, all but one of which is part of the 2014 Topps US Olympic Team checklist. She’s in the base set and has some inserts but her most popular card is an autograph. It’s not the easiest of cards to find today.

If you are looking for a pack-inserted Hilary Knight autograph, be sure to watch for the sticker. Topps Olympic sets are popular with in-person and through-the-mail autograph collectors. So if you see one that’s signed on-card, it was autographed after the cards originally came out. Pack-inserted cards also have a “Topps Certified Autograph Issue” note above Knight’s name.

Currently, the only other Hilary Knight card came in a 2012 issue of Sports Illustrated for Kids magazine.