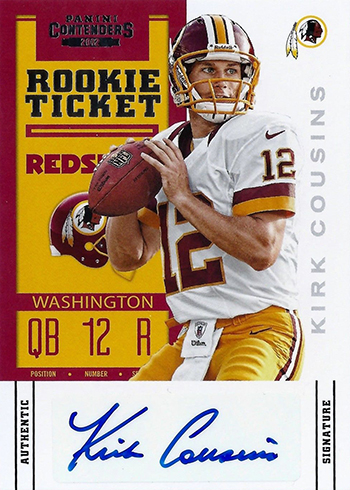 2012 was a big year for rookie quarterbacks. Andrew Luck and Robert Griffin III went one-two in the draft. Ryan Tannehill and Brandon Weeden also went in the first round. Within a couple of years, Russell Wilson helped bring a Super Bowl to Seattle for the first time. Kirk Cousins was all but an afterthought at the time with Washington having franchise dreams for RG3.

What a difference six years make.

Wilson has remained consistent, Luck has shown signs of greatness but his injuries are adding up. It’s much the same for Tannehill. RG3 looks to be done and probably Weeden, too. Meanwhile, Kirk Cousins is out there changing the face of free agency.

Yesterday, Cousins was officially introduced by the Minnesota Vikings. And the quarterback is getting a massive payday of more than $80 million over three years guaranteed.

Combine that with Jimmy Garoppolo’s recent deal with San Francisco and you can tell that QB contracts are evolving fast.

As far as Kirk Cousins Rookie Cards go, he wasn’t on the radar much in 2012. At the time, he was the consolation prize for not getting an RG3 for the Redskins spot in a group break. In 2012 products, he was frequently grouped with second-tier rookies so he didn’t get nearly as many premium cards as Luck, Wilson and even Trent Richardson.

The 2012 Panini Contenders Kirk Cousins Rookie Card is an example of this. Yes, it’s signed. But rather than being on-card like other top rookies back then, his signature comes on a sticker. For National Treasures, he has just an autograph (also a sticker) and not a Rookie Patch Autograph.