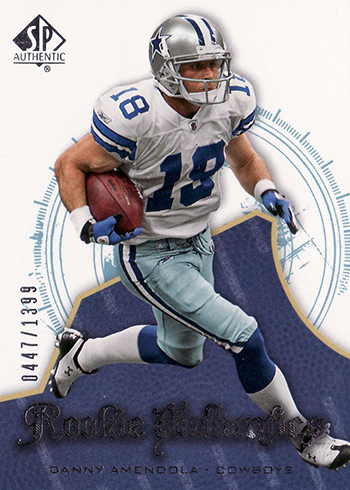 Most players today have dozens of Rookies Cards. These cover everything from entry-level base cards to autographed memorabilia rarities that come out of boxes costing hundreds of dollars.

Exceptions do exist. Danny Amendola has just one Rookie Card.

Upper Deck was the only company to put Amendola in a base set in 2008. And for good reason. He wasn’t taken in the draft and signed with the Cowboys as a free agent. Even then, he was relegated to the practice squad. Under normal circumstances, there’d be limited interest in a huge stash of cards from a player with limited prospects.

So the 2008 SP Authentic Danny Amendola Rookie Card was it and few people probably gave it much thought for several years. Not only is it Amendola’s lone RC, but it’s numbered to 1399, letting the collecting world know exactly how many there are. It has no parallels.

The only other Danny Amendola card from his rookie season is a bonus card in the Dallas Cowboys version of the 2008 Topps Football factory set.

After moving from team to team for a few years, Amendola joined the New England Patriots as a free agent for the 2013 season. Since then, he has become one of Tom Brady’s favorite targets. That’s raised Amendola’s stature tremendously and has led to some big moments.

That includes a pair of fourth quarter touchdowns in New England’s comeback win against the Jacksonville Jaguars in the AFC Championship. These were big TDs. The first helped turn the momentum in the Patriots’ favor. The second won it.

And now it’s off to the Super Bowl where Amendola will try to win his third ring. But even if he doesn’t, he already has more Super Bowl wins than Rookie Cards.