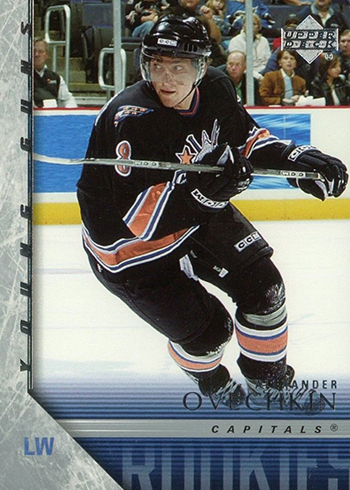 Already in the top 20 all-time for the league’s goal scorers, the Russian sniper will find himself moving up the list quickly over the next couple of years.

Few will argue his place in the modern game as the league’s best pure goal scorer over the last couple of decades.

And then there’s that ongoing rivalry with Sidney Crosby. It has quieted a little in the last couple of years now that Crosby has three Stanley Cup rings and Ovechkin has been part of several early postseason exits. And while Crosby’s cards have emerged as clear hobby favorites, Ovechkin’s early cards seem like a bargain today in comparison.

With the NHL returning from a strike, 2005-06 hockey sets are loaded with big-name Rookie Cards. Among the most iconic are the 2005-06 Upper Deck Young Guns. The subset was already emerging as a collector favorite, but Crosby, Ovechkin and company made them a hobby cornerstone.

Kid Collectors of the Week: Caleb and ...