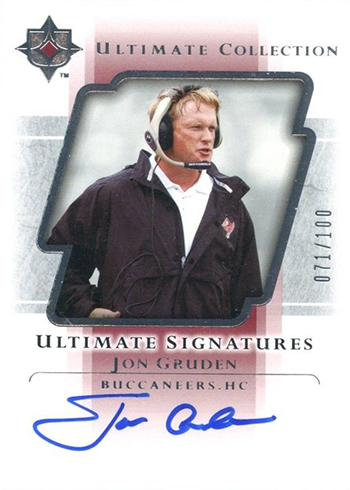 It’s officially official. Jon Gruden is back as head coach of the Raiders, a post he originally held from 1998 to 2001. After a public courtship amid the rumor mill, Oakland made the announcement a couple of days ago. Yesterday, they publicly welcomed Gruden back at a re-introductory press conference.

Save for a couple of exceptions, cards of coaches don’t normally generate a lot of interest in the hobby. That’s why they’re done on a sporadic basis.

Gruden currently has 29 cards. Twenty-eight of those came out in 2004. Twenty-seven of those have autographs. The 2004 Upper Deck Ultimate Collection Ultimate Signatures is one that stands out. First off, it’s an on-card autograph. Most of Gruden’s other 2004 autograph cards come courtesy of stickers. And not just any stickers but the bright foil stickers that were a thing in so many products then.

Numbered to 100, that’s the number of millions Gruden is reportedly set to make over the next decade with the Raiders over the course of the contract.