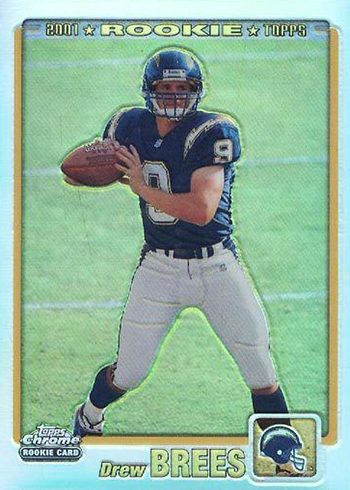 Drew Brees and the New Orleans Saints are still marching. The knocked off the Carolina Panthers in a 31-26 wild card weekend win. And the quarterback was a big reason why. Brees threw for 376 yards including a pair of touchdowns.

The future Hall of Famer has already built himself a massive legacy in New Orleans. However, a second Super Bowl ring would take things much further. Even a deep playoff run should act as a reminder as to just how great a player Brees has been.

When it comes to Drew Brees Rookie Cards, there are a lot of them. The 2001 Topps Chrome might not be the most valuable, but it’s not autographed either. Numbered to 999, all base versions are done as Refractors.

The card’s only one parallel is a Black Refractor that has 100 copies.

It’s worth noting that the 2001 Topps Chrome Drew Brees has a Rookie Reprint insert in 2012 Topps Chrome Football. Base versions of these aren’t Refractors. Reprint parallels are numbered. If in doubt, look at the copyright date on the back. The Rookie Reprint clearly shows the 2012 date.

The Daily highlights a key player or personality in the world of sports or collecting from the past 24 hours along with one of their key cards.
TagsDrew BreesThe Daily
Share:
Previous Article