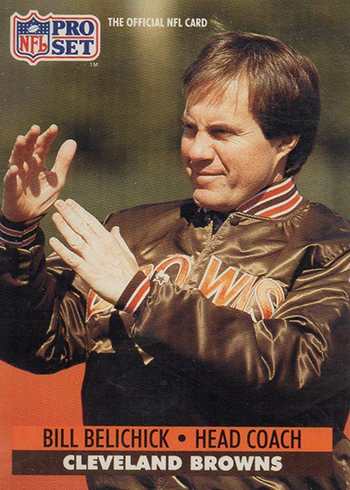 The Butterfly Effect can be used to explain, justify or excuse any series of events. If one thing happened, it made something else possible. If another event didn’t happen, it meant another one could. It’s cause and effect taken, potentially, to the extreme. And if you’re a Patriots fan, then February 15 is of particular importance.

That was the day in 1996 that Bill Belichick was fired by the Cleveland Browns team that was in the process of becoming the Baltimore Ravens.

And with that, Belichick moved to the New England Patriots for a year as assistant coach, which likely influenced the team’s decision to make him head coach in 2000. And the rest is history–and a lot of Super Bowl rings.

Generally speaking, Rookie Cards of head coaches don’t get a lot of attention. Bill Belichick isn’t your average coach, though. His 1991 Pro Set card has become one of the most popular in the set.

This is one of two Bill Belichick Rookie Cards. He’s also in 1991 Pro Line Portraits (sadly, without Zubaz).

Neither are going to make you rich, although high-grade copies may surprise you a little considering the sets of origin and their ample supply.

While these are Belichick’s first traditional cards, you can go back to 1979 and 1981 for a pair of 8 x 10 team-issued New York Giants sheets for his ephemera debut.