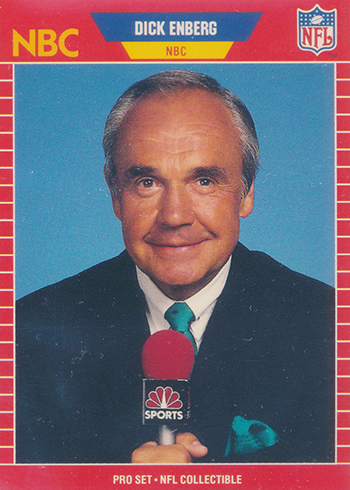 Dick Enberg, one of the most beloved and prolific voices in the world of sports, has passed away. He was 82.

Enberg’s on-air career dates back to the 1960s when he got his start with college sports.

By the time he stepped down as the play-by-play announcer of the San Diego Padres in 2016, Enberg had worked in numerous places including NBC, CBS and ESPN. He wasn’t limited to a single sport either. Enberg called baseball, football, the Olympics, tennis and more.

Basically, if you’ve watched sports over the past 50 years, Enberg, along with his “Oh, my!” catchphrase, has probably been a part of it in some way.

Enberg has just a handful of cards, most of which are on the rare side. One that isn’t can be found in 1989 Pro Set Announcers. Inserted in packs of 1989 Pro Set Series II Football, the 30-card set features voices from several networks.

If you’re looking for something on the rare side, there’s a 1990-91 Hoops Announcers set that Enberg is a part of. These were given to the announcers to hand out as they wished and not included in packs.