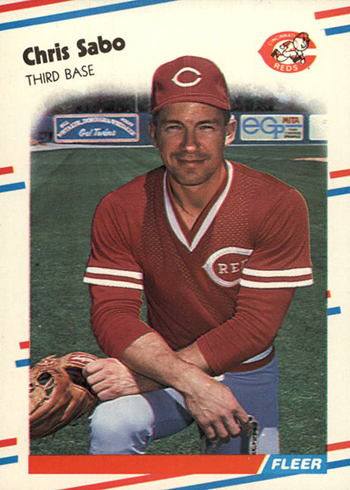 Has it always bugged you that nobody figures out that Clark Kent is Superman just because of a pair of glasses? Yes, the comics have explained it, but comics also find ways to bring everybody back to life so whatever that explanation is about Kent’s secret identity is still odd.

But then the 1988 Fleer Update Chris Sabo pops up–perhaps the only card to feature him without his trademark goggles. And it’s a total Clark Kent-Superman situation. He’s not recognizable.

And for a generation who grew up watching Sabo on TV and seeing him shuffling through stacks of 1990 Donruss, 1989 Topps and 1991 Upper Deck (especially that team card), it’s weird. It’s like Linus without his blanket, the Fonz without a leather jacket or Laverne without an ‘L’ on everything she wore.

Today, it’s Chris Sabo’s 56th birthday. The 1988 National League Rookie of the Year put together a solid career that included three trips to the All-Star Game and a World Series ring. It was by no means a Cooperstown-esque trip through the majors but Sabo was solid.

He had some big moments, like Game 3 in the 1990 World Series when he hit a pair of home runs:

There was also moments like this one in 1996 when Sabo got caught with a corked bat: Sabo got a seven-game suspension for the incident, although he disputed he knew it was in there.

As for Sabo’s cards? They peaked early. That’s what happens when you’re one of the big rookies during the peak of the hobby boom and speculation is high. Besides Fleer Update, Donruss, Score and Topps also include Sabo in their 1988 traded sets.