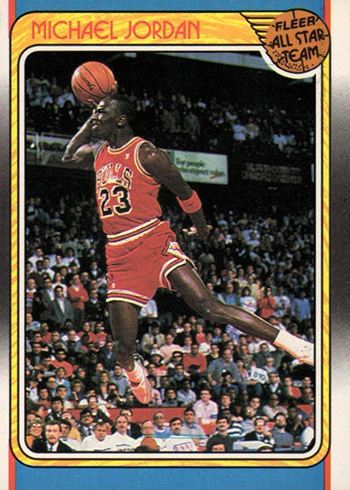 Twenty-nine years ago today, Michael Jordan scored his 10,000th career point. That’s less than a third of his career total of 32,292, but a reminder that Jordan was something special.

The Bulls were still a couple of years away from their first NBA Championship but Jordan was quickly becoming a basketball icon. The Air Jordan line was hitting its stride. The unmistakable Jumpman logo was new, having debuted in 1988’s Air Jordan IIIs.

Yes, Michael Jordan was more than just a thing. Little did a lot of us know at the time, there was a lot more to come in the years and decades that followed.

1988-89 Fleer Basketball marked the company’s third year making cards. Jordan’s regular card in the set carries more value and prestige than this All Star Team card. But this one’s special too because of the history on display. Before the championship rings and big-screen showdown with the Monstars, there was the Slam Dunk Competition.

February 6, 1988 in Chicago was the stage. Jordan and Dominique Wilkins were the stars and they didn’t disappoint. It went down to the end, but Jordan’s foul line take off landed him a perfect score to win it. And, like that, a legend was cemented.

The shot of Jordan flying through the air at the competition has been shown in plenty of places from plenty of angles over the years. But when it comes to basketball cards, this looks to be the card to do it first. It makes no mention of the contest on the card, but if the pose doesn’t give it away, the background does. If you turn on the Where’s Waldo? part of your brain go searching original images from the competition (like this one), some familiar faces start showing up. These photos may be taken from different angles so it is a little more tricky than it seems.