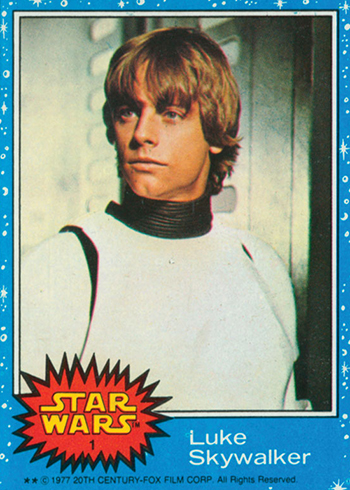 Hands up if you’re preparing yourself for a long lineup this weekend? Although Star Wars: The Last Jedi doesn’t officially open until Friday, that’s just a thing to write down on paper. Tonight’s the real opening night.

Forty years ago, Luke was a young man fresh off the moisture farm. There have been dozens of sets of Star Wars trading cards over the years, but, for millions, the blue starfield border is the one that started it all.

And this is the card that kicked things off.

All of the 1977 Topps Star Wars sets continue to be strong on the secondary market (including the infamous C-3PO). High-grade Series 1 singles in particular are doing big business. This shouldn’t be surprising considering how the franchise continues to find a way to be bigger and bigger. And when it comes to Star Wars merch, the Series 1 trading cards have to be seen as some of the most iconic outside of action figures.