Twenty years ago the first Contenders football product launched. Playoff started a product that would last decades with some of the most celebrated football rookies on cards.

Over the next couple of years, Donruss released cards of rookies on unique insert designs, looking to find something that would resonate with collectors.

Then came 1998 – the debut of Rookie Contenders Ticket, an autograph subset that became a mainstay even under Panini America.

That first set featured 99 cards but only 19 of them were autographed, according to the Beckett database.

Nearly all of the top stars in the NFL over the last 15 years have had their cards featured on a Contenders Ticket. But the autograph versions are where collectors really reacted to the chase.

In 1998, players such as Peyton Manning, Randy Moss and Hines Ward had autographed tickets. That year also had players such as Ryan Leaf. Not all winners, but still a highly collectible set as it marked the beginning of a popular set.

To this day, the Contenders Rookie Tickets are anticipated. This season highlights a fun rookie class with the likes of Robert Griffin III, Andrew Luck and Russell Wilson. Their Rookie Ticket Autographs are already going for a hundreds of dollars. 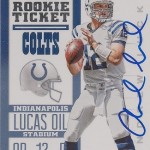 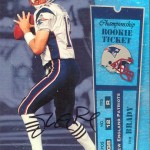 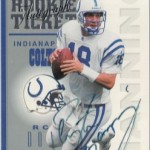 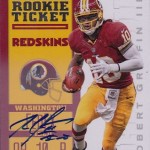