With the 2017 NBA Rookie Photo Shoot in full swing, employees from Panini America are working hard to get what they need from the new crop of prospects for the company’s upcoming basketball card releases. Part of this process is getting photography of the young stars and collectors will be able to get their hands on the first cards of them where they are in their NBA uniforms soon courtesy of 2017-18 Panini Instant RPS First Look. 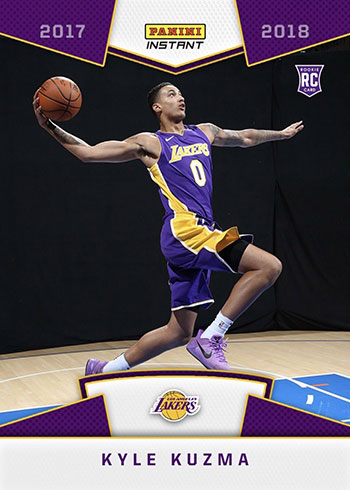 The regular version of the cards are only available for a one-week period and sell for $9.99 each. It should be noted that they will only be produced to the number of copies ordered by collectors before the deadline. Parallel versions of each player are also being made and the Green version (/10) starts at $49.99 while the one-of-one Black parallel is offered up beginning at $149.99. For some players, the Green and Black cards are being sold at a higher price. For example, the Lonzo Ball cards were listed at $99.99 for the Greens and the Black was $499.99 before they sold out within the first 45 minutes of being available. Limited cards of De’Aaron Fox, Markelle Fultz were also quickly off the market and Black one-of-ones for many players were snapped up in the first hour of sale.