After releasing some USA Baseball box sets during their first few years under license, Panini debuted Stars and Stripes in 2015. That original Stars and Stripes set was released in larger hobby boxes, containing 24 packs. In 2017 Panini changed the format a bit to the current model, which features just five packs per box. With the July the 4th happening this week, can there be a more appropriate time to bust some Stars and Stripes.

2020 Panini Stars and Stripes USA Baseball features a 100-card base set highlighting the Collegiate, 18U, and 15U National Teams. Also included are autographs and relic cards from USA Baseball national teams all the way from the college ranks, down to their 14 and under development teams. As printed on the box, an average hobby box has five autograph or memorabilia cards. 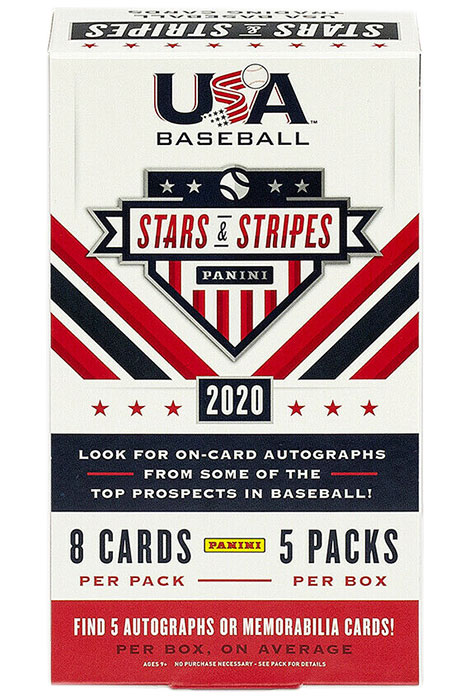 Pack 1 fun fact: The No. 3 overall pick in the 2020 draft, Max Meyer used a triple-digit fastball and a wipeout slider to strike out 46 of the 110 batters he faced this spring. He also allowed just 15 hits for a .155 opponents’ batting average. 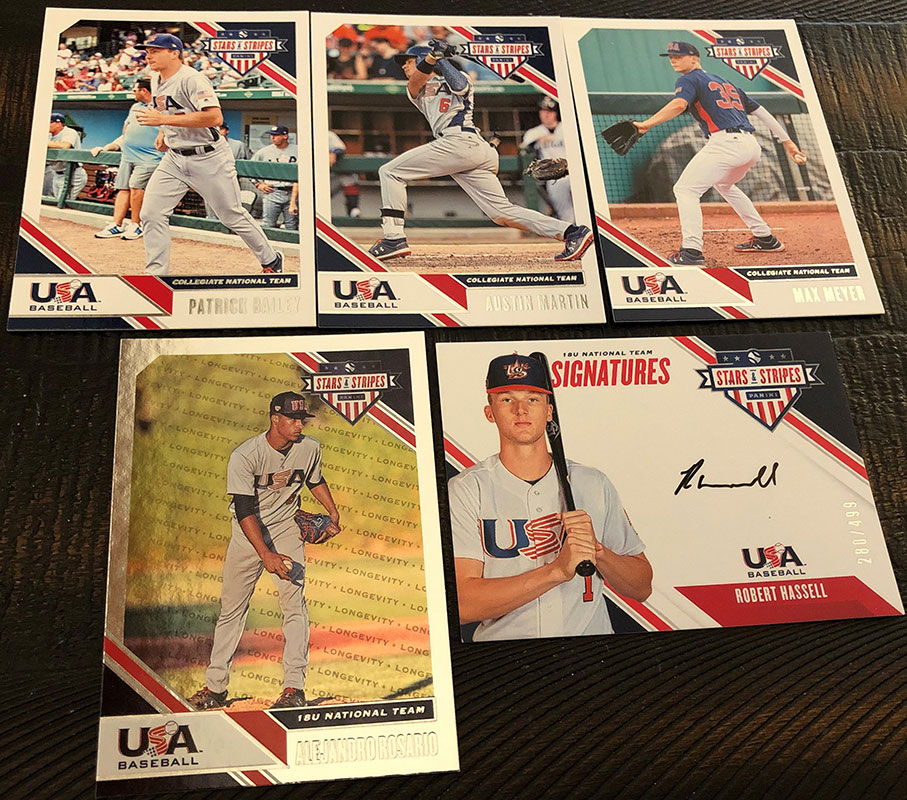 Pack 2 fun fact: Spencer Torkelson shattered the Arizona State school record with 25 home runs as a freshman, eclipsing the previous mark of 11 set by Barry Bonds in 1983. He hit another 23 as a sophomore and had six in 17 games this spring. 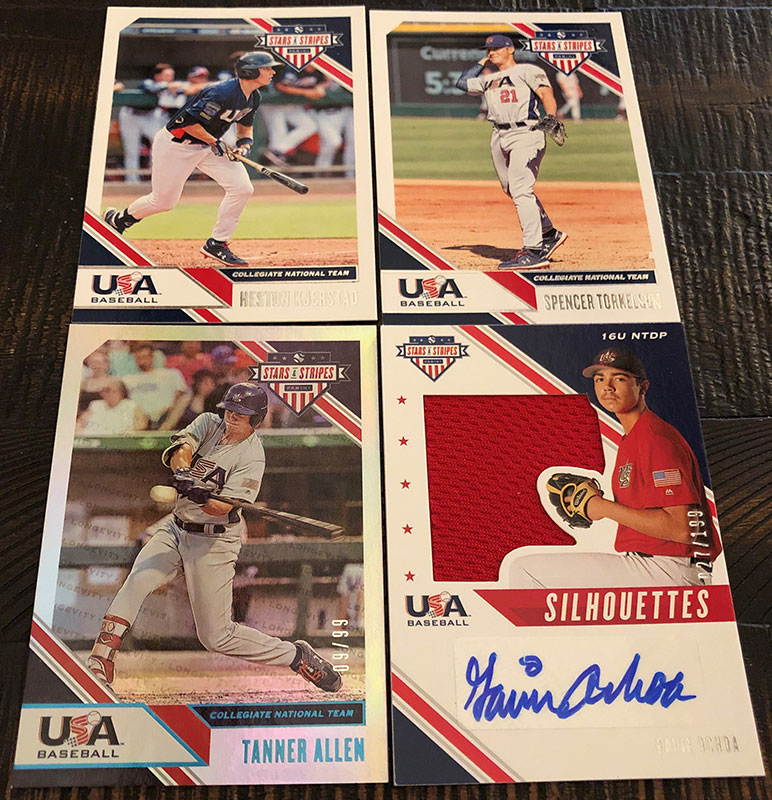 Pack 3 fun fact: The Atlanta Braves selected Shea Langeliers (No. 9 overall) and Braden Shewmake (No. 21 overall) both in the first round of the 2019 MLB draft. 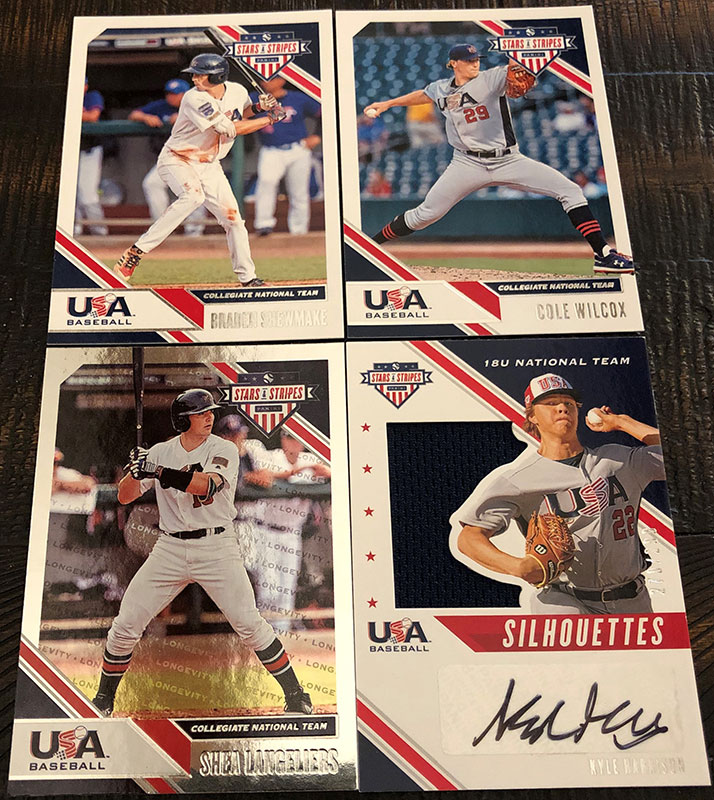 Pack 4 fun fact: Asa Lacy allowed just nine hits and eight walks while striking out 46 of the 93 batters he faced this spring. The 6’4” left-hander joined Bobby Witt Jr. in a Kansas City Royals farm system on the rise when he was taken No. 4 overall in June. 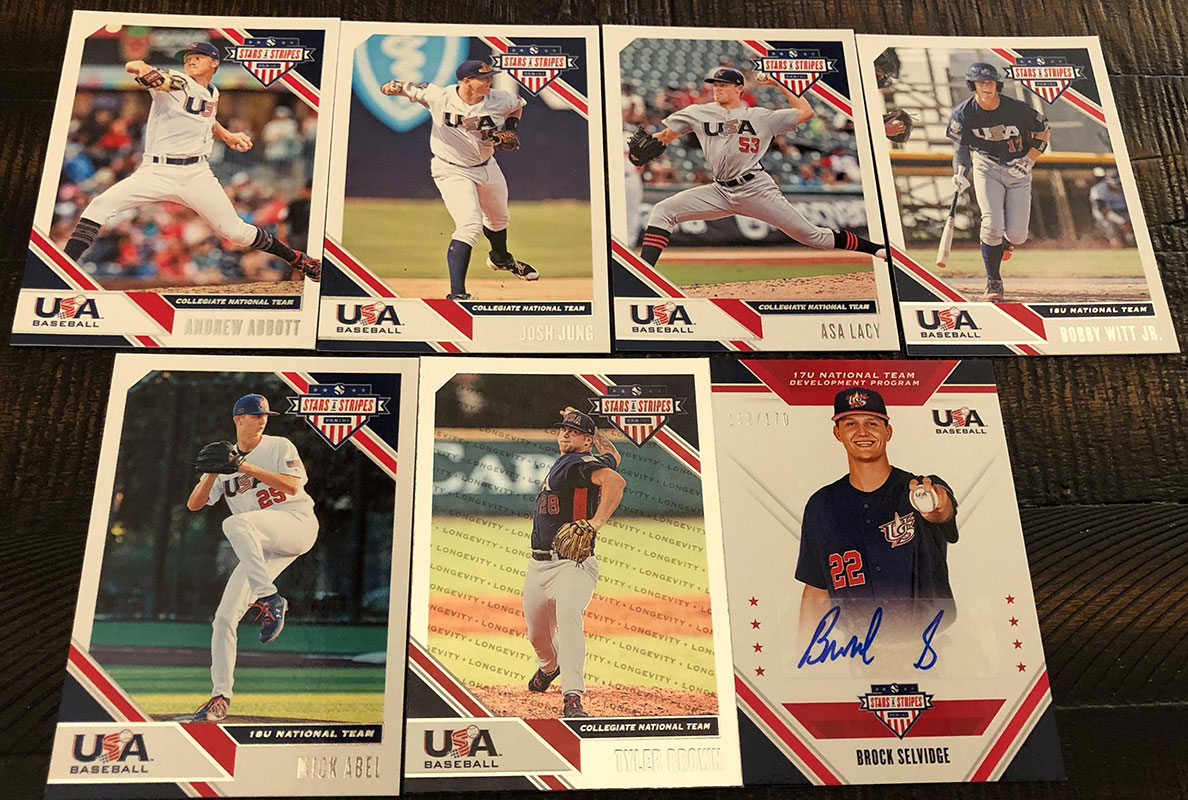 Pack 5 fun fact: Austin Hendrick was widely regarded as having the best raw power among this year’s crop of high school hitters. He nabbed a $4 million bonus as the No. 12 overall pick by the Cincinnati Reds. 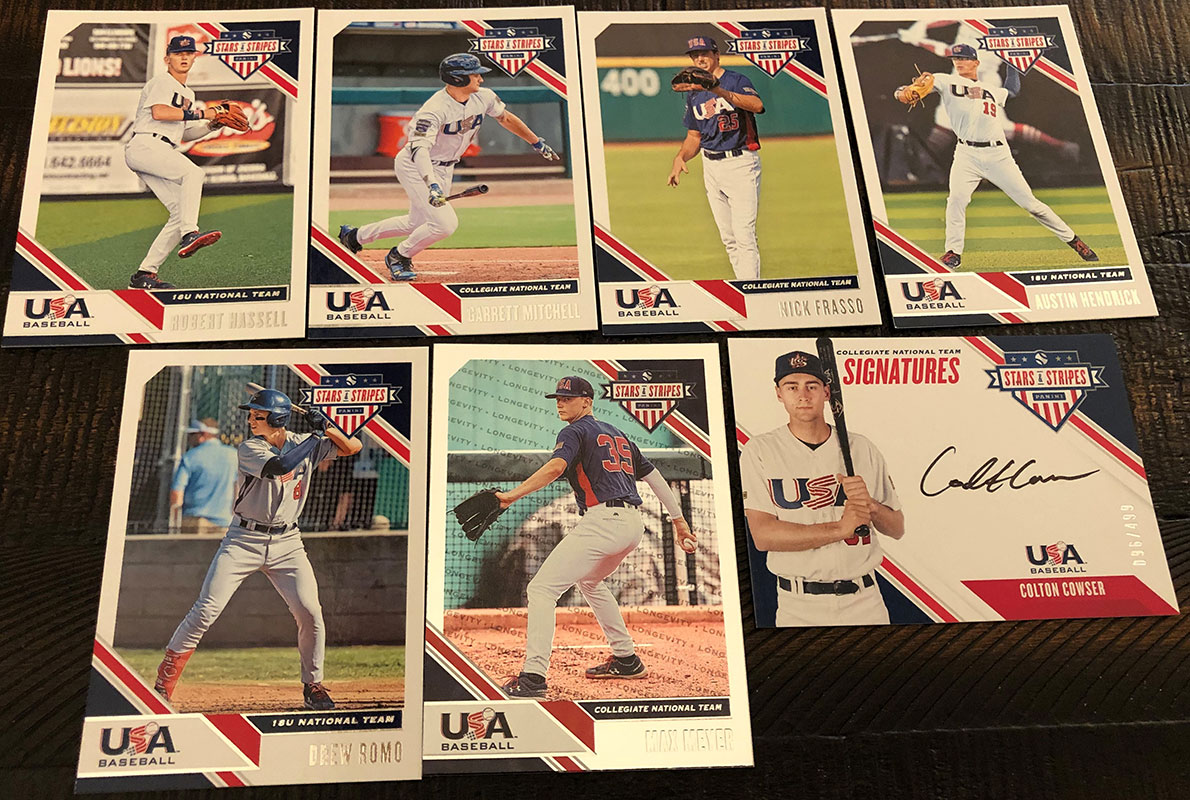 Lastly, the Garrett Mitchell card back. Mitchell was just drafted by the Brewers with the 20th pick in the first round of the 2020 MLB Draft. 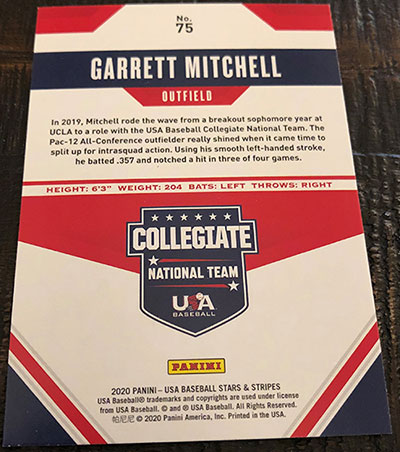 The knock you most often see on this product is in regards to the inclusion of players that are barely into high school. While I do understand that, and had certainly never heard of my 16U autograph of Gavin Ochoa, the potential is there. USA Baseball has a long history of alumni continuing on to major league success. For instance, I did a quick check of the 2010 16U National Team roster and a few names certainly stick out. Alex Bregman, Albert Almora, Matt Olson and Corey Seager all played on that team when they were 16-year olds. This product gives you the opportunity to pull early autographs of potential future stars. To me, that is worth the price. It also made this year’s MLB Draft a lot more interesting.

Shop for 2020 Panini Stars and Stripes Baseball cards on: