Hot Prospects Baseball was a Fleer release that ran for just three years, from 2002 to 2004. Considered a premium product, the base cards are a thicker card stock and feature an advanced design. The 2003 Hot Prospects set consists of just 80 regular base cards plus another 35 hits-based cards that are a mix of Future Swatch jersey cards, Certified Cuts autographs, and Game Graphs. The cards are actually numbered up to #119, but four cards (88, 96, 106 and 108) do not exist.

On release day these packs were priced at $12 a piece! Obviously, I did not pay nearly that much. 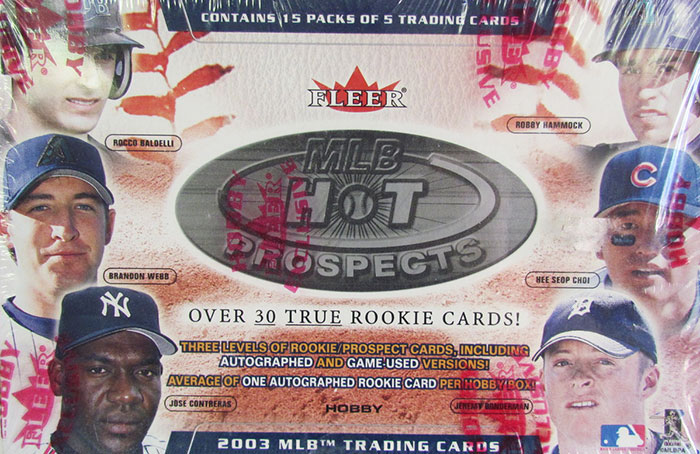 Now, first things first. You may be looking at the box of this product, titled Hot Prospects and wondering where all the “hot prospects” are. Baldelli, Webb, Contreras, Hammock, Choi and Bonderman aren’t exactly household names. You could certainly argue that none of these players lived up to the hype. Keep in mind, though, that Baldelli (now manager of the Minnesota Twins) was the #6 pick out of high school in 2000. He debuted in the majors in 2003, and had two very solid seasons before an illness really affected his ability to play the game. Brandon Webb was also a very good major league pitcher from 2003-2008, including winning the 2006 NL Cy Young Award, before arm troubles ended his career far too early.

The names to look for in the autograph and relic portion of the base set are Mark Teixeira, Shane Victorino, Hideki Matsui (which is actually just a base Rookie Card numbered to 1250, the only one in the product) and Dontrelle Willis. The prospects in 2003 Hot Prospects did not end up being very, you know, hot.

As you scroll, you may notice a fun, new addition to the series. Along for the ride starting with this week’s edition of Cheap Wax Wednesday is Bleacher Report National MLB Columnist Joel Reuter. Below each pack reveal, he’s provided a fun fact about one of the players pictured. You can follow Joel on Twitter (@JoelReuterBR) and check out his work at Bleacher Report. 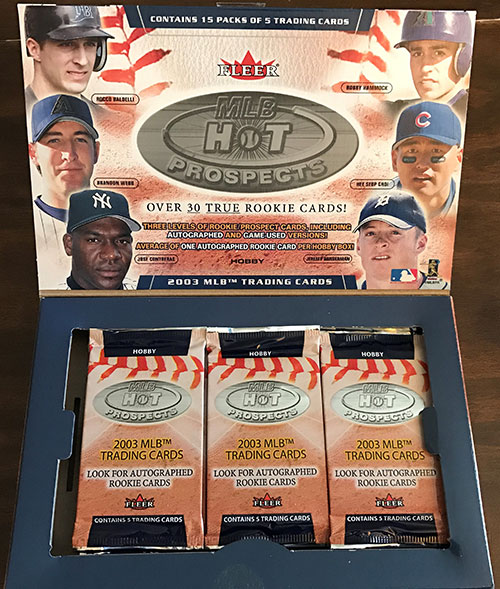 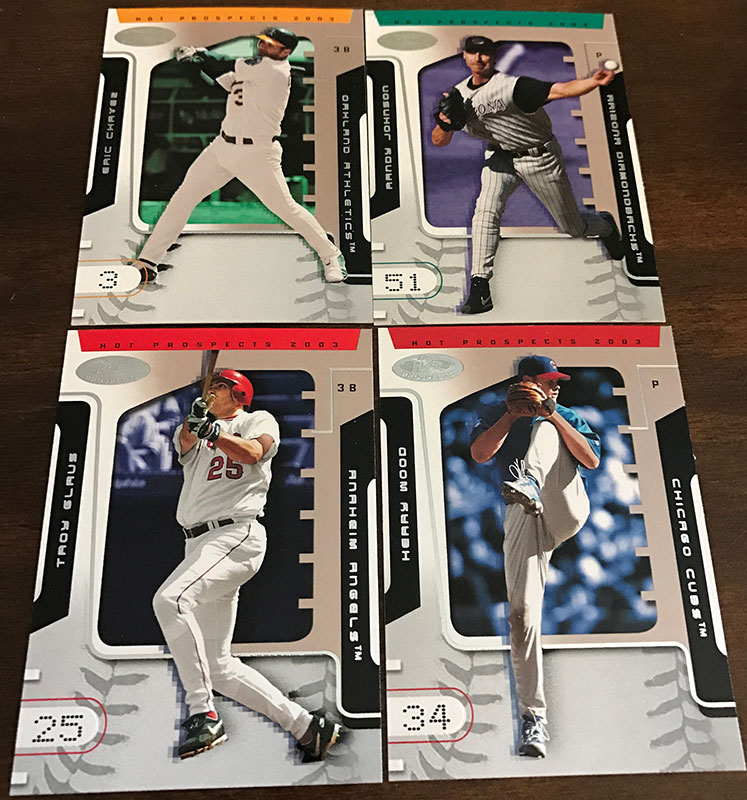 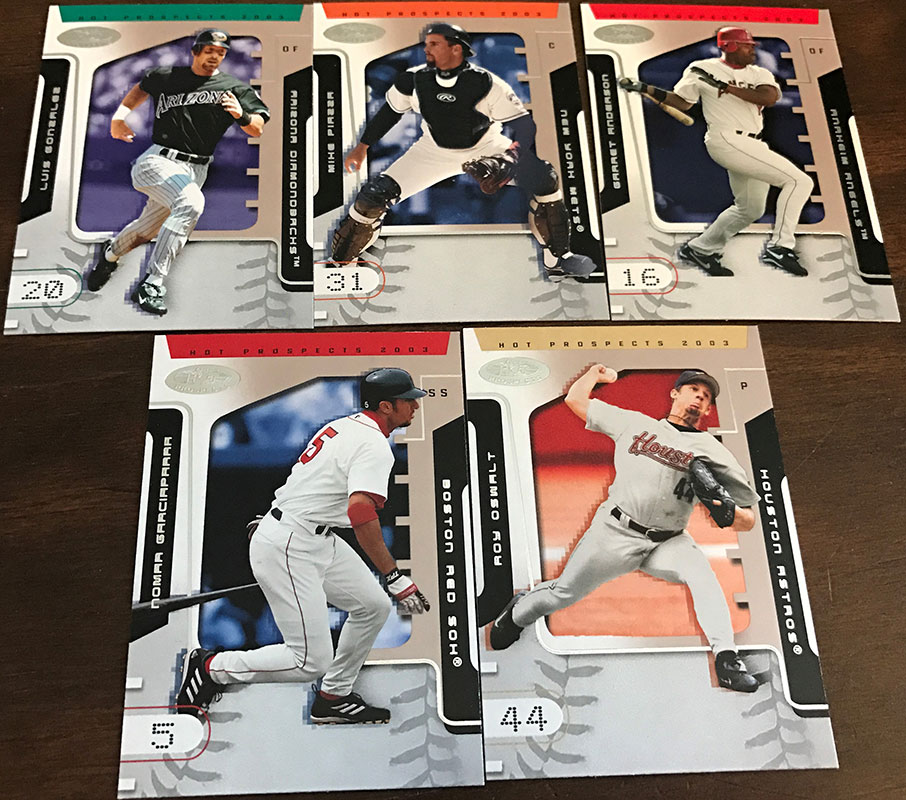 Pack 3 fun fact: Todd Helton served as the backup quarterback to an exciting young freshman named Peyton Manning at the University of Tennessee in 1994. In limited action, he completed 36-of-66 passes for 406 yards, two touchdowns and three interceptions. 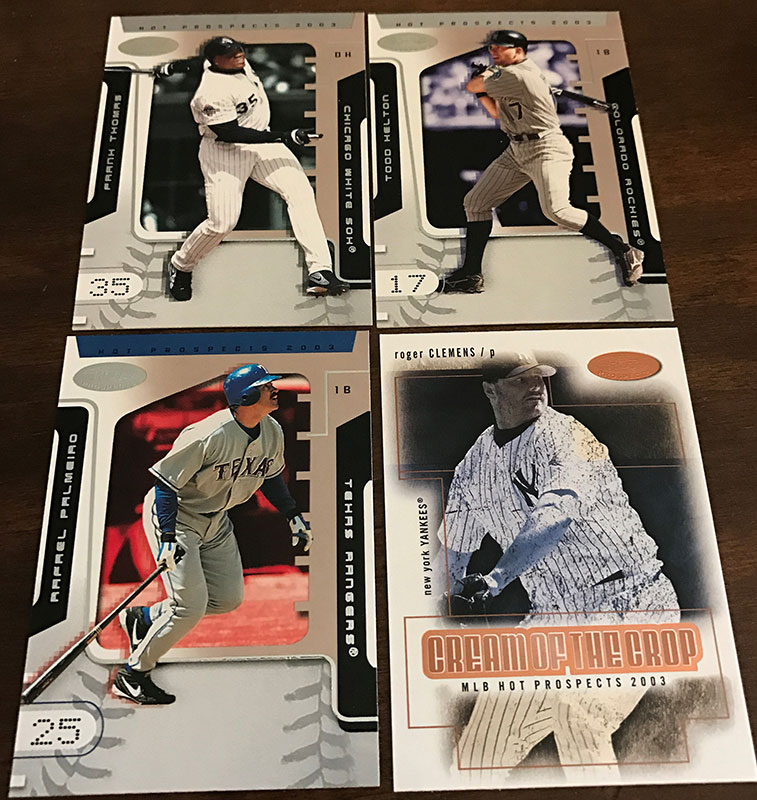 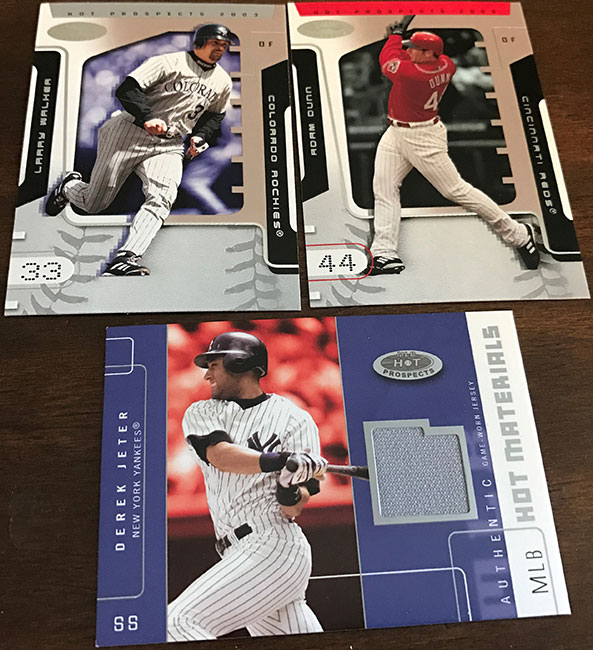 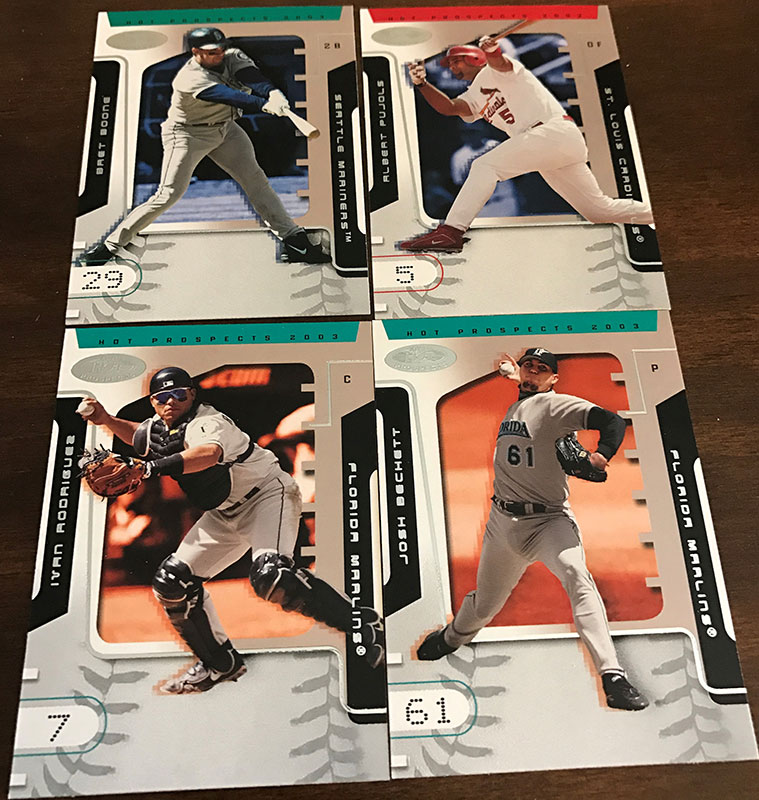 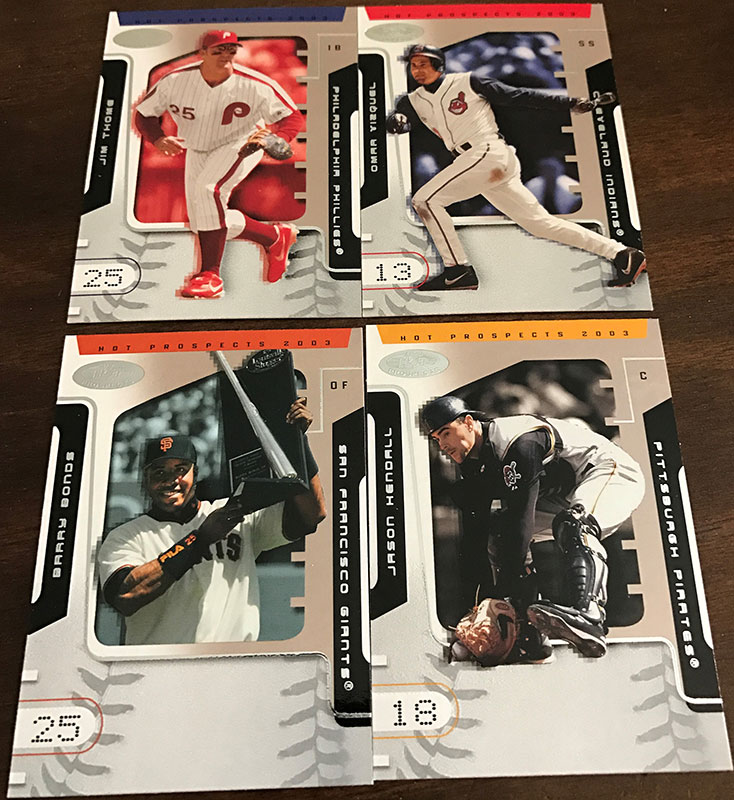 Pack 8 fun fact: Ben Sheets gave up just one run in 22 innings for the 2000 USA Olympic team that took gold at the Sydney games. He had not yet made his MLB debut at the time. 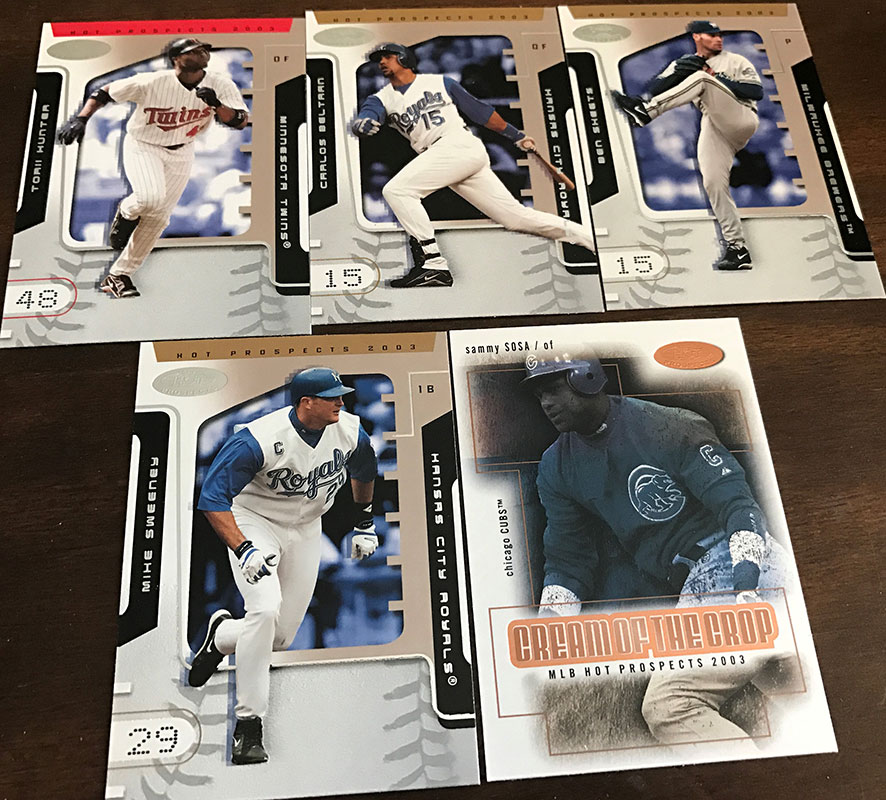 Pack 9 fun fact: Jesse Foppert posted a 5.03 ERA in 111 innings as a rookie in 2003, then pitched just 11.1 more innings total at the MLB level. The Giants eventually used him to acquire Randy Winn from the Seattle Mariners at the 2005 trade deadline. 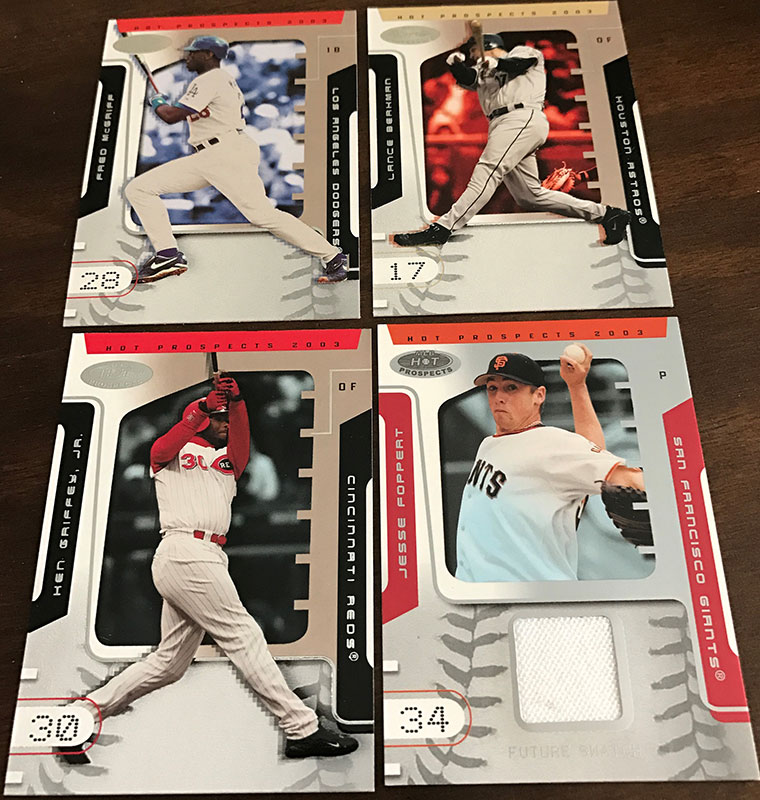 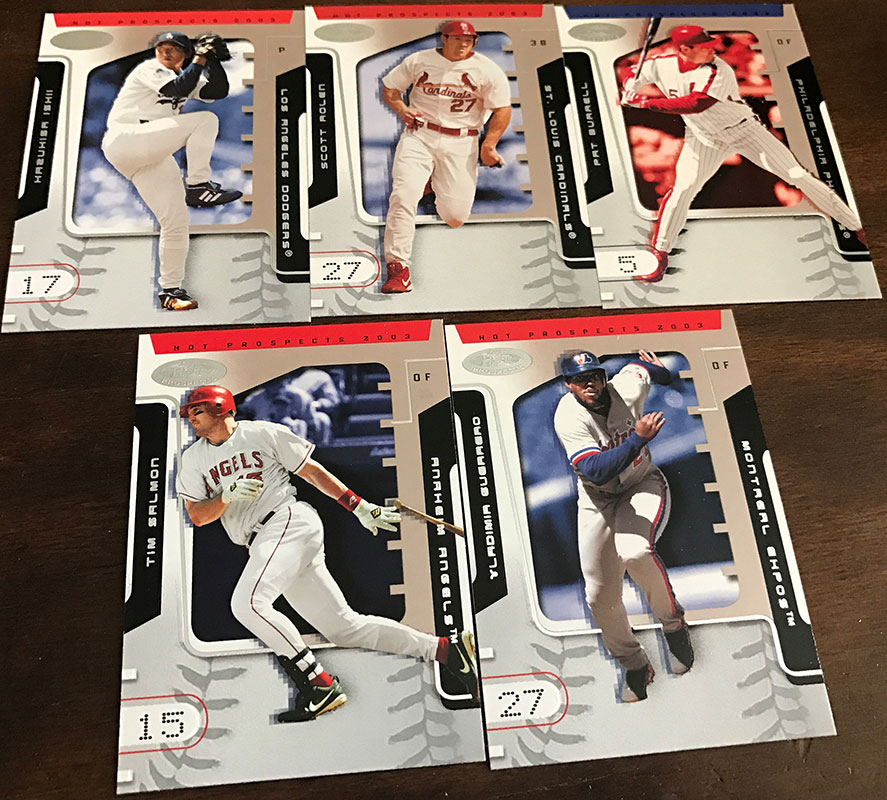 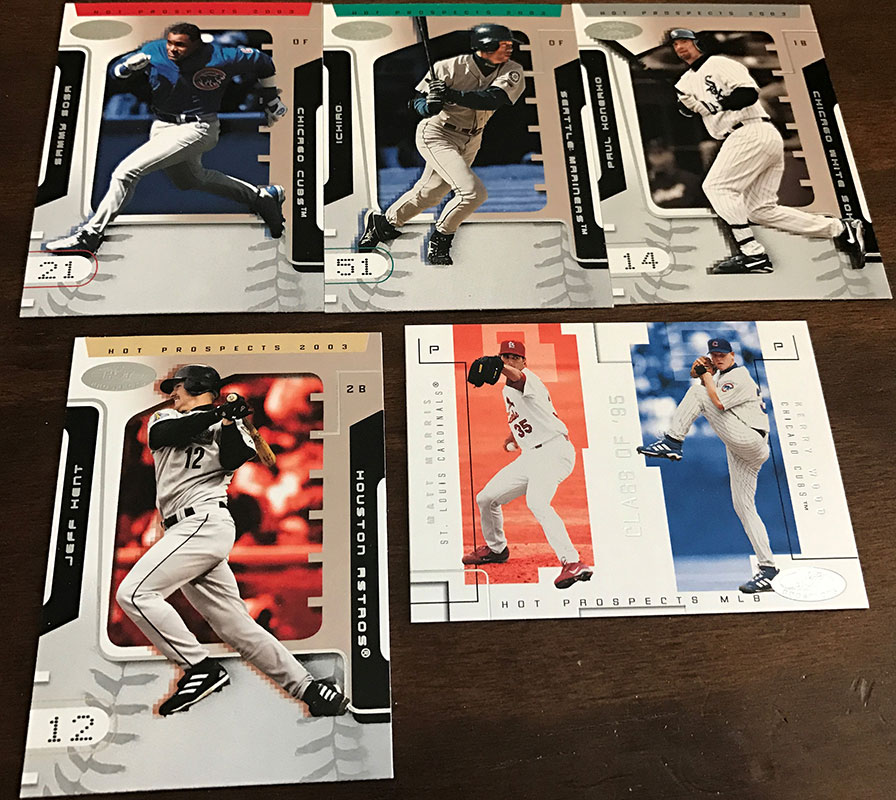 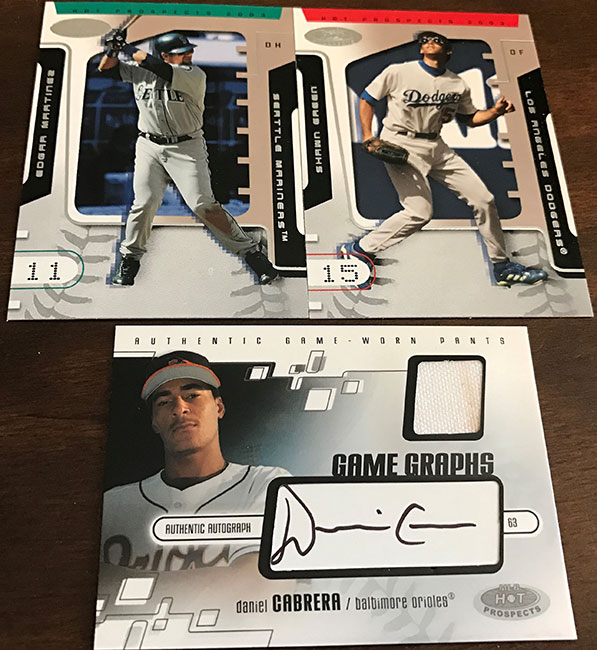 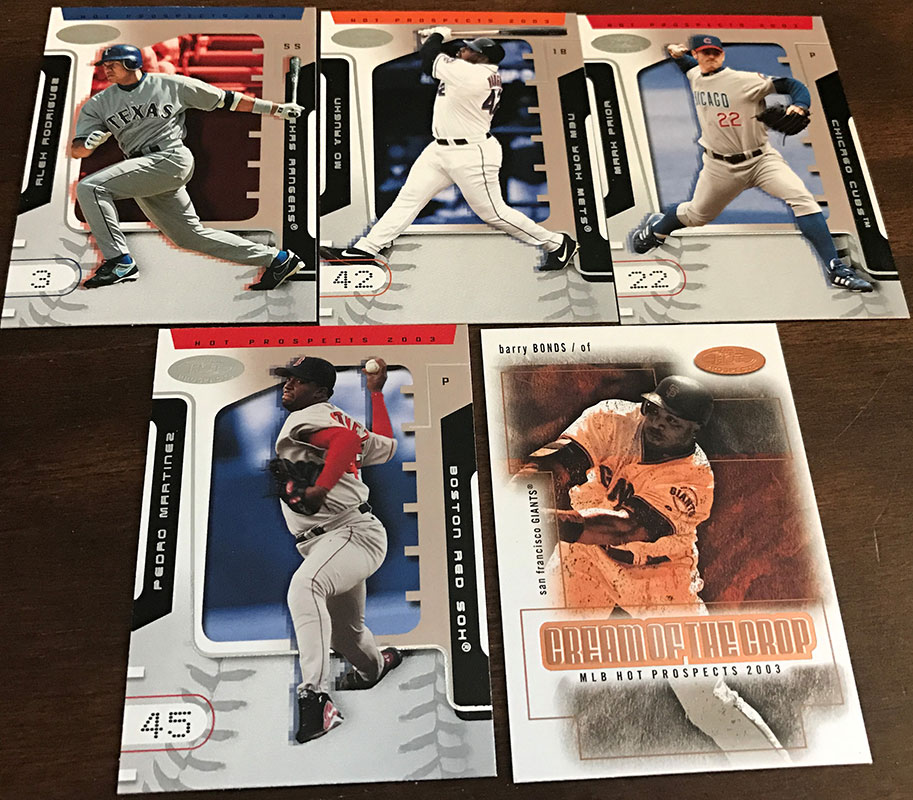 Pack 14 fun fact: Gary Sheffield was traded from the San Diego Padres to the Florida Marlins midway through the 1993 season. Hall of Fame closer Trevor Hoffman went the other way in that deal. 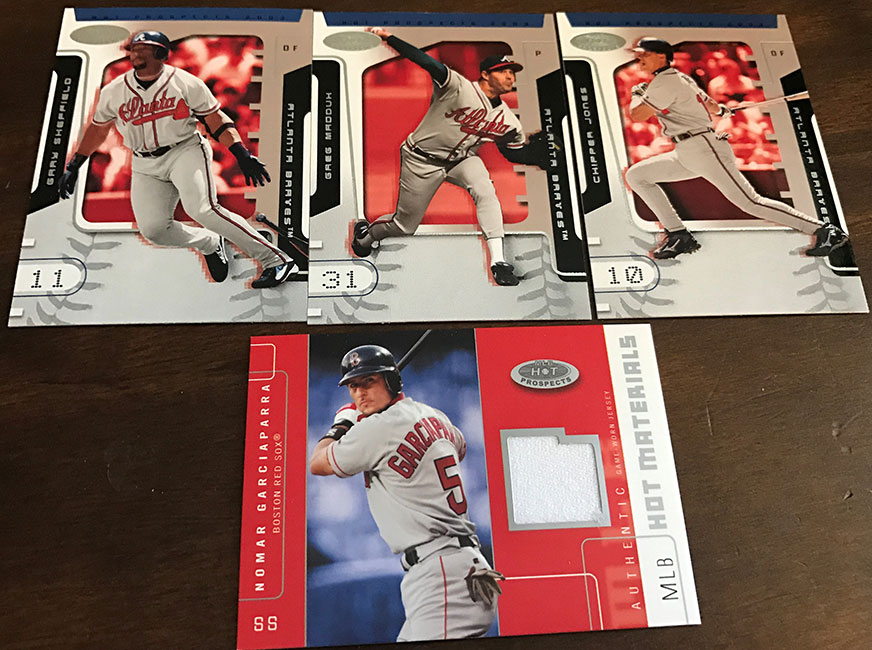 Pack 15 fun fact: Bobby Abreu was chosen by the Tampa Bay Devil Rays in the sixth round of the 1997 expansion draft, then promptly traded to the Philadelphia Phillies for light-hitting veteran shortstop Kevin Stocker. Whoops. 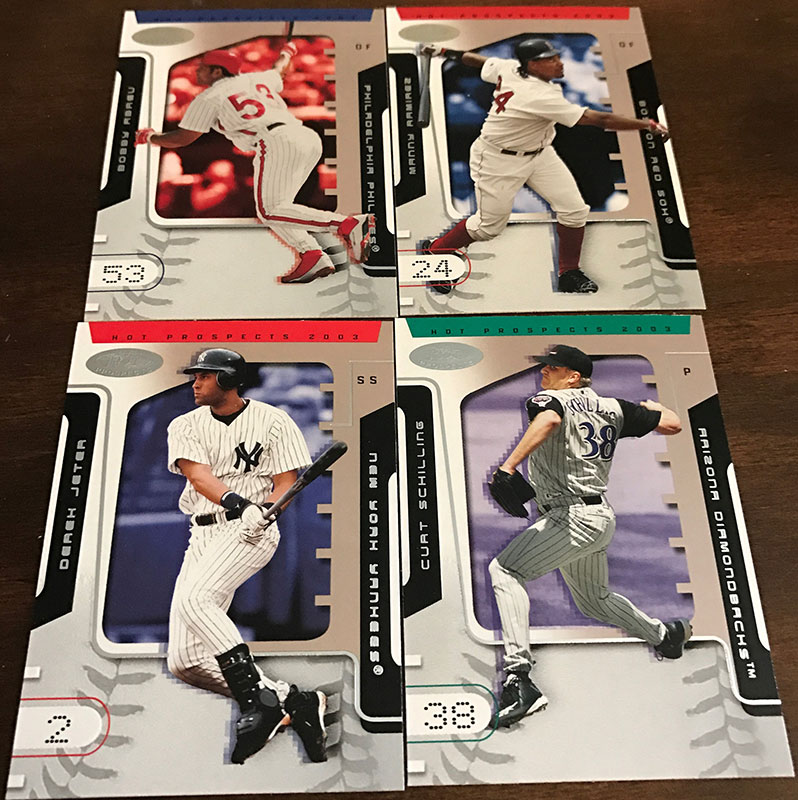 Is this a product I would be buying for $12 a pack? Absolutely not. However, 17 years later and paying just $35 a box, I would definitely give this another shot. The base set does certainly feel and look like a premium set should. The two cards I pulled from the “prospect” portion of the checklist definitely were not big names: Jesse Foppert and Daniel Cabrera. However, the two Hot Materials jersey cards I pulled were two of the best shortstops of that time, Derek Jeter and Nomar Garciaparra.

There are also some relic and autograph sets I did not see in this box. 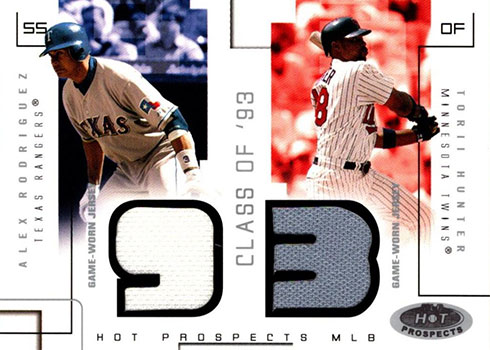 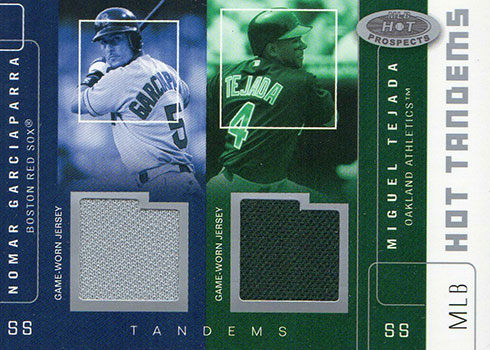 MLB Hot Triple Patch cards are tough to find and numbered to 50 copies. 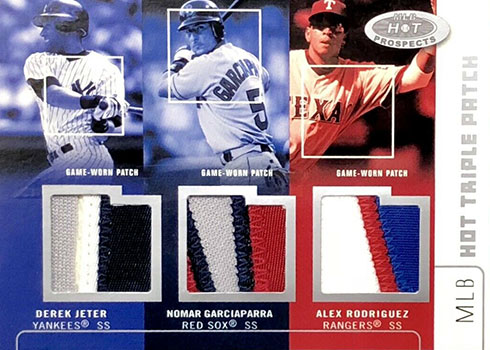 Playergraphs are autograph cards limited to 400 copies each. 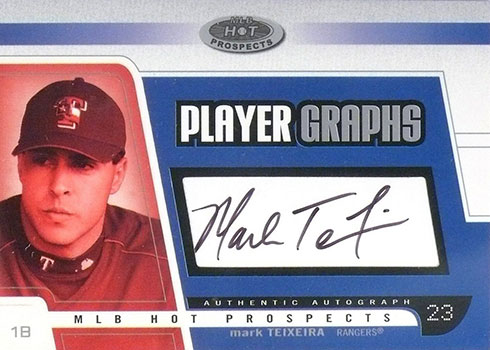 All in all, 2003 Fleer Hot Prospects a good looking set and, at this price, something worth opening.