In 2003 Donruss debuted their self-proclaimed “Ultimate Set,” Donruss Team Heroes. Team Heroes consists of a 540-card base set and includes both current and retired players. Some of the legends included in the base set even appear on multiple cards. For example, Nolan Ryan has four base cards in the set, one each for the Angels, Astros, Mets and Rangers. In addition to the base set, there are Glossy parallels, found one per pack. 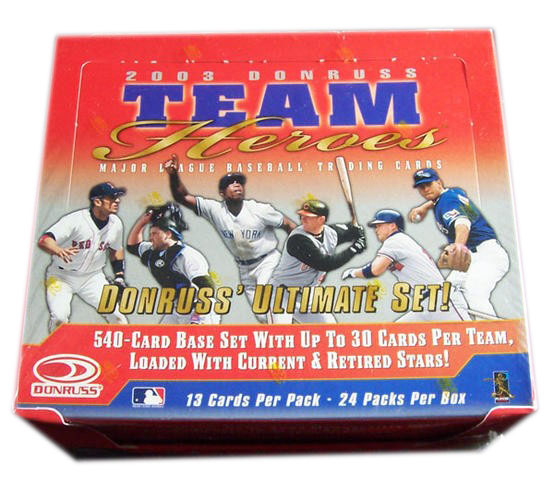 At release, packs cost about $3 each.

Also randomly included in are a couple of different redemptions. Pulling a Master Team Set redemption card would get you every card from that specific team, which is limited to just 15 sets, and foil stamped “Master Team Set” on the card front. There are also redemption cards for a complete Team Heroes Master Set, which included all 540 cards, limited to just 20 foil-stamped “Master Set” sets. If that wasn’t enough to take in, of the 20 Master Sets, ten are stamped in gold and ten in silver. Are you confused yet? Me, too.

A fan of relic cards? Timeless Threads is a 50-card relic set featuring a mix of retired legends and current star players. Lastly, and possibly the most impressive, there are 345 autographs. 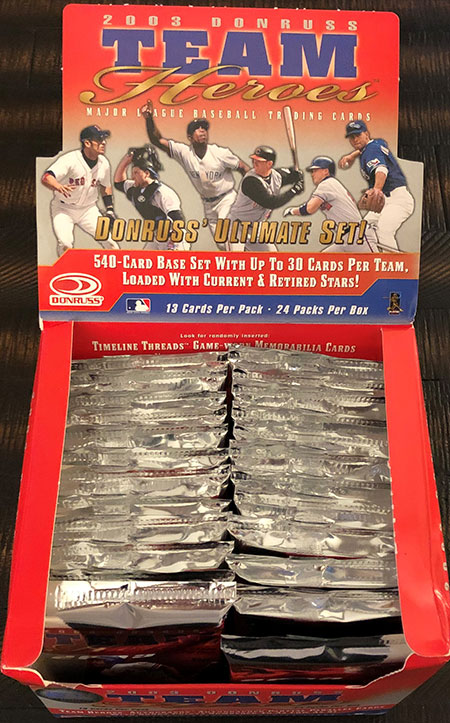 Carlton Fisk, Nolan Ryan, Will Clark & Abraham Nunez Glossy (one per pack). The Glossy parallels were sensitive to damage, as you can see the “gloss” pulling up off the base of the card.

Pack 1 fun fact: Carlton Fisk struck out 24 times against Nolan Ryan in his Hall of Fame career. That was the highest total against any single pitcher.

Pack 3 fun fact: Brandon Claussen was traded from the Yankees to the Reds in the deal that sent third baseman Aaron Boone the other way at the 2003 trade deadline. 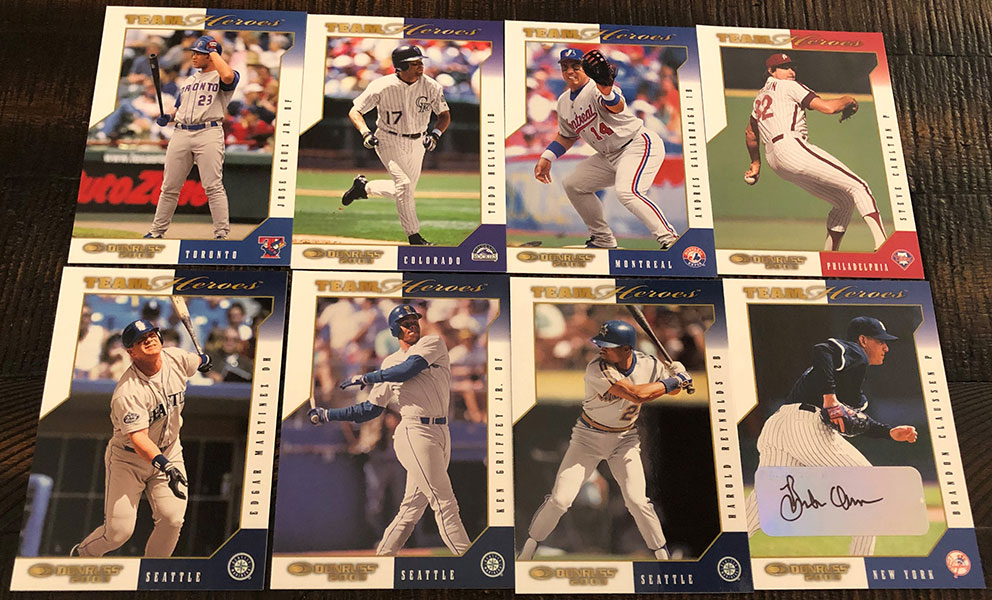 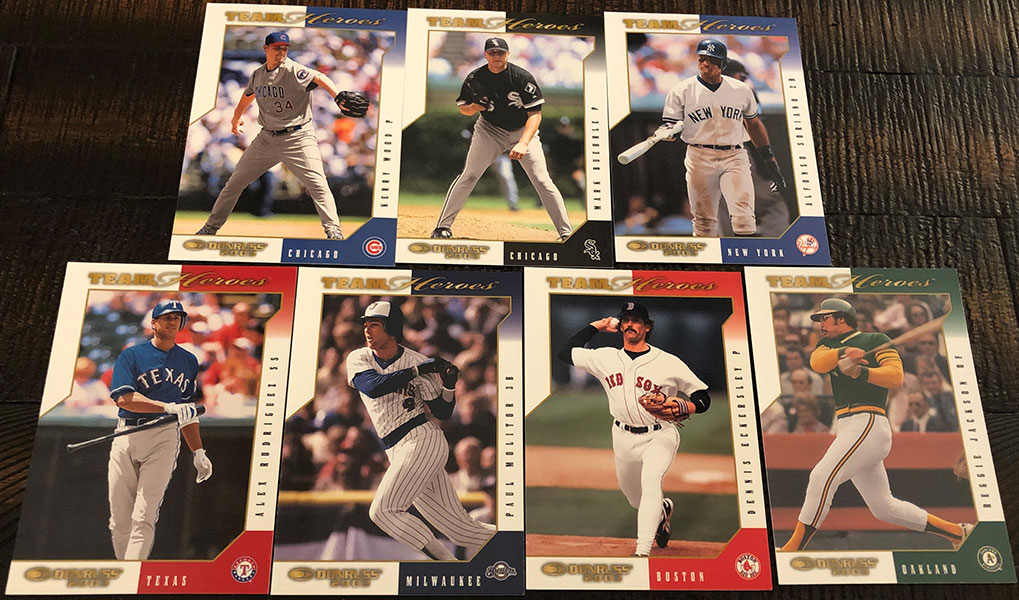 Pack 6 fun fact: Harmon Killebrew was fifth on the all-time home run list when he retired in 1975. His 573 long balls now rank 12th on the career leaderboard. 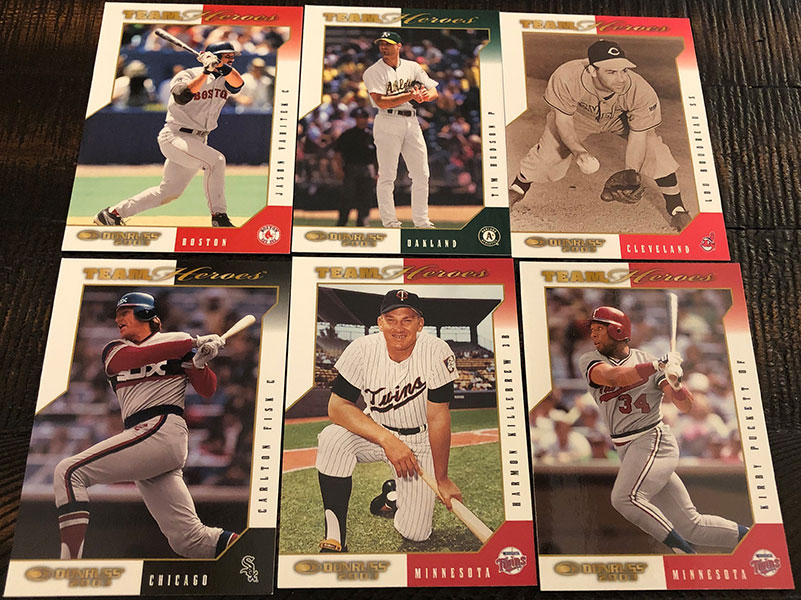 Pack 7 fun fact: Joe Torre is one of three people in MLB history to win an MVP Award and a Manager of the Year Award. He’s joined by Don Baylor and Kirk Gibson.

Pack 8 fun fact: Jason Lane played his final game as an outfielder in 2007, but returned in 2014 at the age of 37 to make one start and two relief appearances as a pitcher for the San Diego Padres. 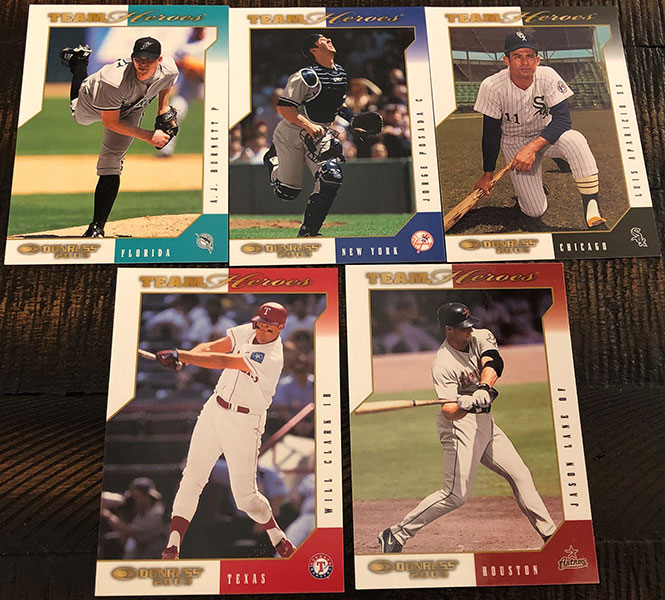 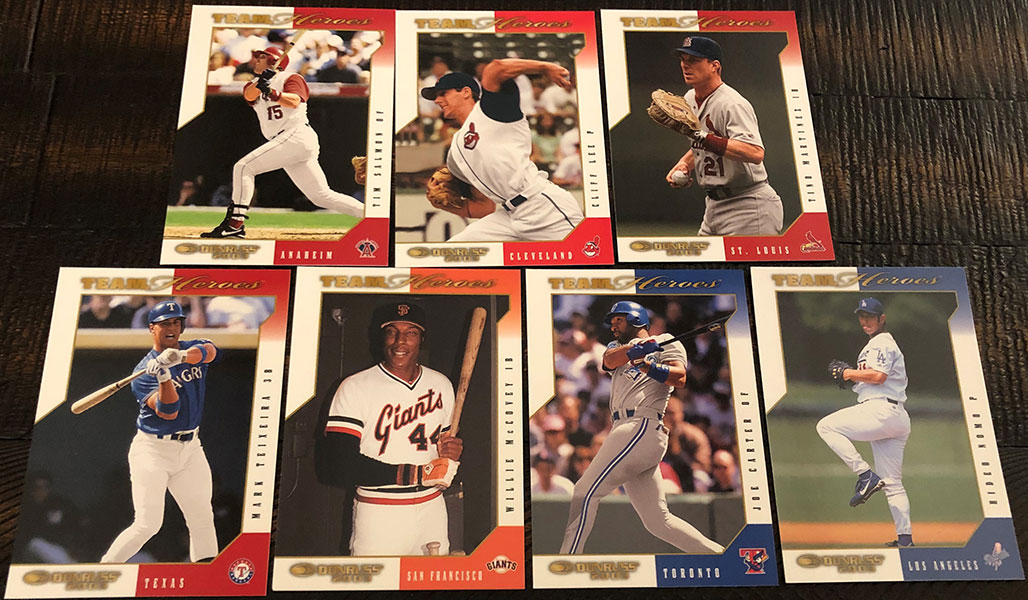 Pack 10 fun fact: Fernando Rodney was already 26 years old when this set came out. He was still pitching last season and just signed a minor league deal with the Houston Astros on July 31st.

Pack 11 fun fact: Willie Stargell won 1979 NL MVP honors at the age of 39. He remains the oldest player in MLB history to win the award, with Barry Bonds winning it when he was four years younger in his own age-39 season.

Pack 12 fun fact: Josh Beckett was the No. 1 prospect on Baseball America’s Top 100 list at the start of the 2002 season. Mark Prior, Hank Blalock, Sean Burroughs and Carlos Pena rounded out the top five. 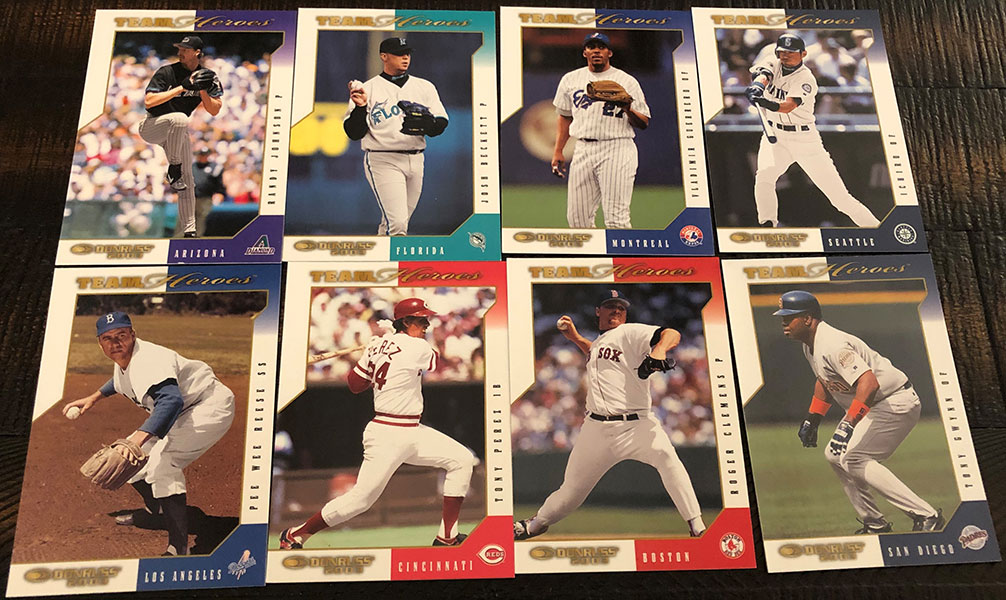 Pack 14 fun fact: Ryan Drese was part of the trade that sent a young slugger named Travis Hafner from the Rangers to the Indians prior to the 2003 season. 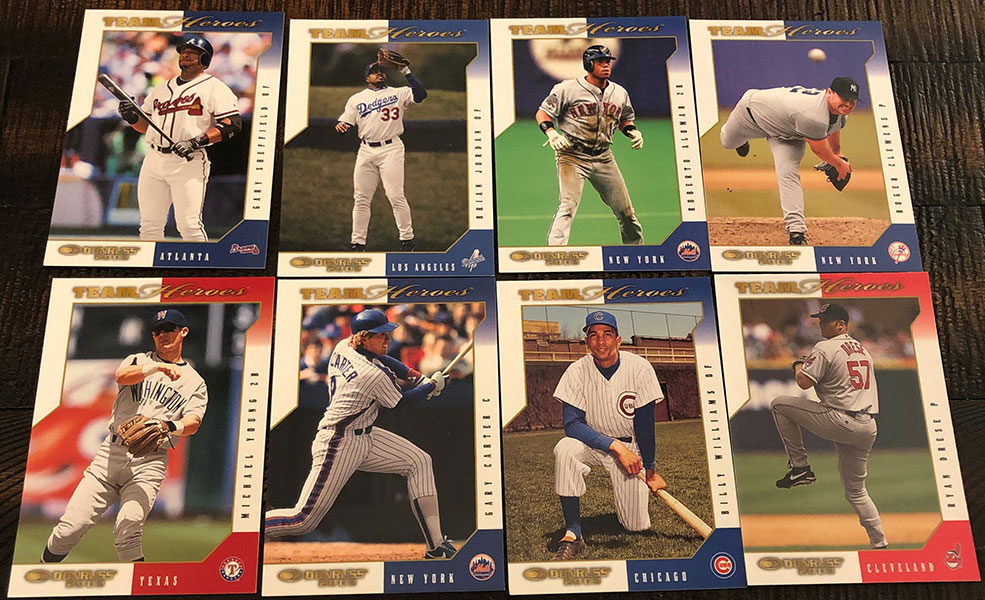 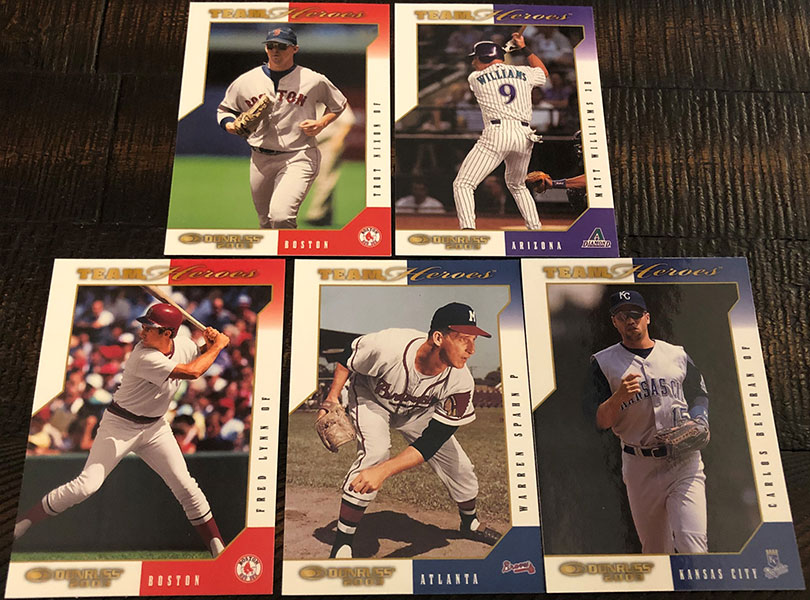 Pack 16 fun fact: Darin Erstad had 240 hits during the 2000 season, tied for 13th on the single-season leaderboard. That was a big deal before Ichiro Suzuki came along. 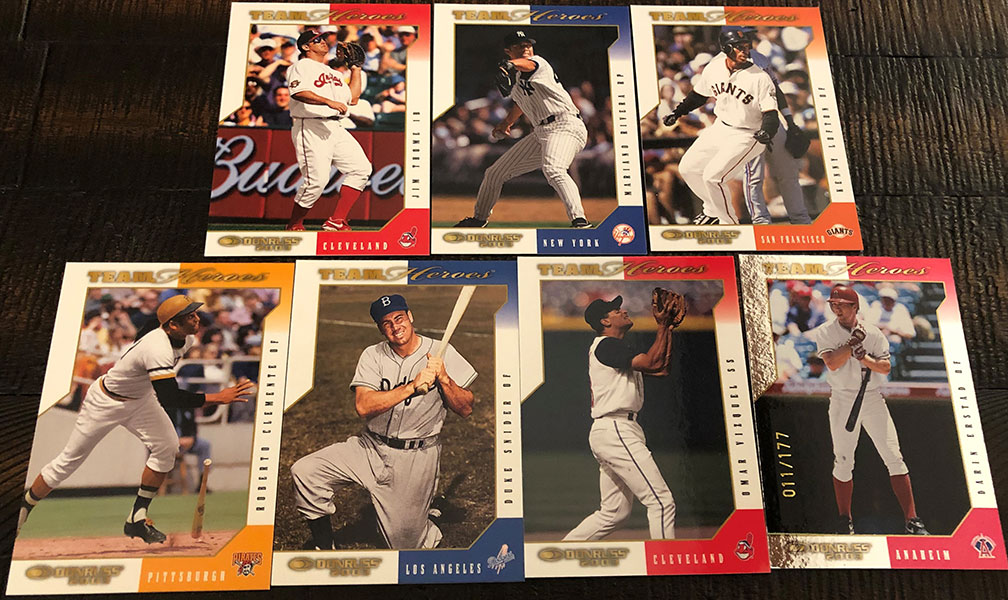 Pack 17 fun fact: Bob Feller led the league in strikeouts four times before he turned 23 years old. Had he not missed his age-23, 24 and 25 seasons serving in the Navy during World War ll, he might be talked about as the best ever. 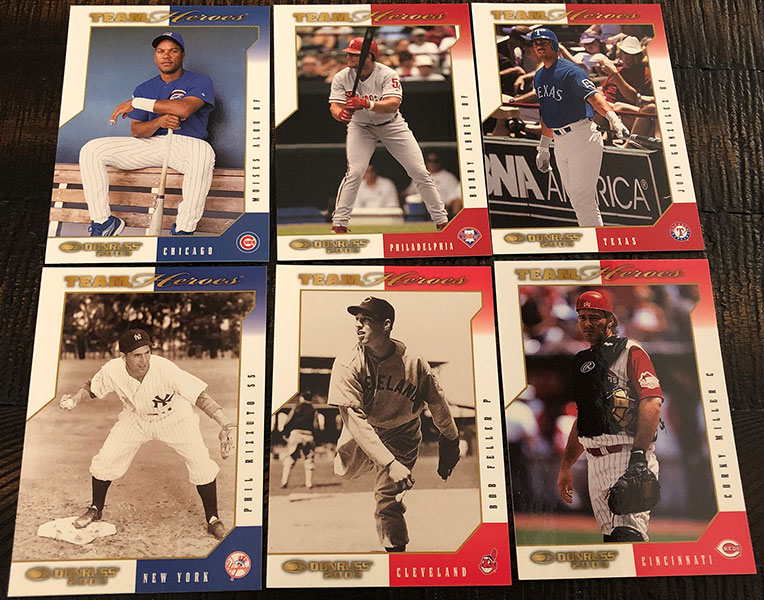 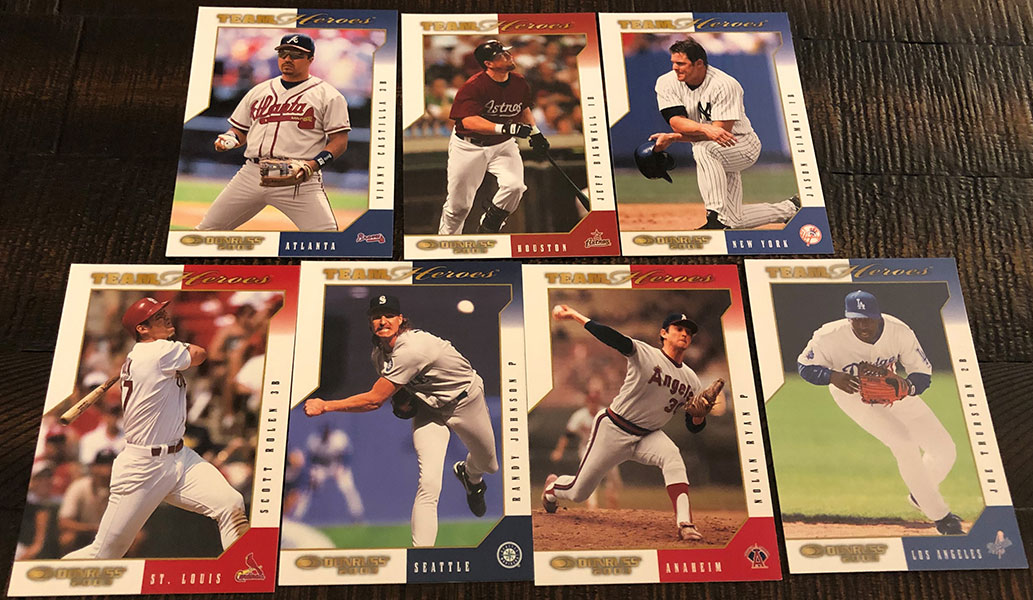 Pack 20 fun fact: Rickey Henderson played 72 games with the Red Sox in 2002 in the penultimate season of his career. He had a .369 on-base percentage and stole eight bases in 10 attempts. 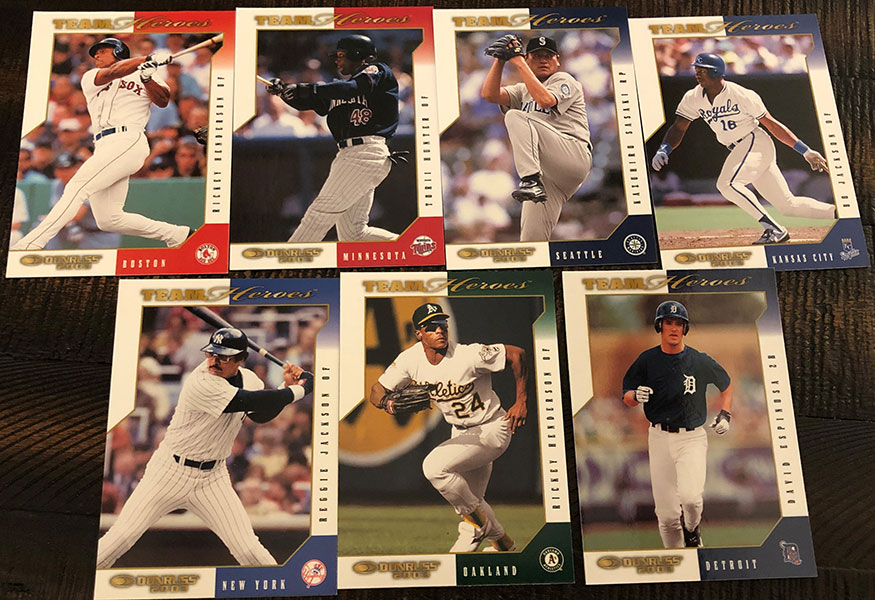 Pack 21 fun fact: In back-to-back offseasons, Mike Cameron was traded from the White Sox to the Reds for Paul Konkero, then from the Reds to the Mariners for Ken Griffey Jr. as he played a key role in reshaping the MLB landscape. 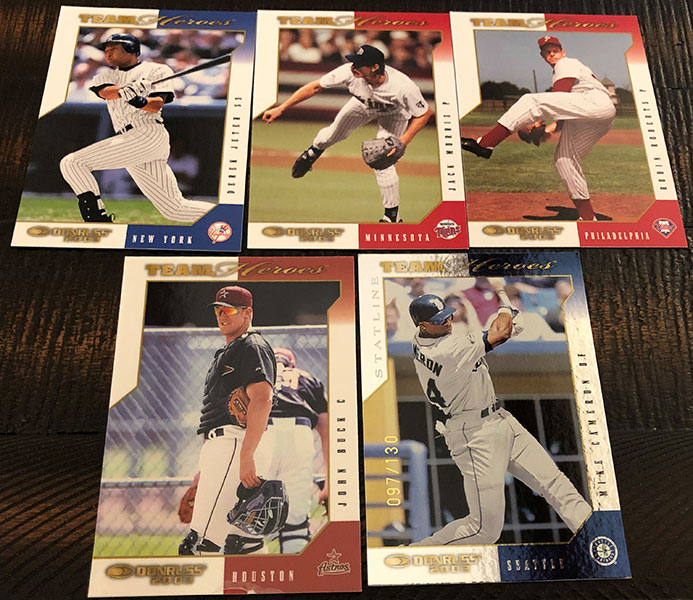 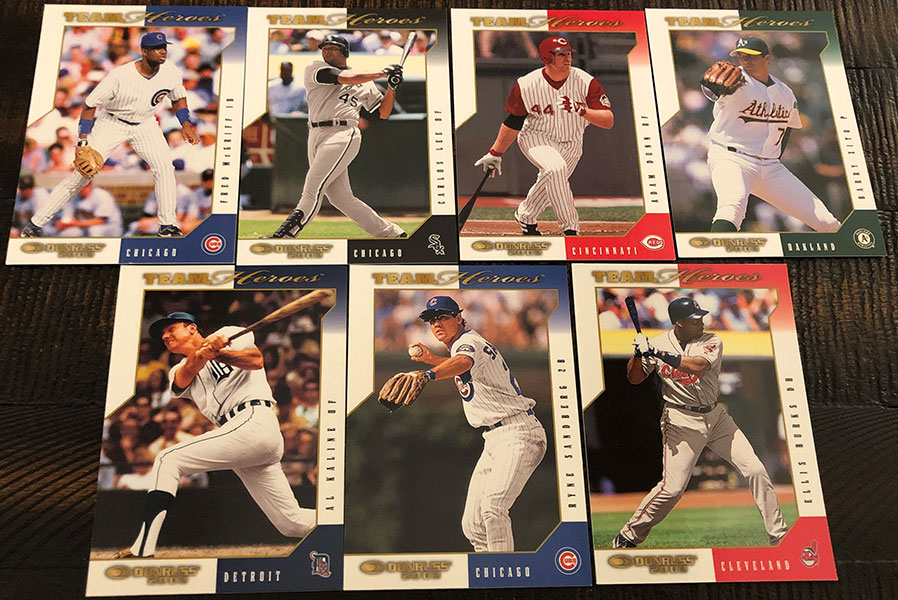 Pack 23 fun fact: Andruw Jones finished his career with 434 home runs and 10 Gold Glove Awards. How in the world is he not already in the Hall of Fame? 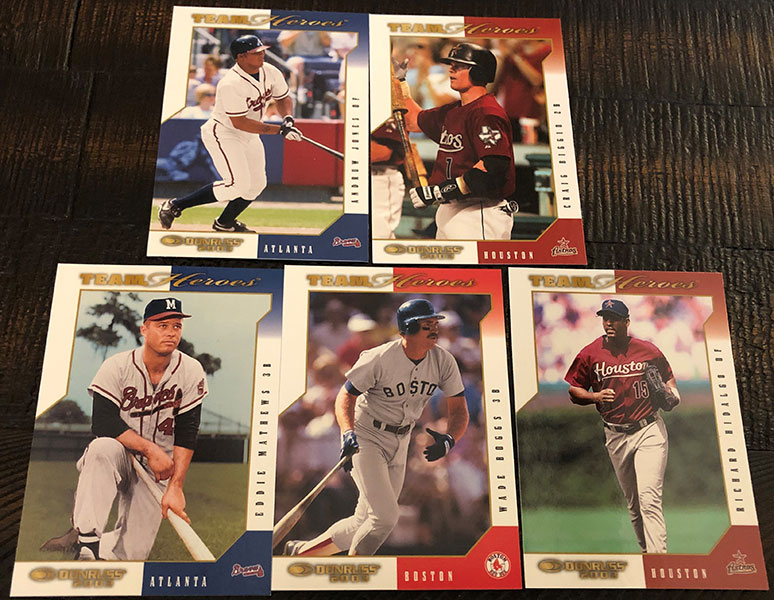 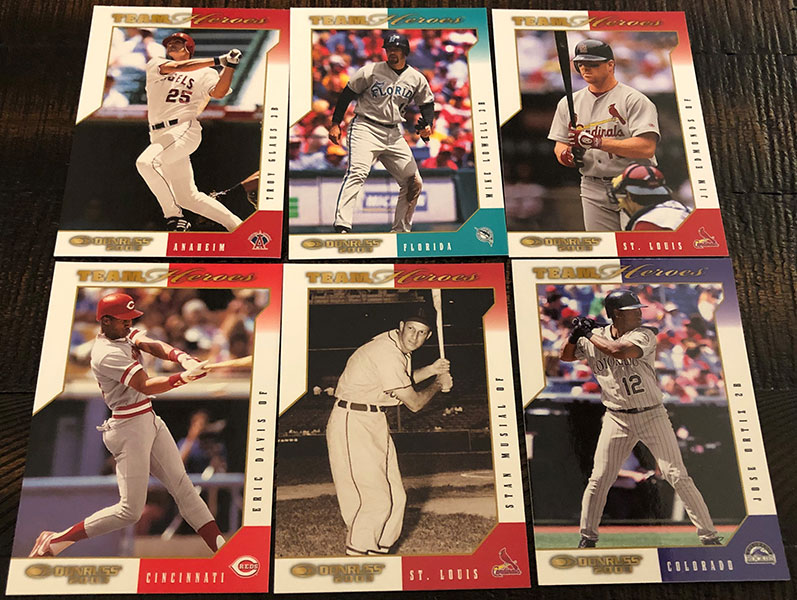 Lastly, the Stan The Man card back. I typically prefer to see his yearly stat lines but I can certainly appreciate the career highlights included here. 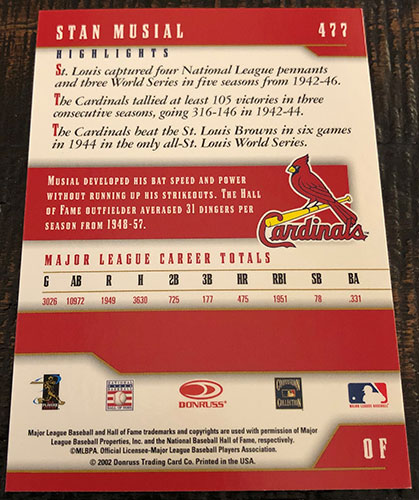 As I have stated before, I love the inclusion of the game’s legends into modern products. In turn, I really like this product. Pulling an autograph, some numbered parallels, Honus Wagner and Roberto Clemente in the same box? Count me in! Rickey on the Sox? Love it! I also appreciate them including multiple cards of the legends and some of the photos. An early shot of Griffey in a 2003 product just adds to the fun. I bought this box back in November, but if you can find it for this price today, I say grab one. I may even try to find another.