Sometimes new products take off from the start. Other times, as was the case with 2002 Topps Ten Baseball, they fall flat and disappear as quickly as they arrived. It looks as though the retail product did not meet expectations as it turned out to be a one-year wonder. 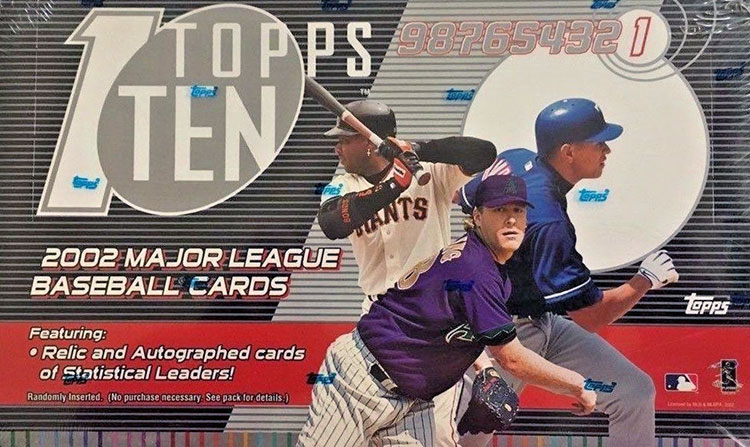 The premise behind the product was to highlight the top ten players in different statistical categories. The base set features 200 cards, 190 veteran cards featuring the top ten players in 19 different categories, and ten “Topps Ten Prospects.” Many of the game’s best all-around players appeared multiple times throughout the base set. For instance, Barry Bonds has seven different base cards. The product also has die-cut parallels, game-used relics and an autograph checklist featuring, you guessed it, ten players. 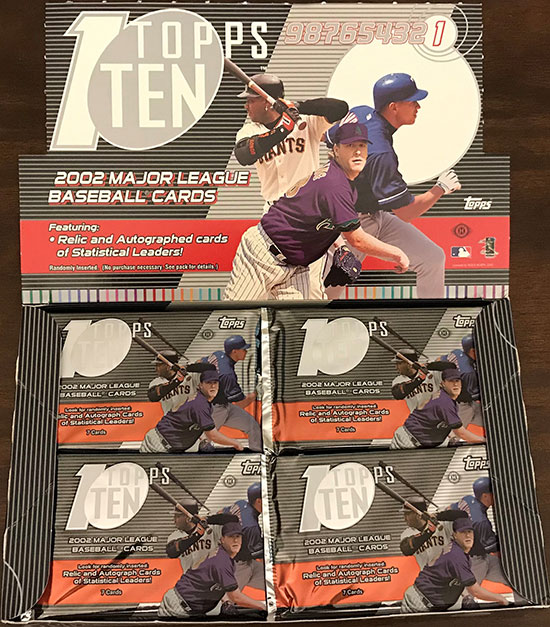 Pack 1 fun fact: Kerry Wood is one of just nine pitchers with 1,000 career innings pitched and a strikeout rate of 10.0 K/9 or higher. 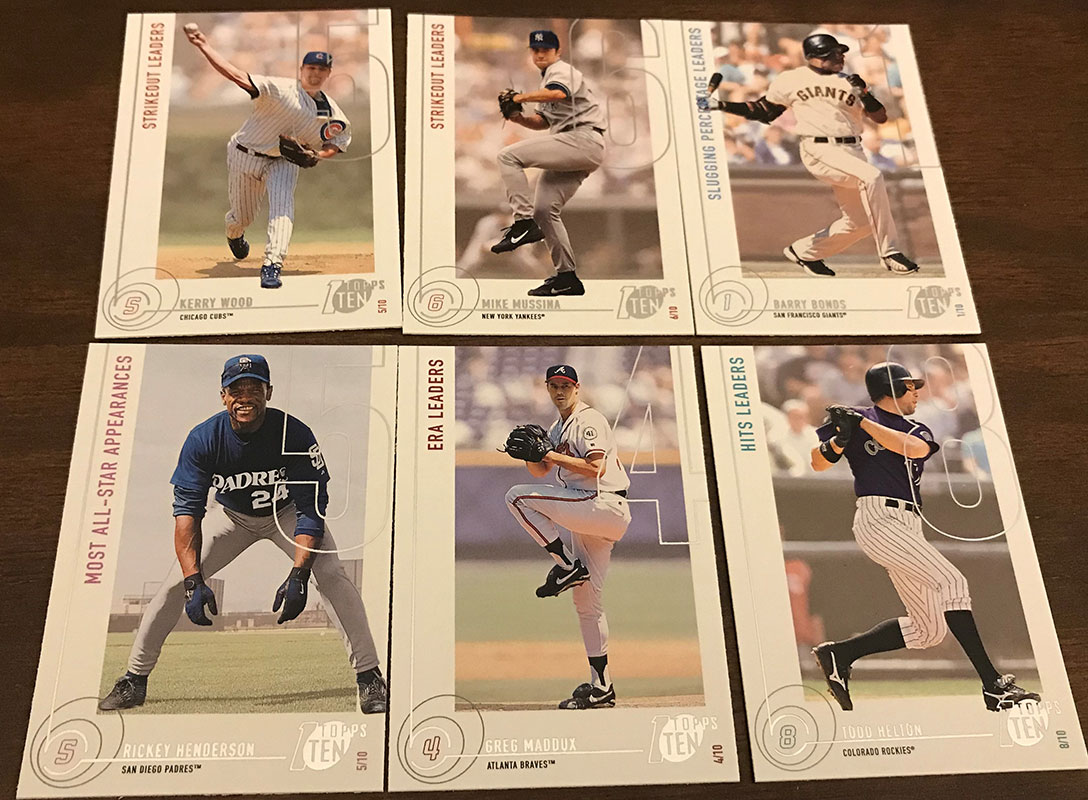 Pack 2 fun fact: Vladimir Guerrero stole a career-high 40 bases in 2002 when he put together his second straight 30-30 season. 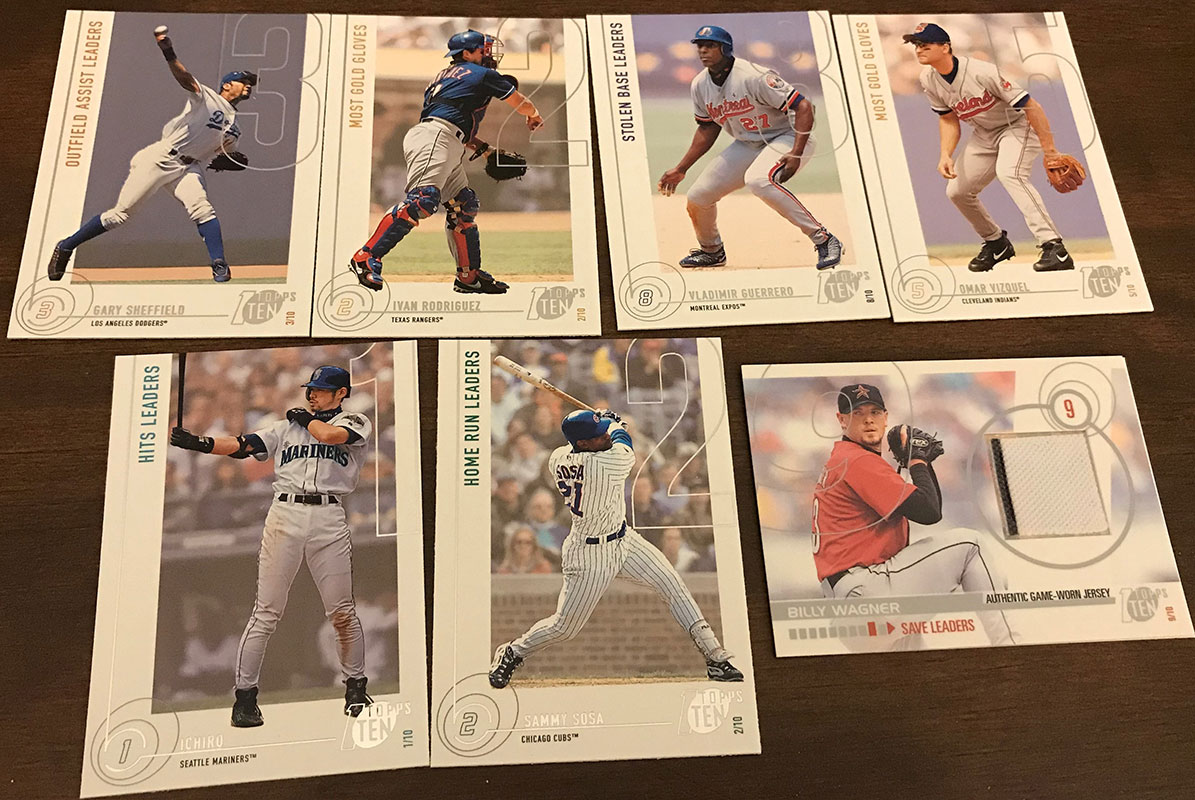 Pack 3 fun fact: There’s a good chance Randy Johnson will be baseball’s last 300-game winner. He became the 24th pitcher to reach that milestone on June 4, 2009. 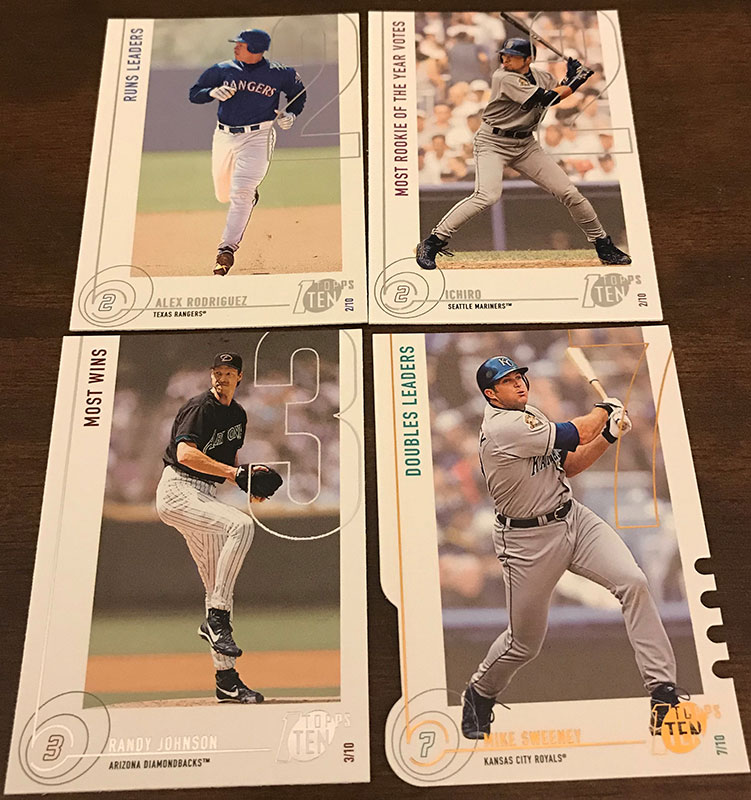 Pack 4 fun fact: Kaz Sasaki had 129 saves in four MLB seasons and 252 saves in 12 seasons in the Japanese League. Those 381 total saves would be good for eighth on the all-time list if they had all occurred stateside. 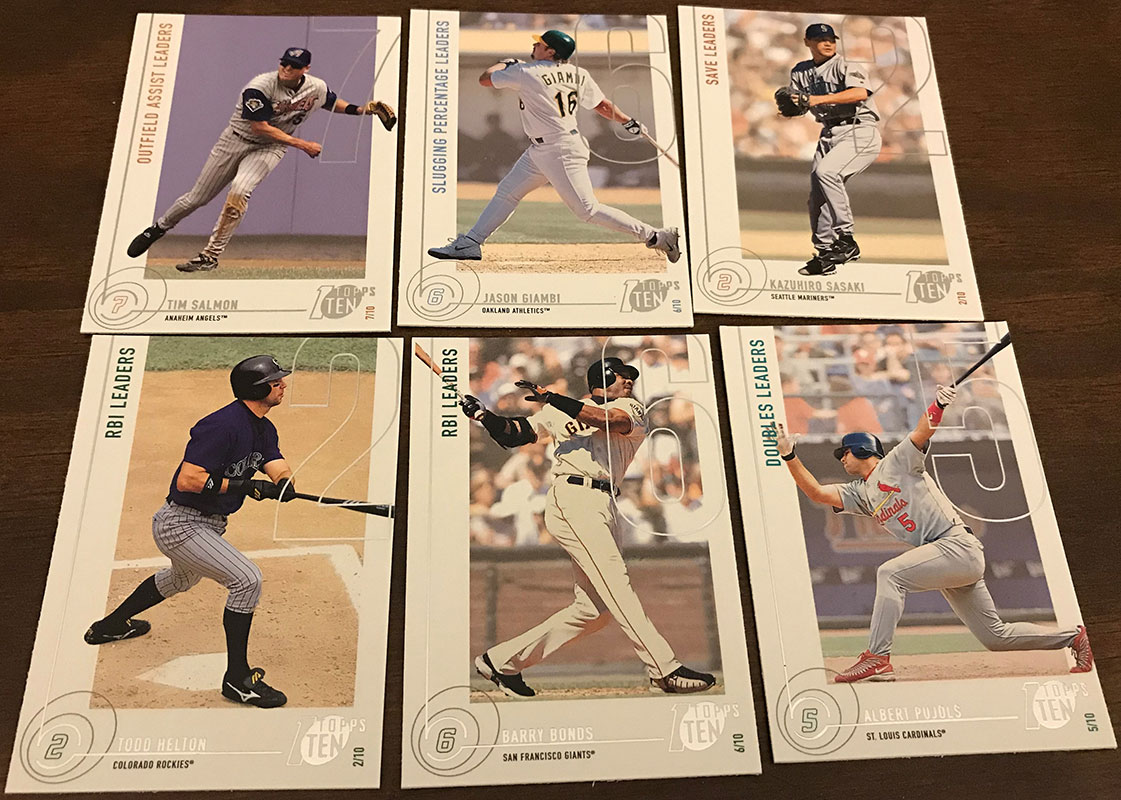 Pack 6 fun fact: Carlos Beltran finished his career with an impressive 143 outfield assists. He was truly the definition of a five-tool player.

Pack 7 fun fact: From the time he won his first Gold Glove Award in 1990, Greg Maddux claimed the award 18 times in a 19-year span. The lone exception was when Mike Hampton took home the hardware in 2003. 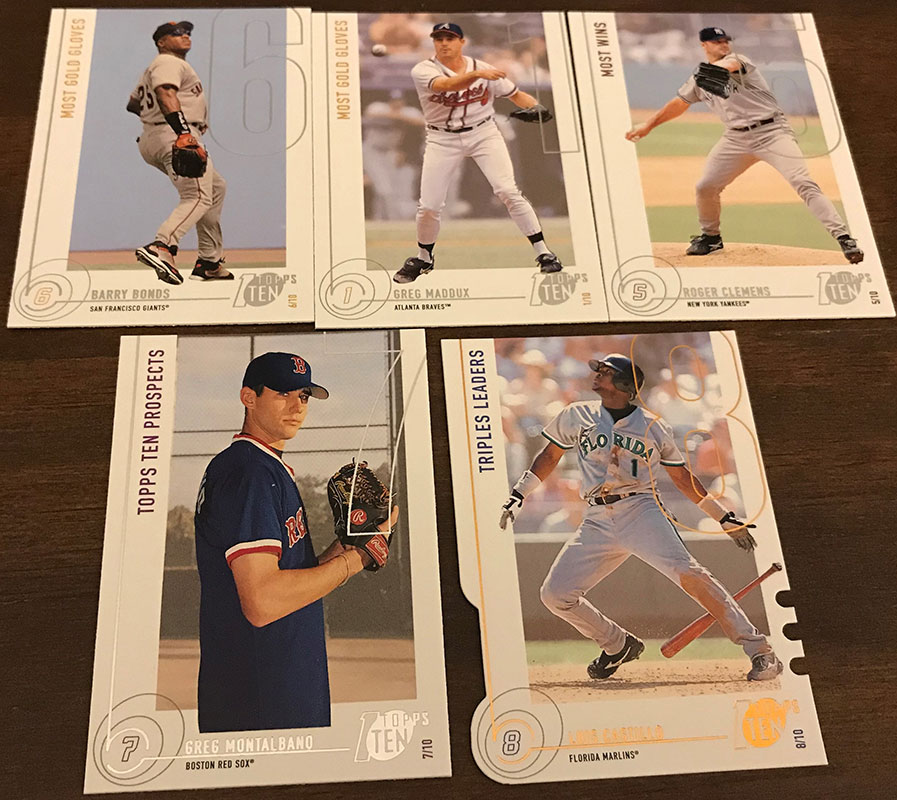 Pack 8 fun fact: Sammy Sosa did not start the All-Star Game during his legendary 66-homer season in 1998. The NL’s starting outfield was Barry Bonds, Larry Walker and Tony Gwynn. 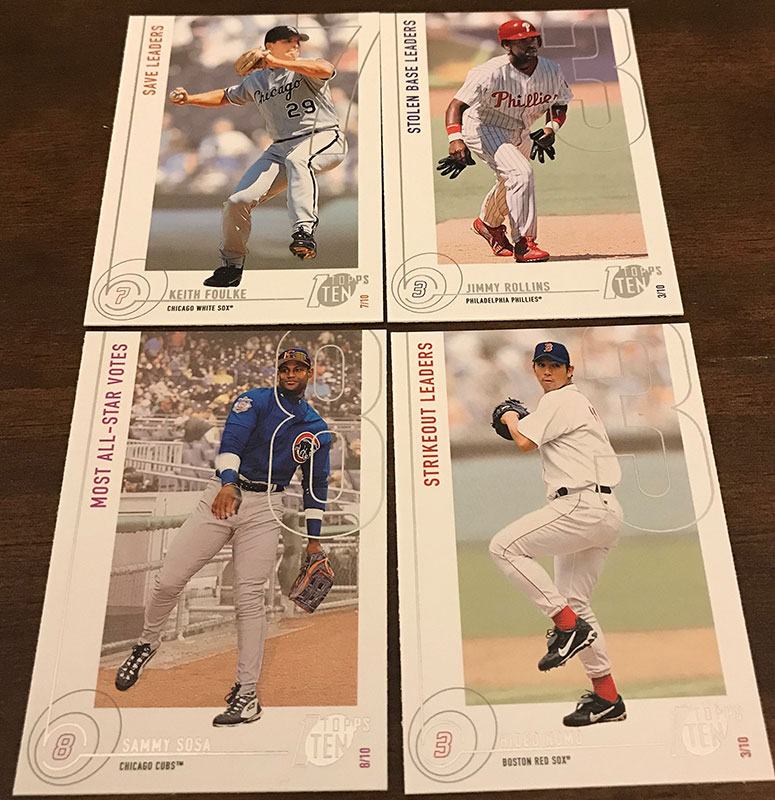 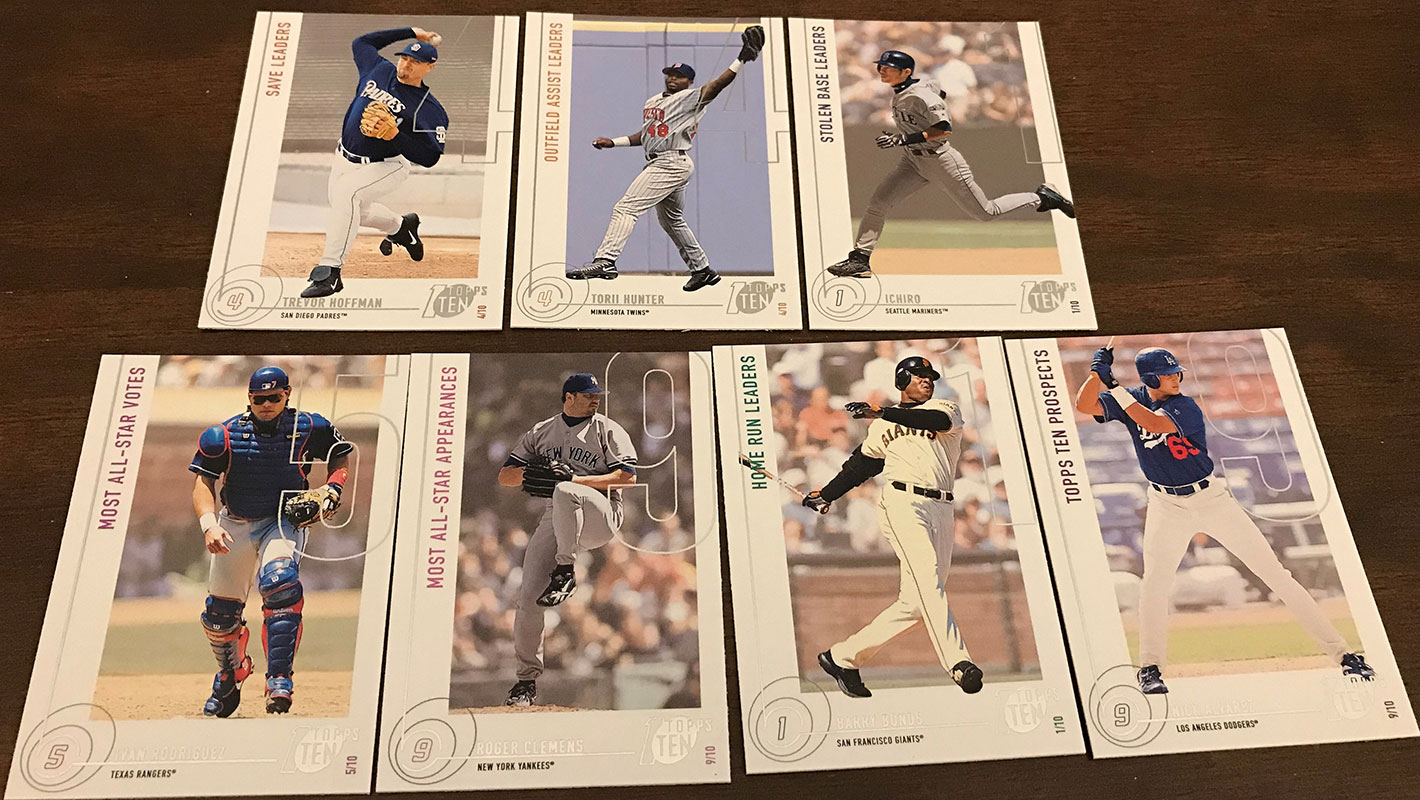 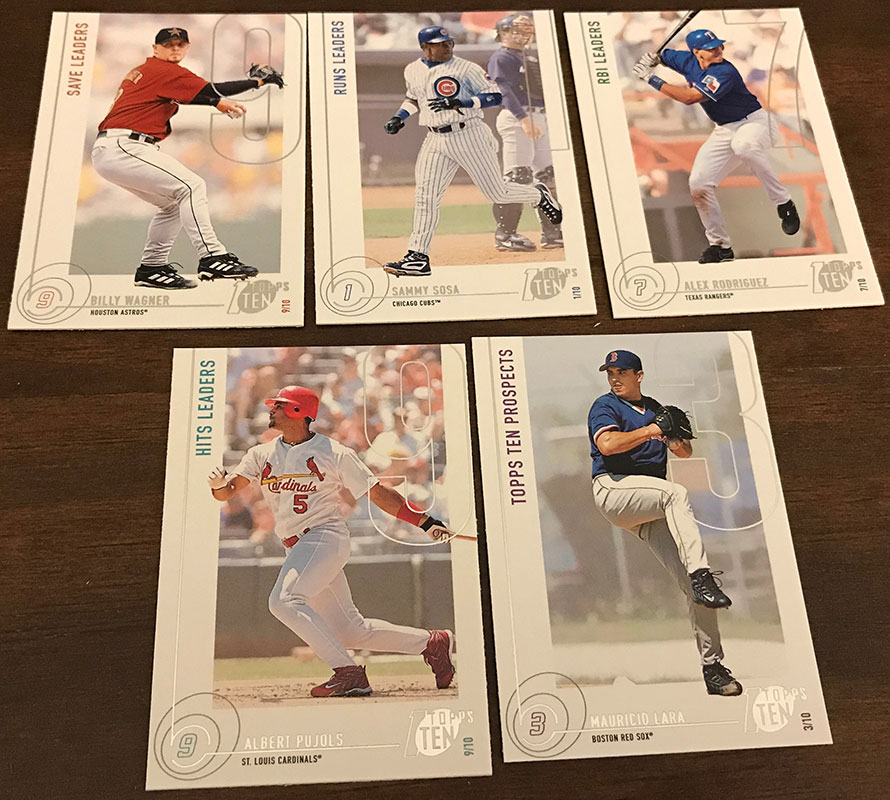 Pack 11 fun fact: Troy Percival was originally drafted as a catcher. He hit .203 with zero extra-base hits in 101 plate appearances in his pro debut before moving to the mound. He ranks 11th on the all-time list with 358 saves. 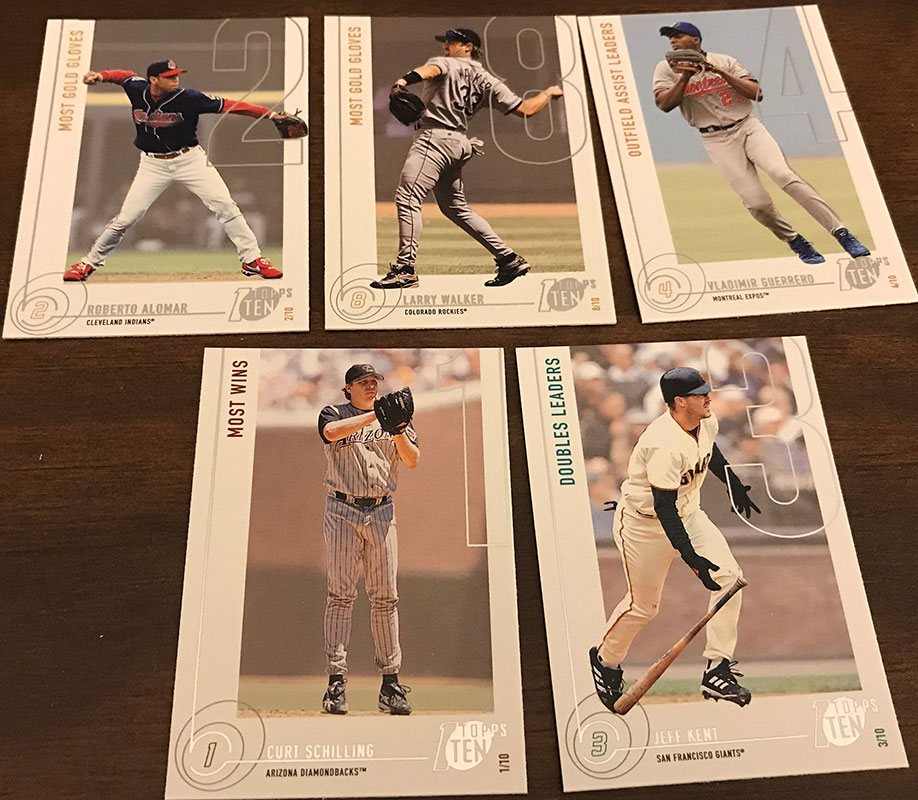 Pack 13 fun fact: Mike Mussina ranked 23rd on the all-time list among pitchers with 82.8 WAR. It’s a shock it took him six tries to earn induction into the Baseball Hall of Fame.

Pack 14 fun fact: Jeromy Burnitz was one of the most feared sluggers in baseball at his peak in Milwaukee. He averaged 34 home runs and 107 RBI during the four-year span from 1998 through 2001. 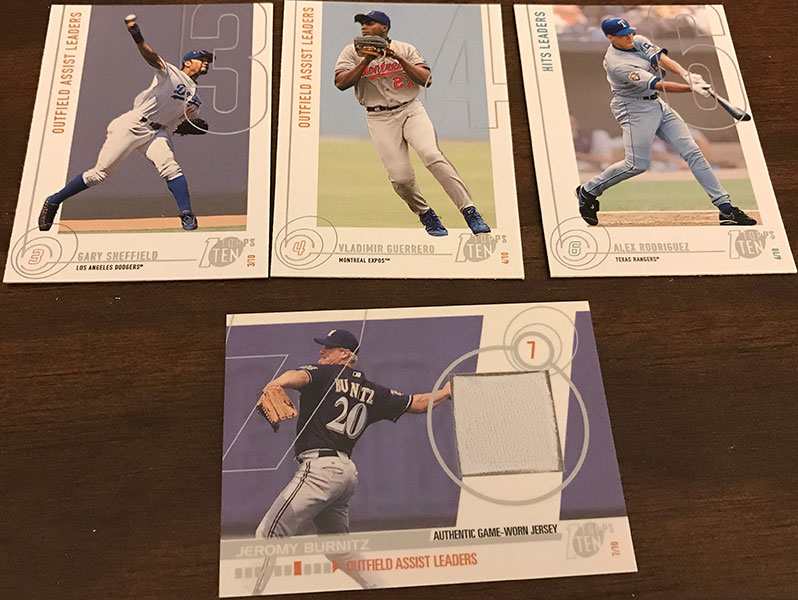 Pack 15 fun fact: Bobby Abreu finished his career with a .395 on-base percentage. That’s good for 76th on the all-time list, and speaks volumes to what an underrated player he was throughout his career. 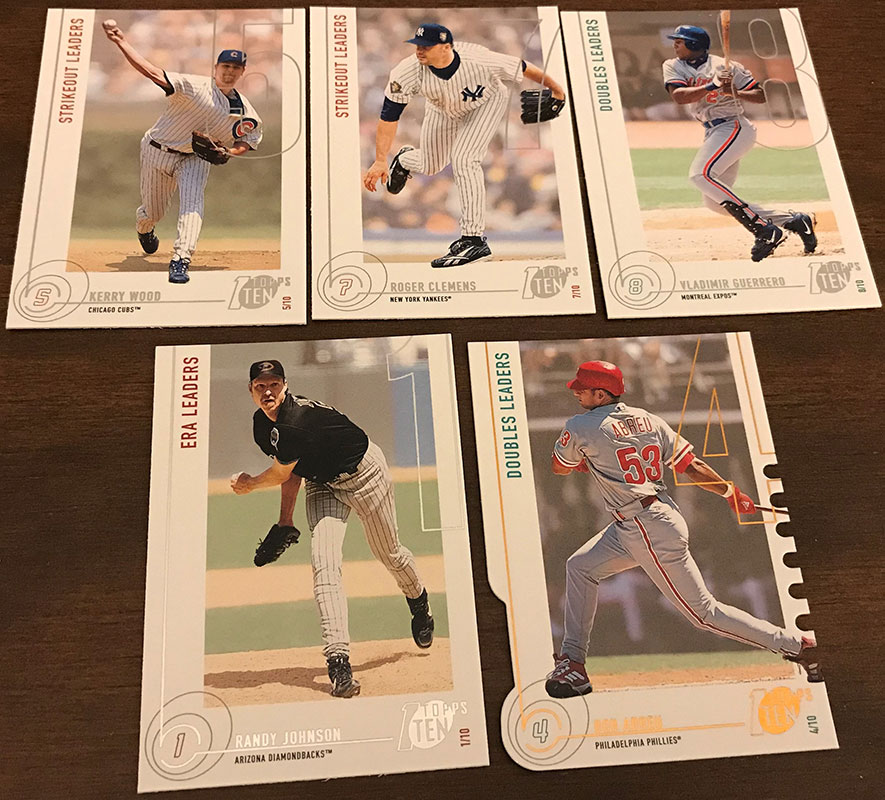 Pack 16 fun fact: It’s an arbitrary number in the grand scheme of things, but it’s fair to wonder what Omar Vizquel’s Hall of Fame case would look like if he had managed 123 more hits to get to 3,000 for his career. 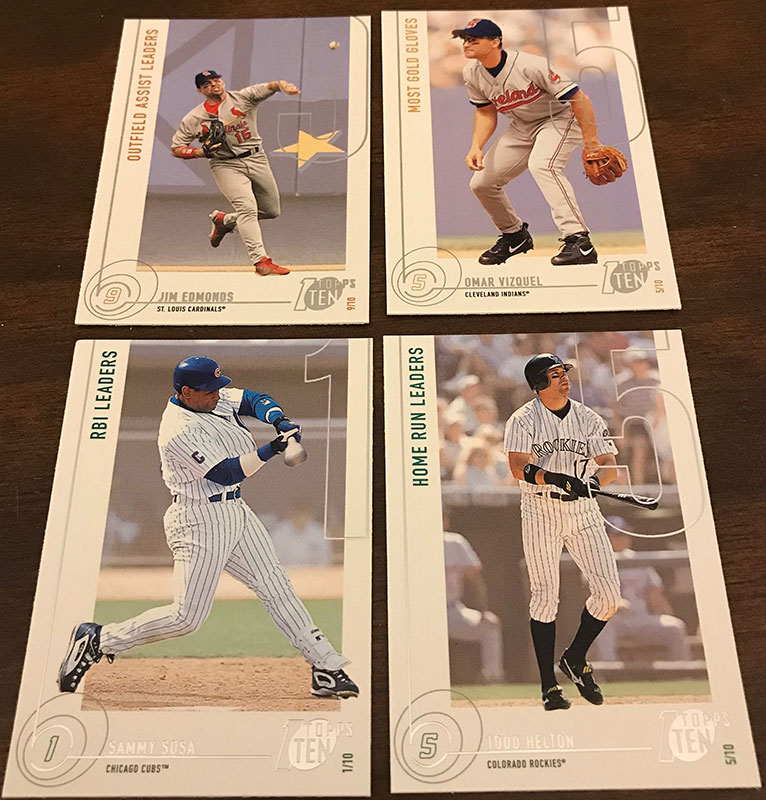 Alex Rodriguez, Pat Burrell, Barry Bonds & Clint Nageotte RC. It was right about now that I started to wonder if any of these Topps Ten Prospects turned out to be any good. 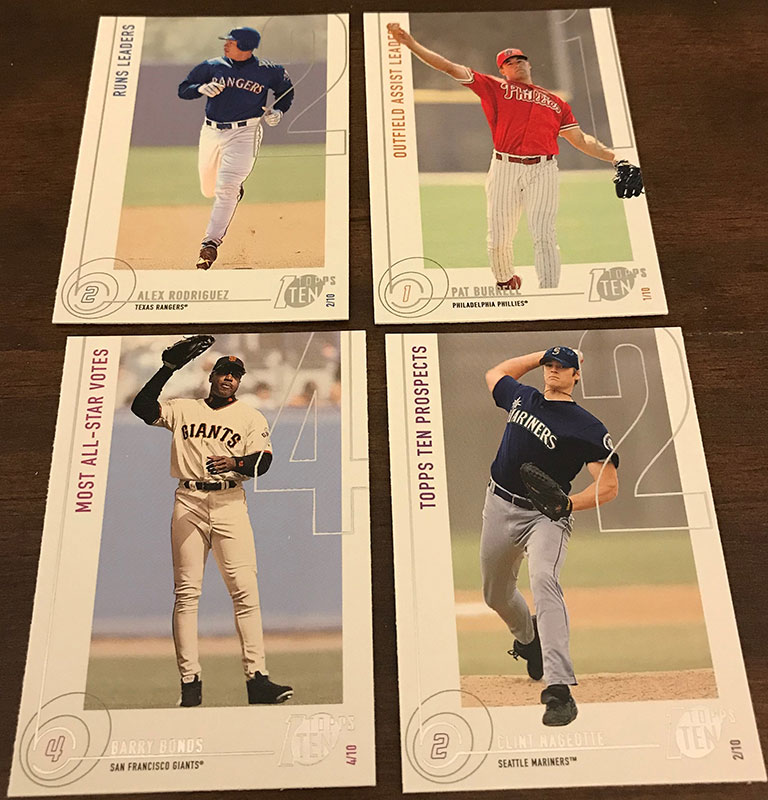 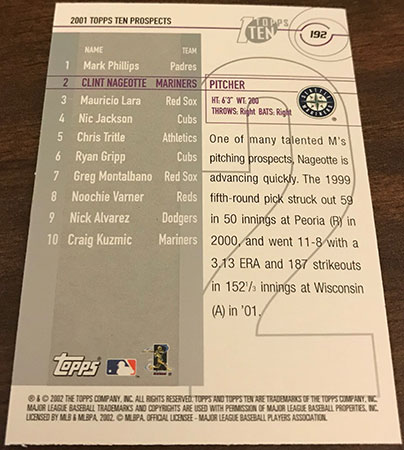 Pack 18 fun fact: Lance Berkman is tied for 48th on the all-time list with a 144 OPS+ and he received just 1.2 percent of the vote in his first and only year on the Hall of Fame ballot.

Pack 19 fun fact: It’s easy to forget that Albert Pujols and Mark McGwire were teammates for a year in 2001. McGwire hit .187 that year, but still managed a 105 OPS+ thanks to his 29 home runs in just 364 plate appearances. 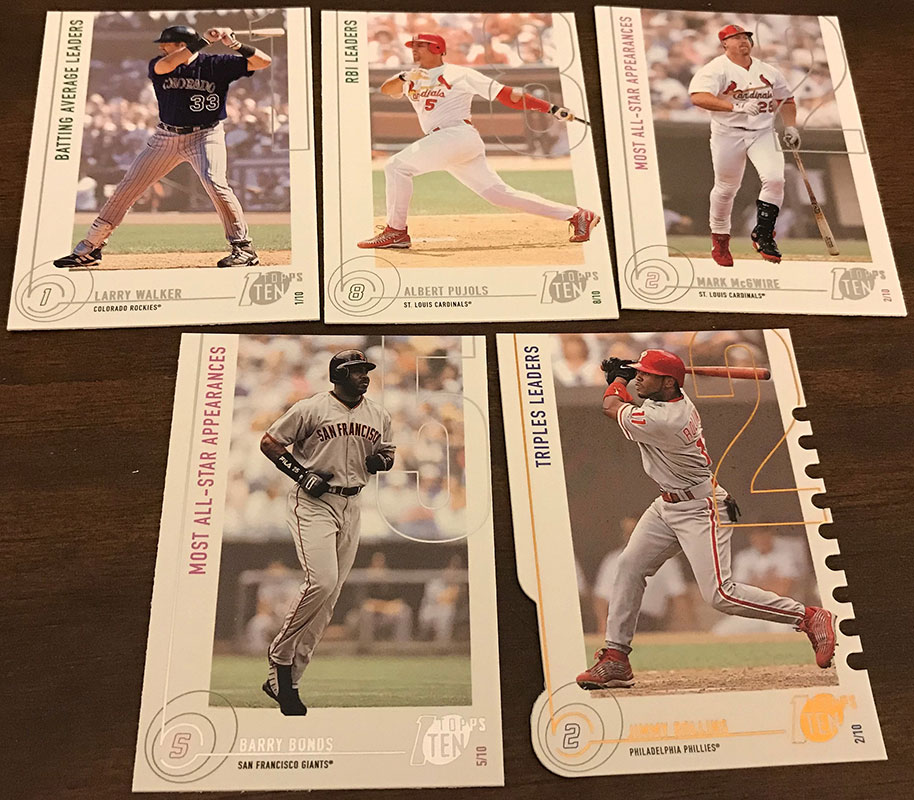 Pack 20 fun fact: There are just 31 players in MLB history who have won the MVP award more than once. Barry Bonds leads that list with seven wins. Juan Gonzalez is also a member as AL MVP winner in 1996 and 1998. 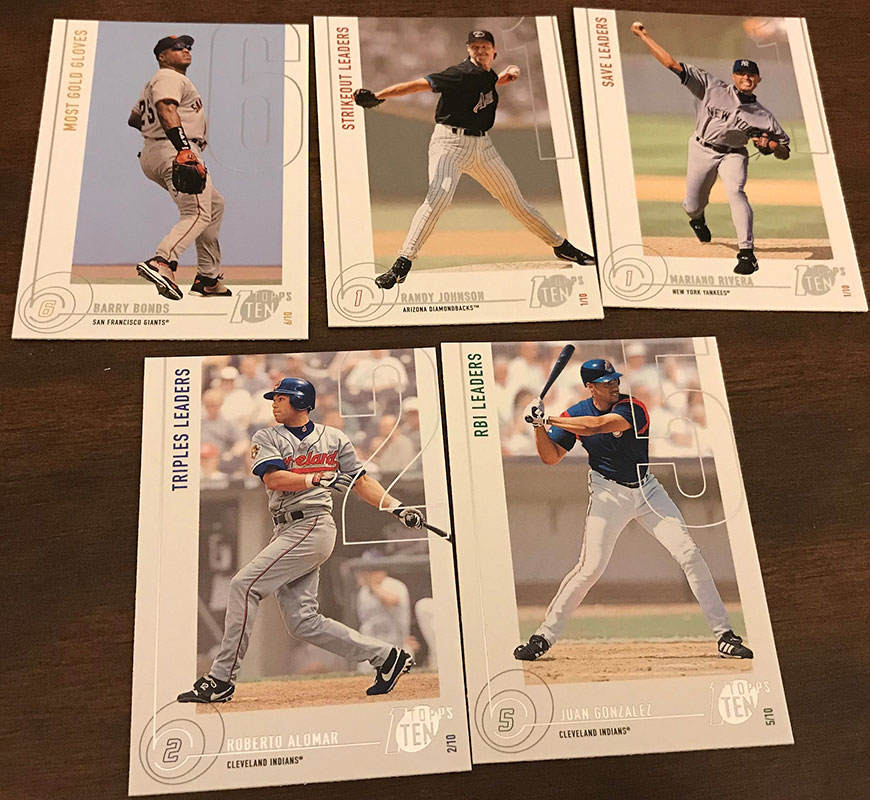 Pack 21 fun fact: Mike Piazza gets a bad rap for his defense, but he did throw out 23 percent of base stealers in his career. The league average is around 31 percent. 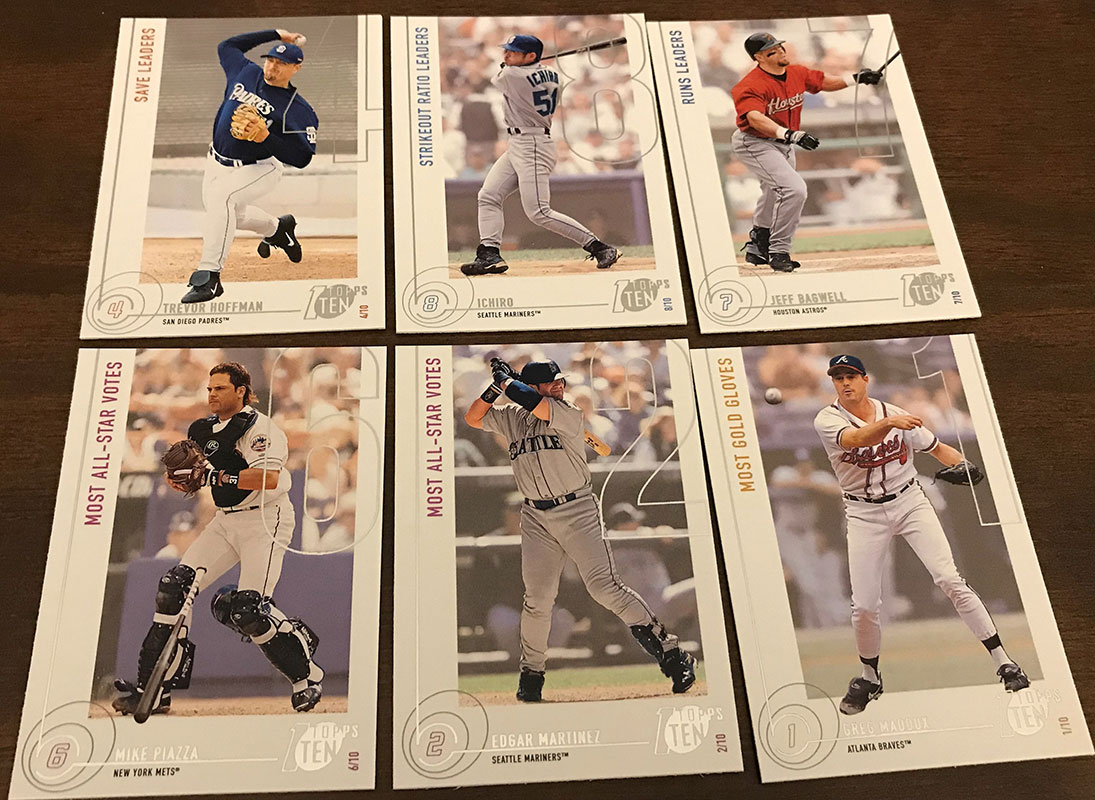 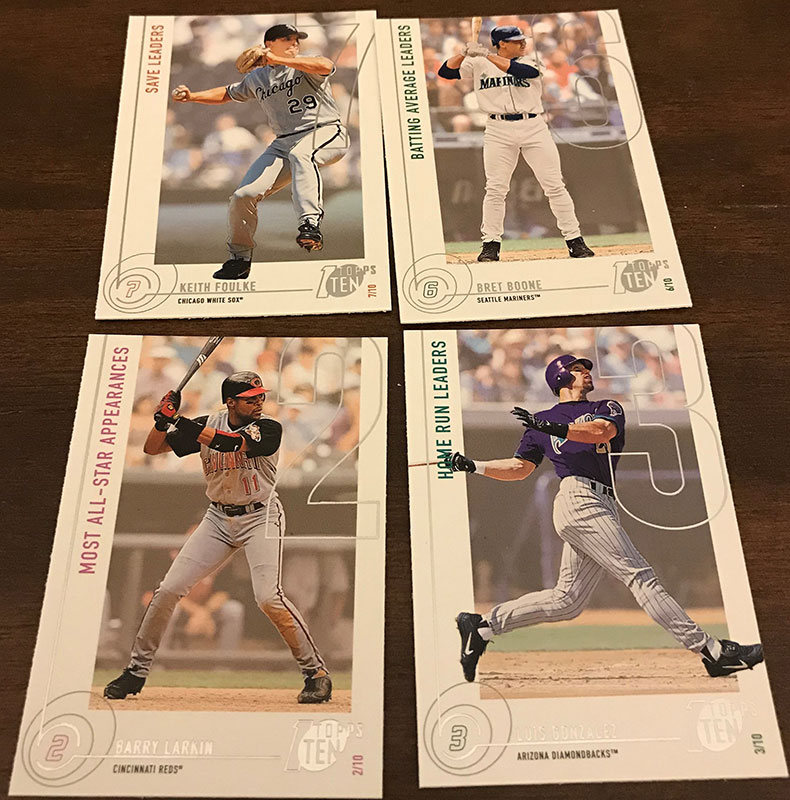 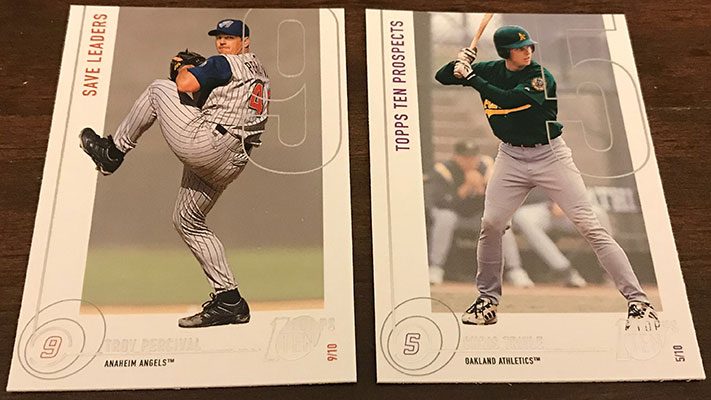 Lastly, the card back. Based on what the set represents, I do actually like these card backs. They feature the full top ten list the player is a part of, and also some player information based around that specific category. 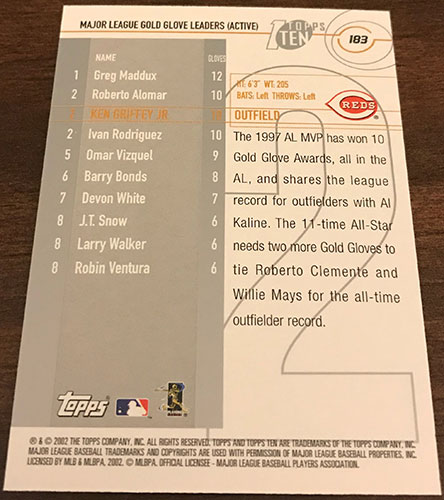 Obviously this set was not a hit, since it was never released again. But, was it really that bad? I do think they went a little overboard with the design. The card fronts feature the player’s rank on that list not once, not twice, but three different times. The large number in the upper-right corner, which in most cases overlaps the player photos (not a great look), the ranking in the lower-left corner of the card (probably enough to get the point across) and also the microscopic numbers in the lower-right corner on the card fronts.

In my opinion the lower left corner rankings alone would have been enough, and would have helped the overall appearance.

Another negative is the list of ten rookies used in this set. I can’t quite explain this one. It certainly was not the top ten prospects heading into the 2002 season. The only guess I can come up with is that Topps was hoping to catch a hot prospect.

There are some positives to the set, though. With a set based mainly on top ten league leaders, there should be plenty of star power in the base set. And there is. Bonds having seven cards may be a bit aggressive, but would you rather see one Bonds base card and six cards of utility players? Not me. The die-cuts are also pretty sharp cards.

Lastly, the ten-card autograph checklist has some good names. Found once in every 67 packs, the checklist includes Bonds, Barry Zito, Jim Edmonds, Jimmy Rollins, Roger Clemens and Roy Oswalt. I wouldn’t be disappointed hitting an autograph of any of those guys.