Always a collector favorite because of the photography, Stadium Club was a staple Topps release from its debut in 1991 until 2003. After disappearing for four years, Topps released another Stadium Club set in 2008, before again shelving the product for another five years. Luckily, Stadium Club made another return in 2014, and has been in Topps’ product mix ever since. The 2020 version of Topps Stadium Club released last week. 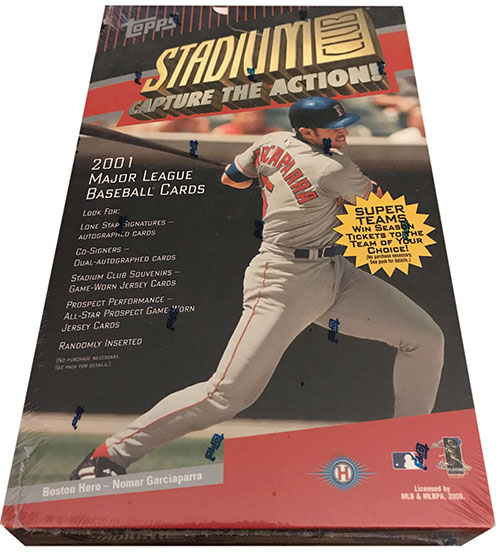 2001 Topps Stadium Club Baseball continues the legacy of great photography. The set is full of action shots, including players sliding, diving and leaping, which are some of my favorite shots. The base set consists of 200 cards. You can expect to pull cards from two different insert sets in every box, Capture the Action and Diamond Pearls. The other insert sets, relics, and autograph cards are pulled at much longer odds. The product was an early release for Topps, released in December, 2000. Because of this, the two big rookies of 2001, Ichiro Suzuki and Albert Pujols are not on the checklist. There are no notable Rookie Cards in the set.

Cards per pack: 7
Packs per box: 24
Price paid: $33 (prices have come up since I purchased this box nearly three years ago)

Pack 1 fun fact: Mike Trout hit his 300th career home run on Saturday, overtaking Tim Salmon for the No. 1 spot on the Angels franchise leaderboard in the process.

Pack 2 fun fact: The Braves sent Adam Wainwright to the Cardinals prior to the 2004 season in a five-player deal that brought J.D. Drew to Atlanta. 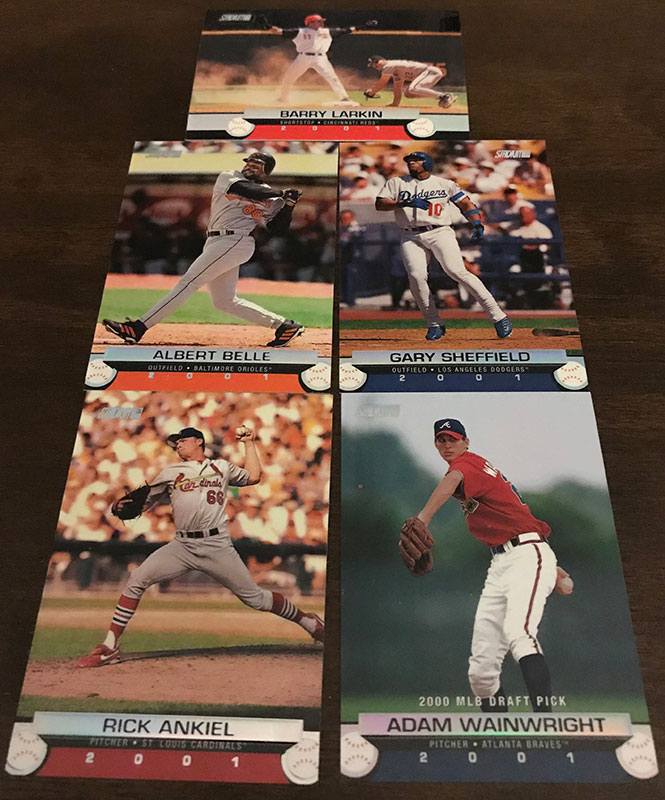 Pack 3 fun fact: A third-round pick in the 2000 draft, Grady Sizemore was traded to Cleveland two years later with Cliff Lee and Brandon Phillips in exchange for Bartolo Colon.

Pack 4 fun fact: Edgar Renteria was 19 years old when he made his MLB debut for the Marlins in 1996. He ended up finishing second in NL Rookie of the Year voting. 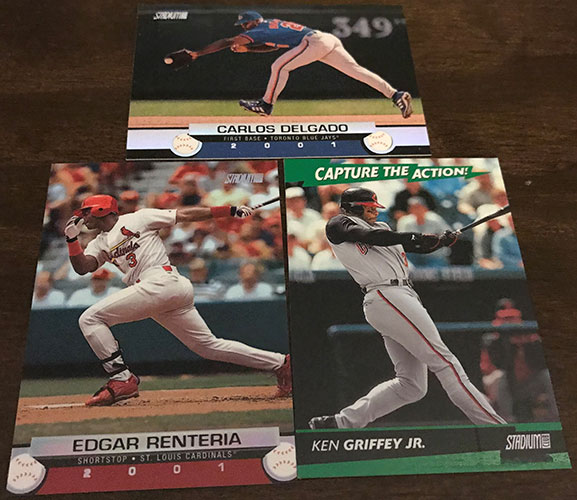 Pack 5 fun fact: Orlando Cabrera won his first of two career Gold Glove Awards in 2001, while also setting career-highs in home runs (14) and RBI (96). One of the most underrated players of the 2000s. 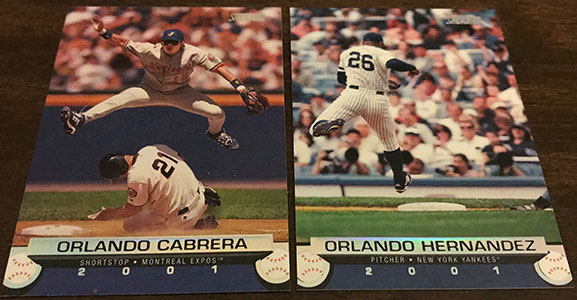 Pack 6 fun fact: Rocco Baldelli was the No. 6 overall pick in the 2000 draft. He’s one of just two players from that year’s top 10 to record a positive career WAR total, along with No. 1 overall pick Adrian Gonzalez. 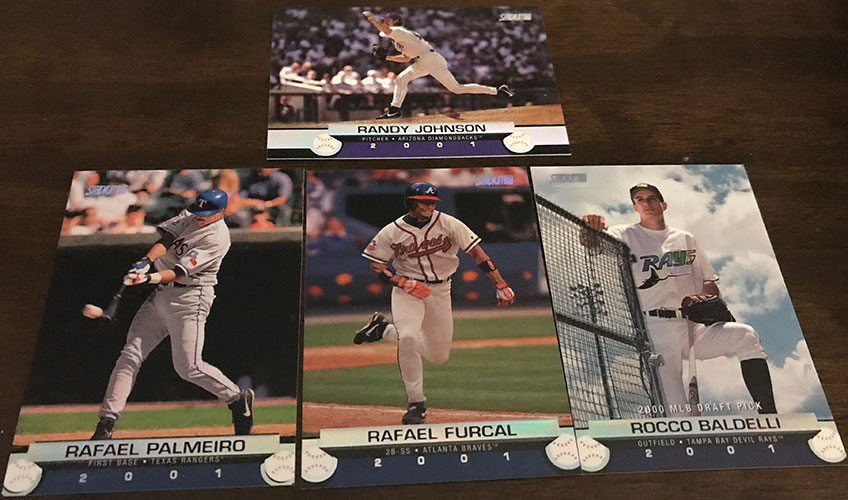 Pack 7 fun fact: The 2001 season was Alfonso Soriano’s first full year in the majors. He hit .268 with 34 doubles, 18 home runs and 43 steals to finish third in AL Rookie of the Year balloting. 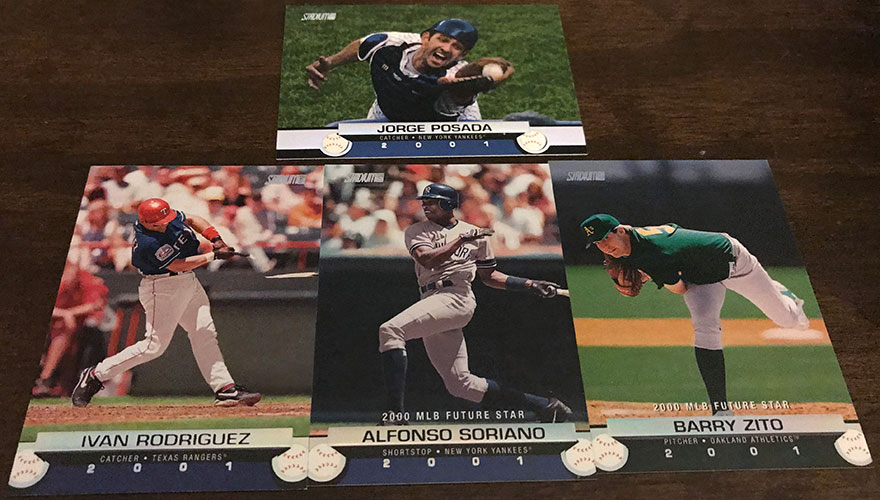 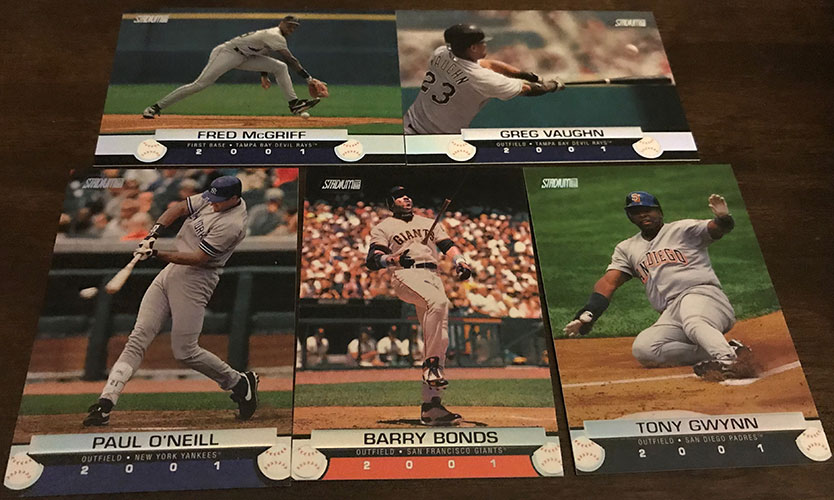 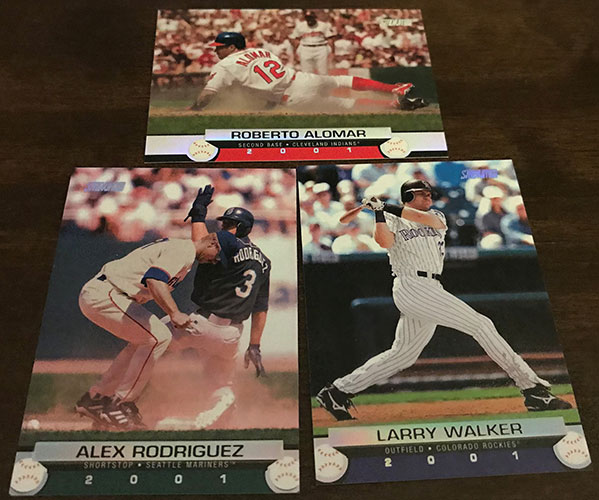 Pack 11 fun fact: Juan Gonzalez hit .289 with 22 home runs and 67 RBI in his only season with the Tigers in 2000. He was acquired prior to the year in a nine-player trade that sent six prospects to Texas. 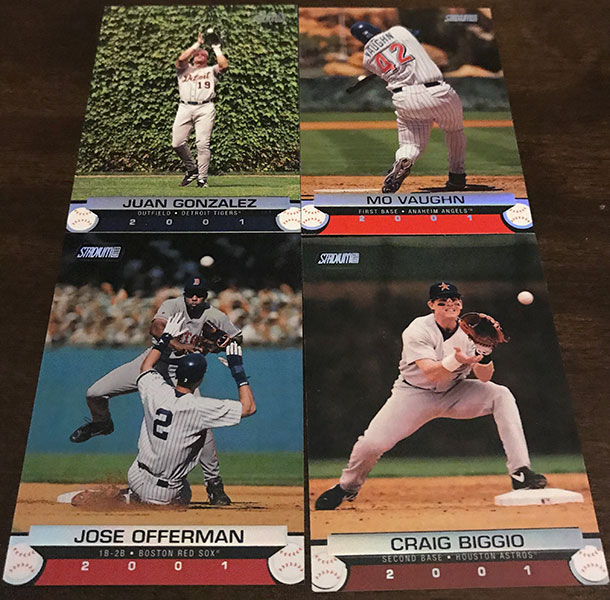 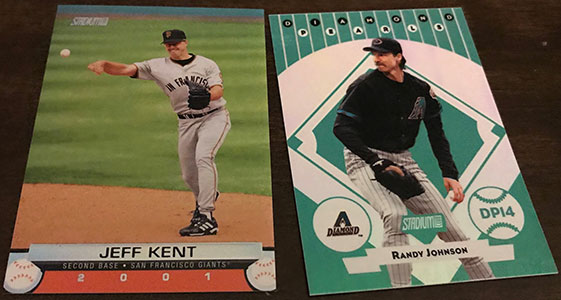 Pack 13 fun fact: Andruw Jones (No. 1) and Vladimir Guerrero (No. 9) were both ranked among the top 100 prospects by Baseball America at the start of the 1996 season. Suffice to say they lived up to expectations. 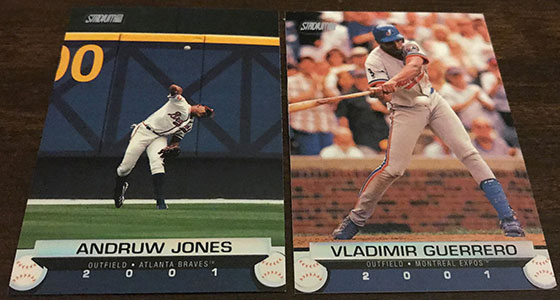 Pack 14 fun fact: It’s fitting that Mike Hampton is batting in his picture since he was one of the best hitting pitchers in recent memory. The five-time Silver Slugger winner hit a career-high seven home runs in 2001. 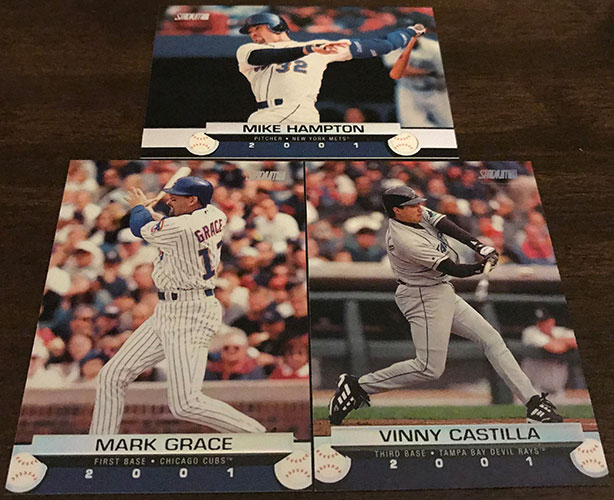 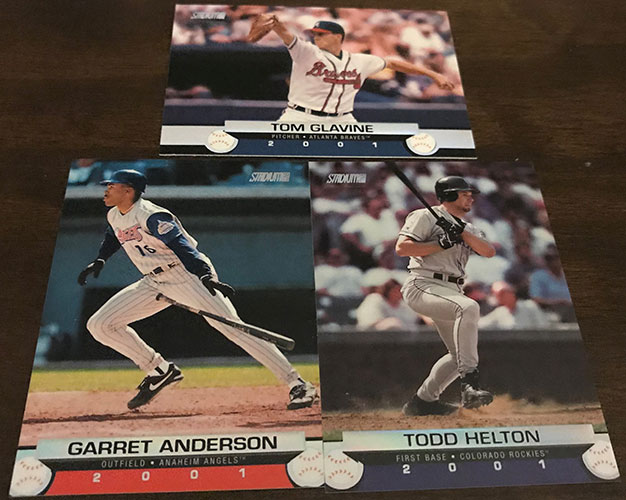 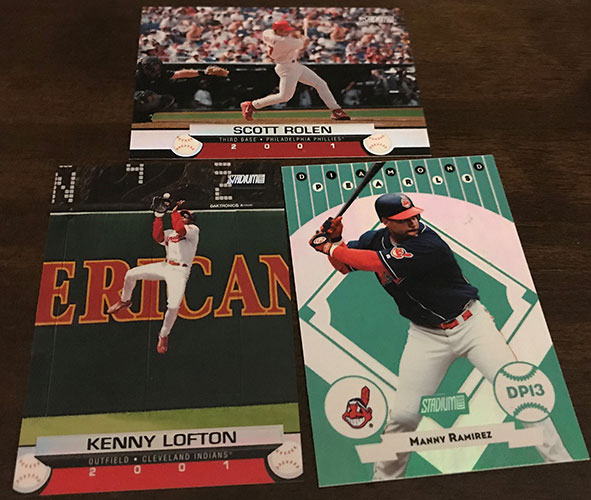 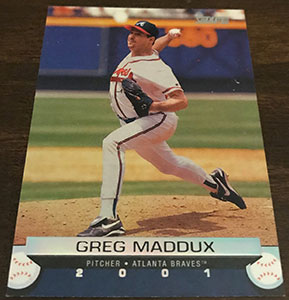 Pack 19 fun fact: Another player who hung up his spikes after the 2001 campaign, Ken Caminiti hit .228 with 15 home runs and 41 RBI while splitting the season between Texas and Atlanta. 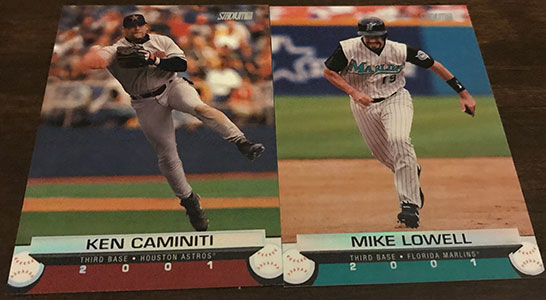 Pack 20 fun fact: At the age of 24, Troy Glaus posted his second straight 40-homer, 100-RBI season in 2001. He finished his career with 320 home runs and was one of the most dangerous sluggers in all of baseball at his peak. 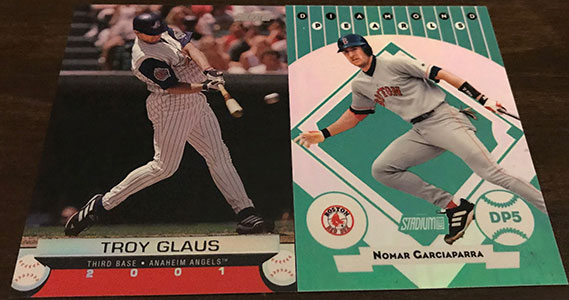 Pack 22 fun fact (via Shane): I play in a men’s wood bat baseball league. A teammate of mine was drafted by the Devil Rays in 2005. He said he was in minor league camp in the spring of 2006, and a teammate of his that he hadn’t met yet took batting practice and hit almost everything over the fence. That fellow Rays minor leaguer? Josh Hamilton. 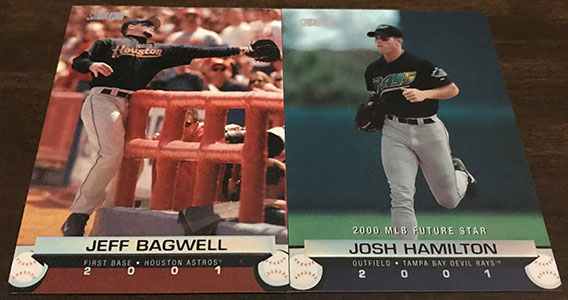 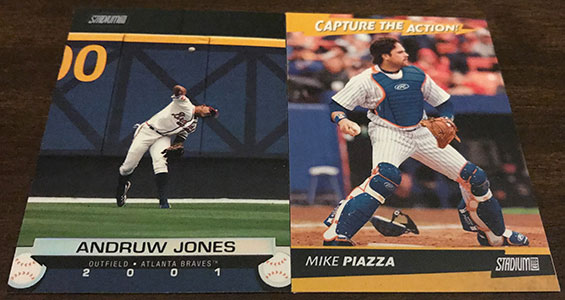 I have always loved Stadium Club. The photography stands out and there have typically been some really good looking inserts as well. I buy a box of Stadium Club every year, and it is not about the hits. The base cards are excellent. I just received my box of 2020 Stadium Club, and can’t wait to bust it.