Just 85 days until Christmas! What does that have to do with anything?? You’ll see.

2000 Pacific Baseball was an early release, hitting shelves in December, 1999. The base set consists of 500 cards — 450 players plus 50 photo variations. The variations are not short prints but simply include a posed photo instead of an action shot. Since the set was released in time for Christmas one of the insert sets was literally Christmas Ornaments. Yes, the shiny die cut cards even came straight out of the pack with a string attached, ready to be hung on the tree. 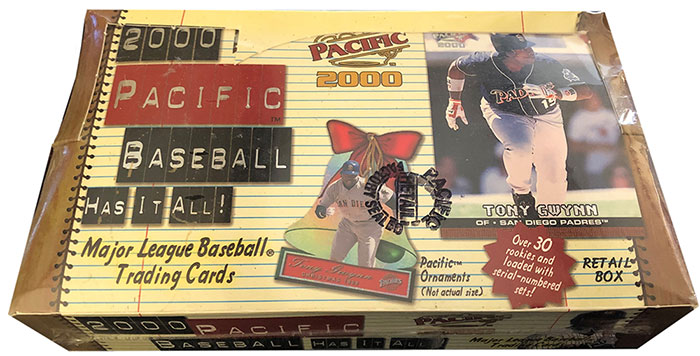 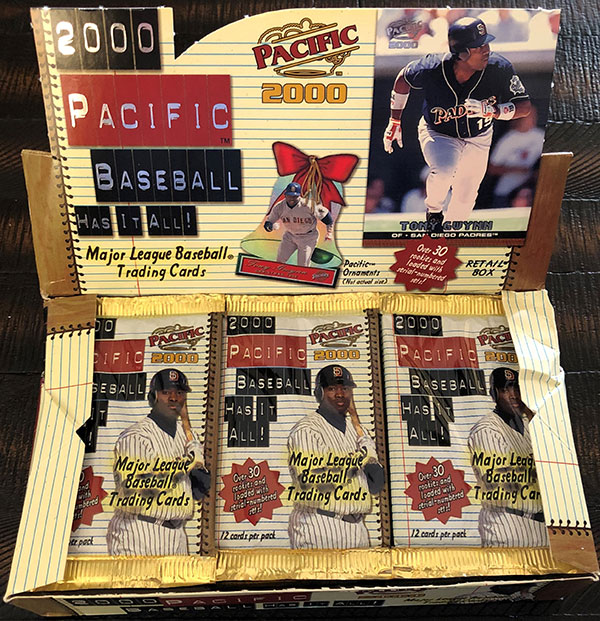 Pack 1 fun fact: Vernon Wells earned $131.4 million over the course of his 15-year career, enough to make him the 77th-highest earner in MLB history.

Pack 3 fun fact: Matt Williams set the D-backs single-season record with 142 RBI during the 1999 season. That record was matched by Luis Gonzalez in 2001. 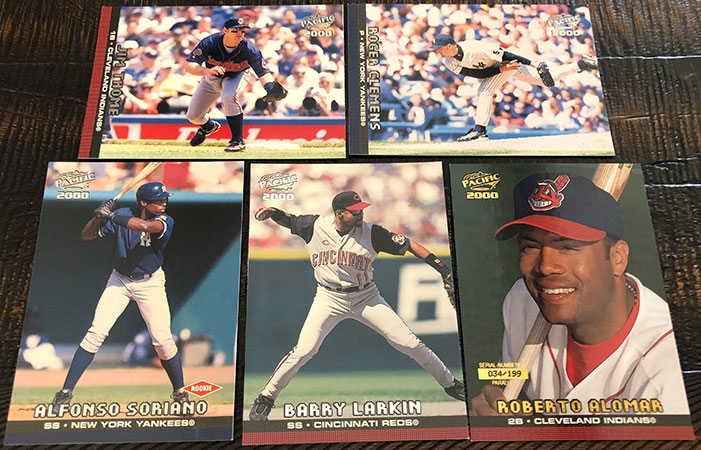 Pack 5 fun fact: Carlos Lee stole 125 bases in his 14-year MLB career, not something most fans would expect if they only saw the tailend of his career. 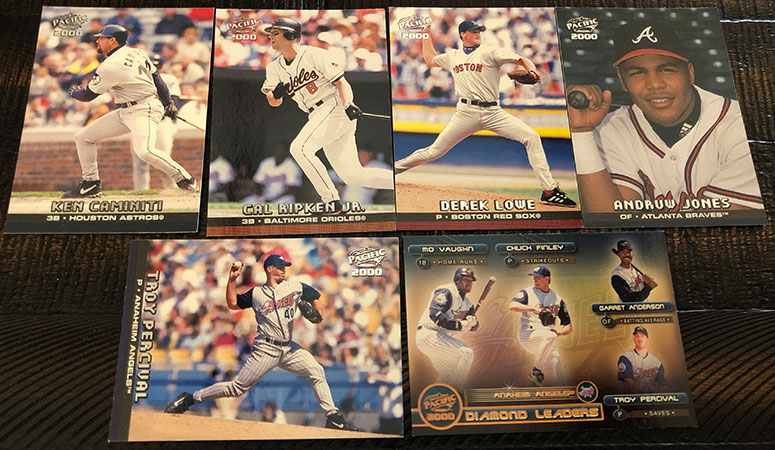 Carlos Beltran, Greg Maddux & Mo Vaughn Christmas Ornaments (1:12.5 packs). Have you ever seen anything like it??

Pack 8 fun fact: What in the world? I’m going to need a moment to collect my thoughts. 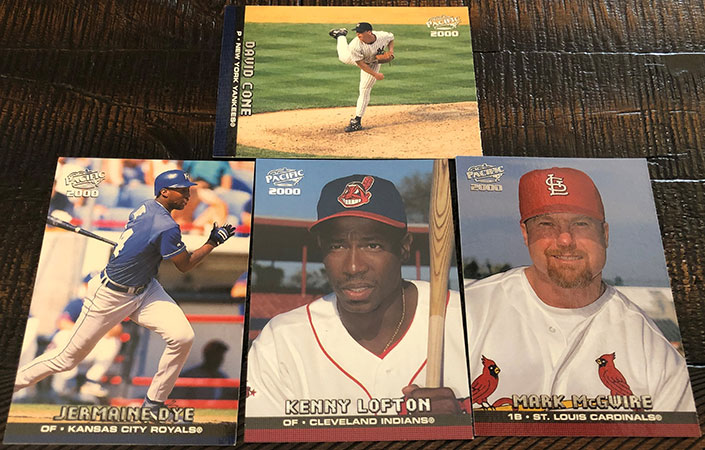 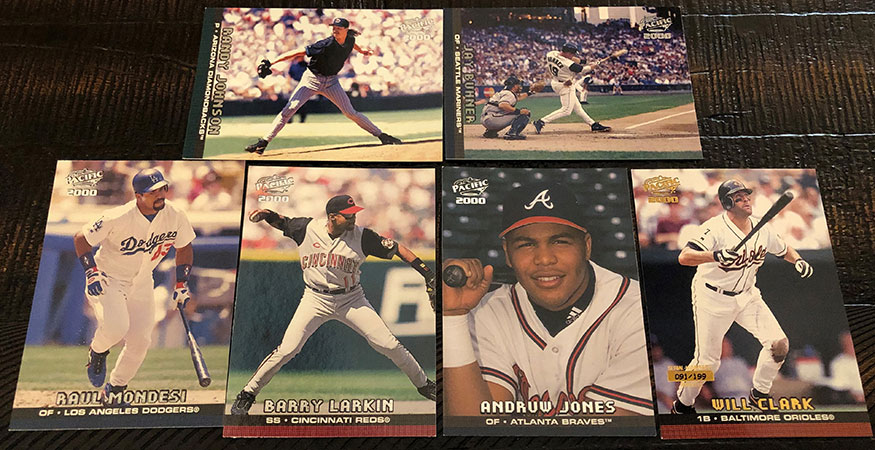 John Valentine, Mike Lowell, Miguel Tejada, Greg Maddux & Vladimir Guerrero. Two weeks in a row featuring braces. That has to be some kind of record.

Pack 12 fun fact: I can’t wait to see who has braces in next week’s break. Keep the streak alive, Shane! 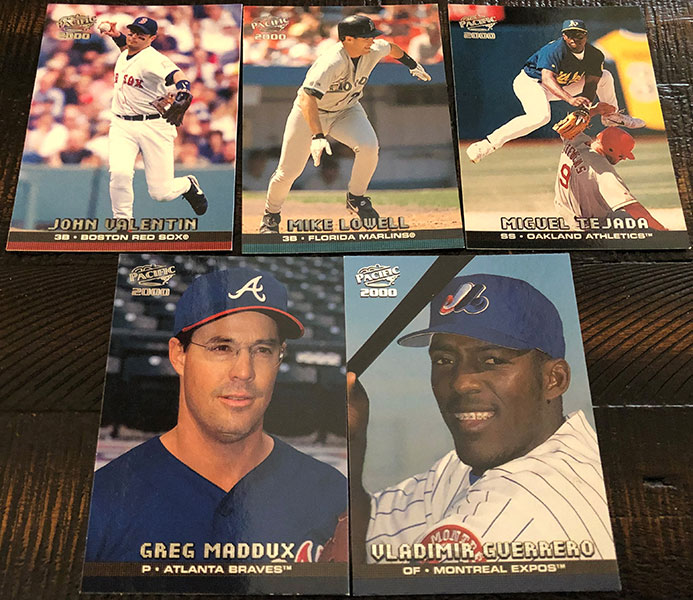 Pack 14 fun fact: The Expos traded Rondell White to the Cubs at the 2000 trade deadline in exchange for left-hander Scott Downs.

Pack 15 fun fact: The Padres traded Wally Joyner to the Braves prior to the 2000 season in a six-player blockbuster. The deal also sent Reggie Sanders and Quilvio Veras to Atlanta, and shipped Ryan Klesko, Bret Boone and Jason Shiell to San Diego. 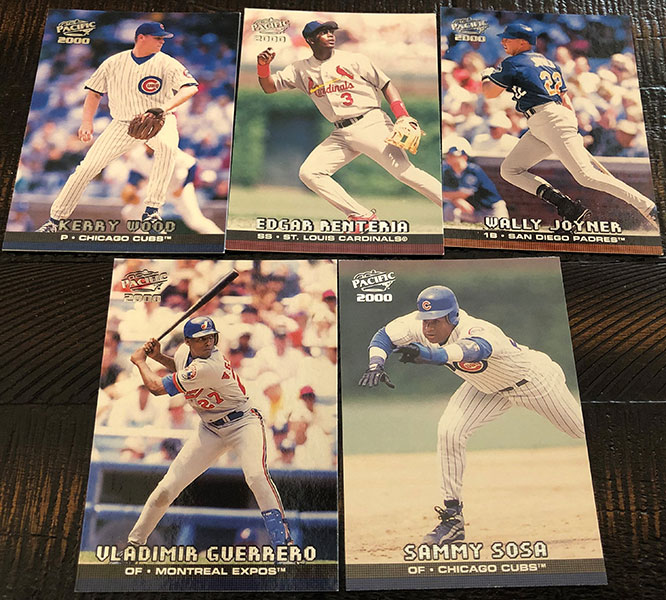 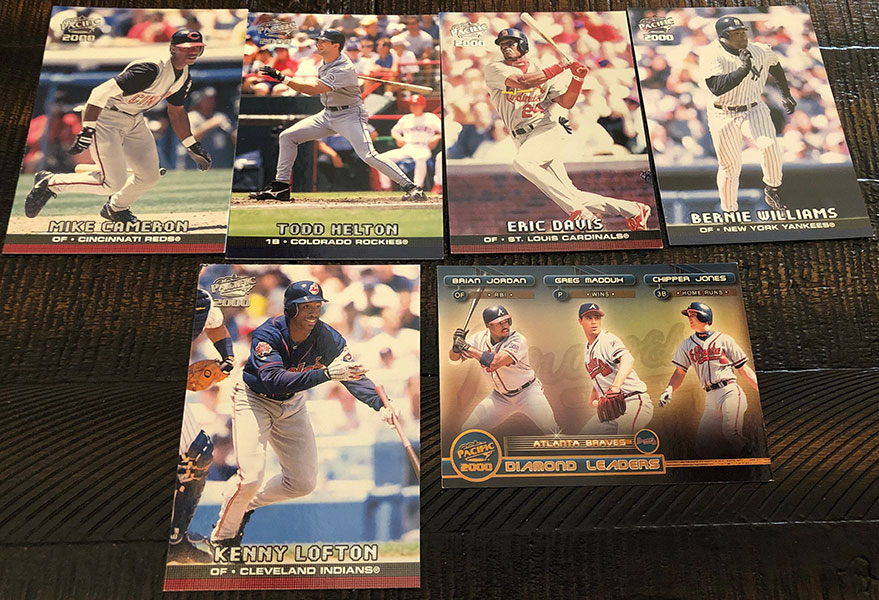 Jason Varitek, Cal Ripken, Jr., Barry Bonds & Scott Rolen Christmas Ornaments (1:12.5 packs). It can be tough to find the Ornaments inserts in good condition because of the nature of the die cuts and because of the attached string.

Pack 18 fun fact: Another one? My brain had just recovered from the first one. I can’t decide if they’re the most absurd thing I’ve ever seen or if I absolutely have to have the entire set on this year’s tree.

Pack 20 fun fact: Roberto Alomar and Omar Vizquel both won the Gold Glove in all three of their seasons as teammates. Alomar finished his career with 10 Gold Glove Awards and Vizquel took home 11.

A couple of Jeffs; Kent & Bagwell 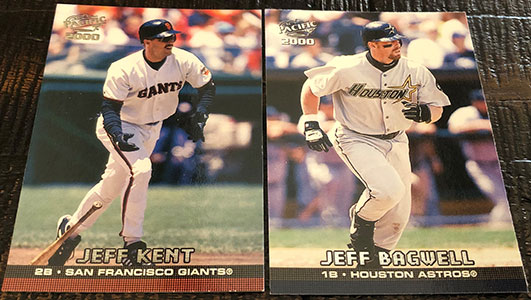 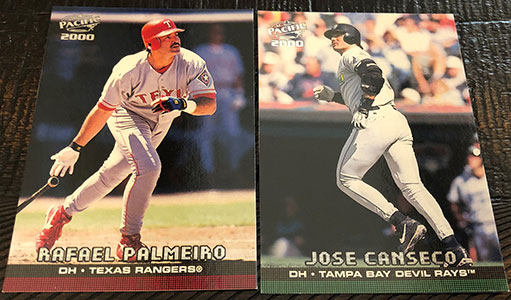 Pack 24 fun fact: Bret Boone hit .251 with 19 home runs and 74 RBI in his lone season with the Padres in 2000. The following year, he had one of the most unlikely late-career breakouts in MLB history.

Lastly, the Pedro card back. One thing I appreciate about Pacific card backs is that they included the set name with the card number. As they produced more and more sets, sometimes they could be fairly easily confused. 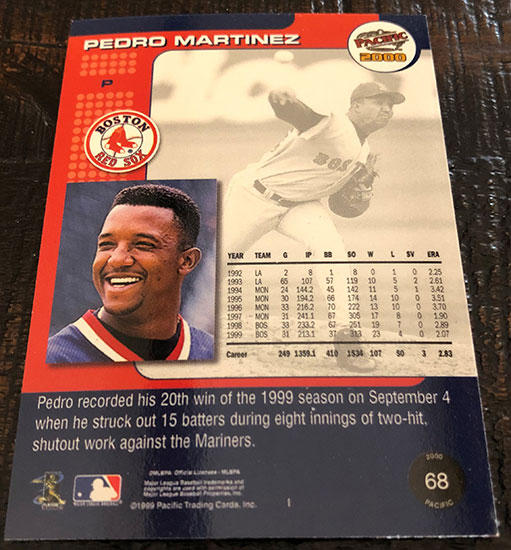 That was something! I had actually never seen the Christmas Ornament cards in person until this box. I’m glad I pulled my expected two and that both came out in fairly good condition. I plan on tracking down some more ornaments at some point. Maybe I can fill in a card room tree someday! The Ornaments insert set continued in 2001 Pacific.

Unfortunately I missed out on the big insert from this set, Cramer’s Choice. These die-cut inserts, named after Pacific CEO Mike Cramer, were found just once in every 721 packs. Pacific did design some really good looking inserts and I am hoping to find some more Pacific products to feature.

Shop for 2000 Pacific Baseball on: