This week, with the flipping of the calendar, we kick off Minor League May. I came up with this themed month on my blog back in 2017 and have showcased 15 different minor league baseball products since then.

Minor league products can be really fun to open. Now, keep in mind that most minor league players never see a major league roster, so these boxes typically aren’t loaded with big names in any real quantity. However, finding some big names pictured in their early minor league uniforms is always a plus. Another benefit — these boxes can often be found extremely cheap.

Team Best released minor league baseball products from 1998 until 2001, often producing many different sets each year. In 1999 alone there was Team Best, Diamond Best, Top Prospects, and this product, Team Best Rookies. The base set features 100 cards, mixing some big names with some even I have never heard of. The product also featured four insert sets: Best Guns, Best Lumber, Best Wheels, and Future Stars. Autographs are also included. 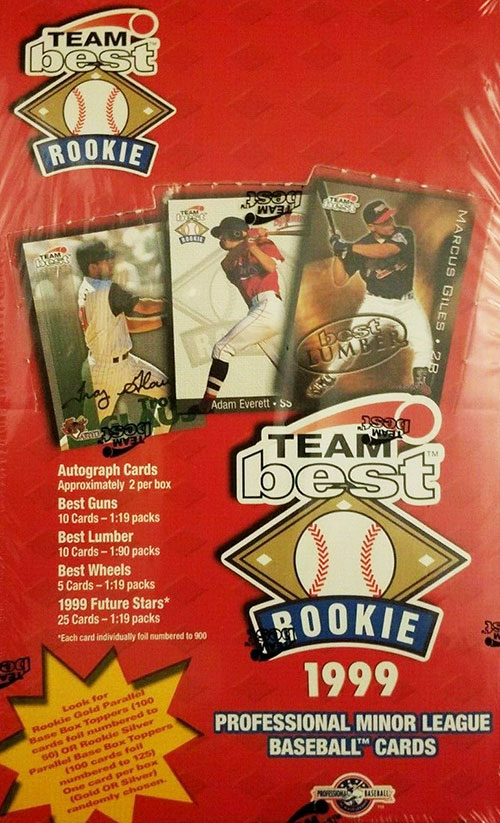 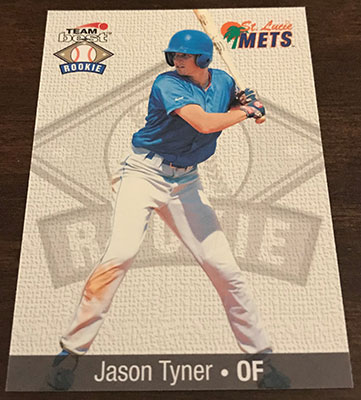 Pack 2 fun fact: How good were the wheels on Nathan Haynes? He swiped 42 bases for Oakland’s High-A affiliate in 1999, and racked up 259 total steals in 12 minor league seasons. 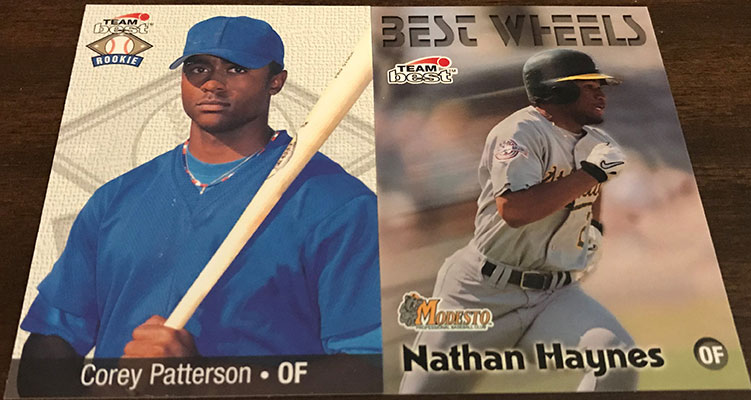 Pack 3 fun fact: Brad Wilkerson finished second in NL Rookie of the Year voting in 2002, behind Colorado Rockies starter Jason Jennings. He had an .840 OPS with 20 home runs and 59 RBI in 153 games. 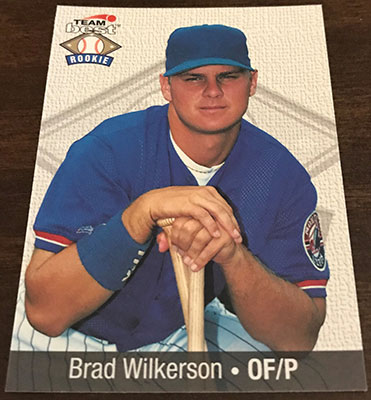 No names I even recognized in this one. These six players combined to appear in three major league games.

Pack 4 fun fact: Yes, this is that Chad Hutchinson. The 6’5” right-hander never developed on the baseball diamond, but he did start 14 games in the NFL. He threw for 2,466 yards with 11 touchdowns and 11 interceptions while going 3-11 for the Dallas Cowboys and Chicago Bears. 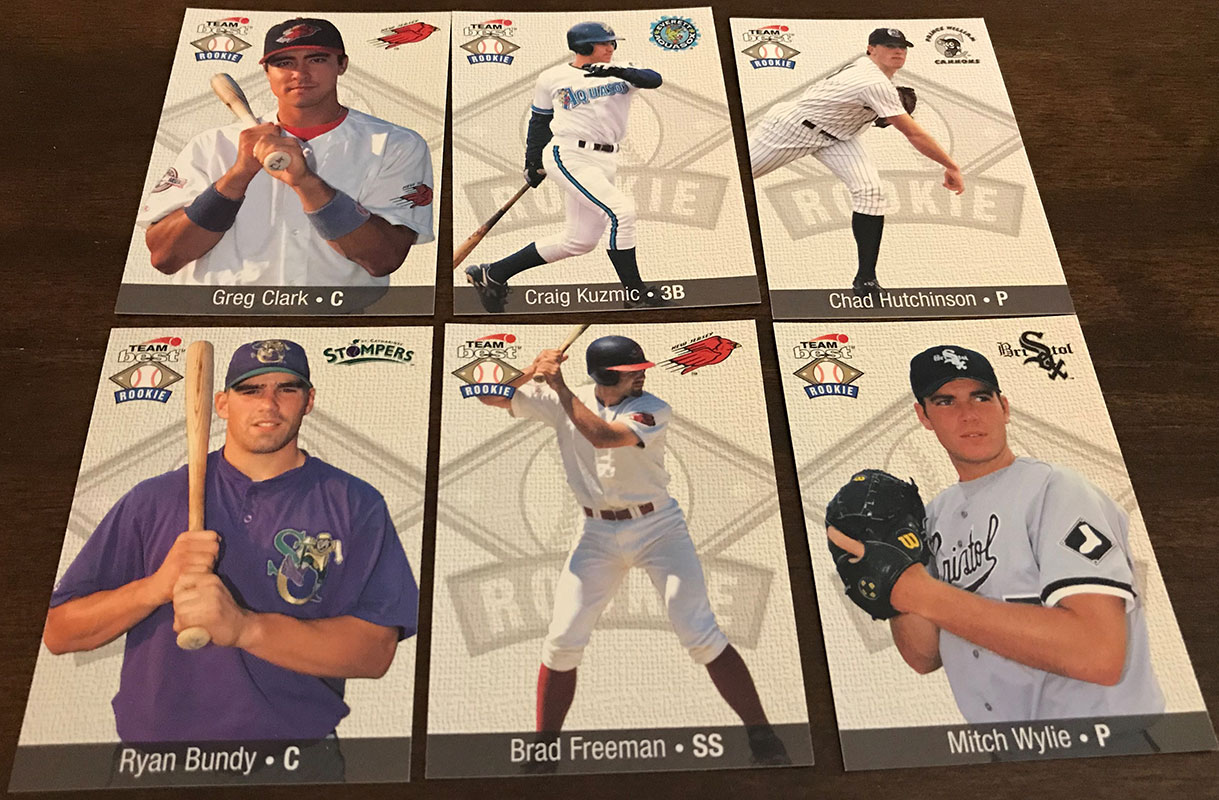 Pack 5 fun fact: Aaron Rowand made the NL All-Star team and won a Gold Glove Award in center field for the Philadelphia Phillies in 2007. 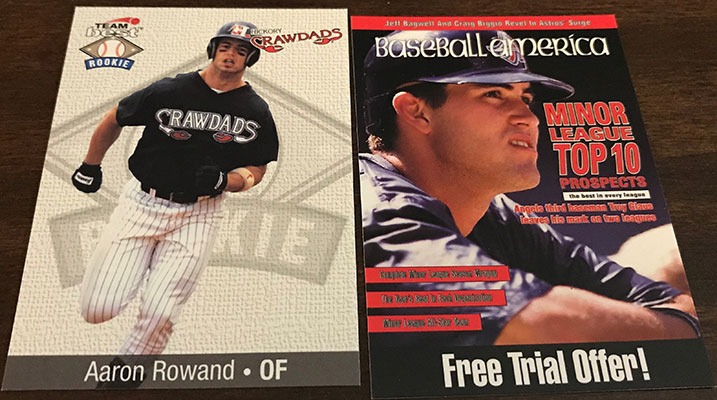 Mark Fischer Autograph (1:8 packs). Not someone who had major league success, but at least for me it was a former Red Sox prospect!

Pack 6 fun fact: Mark Fischer was inducted into the Georgia Tech Sports Hall of Fame in 2008. He had 24 home runs and 98 RBI to earn First Team All-American honors as a junior before going No. 35 overall in the 1997 draft. 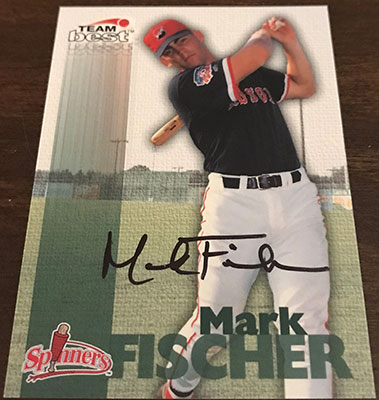 Pack 7 fun fact: Mark Mulder is a terrific golfer. He even played in a PGA event, the 2018 Safeway Open. While he failed to make the cut, he did shoot a respectable +5 over his two days at the event. 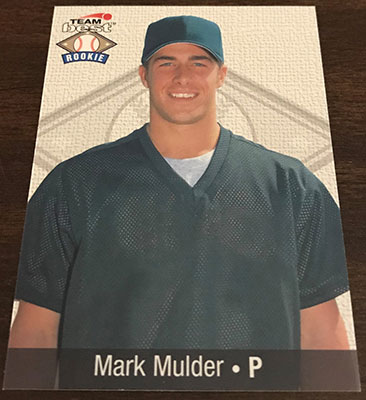 Todd Noel Autograph (1:8 packs). Another player that never made it to the majors. 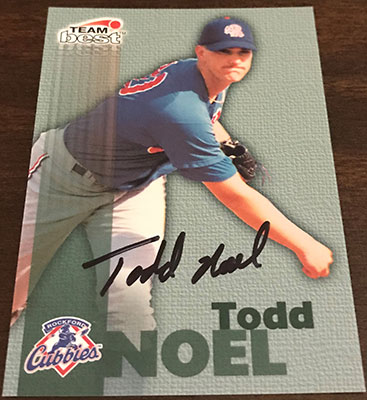 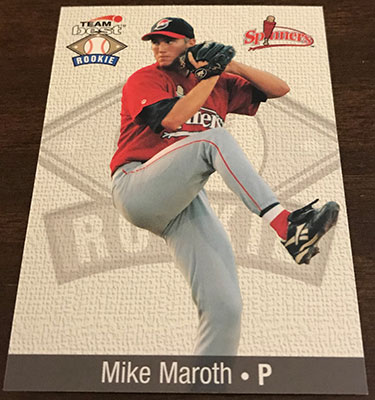 Pack 10 fun fact: Adam Everett was one of the best defensive players in baseball during his prime. He turned in four straight seasons with at least 2.0 WAR from 2003 to 2006 as the Houston Astros starting shortstop. 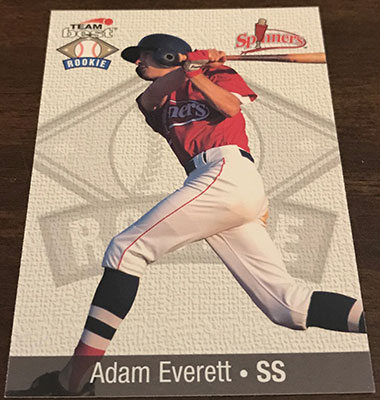 Pack 11 fun fact: The 20-homer, 50-steal club is an exclusive group, with just 11 different players accomplishing that feat at least once in their career. Eric Byrnes is part of the club with a 21-homer, 50-steal season for the Diamondbacks in 2007. 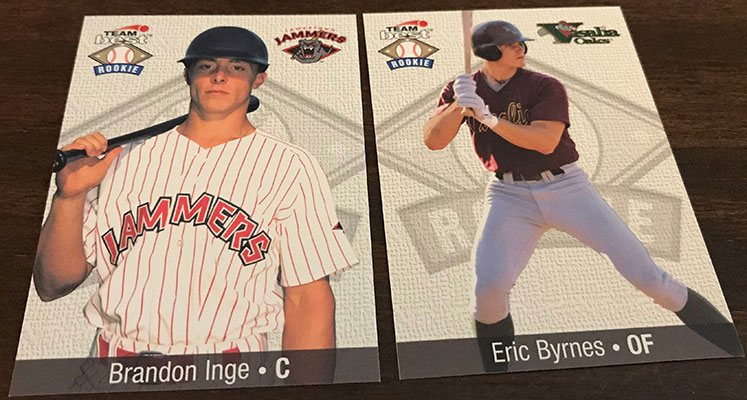 Pack 12 fun fact: This card was likely a hot commodity at the time. Rick Ankiel began the 1999 season as the No. 2 prospect in baseball, according to Baseball America. The following year he moved up to the No. 1 spot on their Top 100 list. 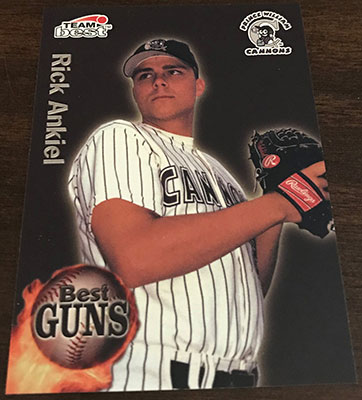 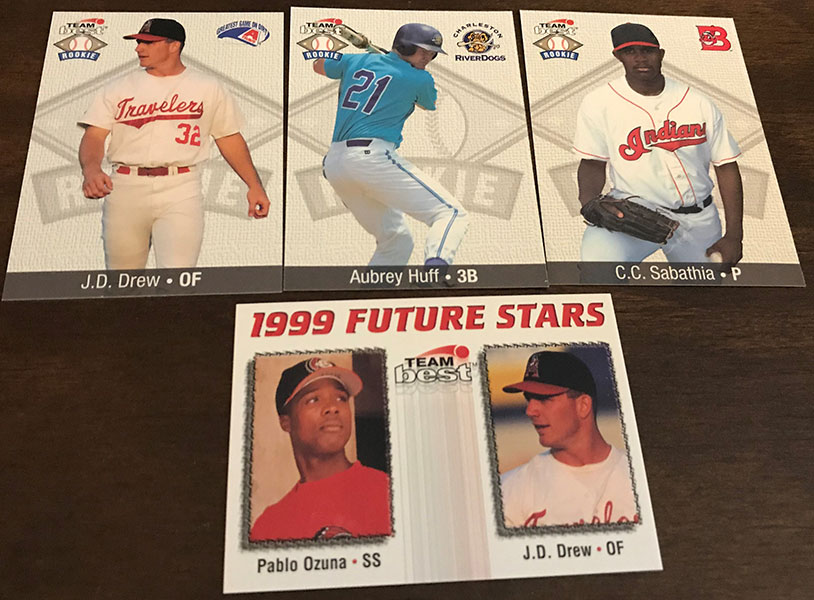 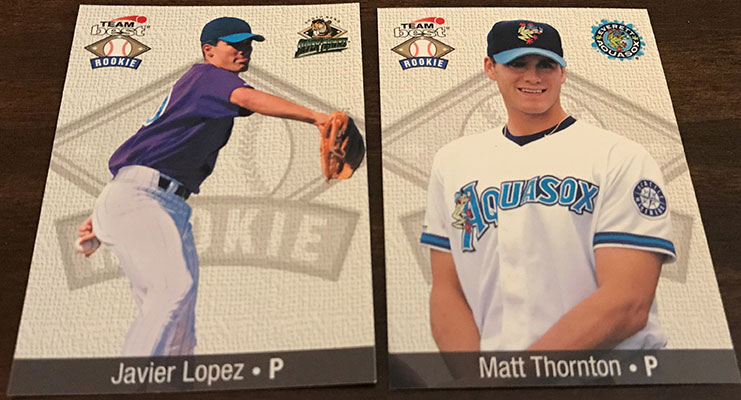 Pack 15 fun fact: You’re really testing my Mark Mulder fun-fact depth, Shane. How about this: His 103 wins are second-most in MLB history among Michigan State alums. The No. 1 spot on that list belongs to Hall of Famer Robin Roberts with 286. 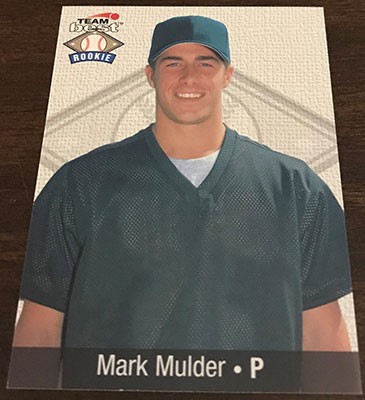 Pack 16 fun fact: Corey Patterson (3rd) and Felipe Lopez (8th) were both top-10 picks in the 1998 draft. Patterson stuck around for 12 MLB seasons, while Lopez played for 11 years. 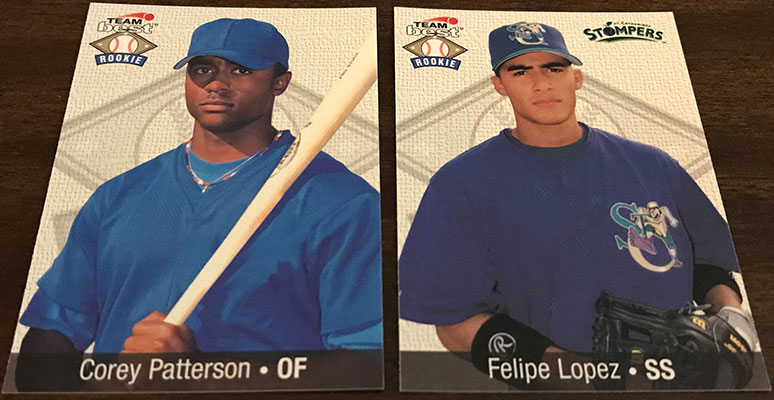 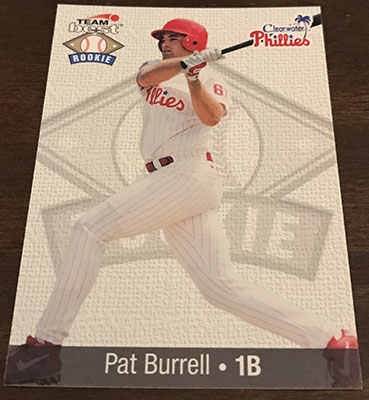 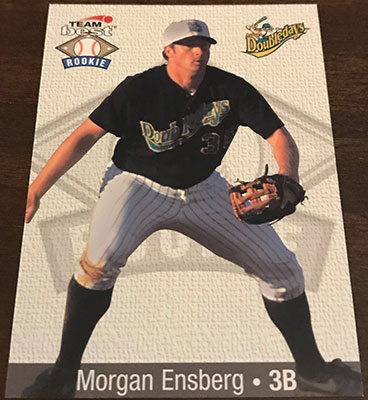 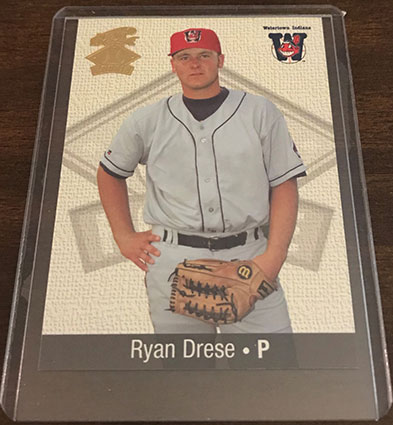 Lastly, the C.C. Sabathia card back, featuring his stats from five rookie league games after being drafted by the Indians in the first round of the 1998 draft. 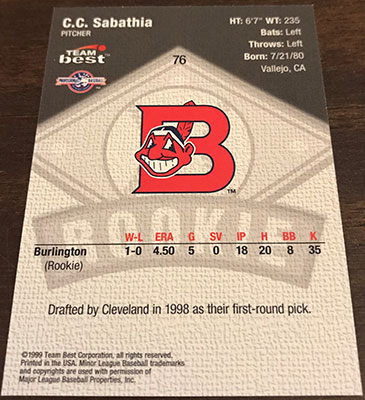 Like I said, most minor league products won’t feature a ton of star potential. But there are still big names to be found. The team names alone make these products worth a shot, especially at under $10 a box. Where else are you going to find a card featuring Aaron Rowand playing for the Crawdads? Or J.D. Drew suiting up for the Travelers? And yes, Sabathia is pictured in an Indians uniform, but not the Cleveland Indians. That would be a Burlington, North Carolina Indians jersey. How many of those have you come across?

Could Signing with the Cowboys Bode Well ...