Upper Deck debuted SP Top Prospects in 1995. It wouldn’t surprise me if at least part of the decision was to take advantage of Michael Jordan’s 1994 season playing minor league baseball for the Birmingham Barons. MJ was featured in the promo set advertising the product. When the set came out Jordan wasn’t in the base set, he does have his own four-card insert set. He also signed autographs for the product.

After 1995, however, SP Top Prospects disappeared. The product made a return in 1998 and had a four-year run, retiring for good after the 2001 release.

1998 SP Top Prospects was considered a super premium set by Upper Deck. The price on release day? Over $4 per pack.

The base set looks very similar to the box cover and features foil accents. The top of the base cards are black, causing them to be very condition sensitive. The first ten cards in the 126-card base set highlight the best youngsters at the time in a subset titled Top 10 Prospects. Each player also has a regular base card. 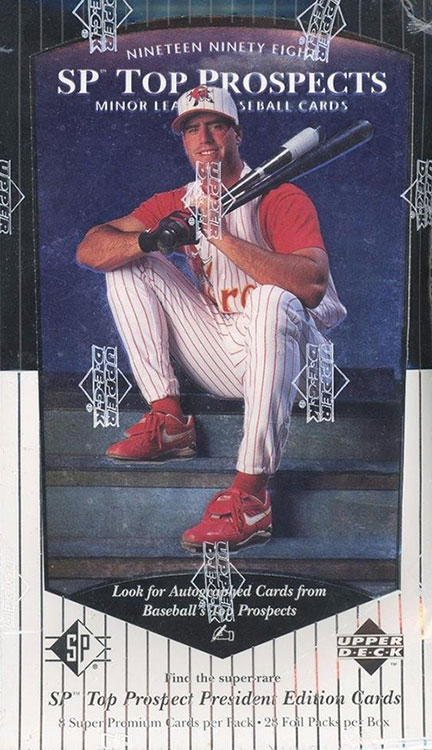 In addition to the base set the product also features two insert sets, Small Town Heroes and Destination: The Show. There’s also a 27-card autograph set. Though there were many notable names in the autograph set, the highlight would have be sure-fire Hall of Famer Adrian Beltre.

Each card, base and insert, has an extremely tough to pull President’s Edition parallel card, limited to just ten copies. 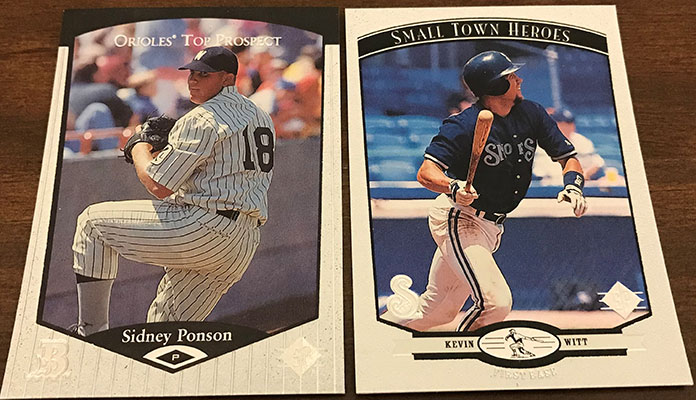 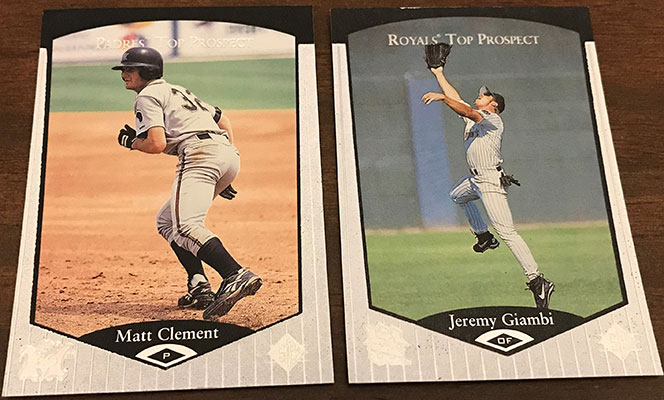 Pack 3 fun fact: Ben Grieve won AL Rookie of the Year in 1998 and earned a spot on the AL All-Star team. He was one of a whopping 23 first-time All-Stars that year. 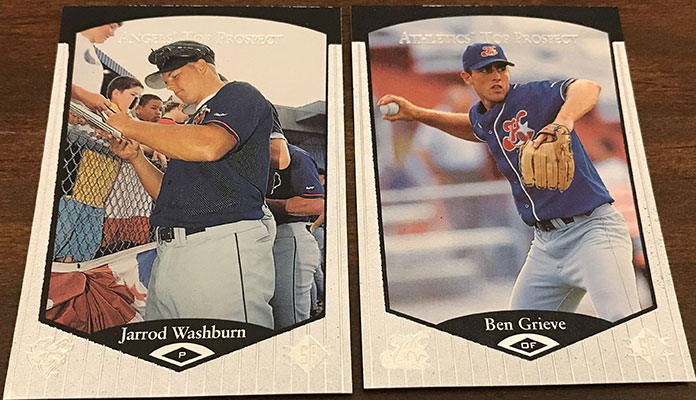 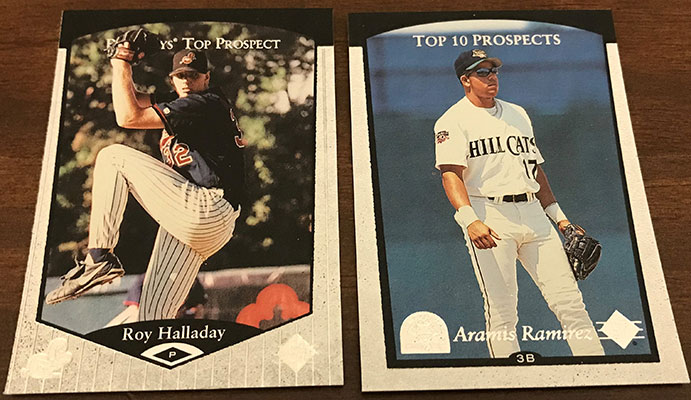 Pack 7 fun fact: David Ortiz actually began his career in the Mariners organization before he was traded to the Twins in exchange for veteran third baseman Dave Hollins on Aug. 29, 1996. 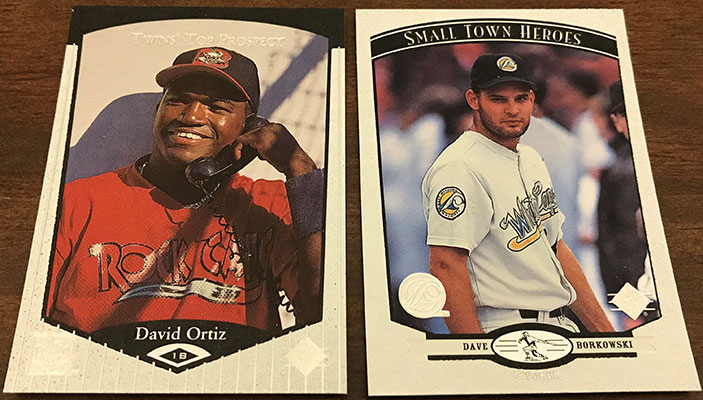 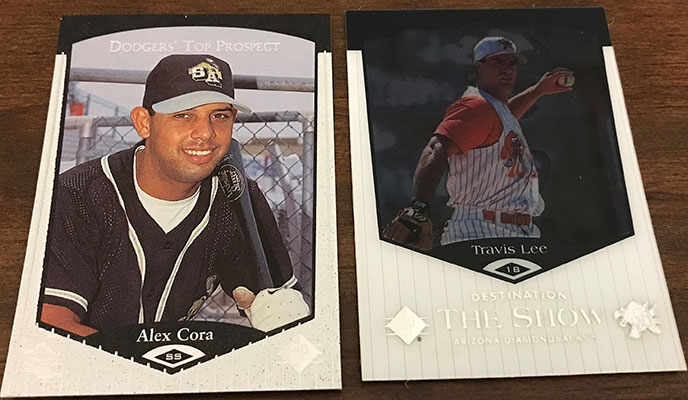 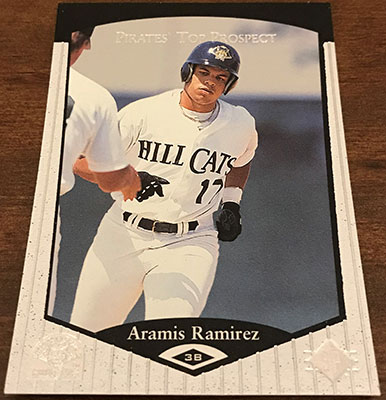 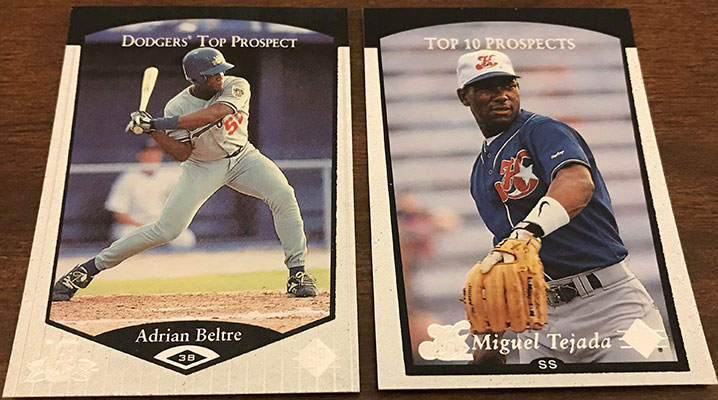 Pack 11 fun fact: Juan Encarnacion was one of the top prospects in baseball during his time in the Tigers farm system. He checked in at No. 15 on the Baseball America Top 100 list prior to the 1998 season. 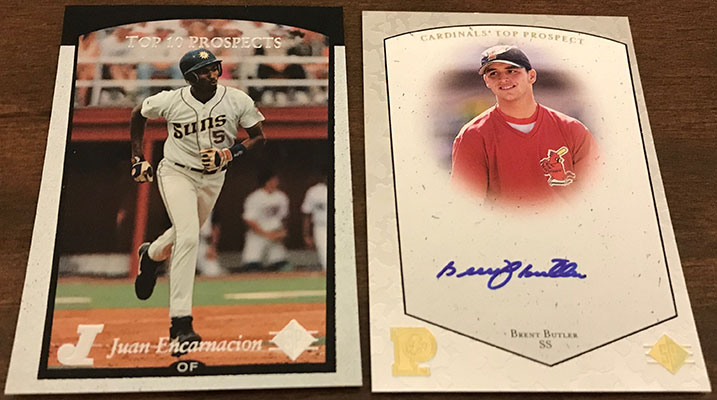 Pack 13 fun fact: A.J. Hinch was traded from Oakland to Kansas City as part of the three-team, seven-player deal that sent Johnny Damon to the Athletics prior to the 2002 season. 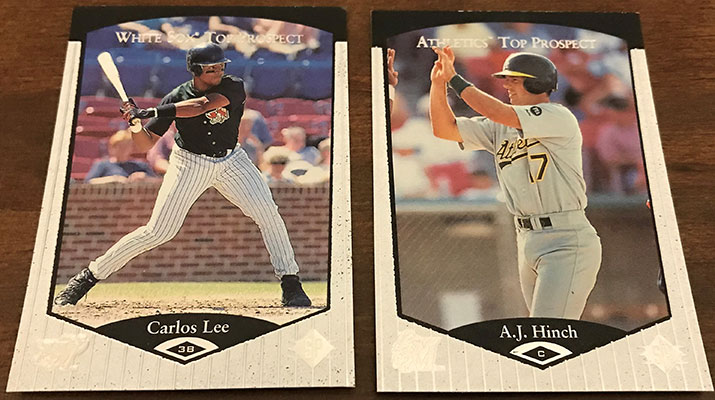 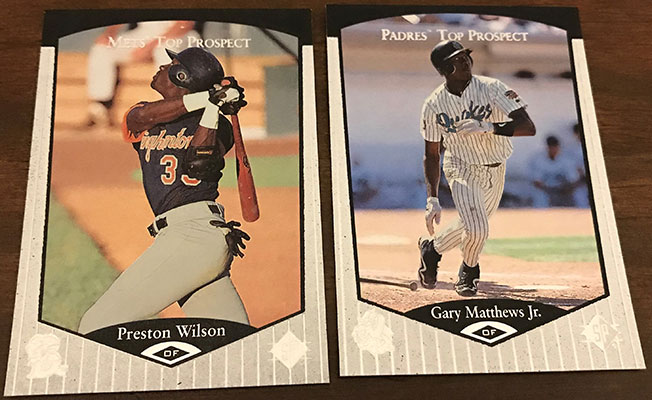 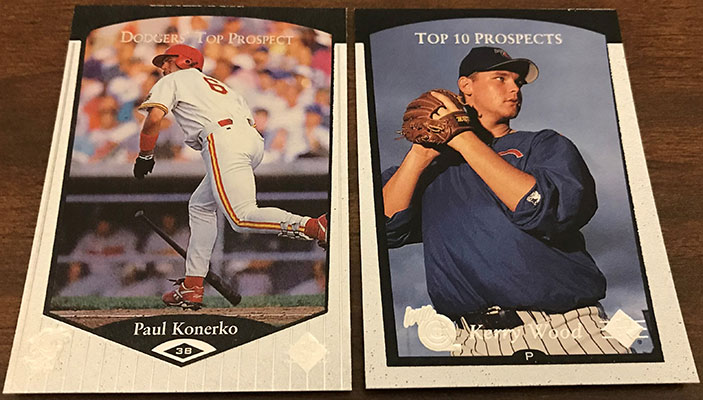 Bonus fun fact: Ben Davis laid down a bunt single to break up Curt Schilling’s perfect game in the eighth inning in 2001. It remains hotly debated whether that was an okay move in a 2-0 game. 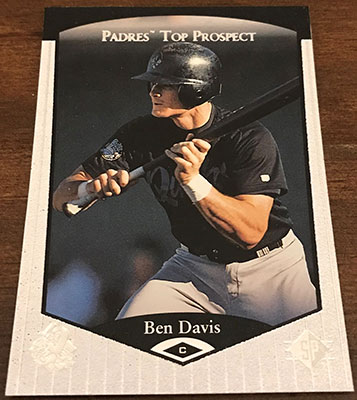 Pack 17 fun fact: Alex Sanchez stole 89 bases over his first two full seasons in the majors and 122 total in his five-year career. He was also caught stealing 58 times for a 67.8 percent success rate. 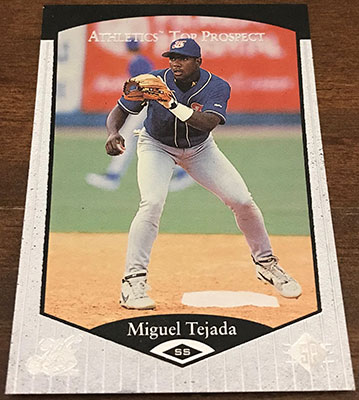 Pack 19 fun fact: Travis Lee, once a hot commodity in the card-collecting world, was part of the four-player package the Diamondbacks sent to the Phillies to acquire Curt Schilling. 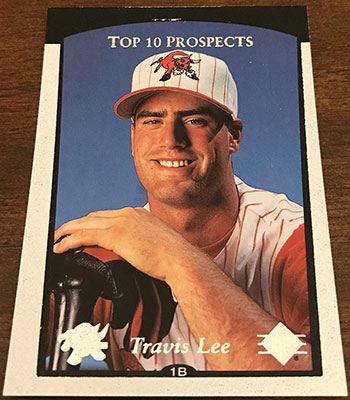 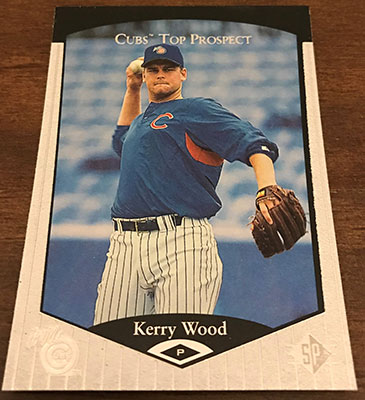 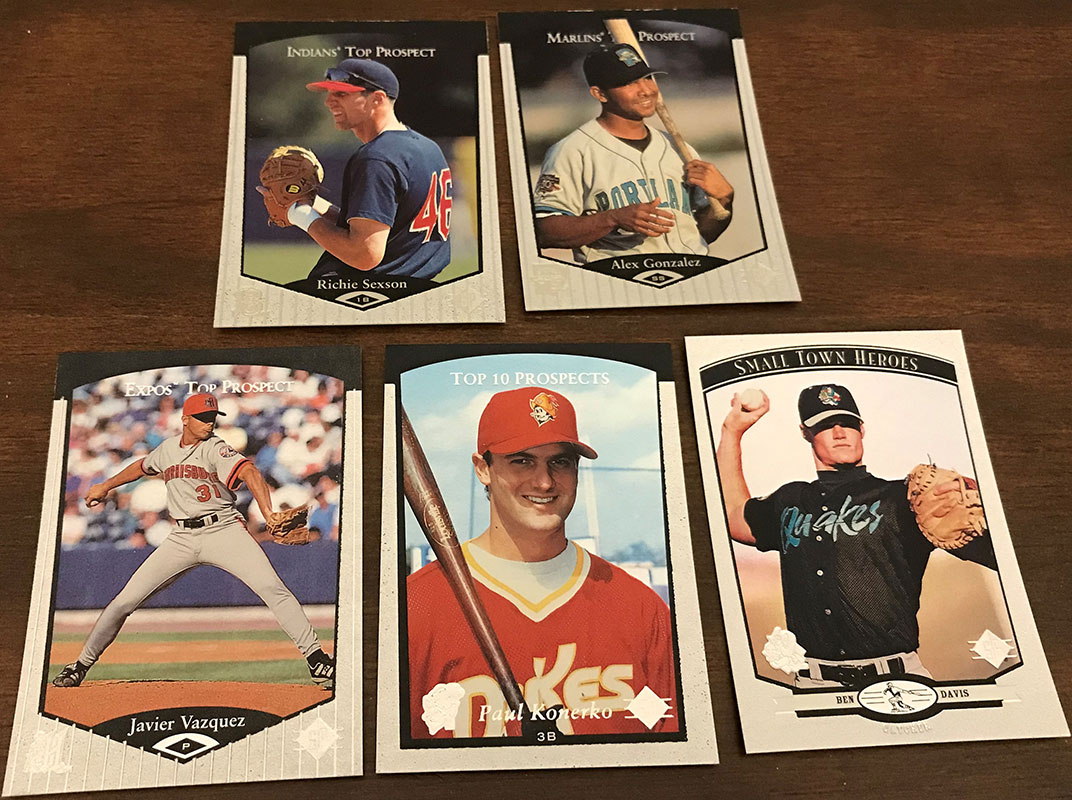 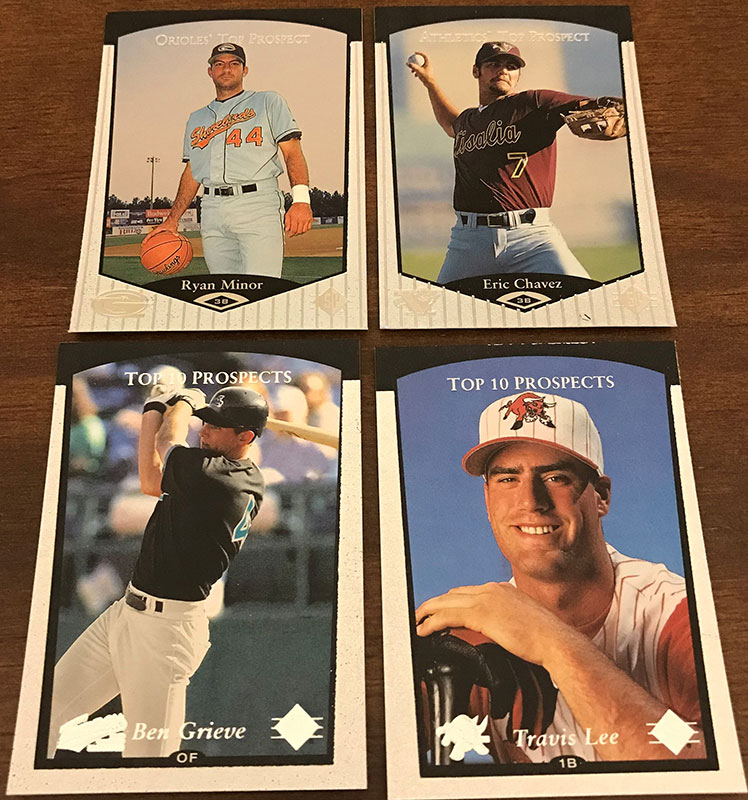 Pack 23: Braden Looper spent his first nine seasons pitching exclusively in relief before averaging 32 starts and 190 innings over the final three years of his career. Not a career progression you see very often. 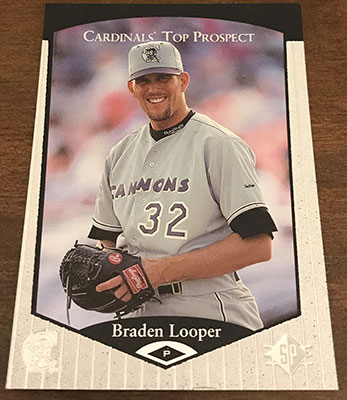 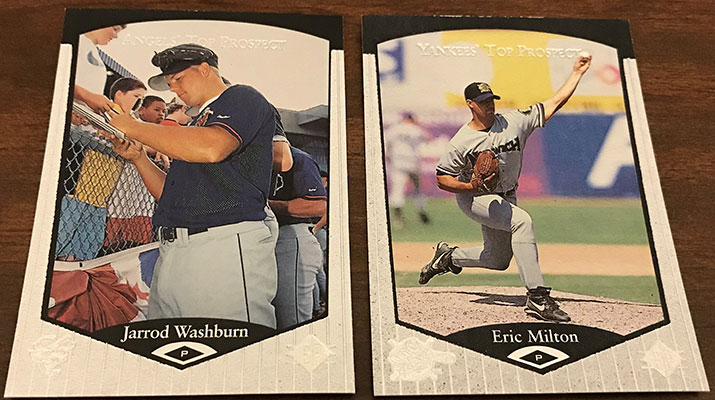 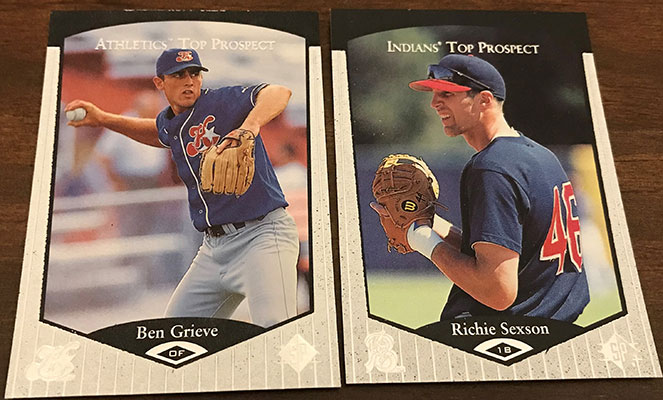 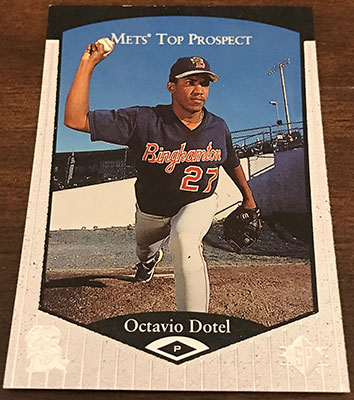 Pack 27 fun fact: Carl Pavano is shown here in a Red Sox uniform, but he was actually traded to the Expos prior to the 1998 season. That deal brought back a decent starter named Pedro Martinez. 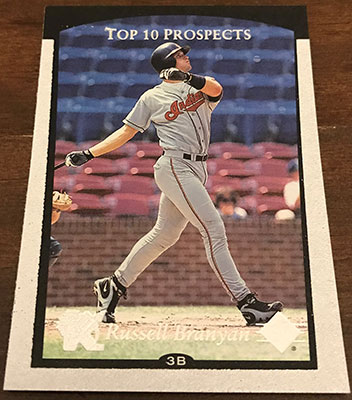 Lastly, the Roy Halladay card back. 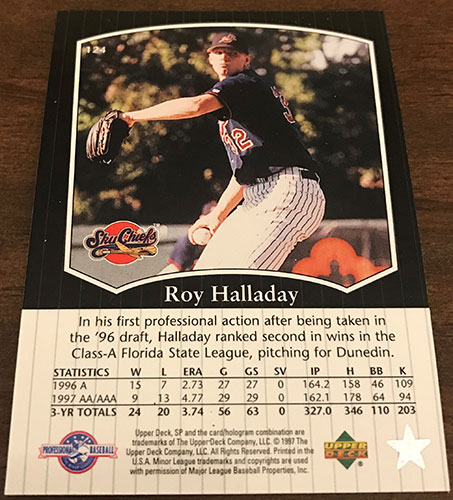 I really like the look of this base set. They’re really sharp looking cards. As you know, I always enjoy adding cards of players pictured in their minor league duds, so this product is right up my alley.

Pulling a couple of autographs from a $23 box is always a plus. Do I wish my two autos were Adrian Beltre and Kerry Wood? Of course, but luck wasn’t with me today.

Another great addition to this set is the Destination: The Show insert set. The combination of attractive acetate inserts and Travis Lee would’ve been big back in 1998.

Be sure to check back next week for another minor league featured product!