Leaf released their first baseball card set in 1949. It’s a landmark release that features Rookie Cards of Stan Musial, Satchel Paige and Jackie Robinson. After just one more vintage era release in 1960 (a set that included a marble in each pack), Leaf didn’t release another baseball set until 1985. They continued through 1998 with the exception of 1989. Those 1980s sets were basically the Canadian versions of Donruss, similar to how O-Pee-Chee was for Topps. But in 1990 that changed and Leaf became its own thing. Leaf popped back up producing licensed sets from 2002-2005. 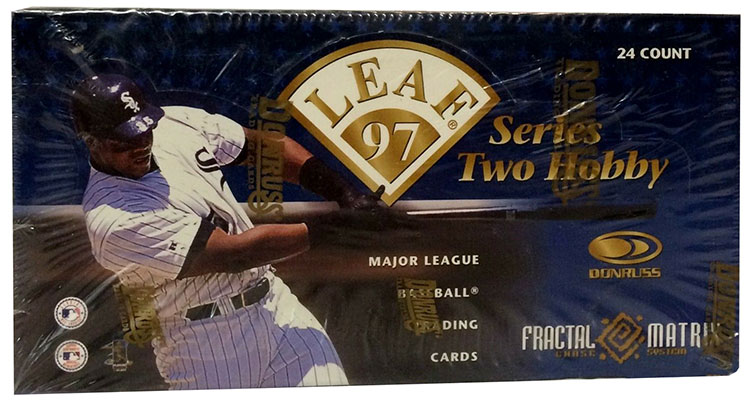 1997 Leaf Baseball consists of two 200-card series. Though the base cards from both Series 1 and 2 look nearly identical in style, there is an easy way to tell the two apart from the fronts. Series 1 has silver edges. In Series 2, they’re almost white. I actually prefer the Series 1 design just because the sides seem to blend better.

Both releases contain the same two subsets, Gamers and Legacy. The parallels are also the same. One of the better looking parallels of its time, Fractal Matrix parallels could be found in Bronze, Silver, and Gold. The parallels could also be found in three different die cut patterns. Despite all the different colors and shapes, only two versions of each base card parallel was produced. Each base card was assigned a color and die cut shape. For example, parallels of card #201 Chipper Jones, were only found in the Gold and Gold X-Axis versions.

In addition to the subsets and Fractal Matrix parallels, 1997 Leaf Series 2 Baseball features five different insert sets all of which are serial numbered. 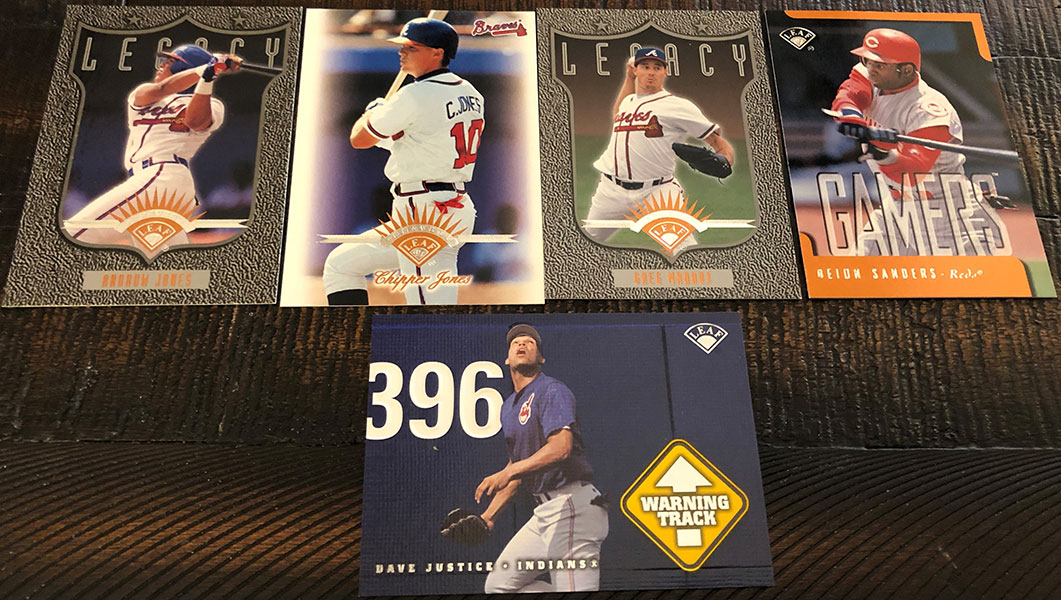 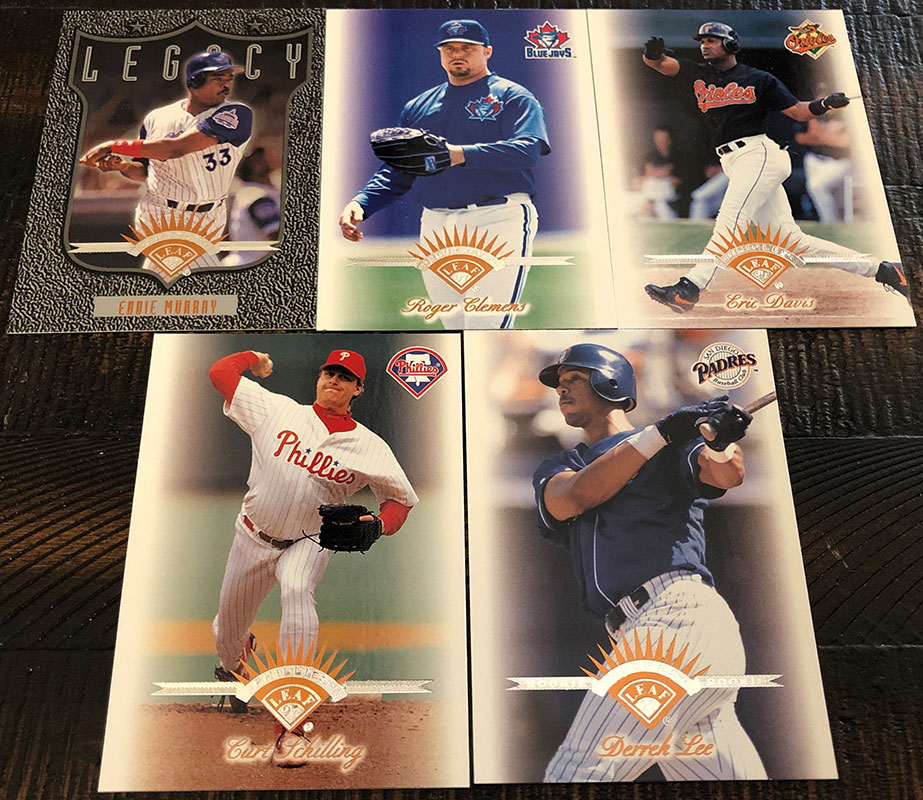 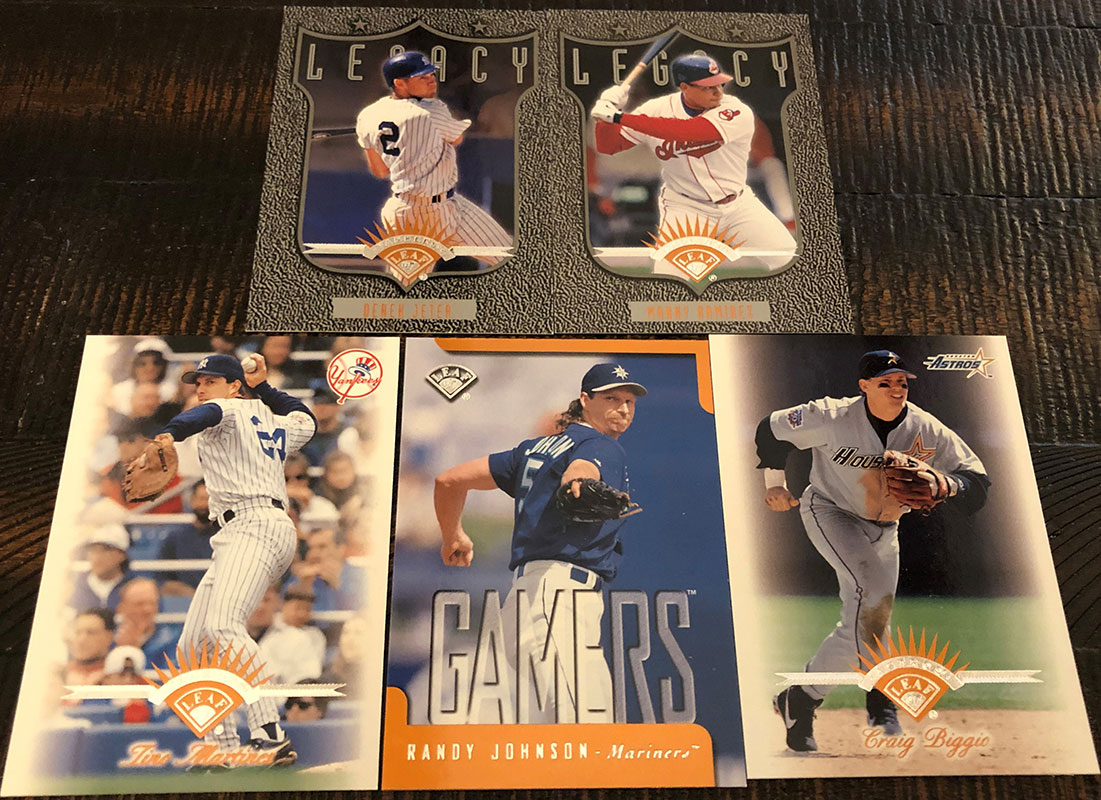 Pack 4 fun fact: After briefly retiring in 1995, Ryne Sandberg returned for two more seasons, wrapping up his Hall of Fame career playing for a 94-loss Cubs team in 1997. 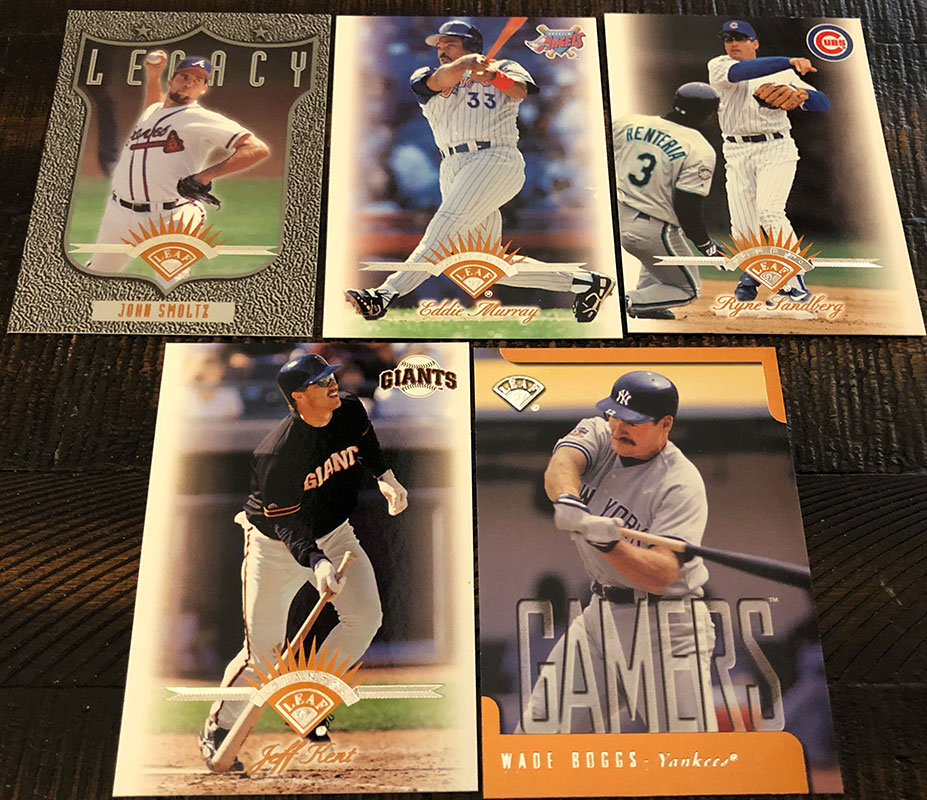 Pack 5 fun fact: Jimmy Key finished second in Cy Young voting twice in his career. He led the AL in ERA (2.76) while pitching for the Blue Jays in 1987, and paced the AL in wins (17) during the strike-shortened 1994 season.

Pack 6 fun fact: After a 24-game debut in 1996, Nomar Garciaparra took over as the Red Sox starting shortstop in 1997 and won AL Rookie of the Year honors. He hit .306 with 85 extra-base hits and 22 steals, making headlines with a 30-game hitting streak.

Pack 9 fun fact: Jose Canseco began his second go-around with the Athletics in 1997, coming over in a trade with the Red Sox prior to the season. His 254 home runs in an A’s uniform rank fourth in franchise history.

Alex Rodrguez & Ken Griffey, Jr. Imagine if both of these guys spent their whole careers in Seattle.

Pack 10 fun fact: In their four full seasons together from 1996 to 1999, the Mariners averaged 83 wins and made the playoffs just once in 1997. If only they had some pitching behind Randy Johnson. 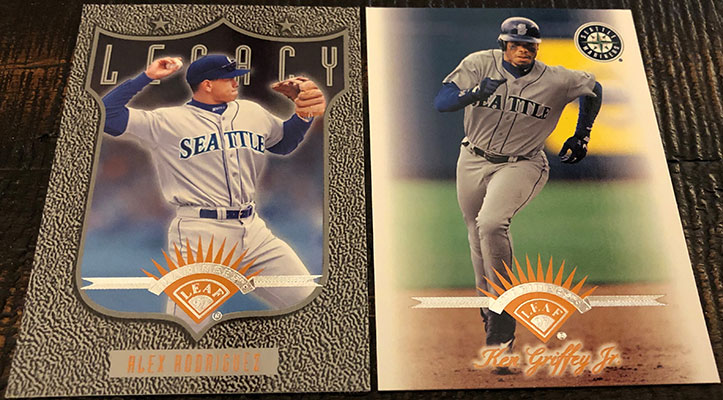 Pack 11 fun fact: Dennis Eckersley saved 36 games in 43 chances for the Cardinals in 1997 at the age of 42. He spent one more season in the majors before wrapping up a 24-year career.

Pack 12 fun fact: The Indians traded Kenny Lofton to the Braves prior to the 1997 season in exchange for David Justice and Marquis Grissom. He spent one season in Atlanta before rejoining the Indians in free agency during the offseason.

Pack 15 fun fact: Bobby Bonilla finished second in RBI (97) on a 1997 Marlins team that went on to win the World Series. 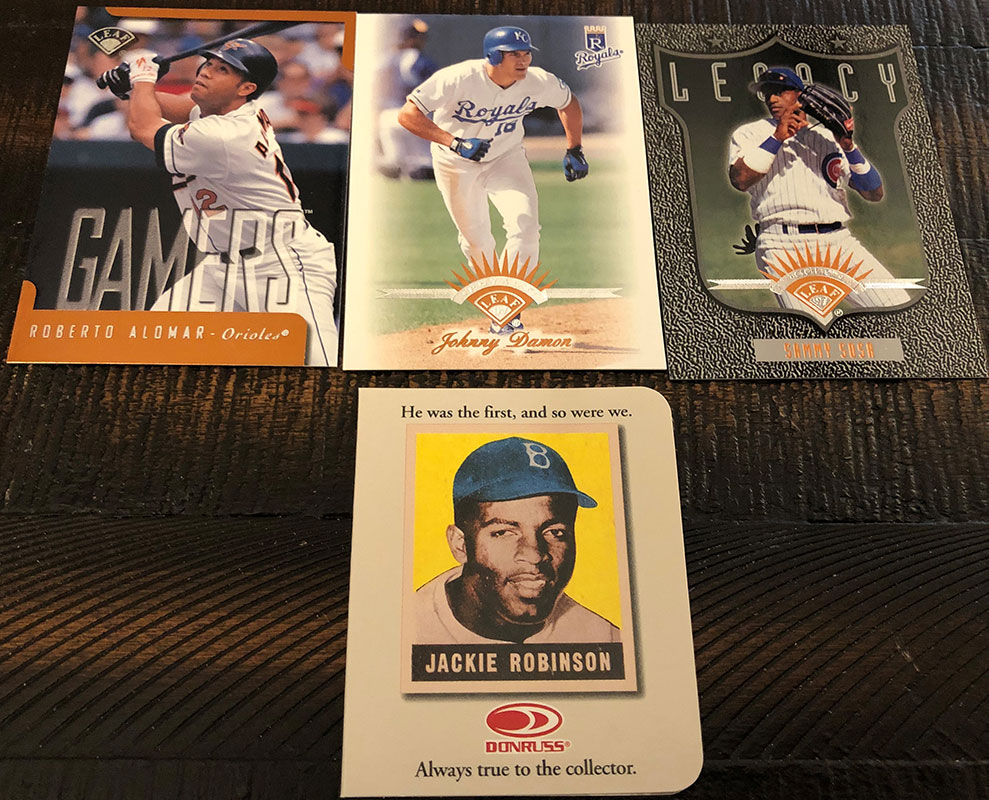 The Jackie Robinson Sweepstakes cards were found 1 in every 12 packs and gave you the opportunity to win one of five copies of his Rookie Card. I cringed and scratched both cards that I found. Luckily neither was a winner. That would have hurt. 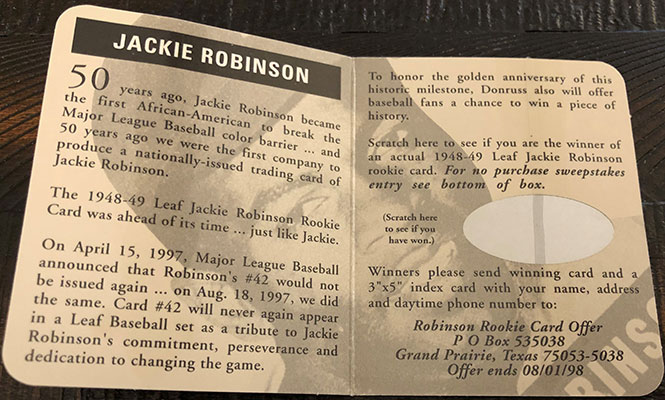 I had to show this one off again. These cards were stamped with 22 karat gold leaf! 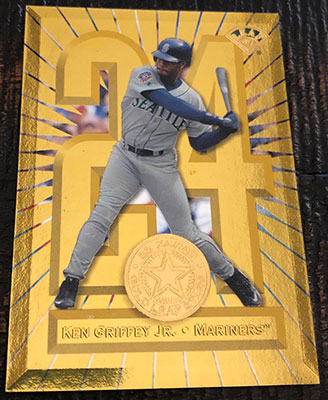 Pack 19 fun fact: Bartolo Colon made his MLB debut on April 4, 1997. He allowed six hits and four earned runs in five innings of work for a no-decision. His first career strikeout was Jim Edmonds in the first inning. 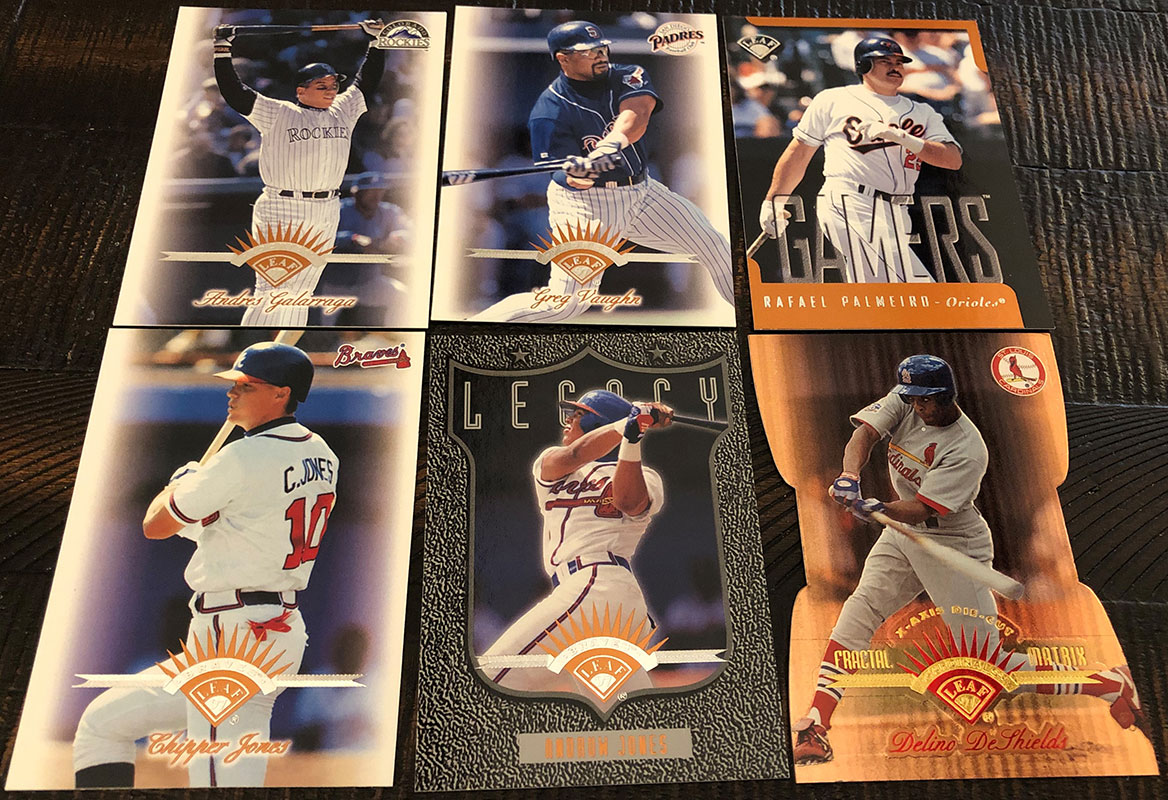 Pack 21 fun fact: Albert Bell signed a five-year, $55 million contract with the White Sox prior to the 1997 season, making him the highest-paid player in baseball at the time.

Bubba Trammell (Remember him? He was supposed to be the next Tigers star Trammell!), Barry Larkin, Curt Schilling & Eddie Murray 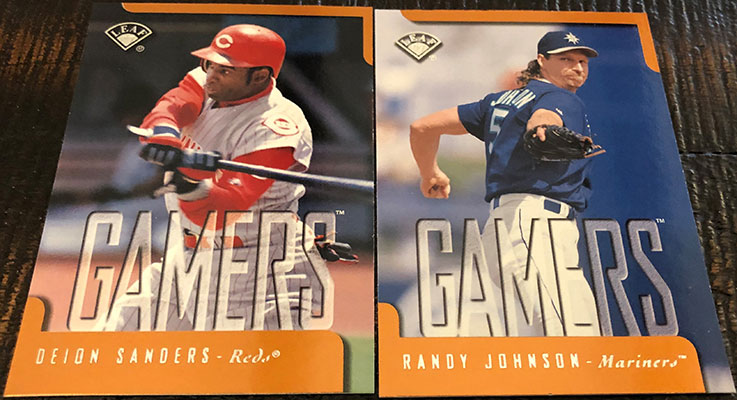 Pack 24 fun fact: In a six-player blockbuster deal prior to the 1997 season, the Giants traded All-Star third baseman Matt Williams to the Indians in exchange for Jeff Kent and highly-regarded pitching prospect Julian Tavarez.

Lastly, the Jeff Kent card back. Though I am a stat guy and love to see full career stat lines on the back, I do appreciate the full action shot. 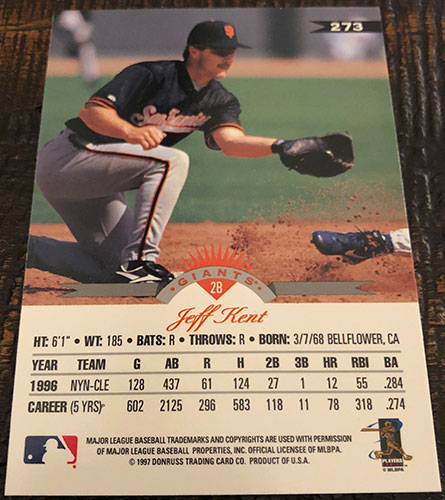 That was a fun break. The parallels and the inserts were all well done and great looking cards. Also, the ’90s sets were absolutely loaded with Hall of Fame players. For those that were not keeping track at home, there were 41 cards featuring players already elected to the Baseball Hall of Fame. I suspect that number will increase in the coming years.