The Studio brand made its debut in 1991 and featured some studio glamour shots and no insert cards. The brand continued to feature portrait-style photographs until a major pivot in 1995 — the year cards were made to look like credit cards. Though I actually like the look of the 1995 set, it didn’t line up with the style Studio was known for.

1996 Studio Baseball returned to portraits. Leaf decided to go with close-up photos on each base card.

The base set is on the small side, consisting of just 150 cards. Each base card also has three press proof parallels. Bronze Press Proofs are limited to 2,000 copies, Gold Press Proofs have 500 copies, and Silver Press Proof cards (found only in magazine packs) have print runs of just 100 copies each.

Also found in 1996 Studio packs are three attractive insert sets. Stained Glass Stars are die-cut acetate cards found once in every 24 packs. Hit Parade inserts are serial numbered to 5,000 copies and resemble records sliding out of their album cover. These are found once in every 48 packs. Lastly, Masterstrokes inserts, also limited to 5,000 copies, are art-based cards printed on canvas style card stock. These land 1:96 packs. 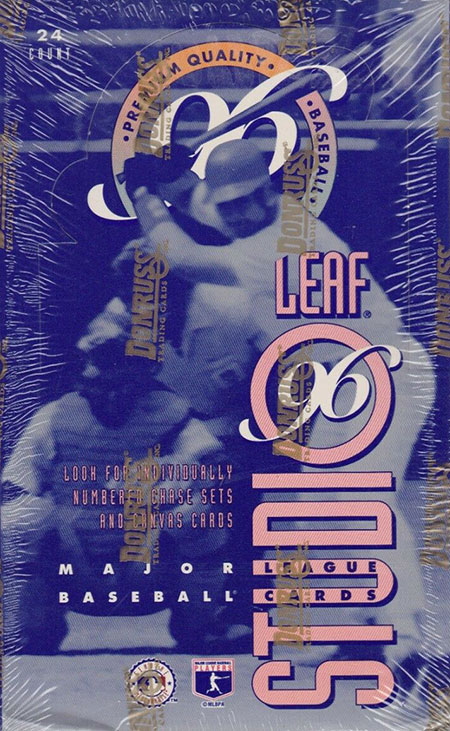 Pack 1 fun fact: Rickey Henderson had 125 walks and a .410 on-base percentage in his first season with the Padres in 1996. He was 37 years old and still seven years away from retirement. 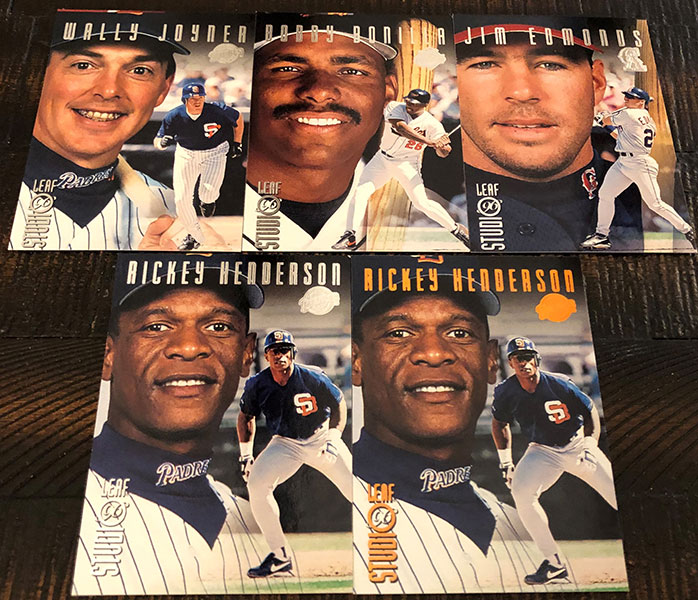 Pack 2 fun fact: Ken Caminiti won 1996 NL MVP honors with a .326/.408/.621 line that included 40 home runs and 130 RBI. He took home the hardware unanimously, finishing comfortably ahead of Mike Piazza and Ellis Burks in the balloting. 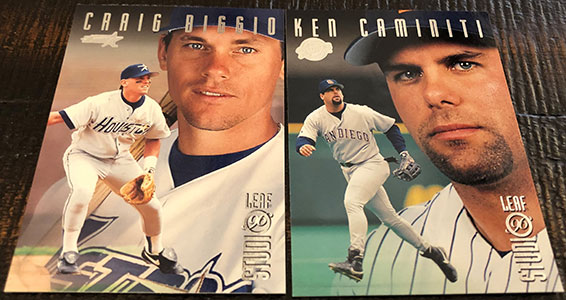 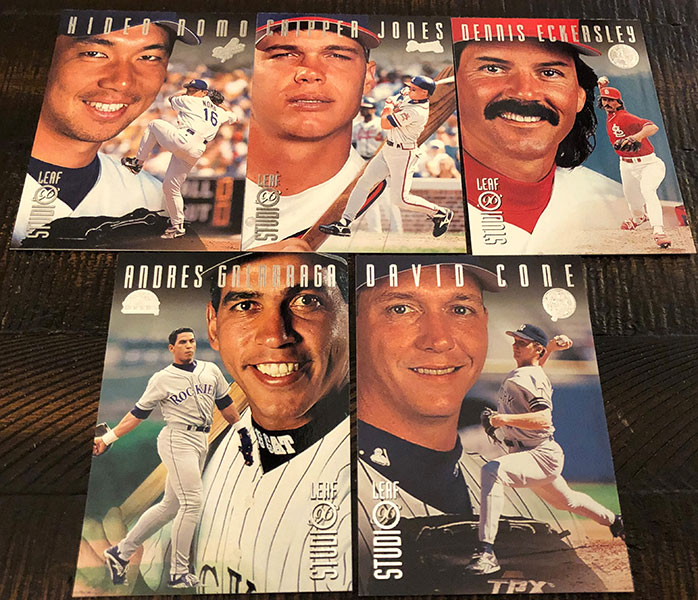 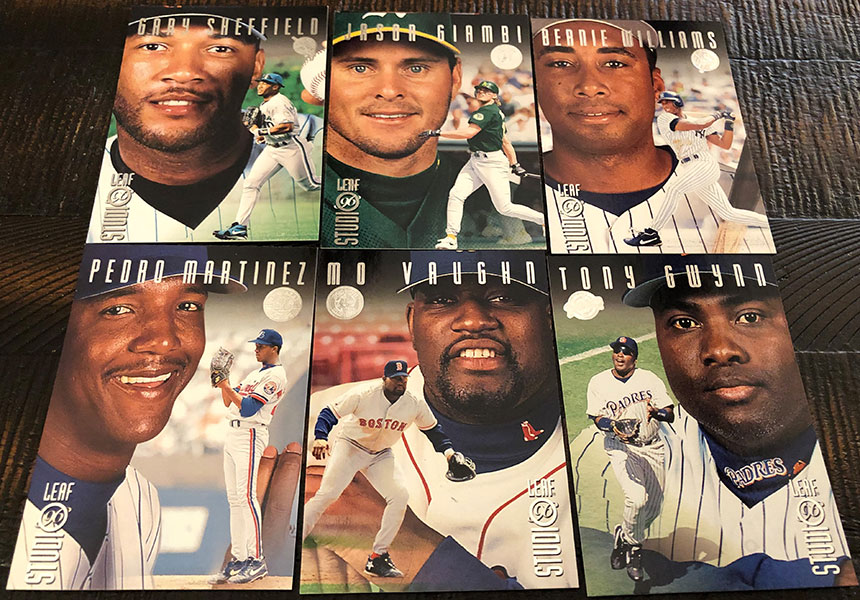 Pack 7 fun fact: Sammy Sosa had his first 40-homer season in 1996, something he did six more times on his way to 609 career long balls. 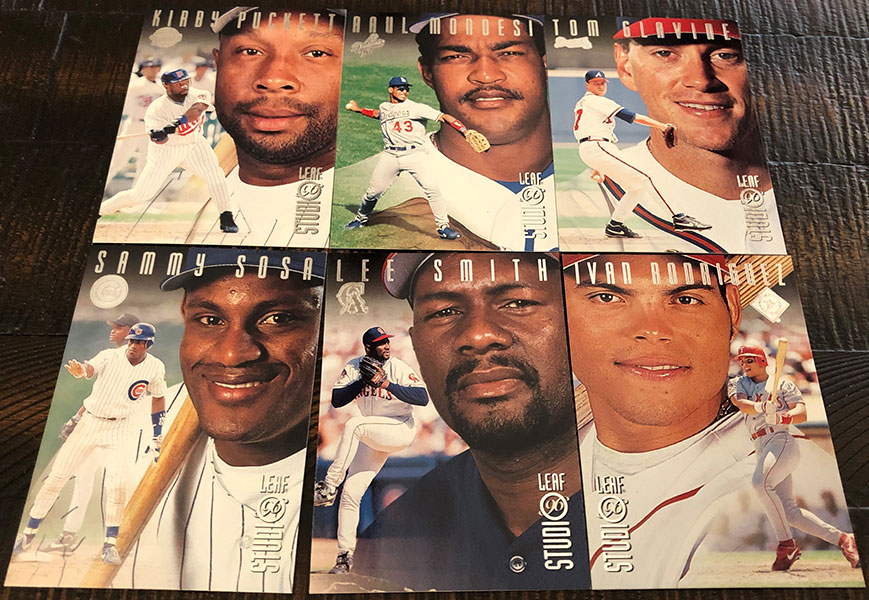 Pack 9 fun fact: Randy Johnson missed nearly three months with a back injury during the 1996 season, and he pitched out of the bullpen upon returning to action in August. He earned his second career save on Aug. 13, striking out eight batters over four scoreless innings.

Pack 10 fun fact: Eddie Murray hit his 500th career home run on Sept. 6, 1996 as a member of the Baltimore Orioles. The Cleveland Indians traded him at the deadline in exchange for left-hander Kent Mercker.

Ryne Sandberg, Troy Percival, Mark McGwire & Quilvio Veras Bronze Press Proof /2,000 (1:24 packs). If I was a Veras collector I would be pretty excited about this box!

Pack 11 fun fact: There were likely more than a few Veras collectors when this product was first released. He had just finished third in NL Rookie of the Year voting in 1995, posting a .384 on-base percentage and leading the NL with 56 steals.

Pack 13 fun fact: A young Jason Giambi had 40 doubles and 20 home runs in his first season as an everyday player in 1996. Four years later, he won AL MVP. 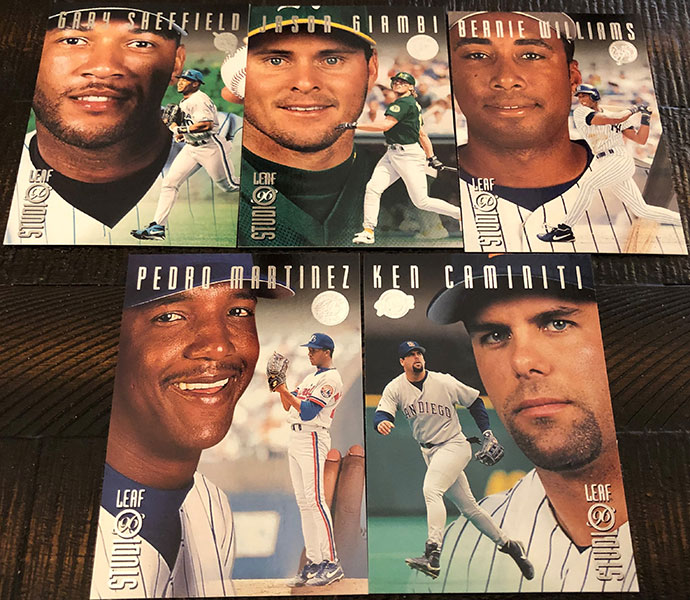 Pack 16 fun fact: Joe Carter made his final All-Star appearance and had his final 30-homer season in 1996 at the age of 36. The five-time All-Star finished his career with 396 long balls in 16 seasons.

Pack 18 fun fact: Mike Mussina went 0-3 with a 6.32 ERA in three starts against the Yankees in 1996. He went 19-8 against everyone else and finished fifth in AL Cy Young voting. 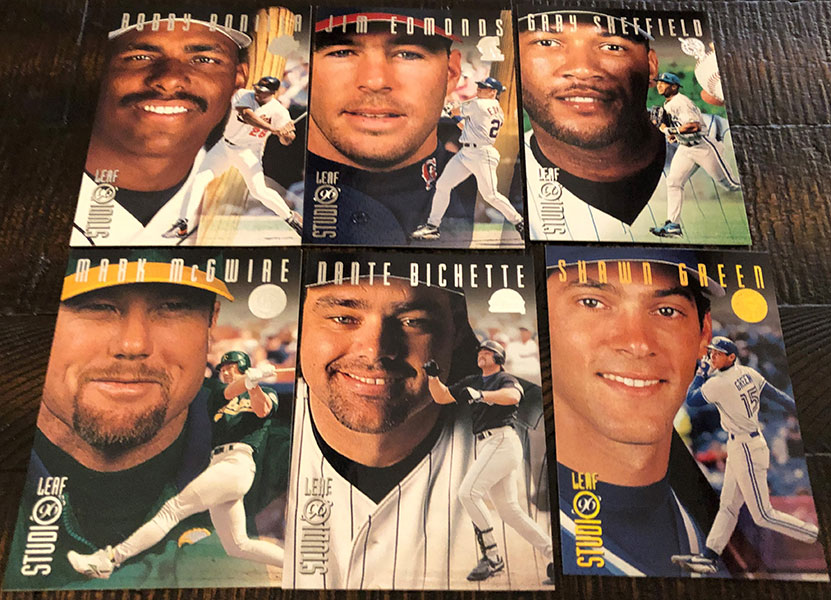 Pack 24 fun fact: The Angels selected Garret Anderson (fourth round) and Troy Percival (sixth round) as part of the same 1990 draft class. 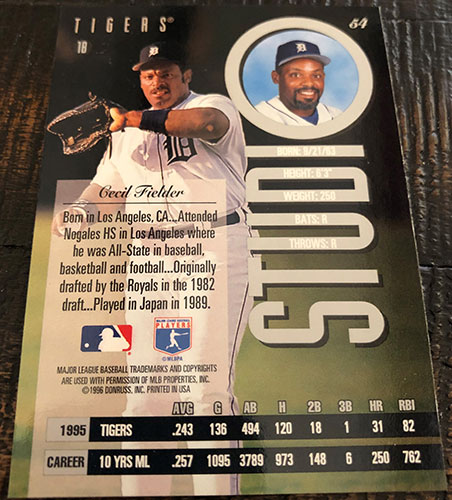 Unfortunately I didn’t pull any of the three insert sets! As odds have it, I should have at least pulled a Stained Glass Stars card, but it looks like I pulled a second Gold Press Proof card instead. That’s a bummer because, as I said, the inserts look good. I don’t think I will be tracking down another box of this because of the smaller 150 card base set. Boxes are selling anywhere from $35-60 shipped on eBay lately. I may just have to hunt some down some of the inserts instead.