1995 Zenith was Pinnacle’s first super premium card set, with base cards printed on thick card stock. The card fronts featured a gold pyramid (pinnacle, zenith, pyramid…see the theme here?) design overlayed by the player photo. The base set features 150 total cards — 110 base cards and a 40-card “Rookie”: subset. The Rookie subset has many big names like Alex Rodriguez, Derek Jeter and Chipper Jones but most are not actual Rookie Cards. With packs priced at $5 each back in 1995, these were definitely not cheap. 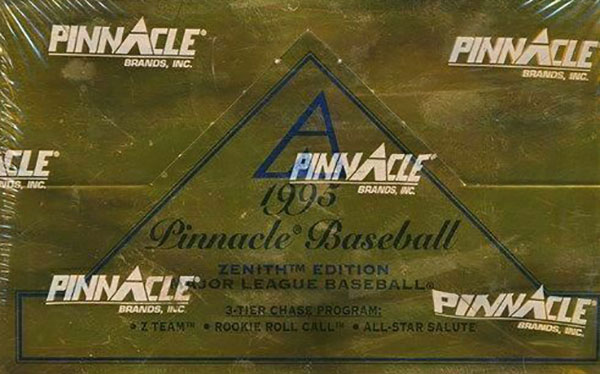 Today actually marks a milestone for the Cheap Wax Wednesday series. Five years ago, to the day, on April 22, 2015 I posted the first “episode” of Cheap Wax Wednesday on my blog, featuring 1994 Flair Series 2 Baseball. This post marks the 262nd straight week with a different featured product. I will be celebrating this milestone with a giveaway through my Twitter. I will be giving away a box of this week’s featured product. Be sure to check for that! 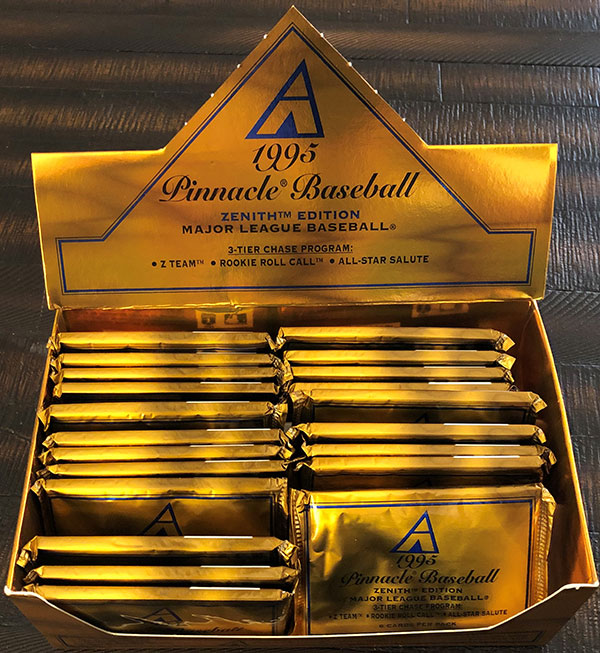 Pack 1 fun fact: Edgar Martinez was signed by the Seattle Mariners in 1982 after a tryout in Puerto Rico. He was playing semi-pro ball at the time and agreed to a $4,000 bonus. 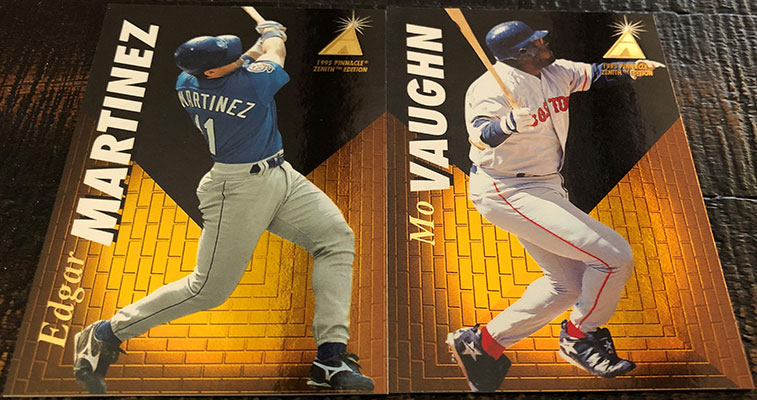 Pack 2 fun fact: Matt Williams led the majors with 43 home runs in 1994. There were 47 games left on the San Francisco Giants schedule when the season ended abruptly due to the player’s strike. Would he have made a run at 61?

Pack 3 fun fact: Among his many accolades, Ivan Rodriguez is the all-time leader with 2,427 games played as a catcher. The previous mark was held by Carlton Fisk (2,226).

Pac 4 fun fact: Dave Winfield was 43-years old in 1995 when he suited up for the Cleveland Indians in his 22nd and final MLB season.

Jose Canseco, Hideo Nomo RC (one of the few from the subset that are Rookie Cards) & Jeff Conine All-Star Salute (1:6 packs)

Pack 5 fun fact: While Hideo Nomo is best known for his time with the Los Angeles Dodgers, he also led the AL with 220 strikeouts as a member of the Boston Red Sox in 2001. 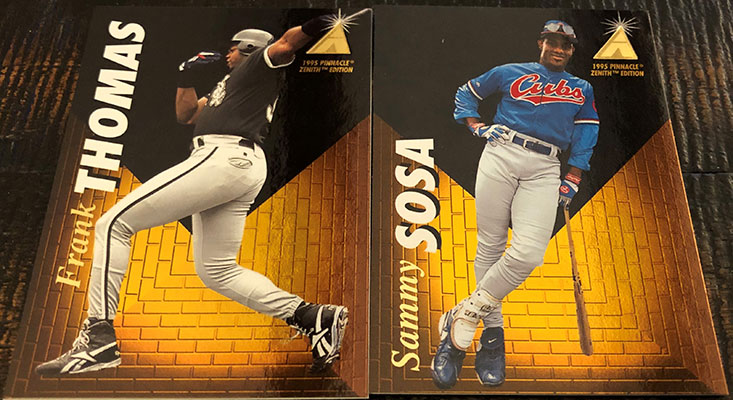 Mike Mussina & Hideo Nomo. While the Nomo card features a very different card design, this is only a base card.

Pack 8 fun fact: Mike Mussina won 20 games just once over the course of his 18-year Hall of Fame career. It was in his final season, when he went 20-9 at the age of 39 for the Yankees. 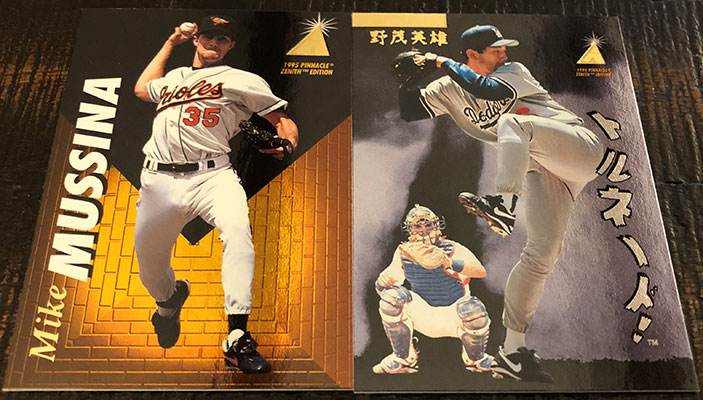 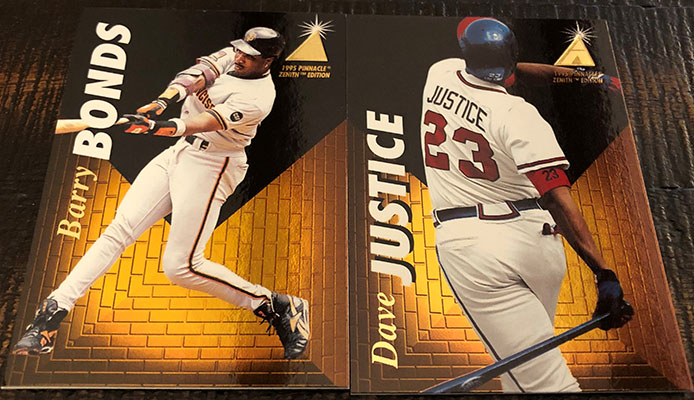 Pack 10 fun fact: Mark McGwire had 1,626 hits in his career and 35.9 percent of them were home runs. To put that into perspective, home runs only account for 26.0 percent of all-time home run leader Barry Bonds’ career hit total. 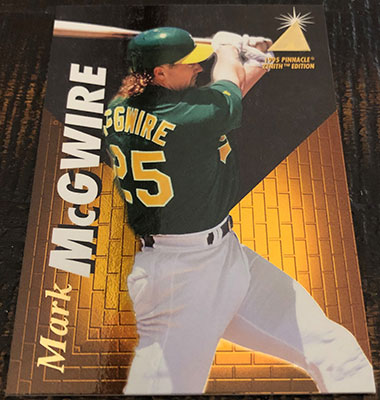 Pack 11 fun fact: The Yankees acquired Paul O’Neill from the Cincinnati Reds in exchange for Roberto Kelly prior to the 1993 season in one of the better trades in franchise history. 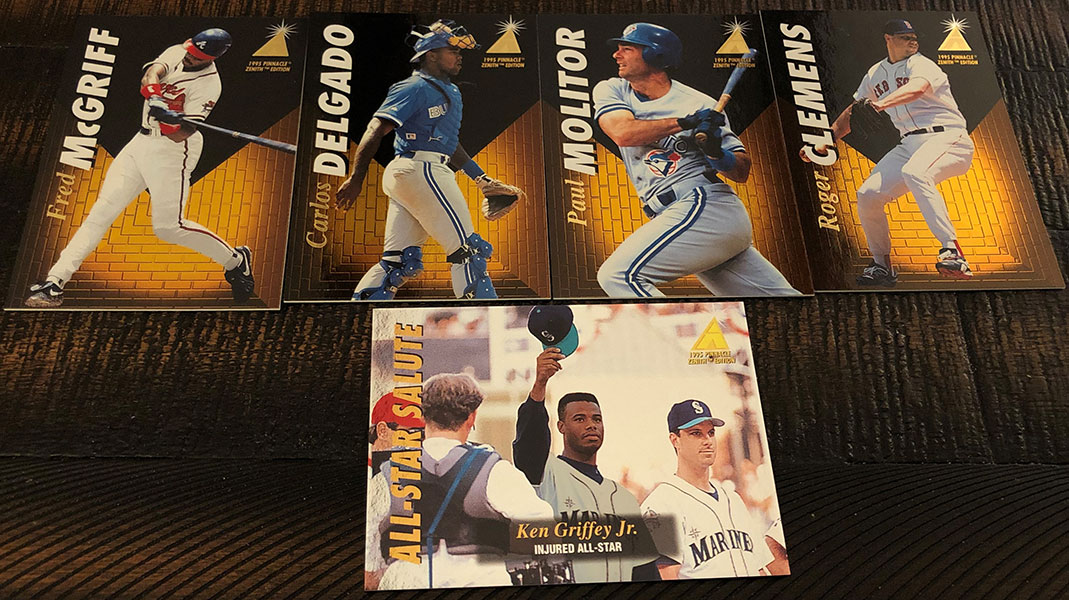 Pack 14 fun fact: There were 492 players drafted ahead of Don Mattingly in 1979 before the Yankees finally scooped him up in the 19th round. 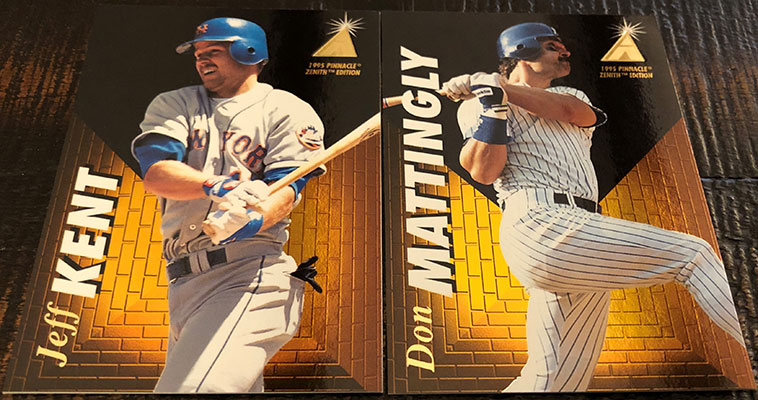 The Rookie Roll Call card backs look almost as good as the fronts. 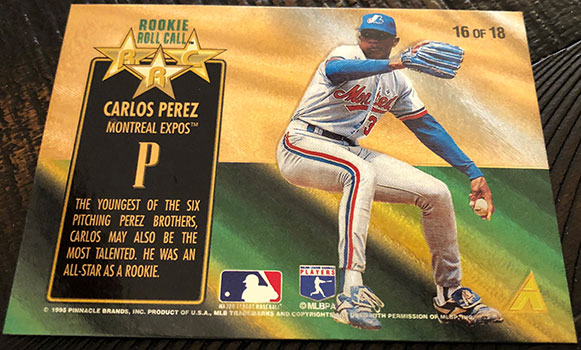 Pack 16 fun fact: Kenny Lofton actually attended the University of Arizona on a basketball scholarship and he started 33 games for a Wildcats team that went 29-4 during the 1988-89 season. That team featured five future NBA players, including Sean Elliott.

Pack 18 fun fact: The John Olerud Award is given out annually to the best two-way player in college baseball. During his junior year at Washington State, Olerud went 15-0 on the mound and hit 23 home runs. 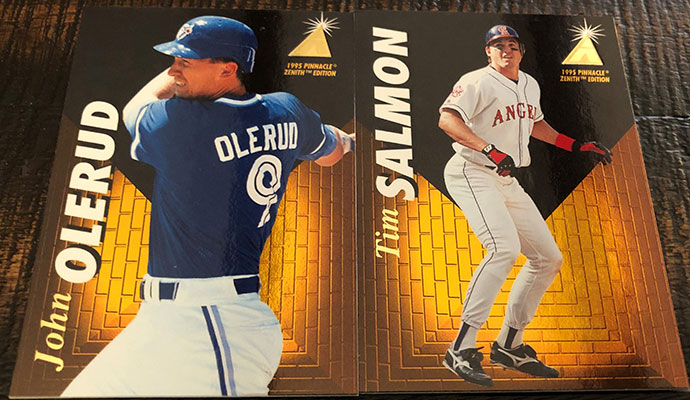 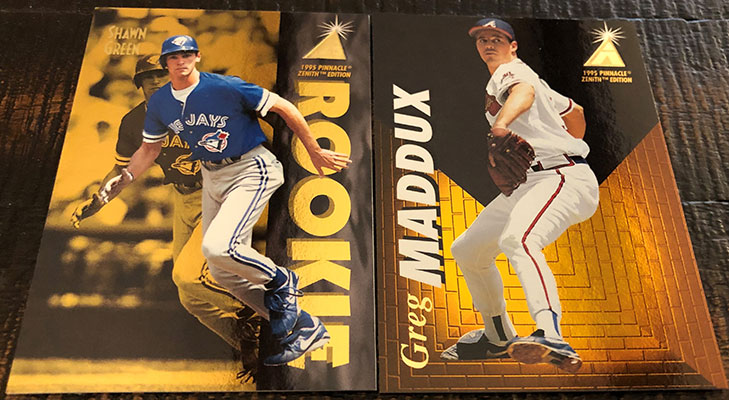 Pack 20 fun fact: Jim Thome won the only Silver Slugger Award of his career in 1996…as a third baseman. 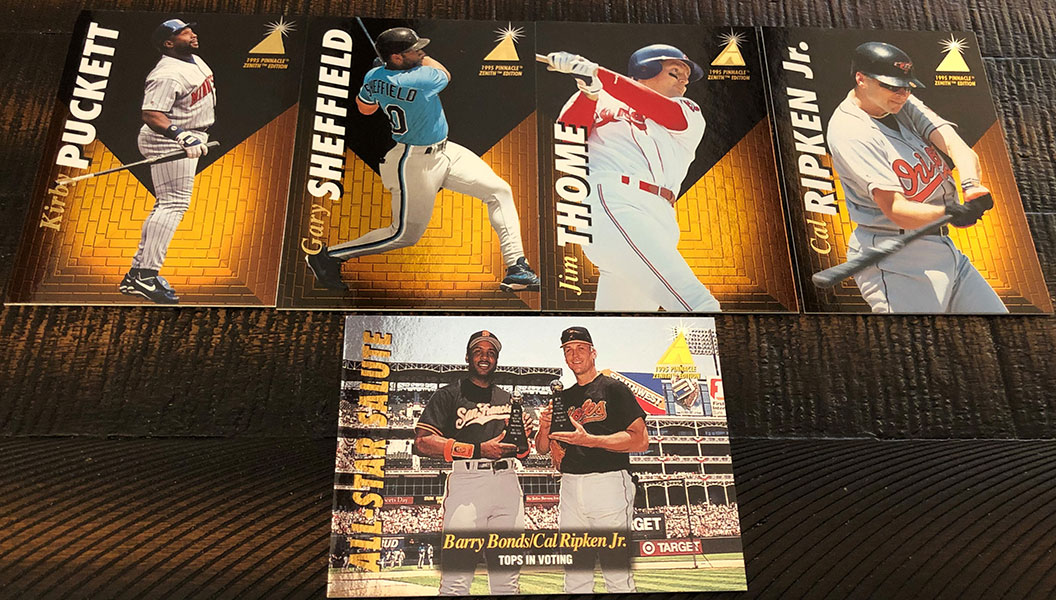 Pack 21 fun fact: Wade Boggs won five batting titles during his first six full seasons in the majors. His .328 career average is good for 33rd on the all-time list.

Pack 23 fun fact: Roberto Alomar made 12 straight All-Star Game appearances from 1990 to 2001, playing for four different teams along the way.

Craig Biggio, Joe Carter & Frank Thomas All-Star Salute (1:6 packs). I find the Carter card to be a bit odd. While every other base card in the set features the pyramid design prominently, the photo on this card leaves the design barely visible along the right edge.

Pack 24 fun fact: The Blue Jays acquired Joe Carter and Roberto Alomar from the Padres prior to the 1991 season in exchange for Fred McGriff and Tony Fernandez. That trade paved the way for back-to-back World Series titles in 1992 and 1993.

Lastly, the Biggio card back. Pinnacle tried something different here, going with a hit location chart on the card backs. I don’t know about you, but I prefer seeing more stats. Give me all the stats! 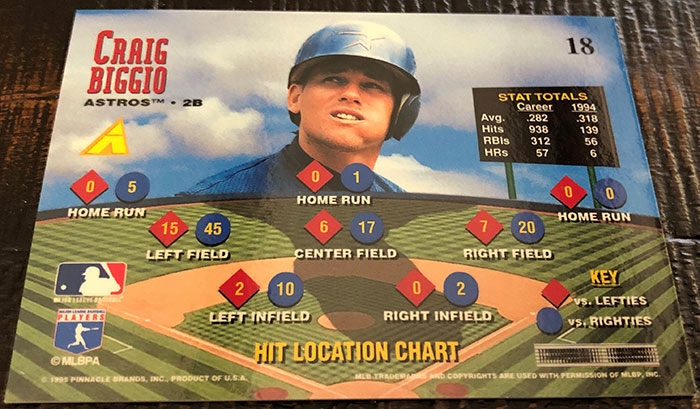 I fared well with this box. I pulled all of the big names from the Rookie subset, including the biggest — Derek Jeter. I could have done a lot better with the Rookie Roll Call card, but the 18-card checklist for that insert set doesn’t feature a ton of big names. A-Rod, Jeter, Chipper and Nomo would be the highlights from that list. The only insert I did miss out on pulling was a Z-Team insert, which are found just once in every three boxes (1:72 packs). 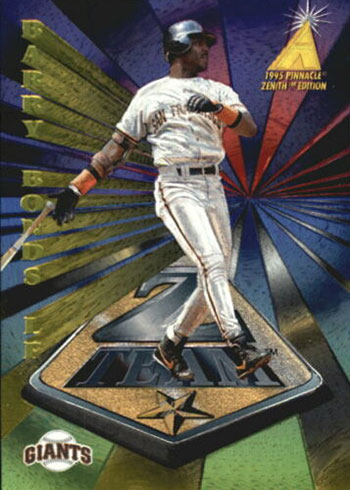 Another fun product, and I certainly can’t complain about the price! It has been a fun five-year Cheap Wax Wednesday run. I look forward to the next five years!