1995 Upper Deck Series 2 had a lot to offer, even after opening the box. The base set features Rookie Cards of 1995’s hottest rookie, Hideo Nomo. 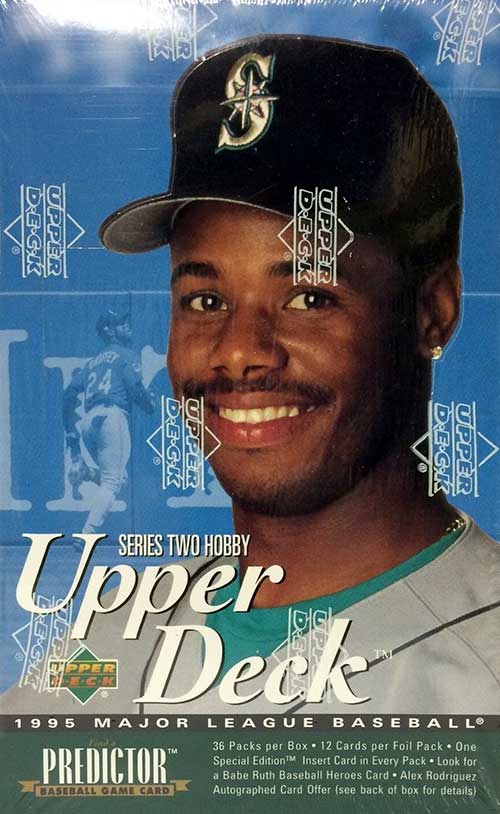 Upper Deck also featured an award winner Predictor set (very similar to something Topps unveiled this past season with the online-exclusive Topps Now Future Pack: 2019 Award Winners) and if your player won the stated award, you could redeem your card for a full Predictors set. Series 2 also has Trade cards good for a nine-card “update” set featuring players on their new teams. There were five Trade cards and 45 update cards in all.

If that wasn’t enough for post-break involvement, Upper Deck also had a wrapper redemption in 1995. By sending in just 35 hobby wrappers (basically one box worth) and $5 shipping and handling you could receive a jumbo 8×10 autograph card. Series 1 wrappers would get you a Roger Clemens autograph, and Series 2 wrappers would net you an Alex Rodriguez jumbo autograph. Makes me wish I would’ve busted this box back in 1995.

Speaking of autographs, Series 2 also features an autograph set featuring just five players, with pretty reasonable odds. Redemption cards were found once in every two boxes, and each would be good for an on-card autograph of Reggie Jackson, Willie Mays, Frank Robinson, Roger Clemens, or Raul Mondesi. Not a bad list. 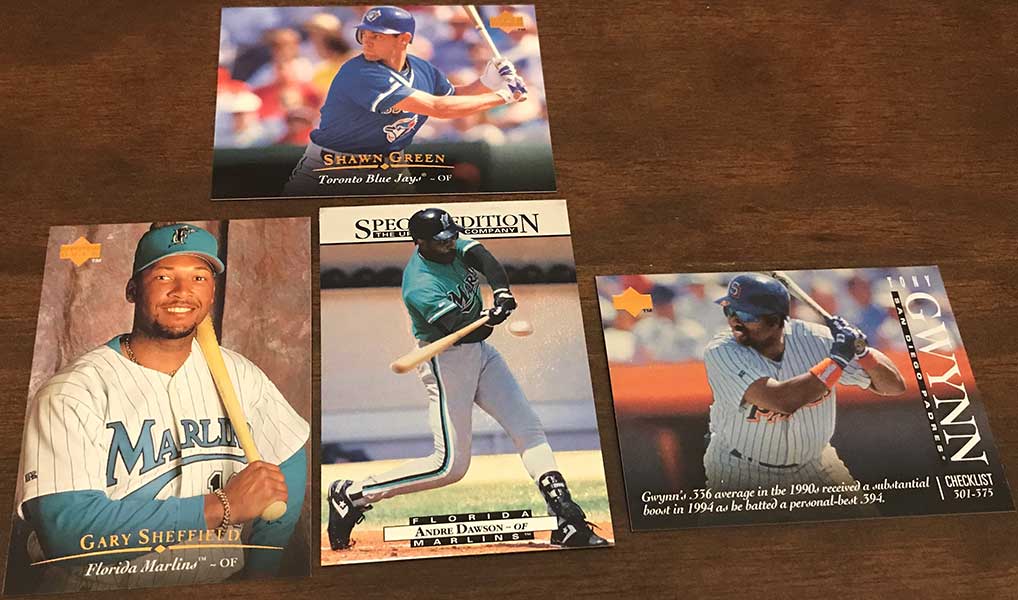 Edgar Martinez (I love cards showing players in positions you wouldn’t think of them playing. Even though Edgar did play some third base early in his career, from 1995 until the end of his career he appeared in just seven games at third.), Larry Walker and Geronimo Berroa SE 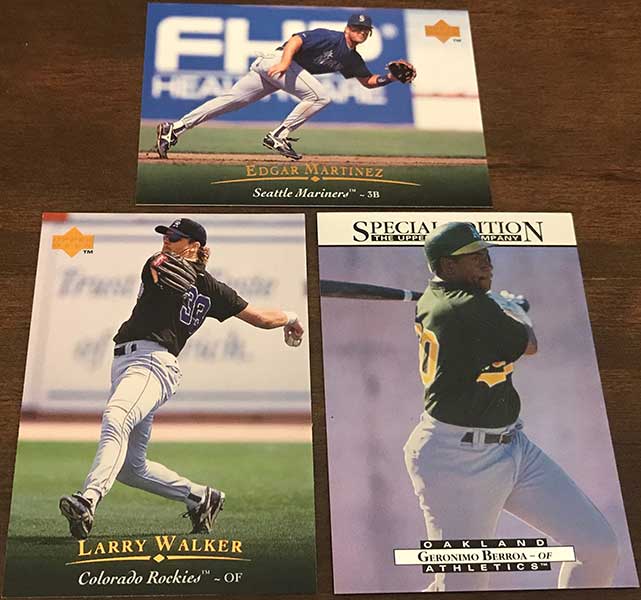 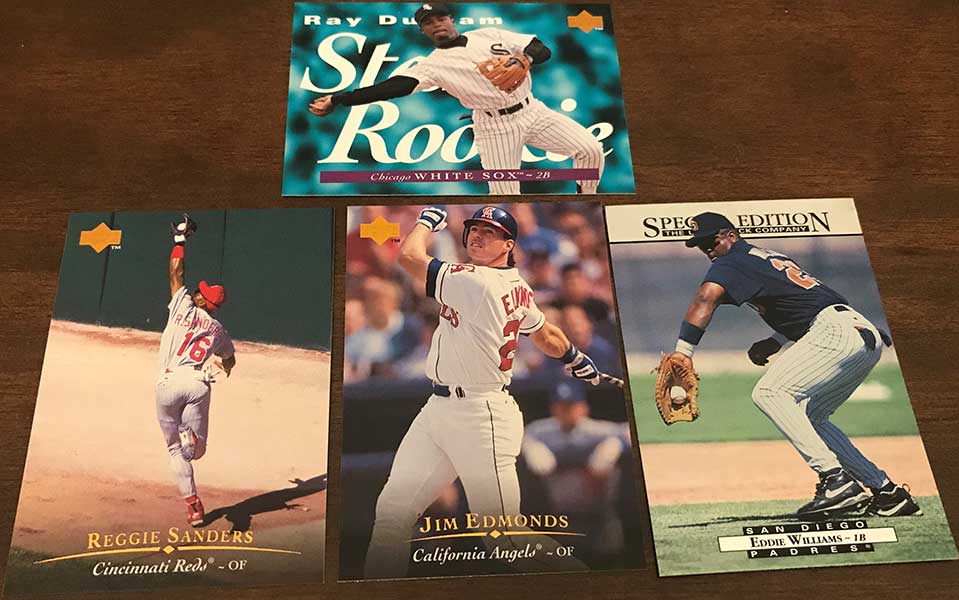 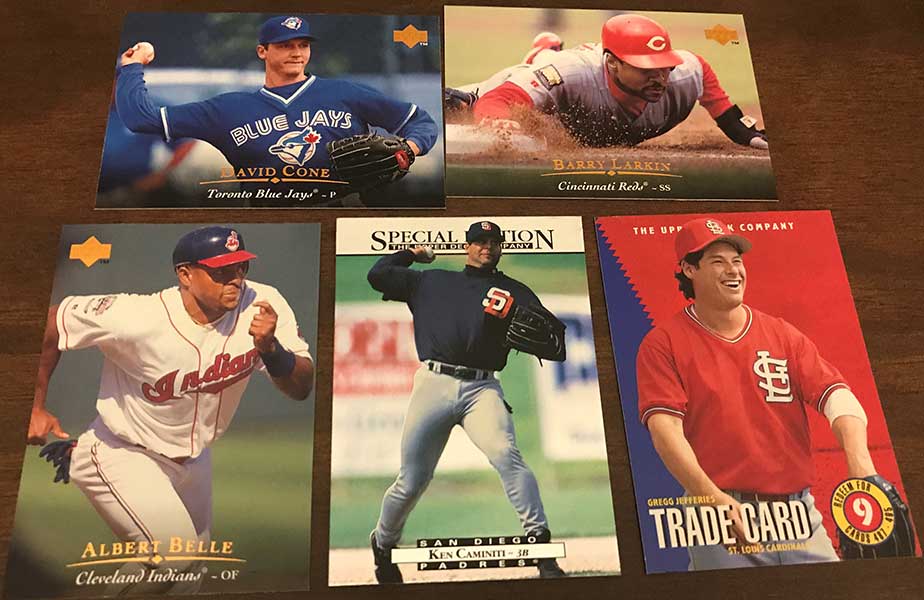 Now, Upper Deck says you could trade this card for nine new cards of the “hottest players on their new teams.” The new teams part was 100 percent accurate. The hottest players part, not so much. This Jefferies card could’ve been traded in for Darren Lewis, Dave Burba, Ron Gant, Bret Saberhagen, Vinny Castilla, Frank Rodriguez, Andy Pettitte, Ruben Sierra and David Cone. Some decent names in there. That return was probably the best of the five trade cards available. 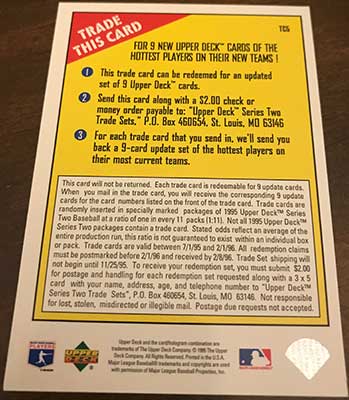 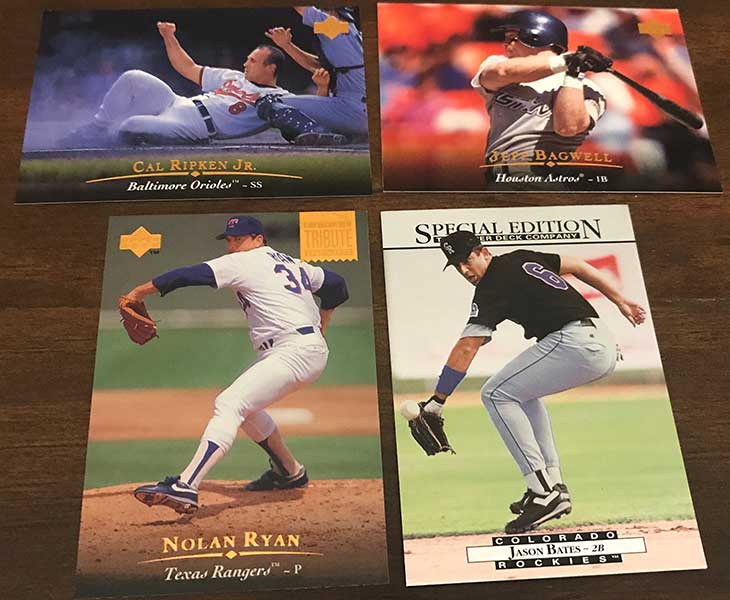 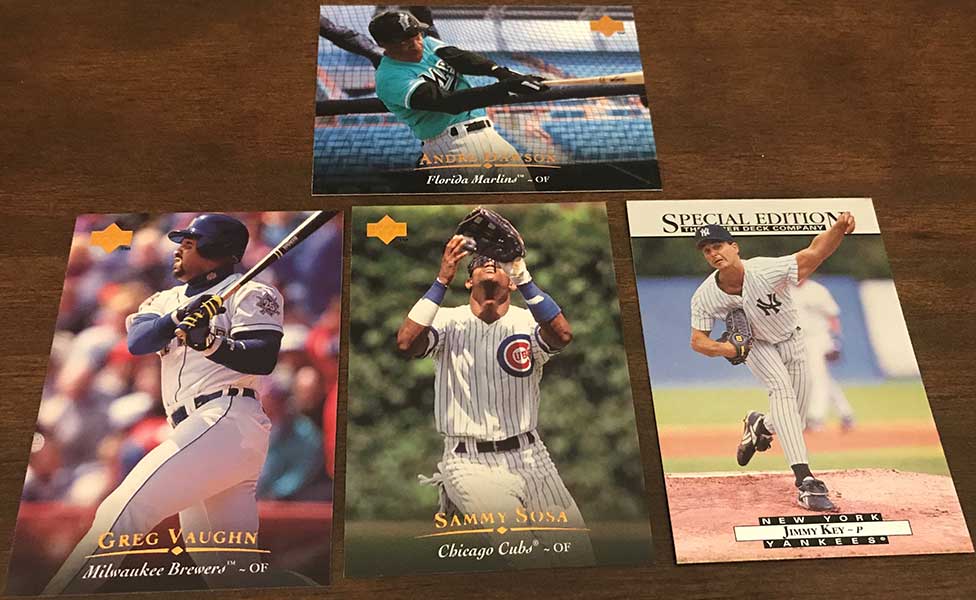 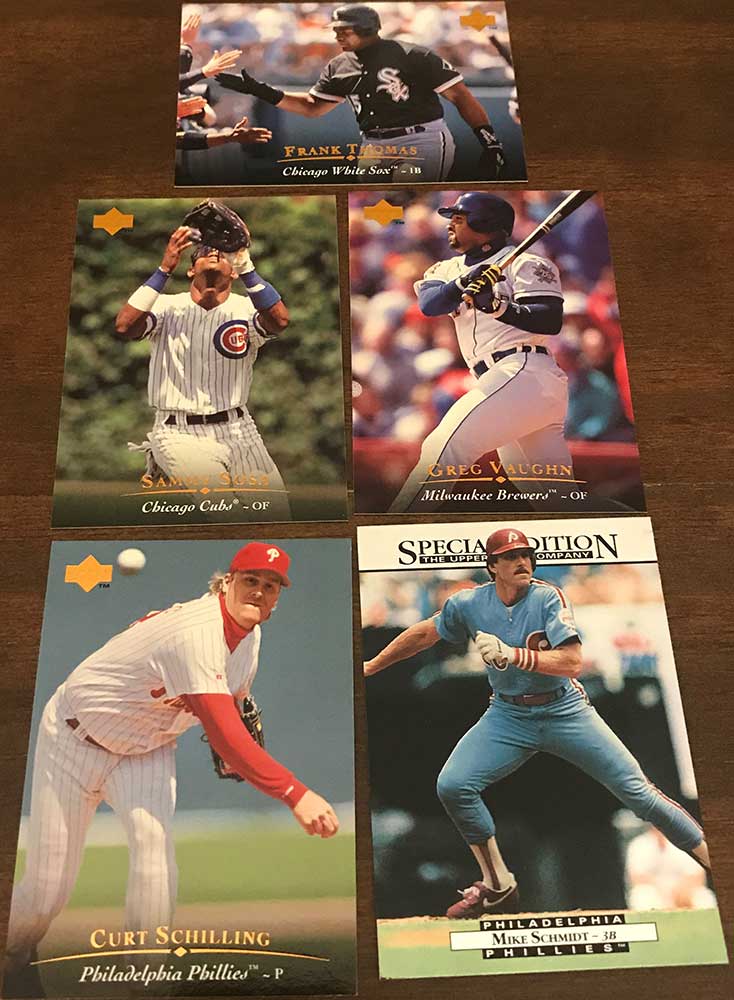 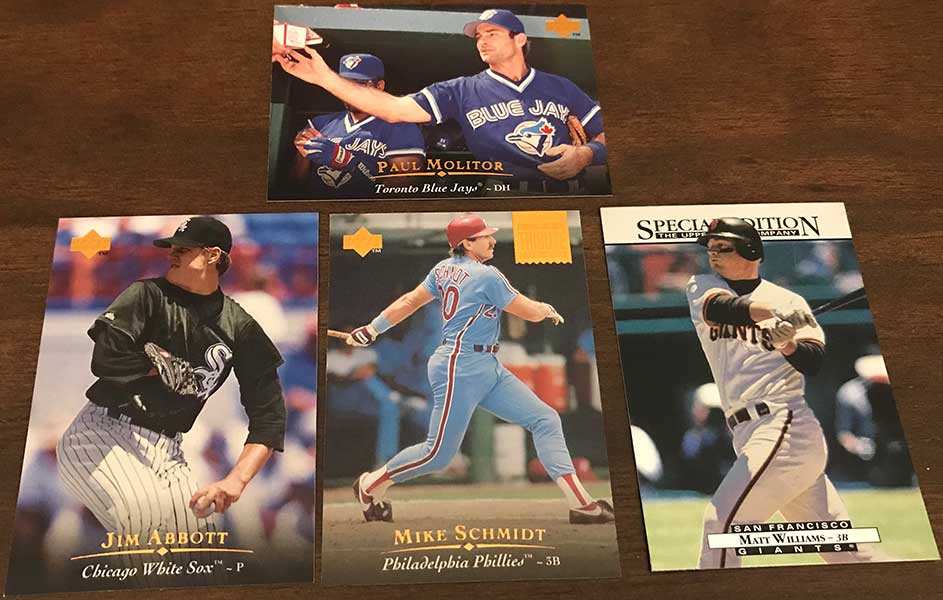 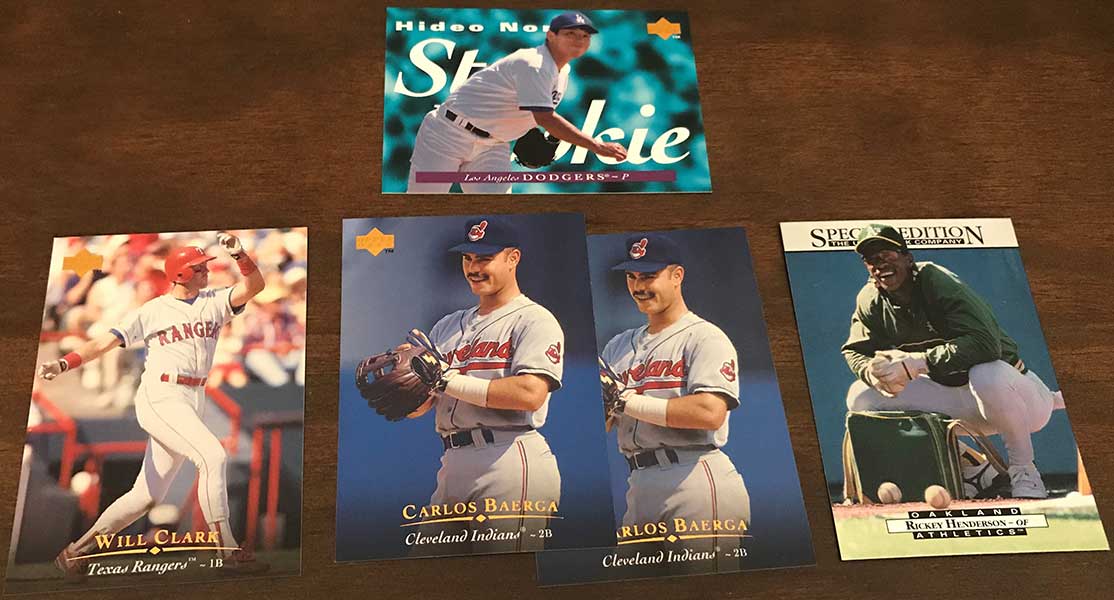 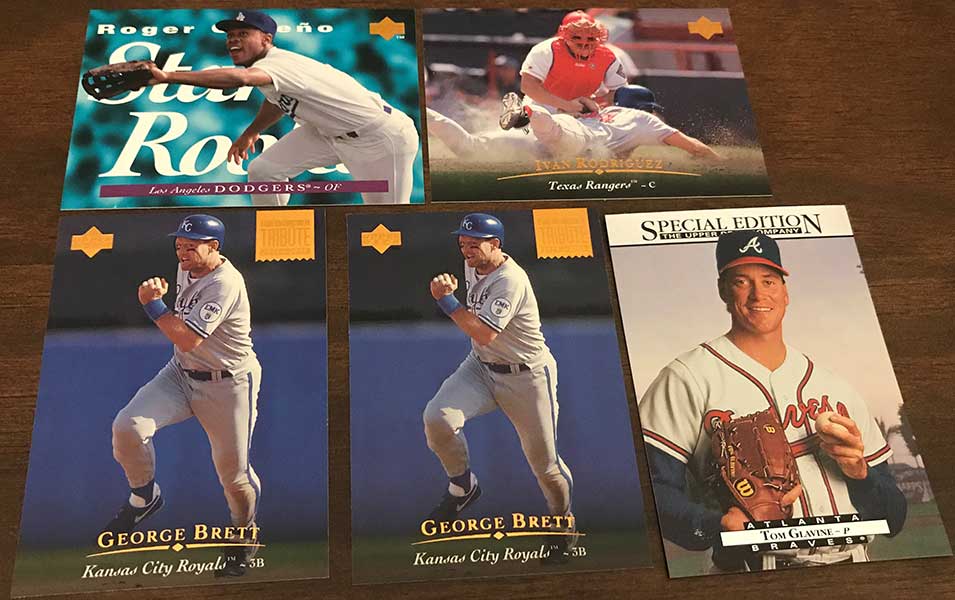 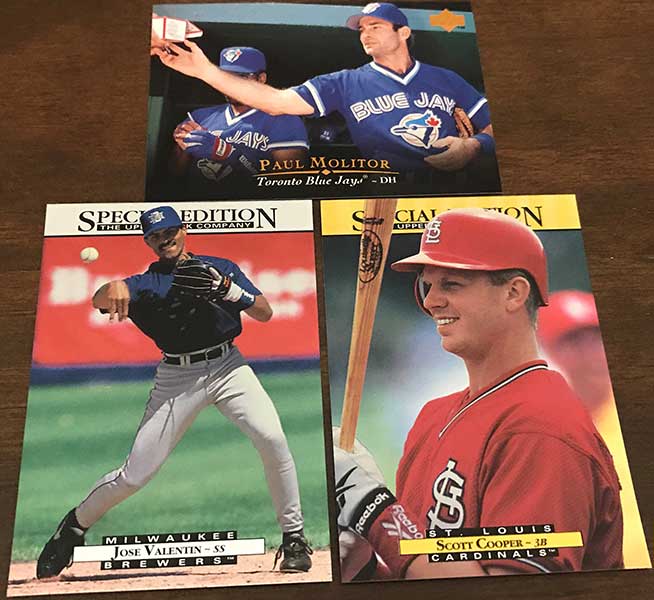 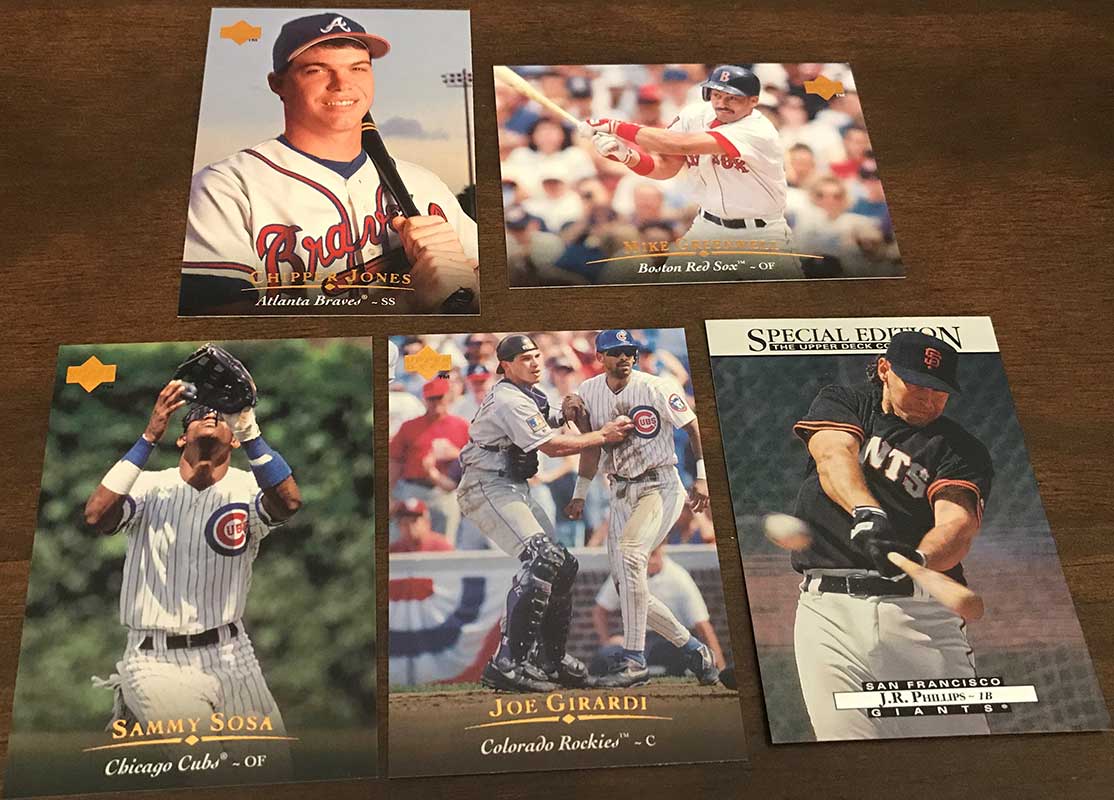 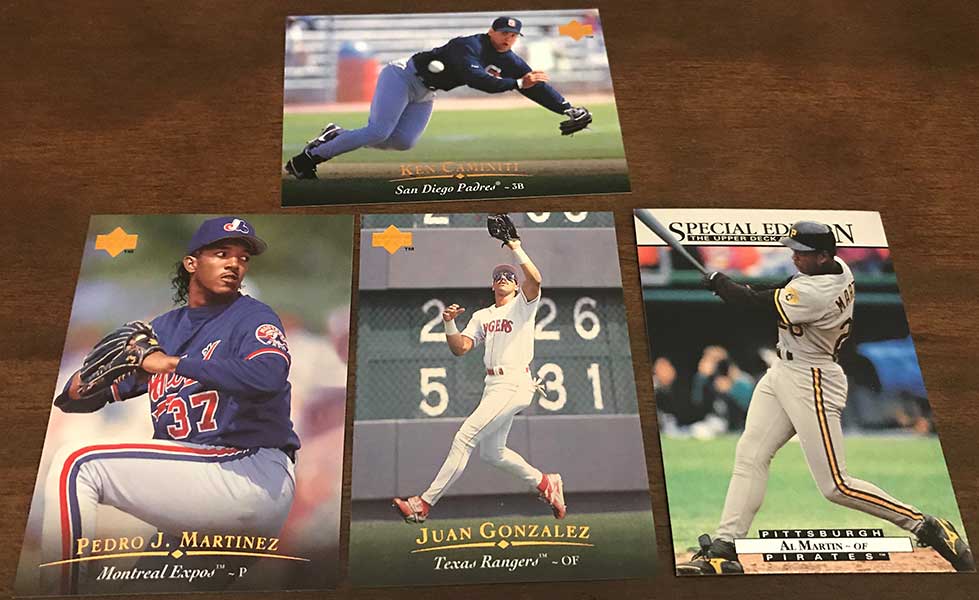 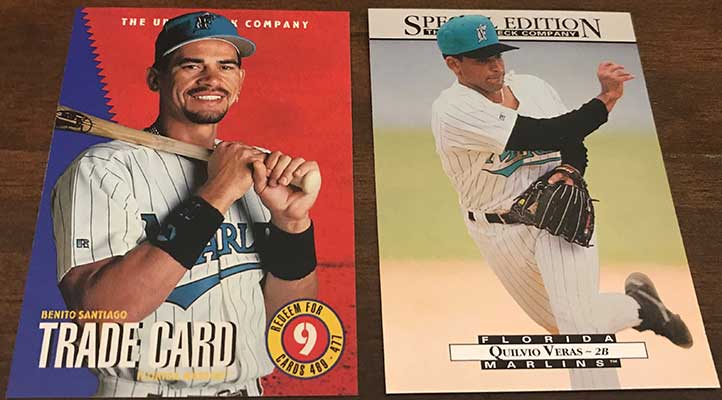 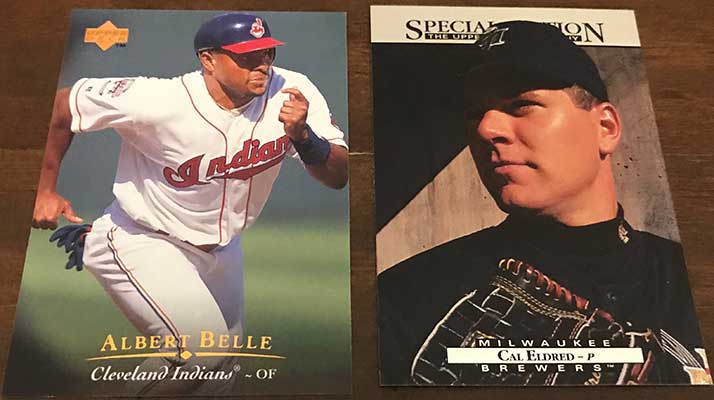 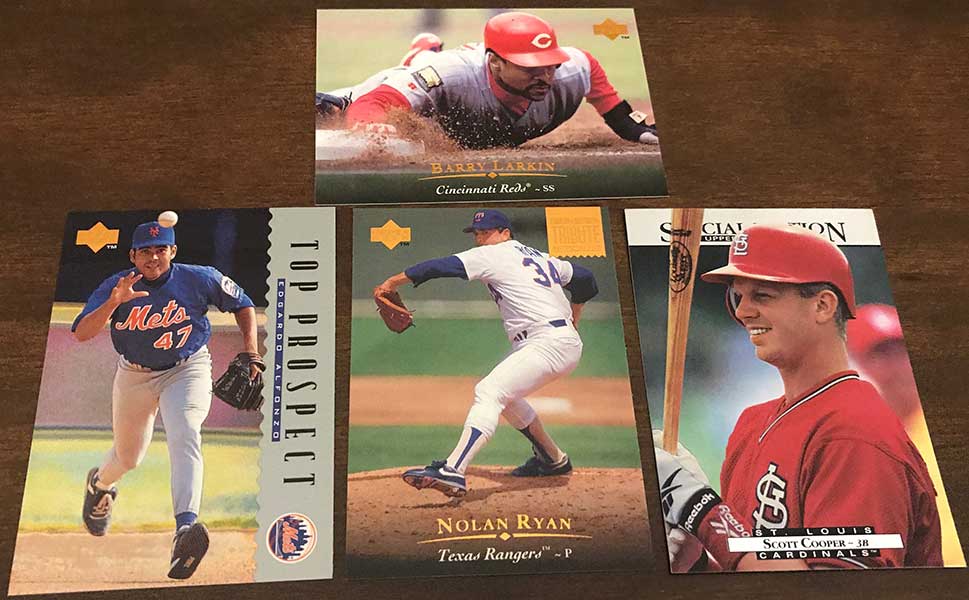 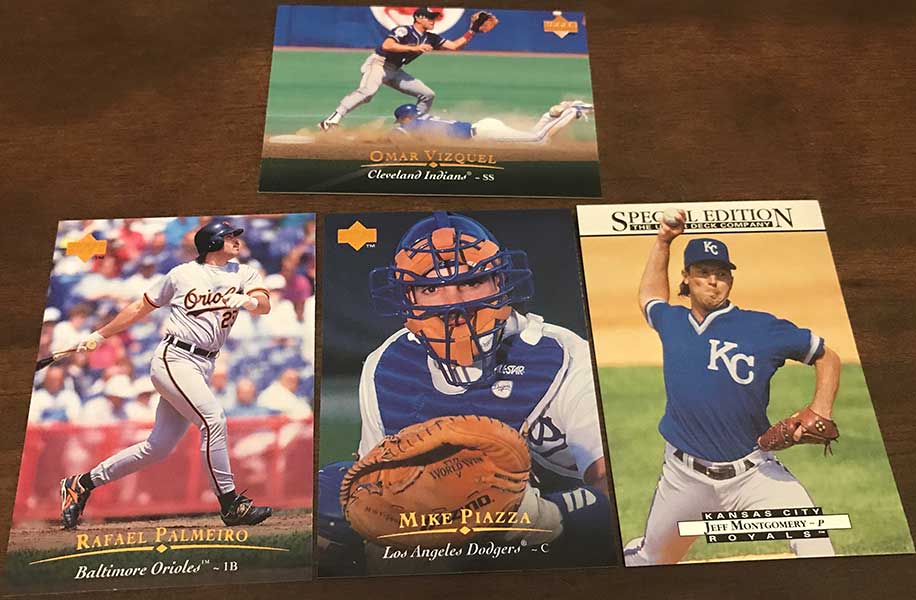 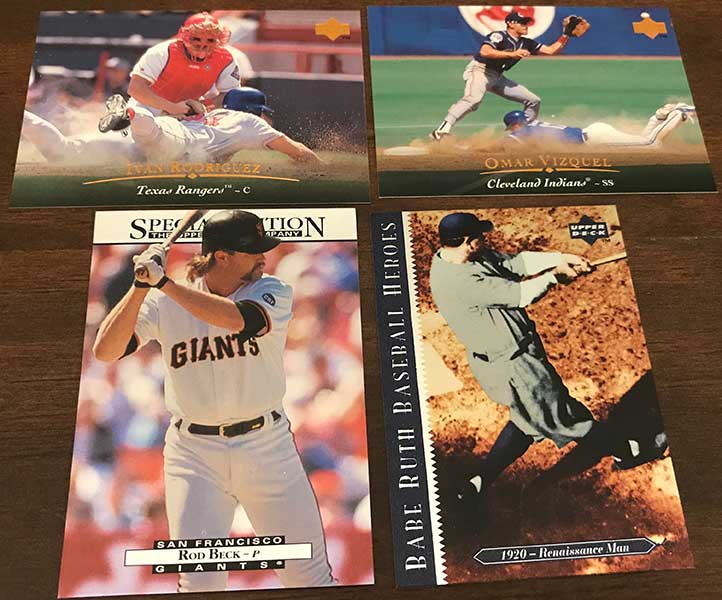 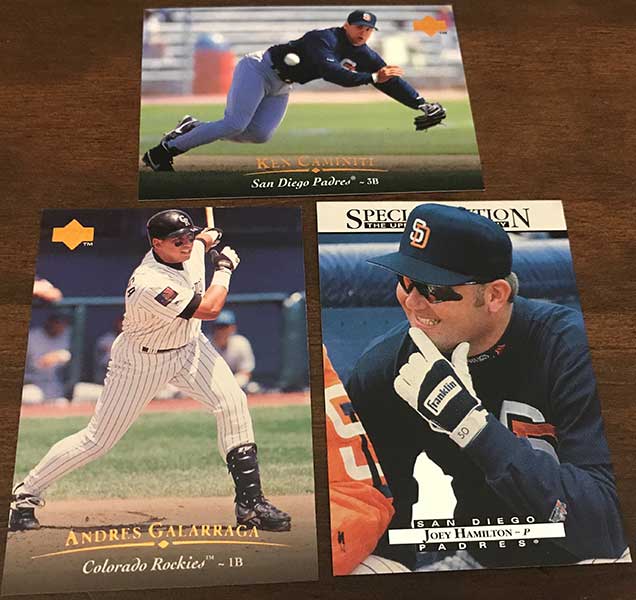 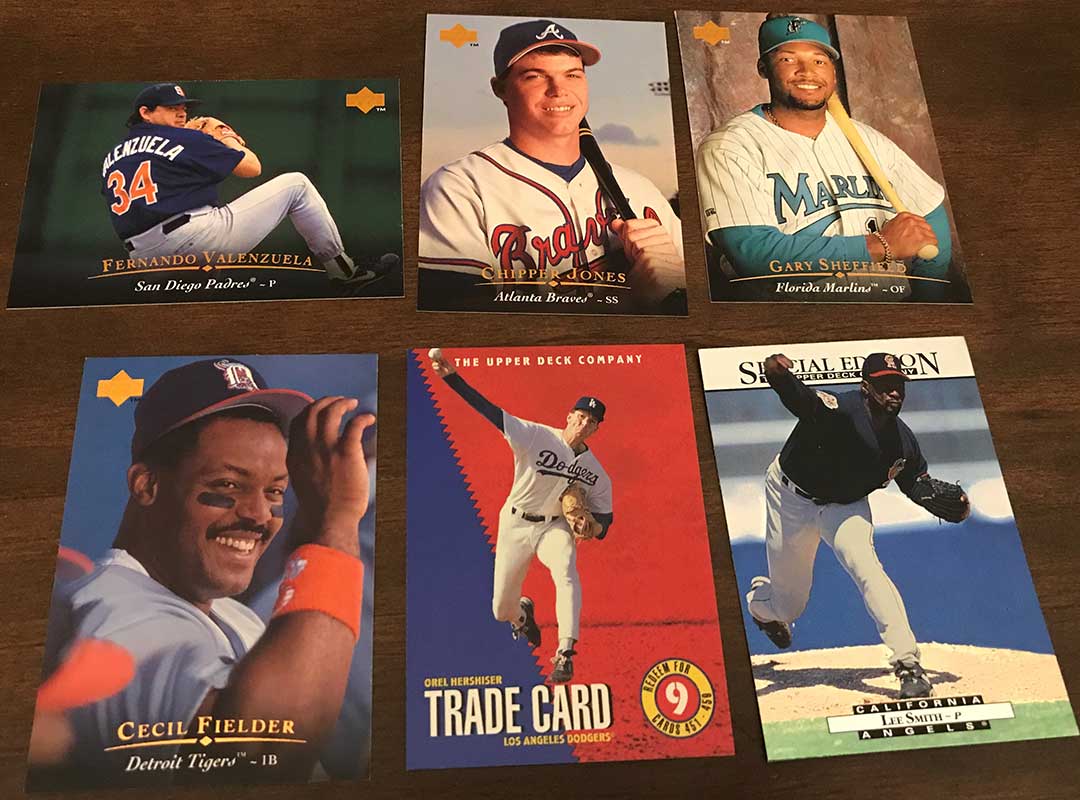 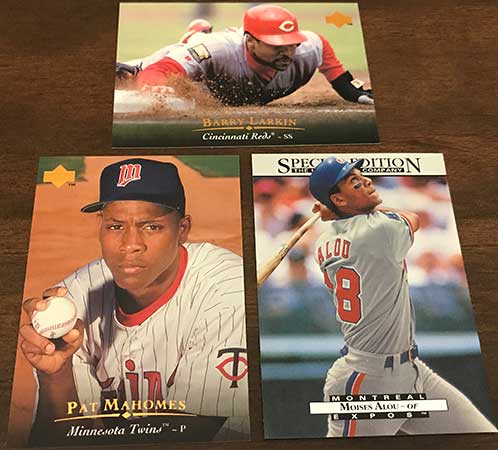 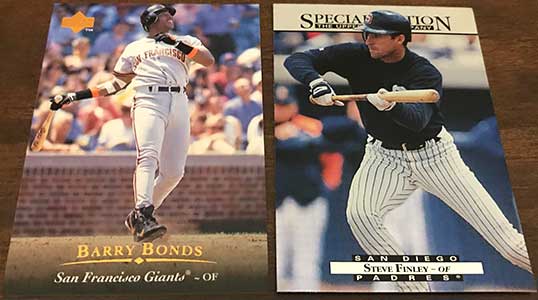 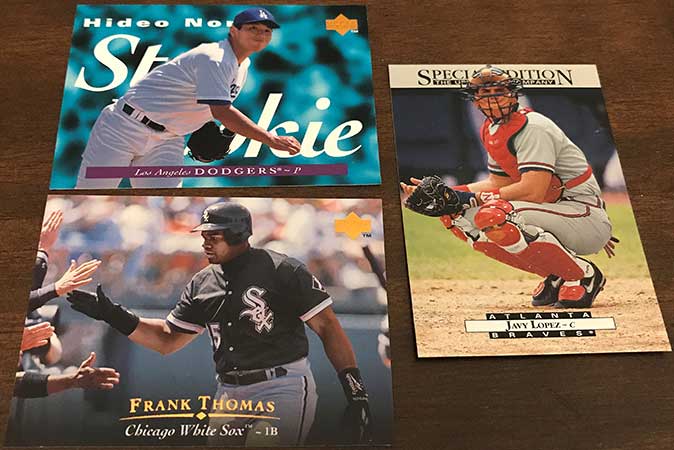 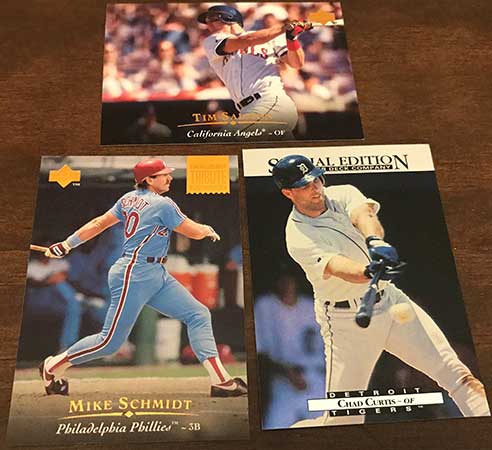 Lastly, the Big Hurt card back. And what a simple card back it is. Different picture (great choice, by the way) and Frank’s career stats — I like it. 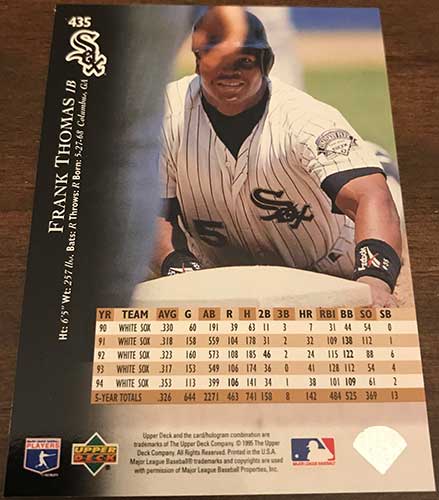 Unfortunately I didn’t pull an autograph. Considering they were all redemption cards, maybe that is for the best.

The base set design was very familiar for me. Back in 1995 I didn’t open any of this product, but did open some 1995-96 Upper Deck basketball. The two sets share the same exact design. I can still picture the Kevin Garnett Rookie Card in my head.

Not a bad break. I pulled a few of the Nomo Rookie Cards, which was probably a hot card when this product was released. The highlight of this box for me? Pulling two of the Babe Ruth Baseball Heroes inserts. At 1:34 pack odds, that is not easy to do. I am a sucker for the inclusion of legends into modern sets.

Shop for 1995 Upper Deck Baseball on: