Pinnacle debuted the Select brand for the 1993 MLB season. The product was actually released in December, 1992 alongside a TV commercial. When was the last time you saw a baseball card commercial? Select was meant to be a mid-tier product. At release packs were priced at $1.49 each. The debut product also prominently featured Dufex printing technology, which was used for all of the insert cards. 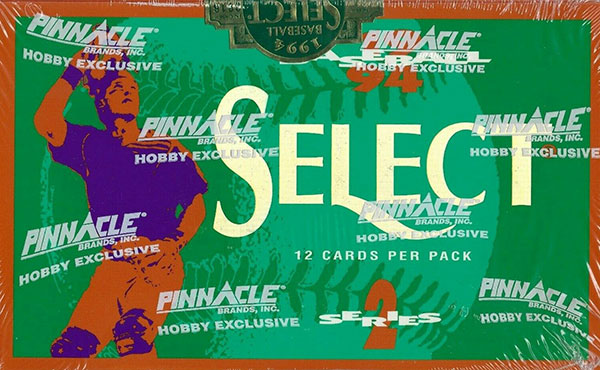 1994 Select Baseball is split into two series, each with 210 base cards. Base cards feature two separate player photos on the front, split by gold foil highlighting each player’s last name. Each box has a numbered seal that specified which box it was in the case, and which numbered case it came from. Overall 118,800 boxes of each series was produced.

Under Pinnacle, the Select brand was released from 1993-1998. After the sale to Panini, Select returned in 2013 before appearing again as a standalone product in Panini’s 2020 baseball lineup.

Pack 1 fun fact: Carlos Baerga and Craig Biggio were the Silver Slugger winners at second base during the 1994 season. 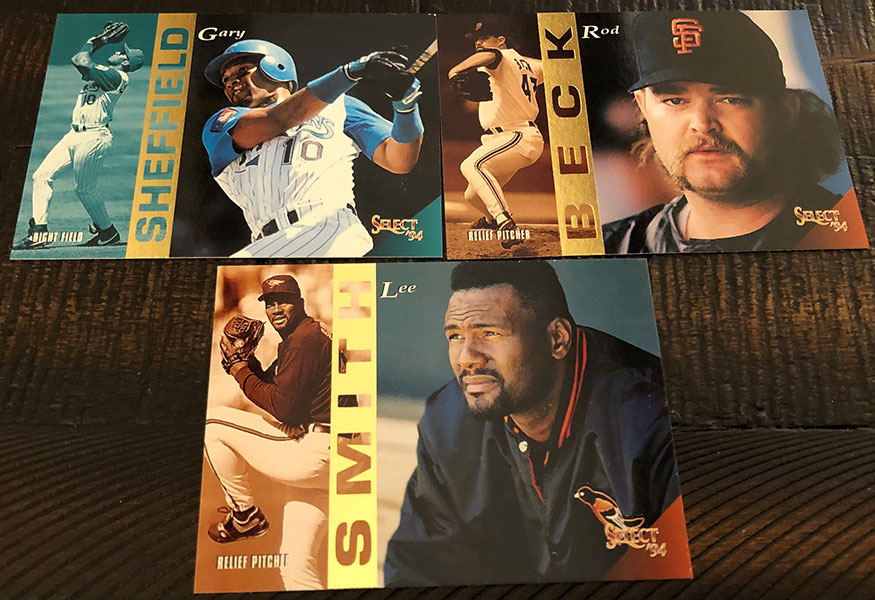 Pack 3 fun fact: The Braves traded Deion Sanders to the Reds on May 29, 1994, in exchange for fellow outfielder Roberto Kelly. “Primetime” stole 38 bases in 92 games during the ‘94 season. 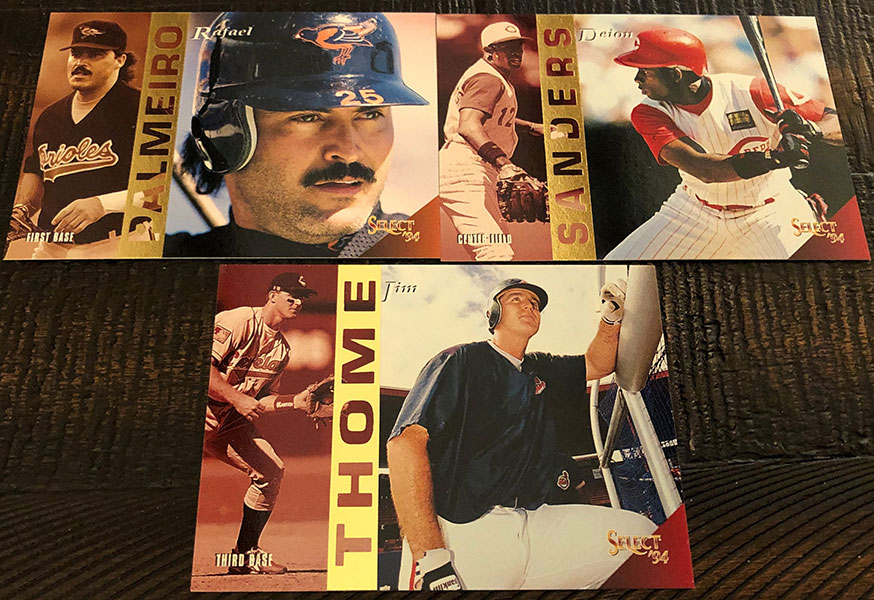 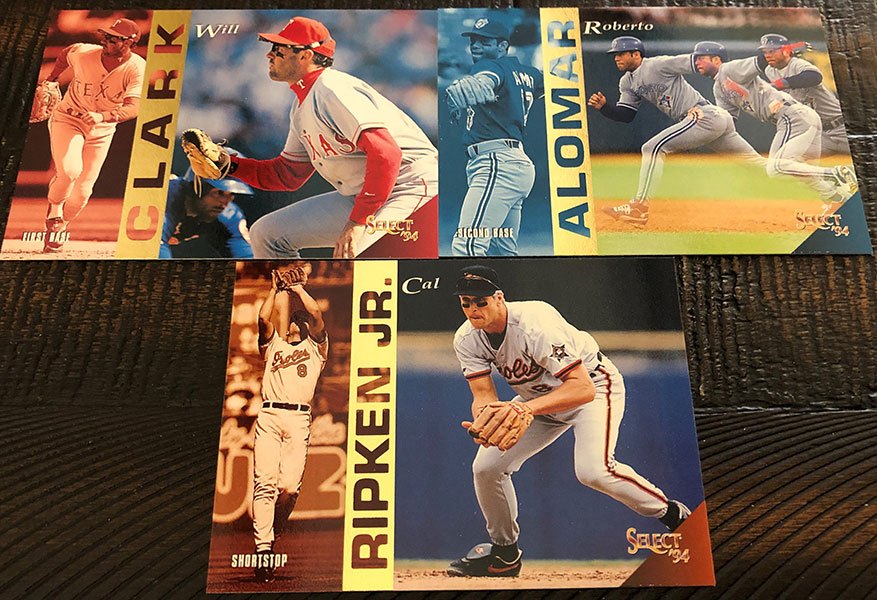 Pack 5 fun fact: Jack Morris played his final MLB season at the age of 39 in 1994. He recorded his 250th career win on June 19th, allowing five runs in seven innings against the Boston Red Sox. 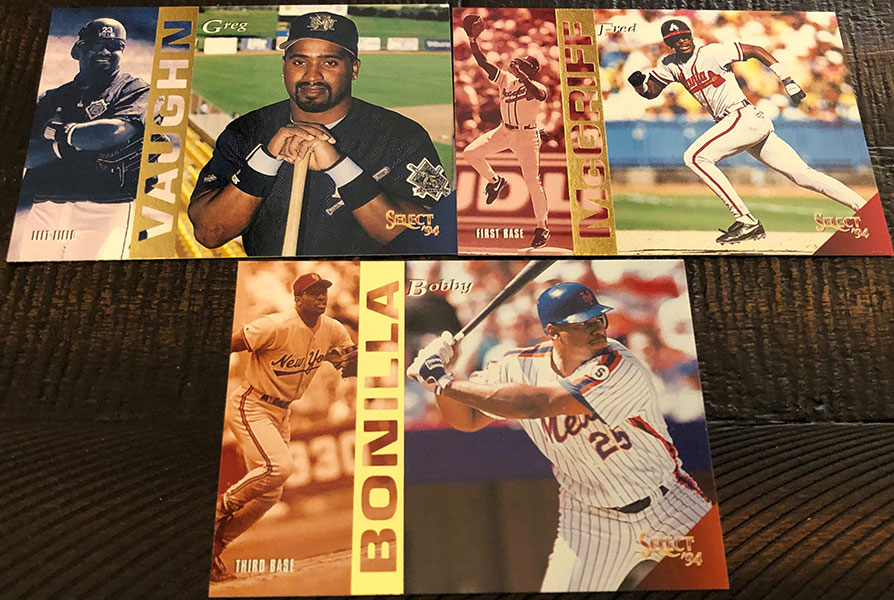 Pack 8 fun fact: If only these two had a memorable moment against one another to talk about… When the ‘94 season rolled around, Gibson was 37 years old and Eckersley was 39 years old. 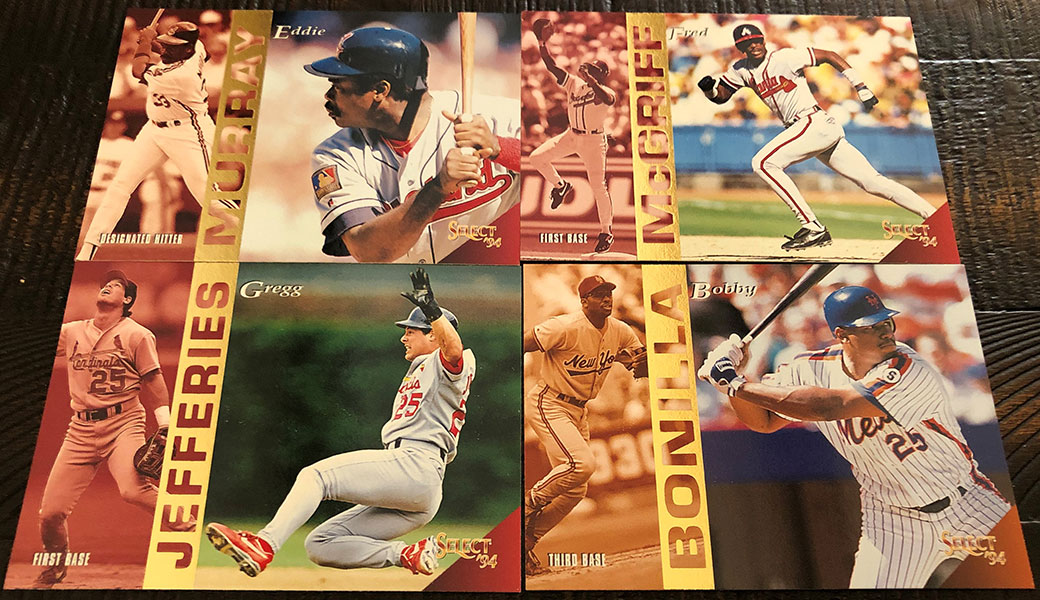 Pack 10 fun fact: Larry Walker had 154 career outfield assists and he was a seven-time Gold Glove winner. He was a worthy choice for “best outfield arm” at this point in his career. 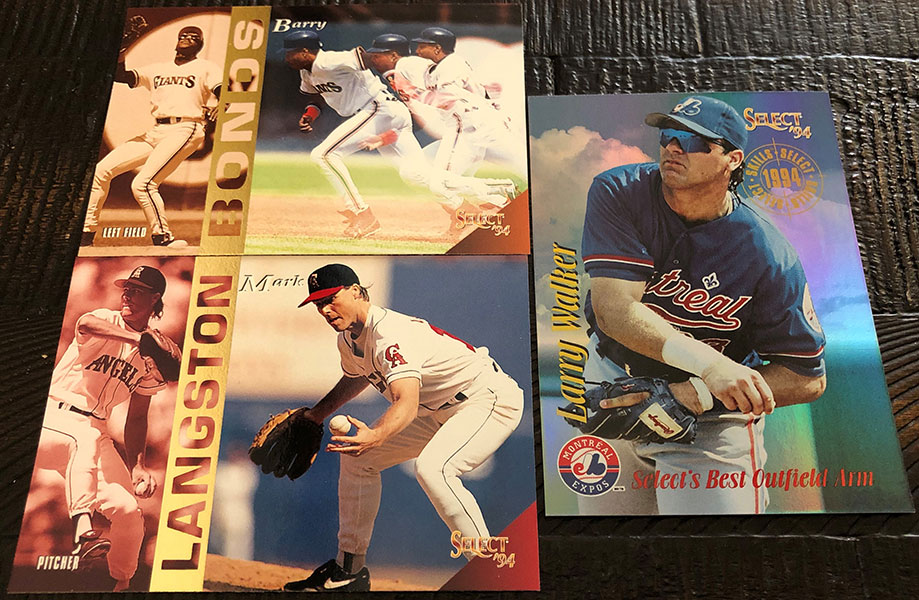 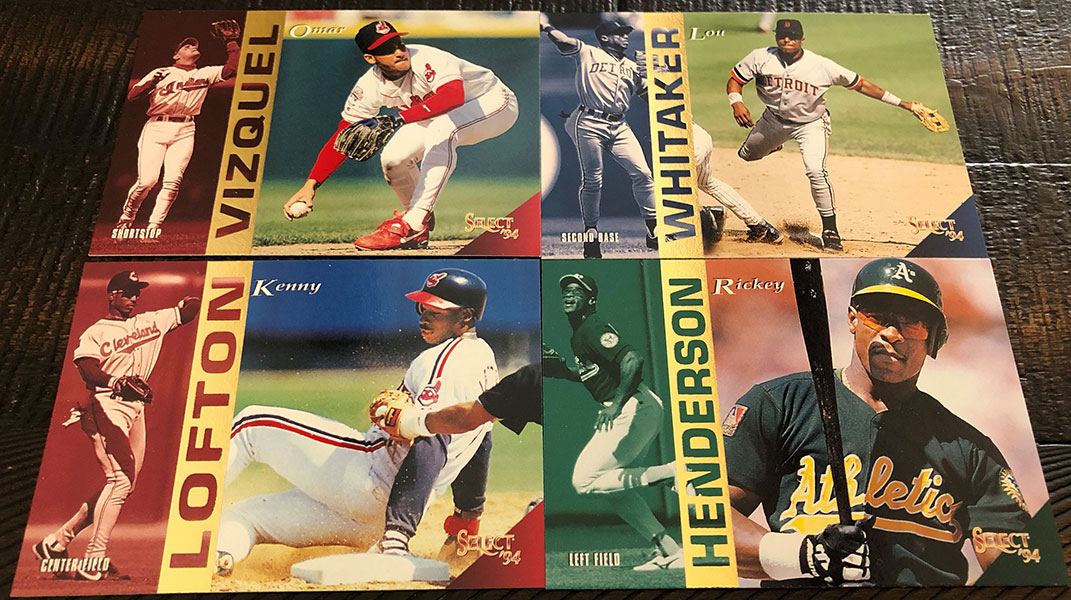 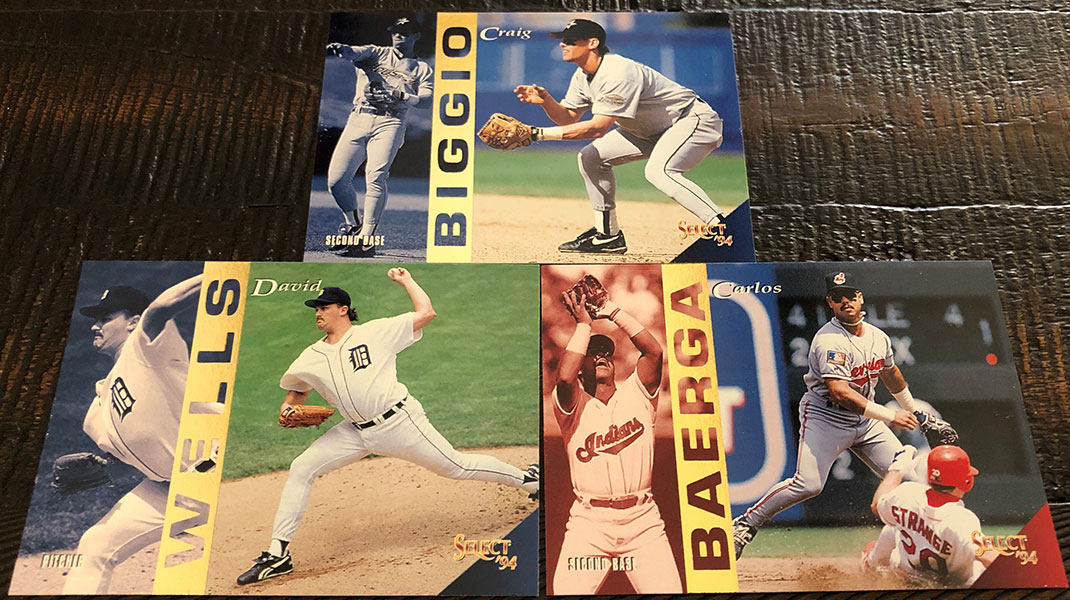 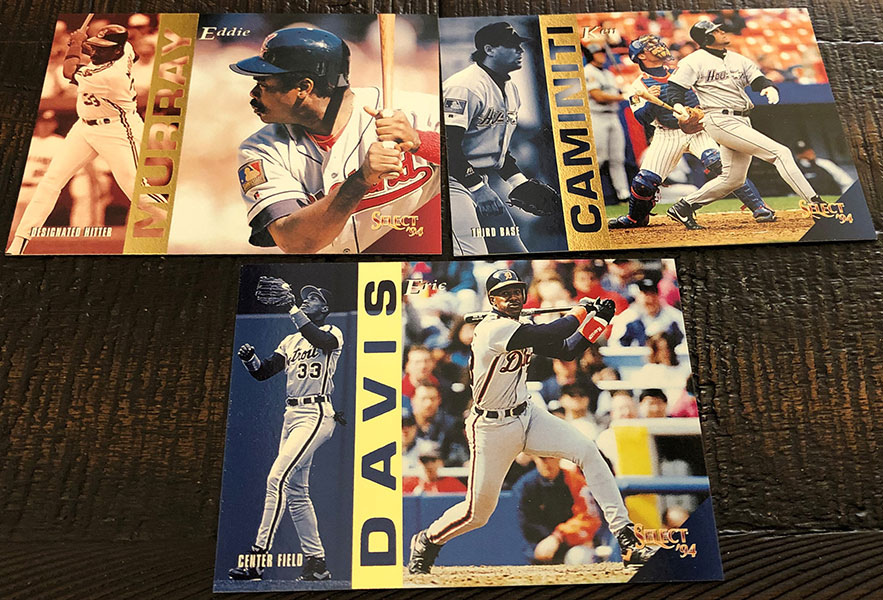 Pack 17 fun fact: Charles Johnson went 5-for-11 with a home run in a four-game audition in 1994, then finished seventh in NL Rookie of the Year voting in 1995 while winning a Gold Glove Award.

Lou Whitaker, Tom Glavine (I always love the cards featuring the pitchers with a bat in their hands), Matt Williams & Mark Grace

Pack 18 fun fact: Tom Glavine won four Silver Slugger Awards in his career, so he was a good pitcher to highlight in the batter’s box. 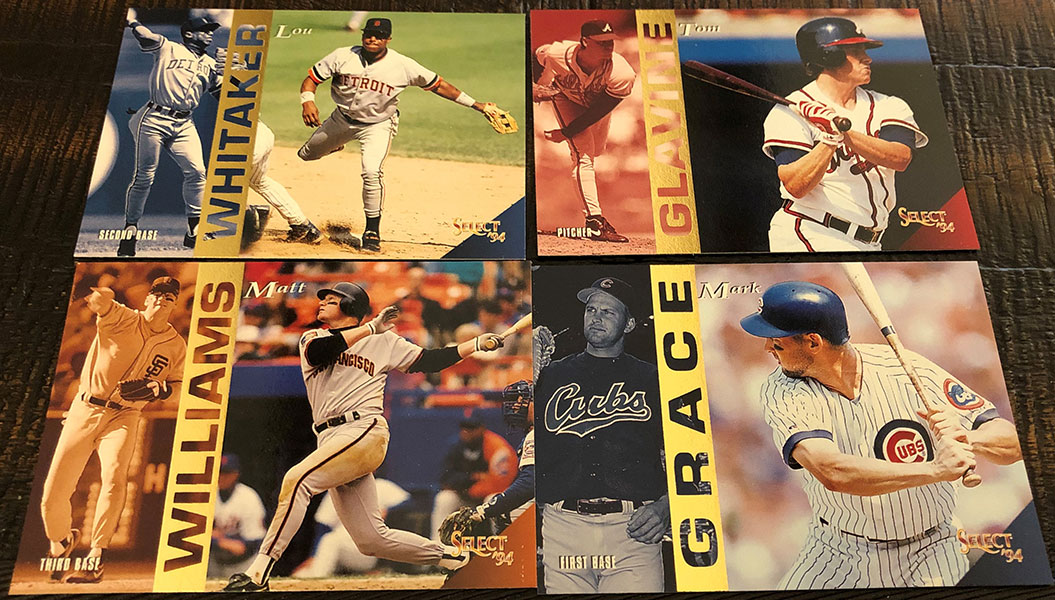 Pack 19 fun fact: Ken Caminiti was an All-Star for the first time in 1994. He was then traded from the Astros to the Padres in a 12-player blockbuster deal during the offseason. 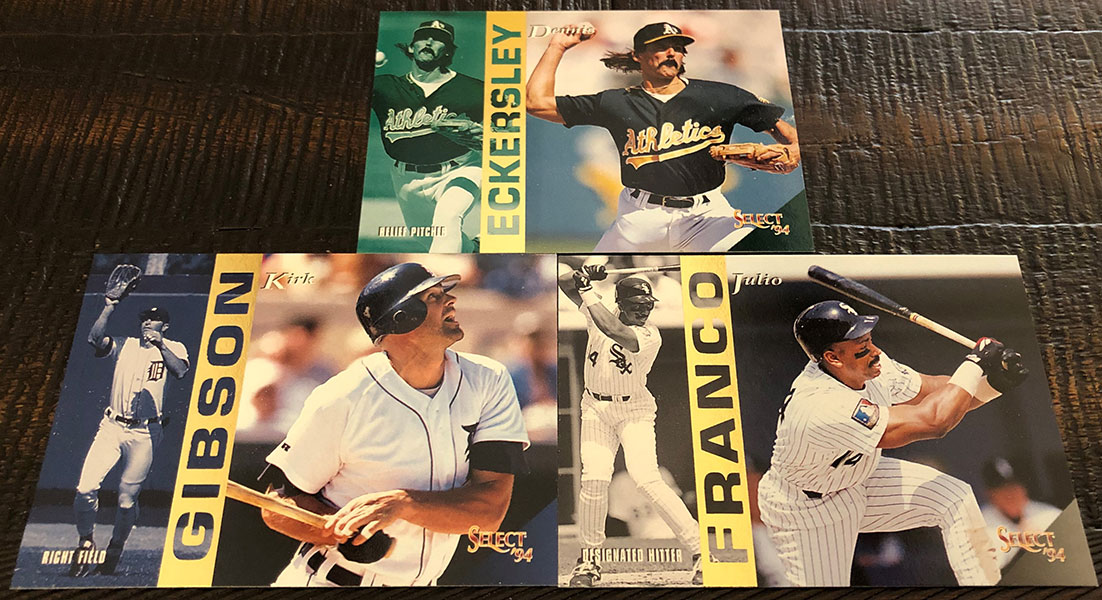 Pack 23 fun fact: The Mets traded Vince Coleman to the Royals in exchange for Kevin McReynolds prior to the 1994 season and he went on to swipe 50 bases in his first year in Kansas City. 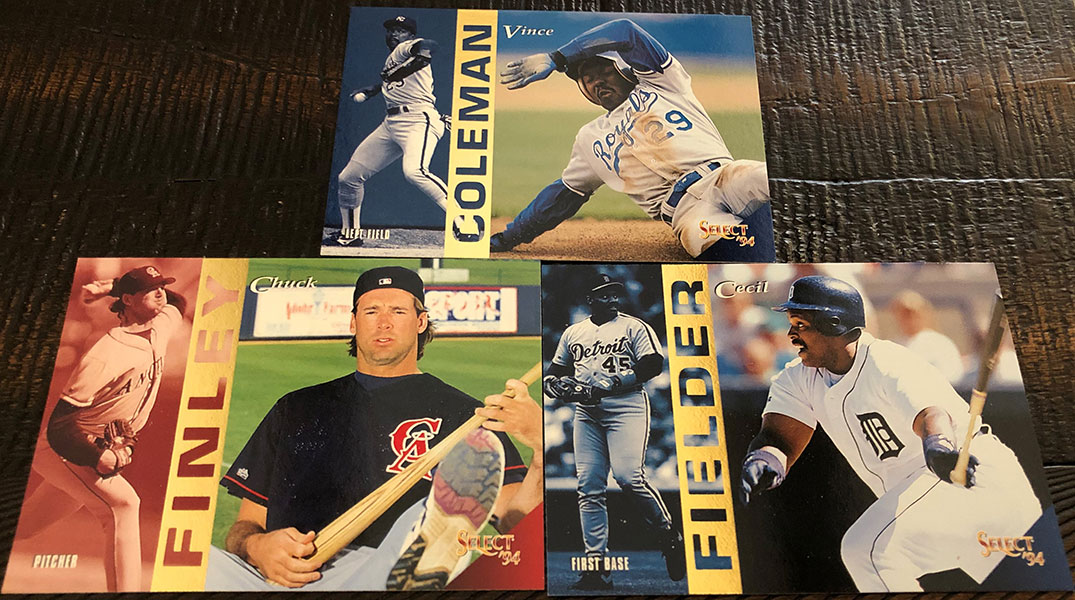 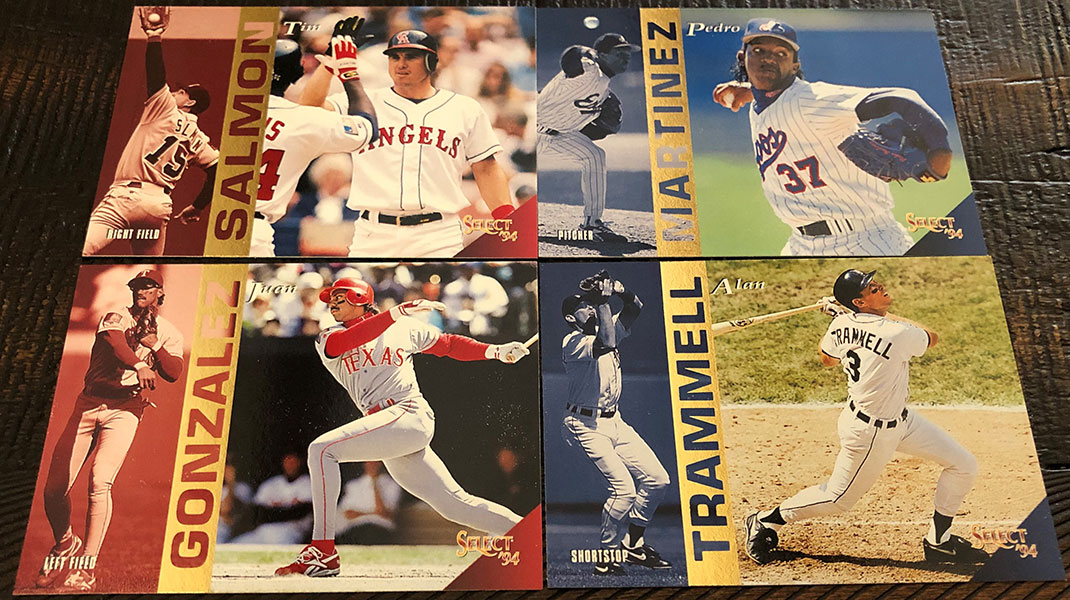 Lastly, the Trammell card back. I like these backs. Another player photo, their 1993 stats, career stats and a short write up — there’s a little bit of everything here. The backs also featured Pinnacle’s counterfeit protection bar codes. Seen through a lenticular lens available only from Pinnacle, it reads PINNACLE. 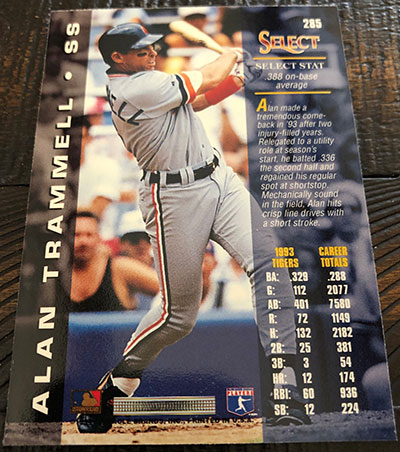 This was an eBay find, and at less than $1 per pack, I wouldn’t mind buying this product again. The insert cards are the chase here, and I do like the chase set designs and quality. That Larry Walker Special Skills insert was the pull of the box, for me at least. I will say, though, as good as the inserts in this product look, I think Select’s 1993 debut has the better inserts. Good luck finding that one for under $50 though, because there is a Derek Jeter Rookie Card on the checklist.

2021 Topps Heritage Baseball Is a Trip