In 2008, Upper Deck decided to take on the challenge of highlighting every single game of the MLB season within a single card set. Well, they succeeded — kind of. 2008 Upper Deck Documentary Baseball did create a huge 4,890 card base set that recapped every game. And not only that, the checklist has a card for each team in every game. However, I don’t think the set turned out quite how they originally envisioned.

While the base design is fairly well done, in my opinion, there are many issues with the cards. First, there are no player names on the card fronts. Second, the player pictured on the front often has nothing to do with the game recap at all. The cards just seem completely disconnected. Luckily for me, this was a cheap buy from my local card shop’s discount table.

Fun Facts are provided by Bleacher Report National MLB Columnist Joel Reuter. You can follow Joel on Twitter (@JoelReuterBR) and check out his work at Bleacher Report. You can also catch Joel regularly on Beckett with his One-Sheet Collections series.

Pack 1 fun fact: Along with outfielder Cameron Maybin, a young Andrew Miller was one of the key pieces the Marlins acquired from the Tigers in the Miguel Cabrera blockbuster. 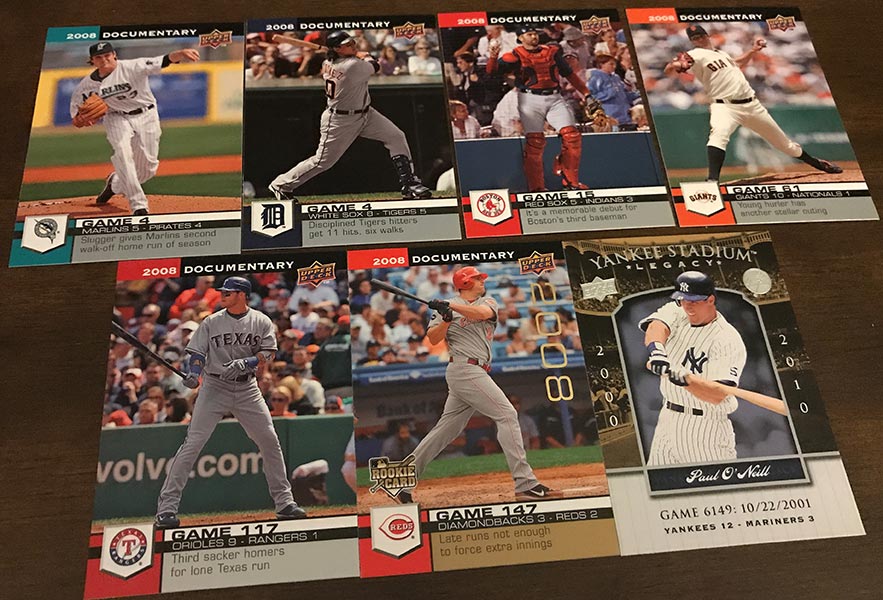 Pack 2 fun fact: Originally drafted as a third baseman, Alex Gordon made 40 errors in his three seasons at the hot corner before moving to left field where he became a seven-time Gold Glove winner. 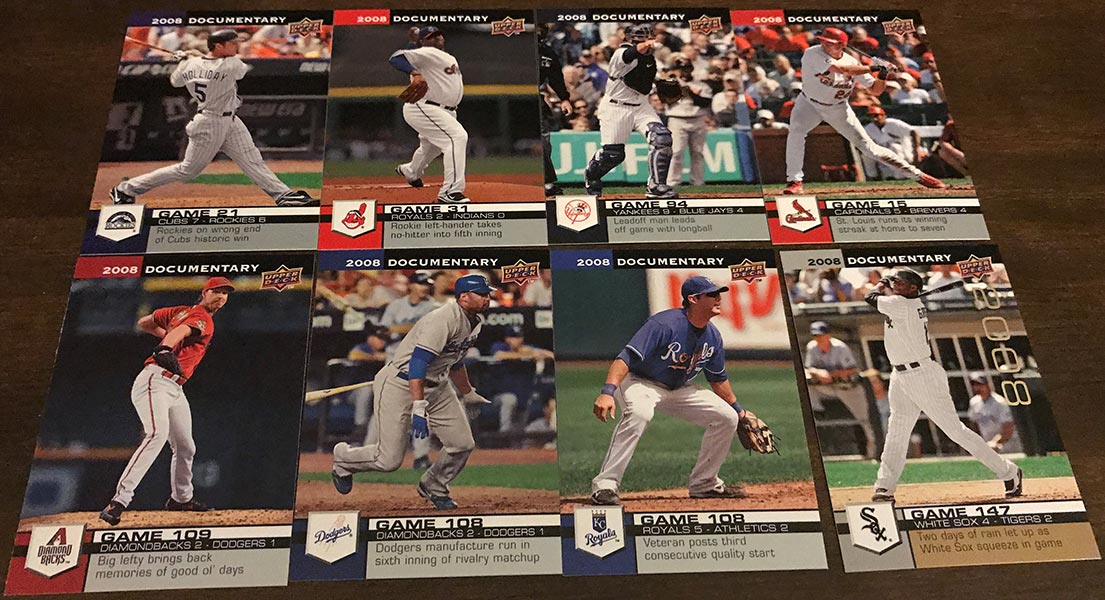 Pack 3 fun fact: Scott Kazmir led the AL with 239 strikeouts in 2007 and he made his second of three career All-Star Game appearances in 2008. 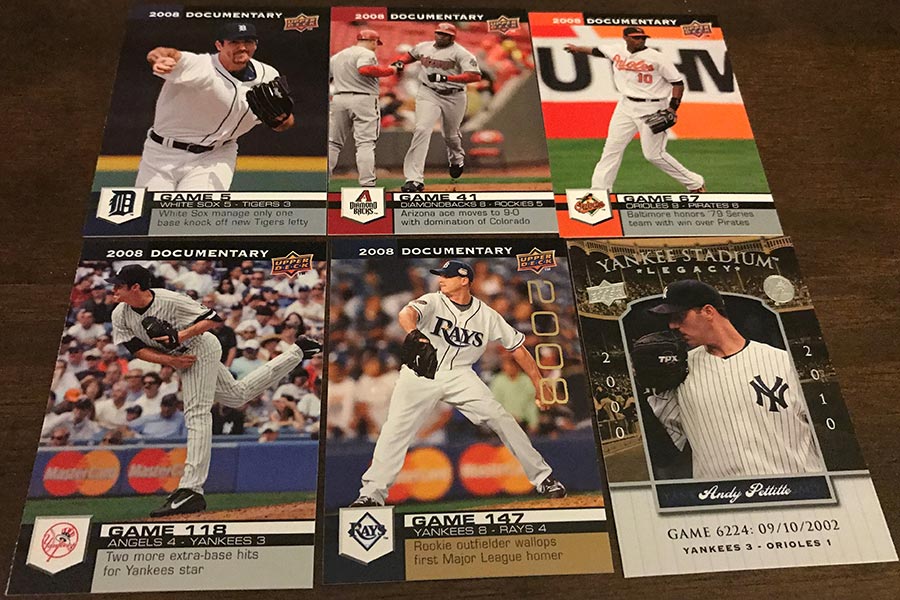 Pack 4 fun fact: Eric Gagne was part of a revolving door approach to the ninth inning for the Brewers in the late 2000s. He converted 10-of-17 save chances with a 5.44 ERA in 50 appearances in his only season with the team. 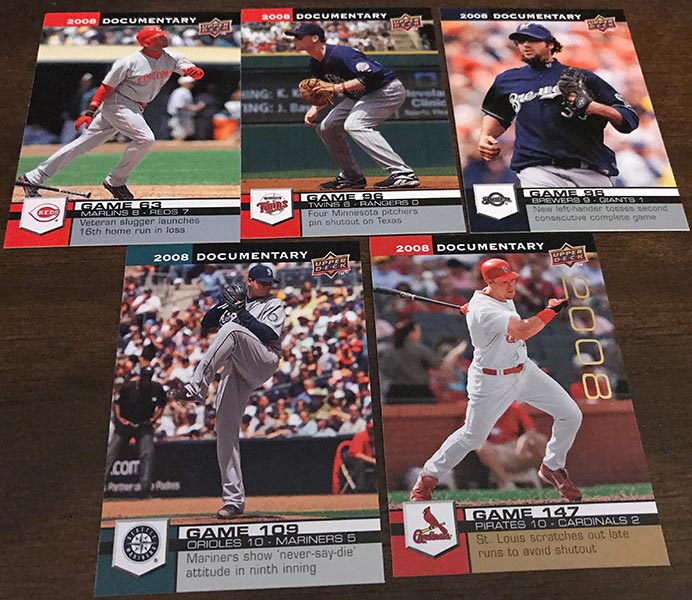 Pack 5 fun fact: Geovany Soto is one of just two rookie catchers in MLB history to start the All-Star Game. The other is Sandy Alomar Jr. with the Indians in 1990. 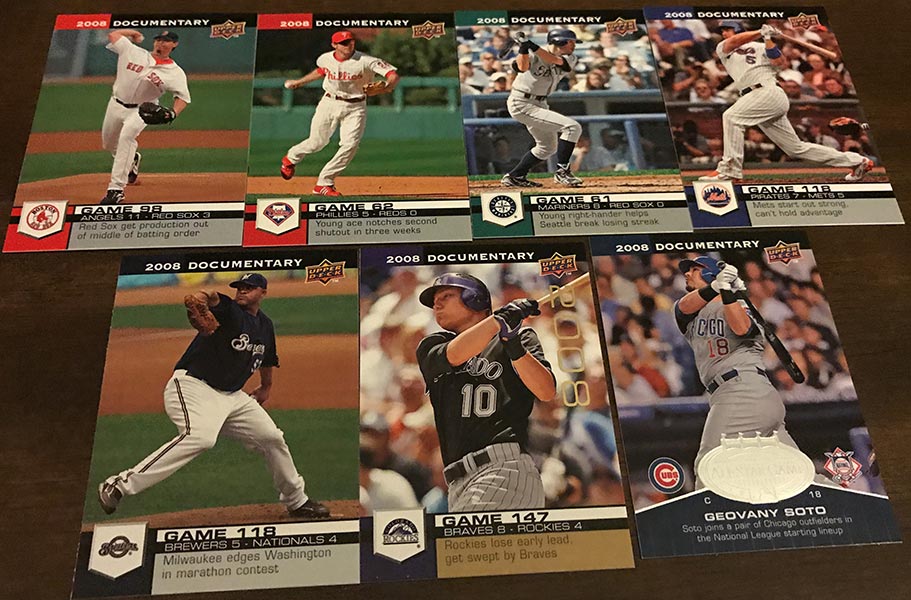 Pack 6 fun fact: Pat Neshek was an All-Star for the first time at the age of 33 in 2014. He also returned to the Midsummer Classic in his age-37 season. 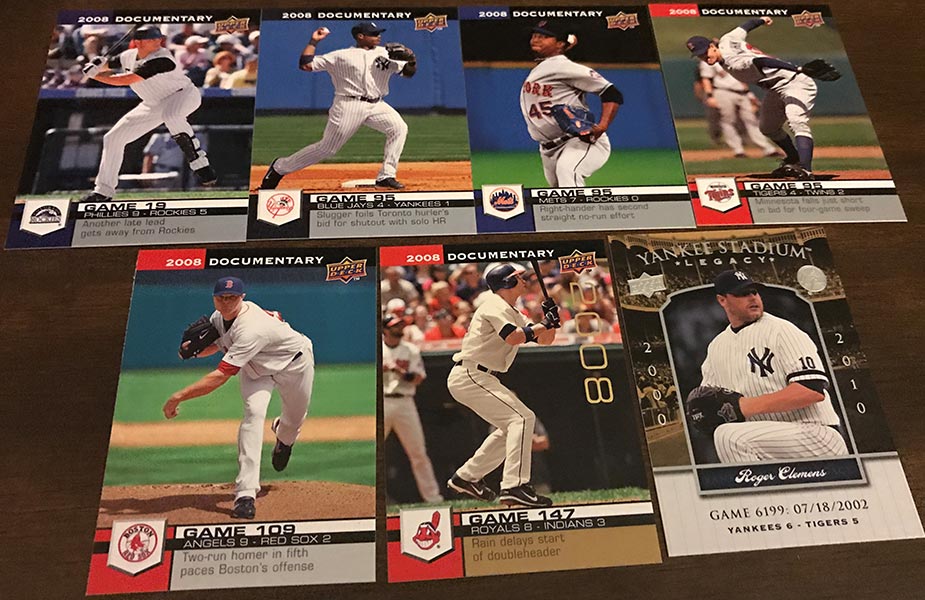 Pack 7 fun fact: It’s easy to forget that Miguel Tejada played for the Astros. He was acquired from the Orioles in a deal that sent five players the other way and made the NL All-Star team in each of his two seasons in Houston. 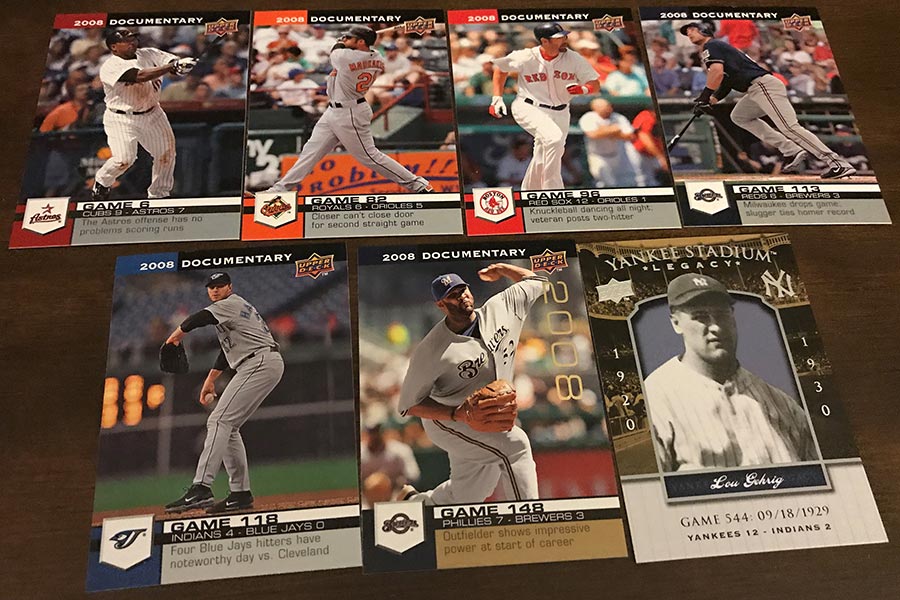 Pack 8 fun fact: One of the most underrated players of his era, J.D. Drew ranked 10th among all outfielders during the 2000s with 39.2 WAR. 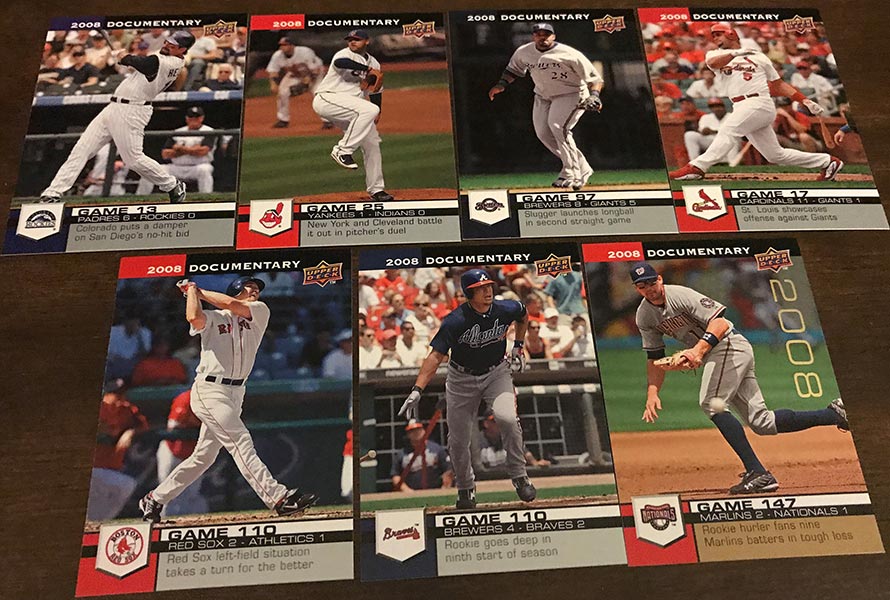 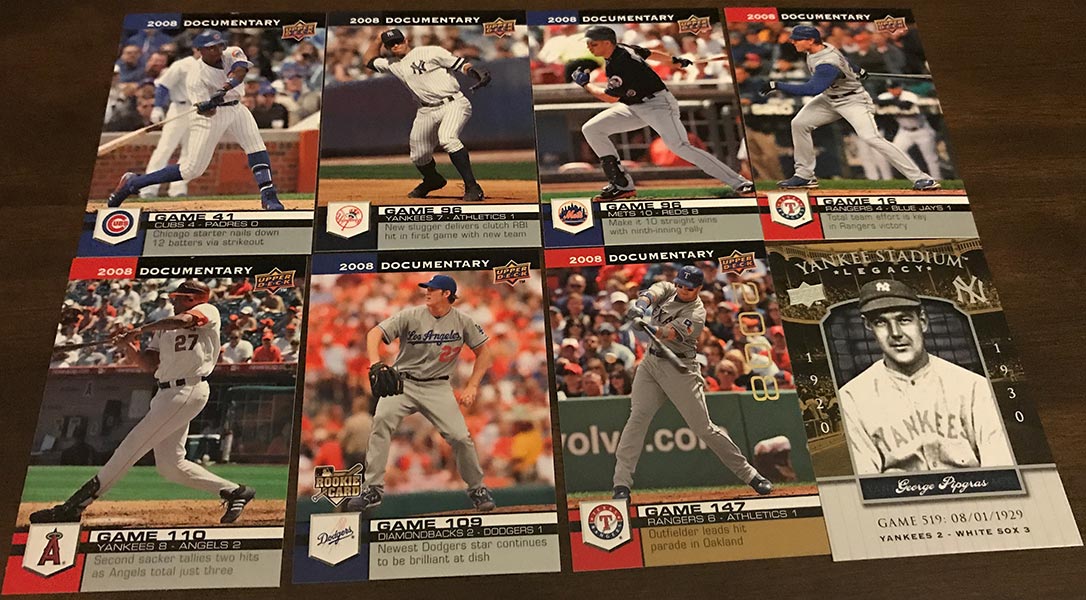 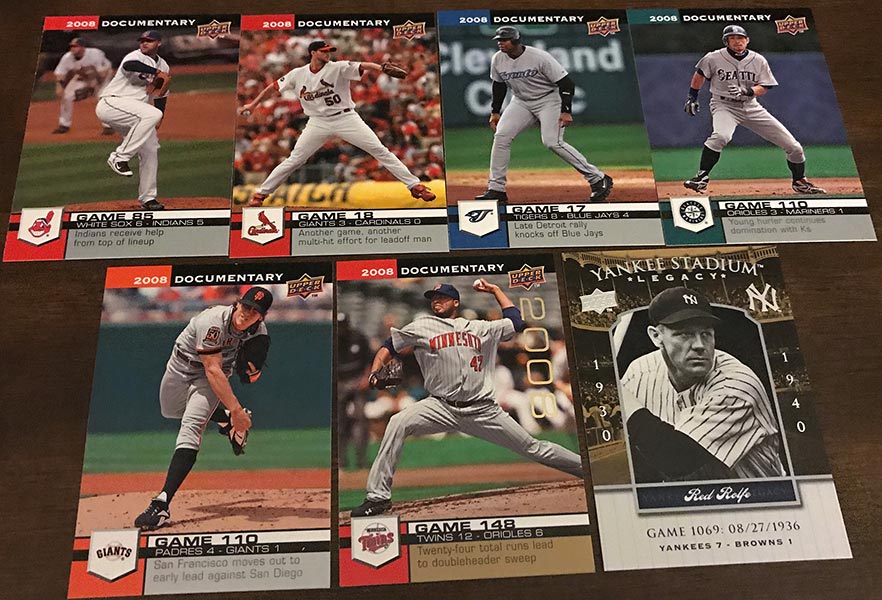 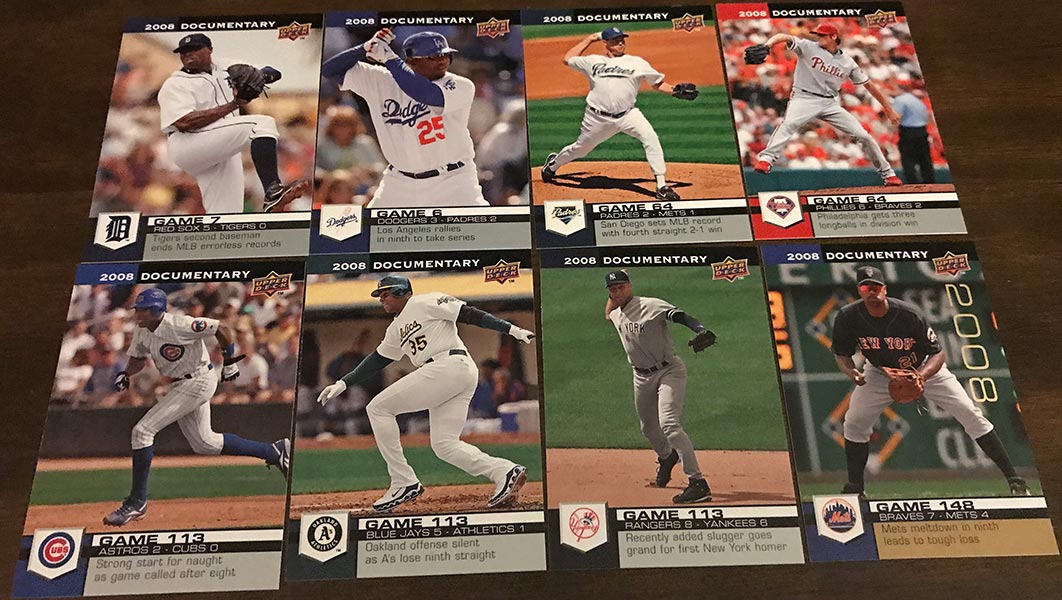 Pack 14 fun fact: Jason Bay began the 2008 season in Pittsburgh, but he was eventually traded to Boston in the three-team blockbuster deal that sent Manny Ramirez to the Dodgers. Brandon Moss, Andy LaRoche, Bryan Morris and Craig Hansen made up Pittsburgh’s return package. 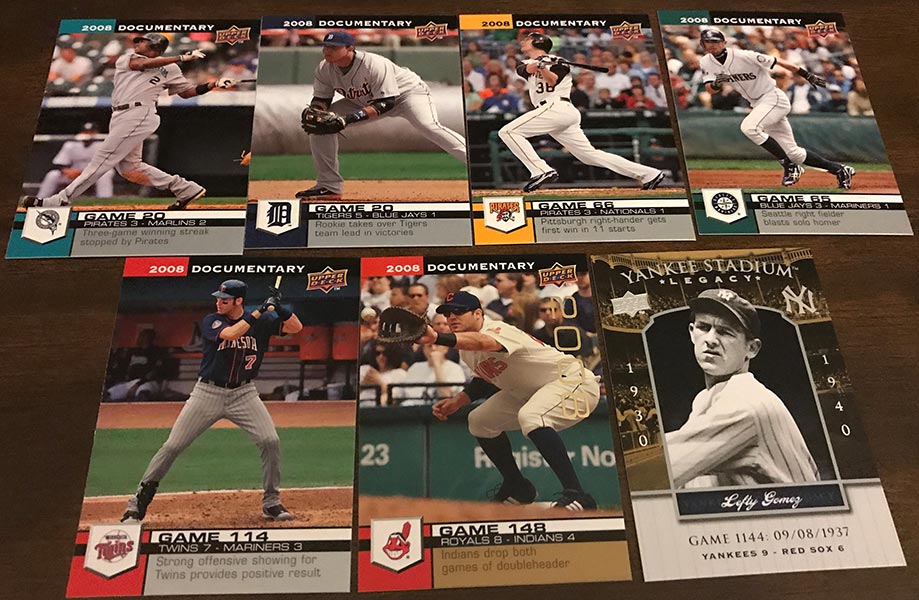 Pack 15 fun fact: Billy Wagner stuck out 1,196 batters in 903 career innings, good for an 11.9 K/9 strikeout rate that ranks first all-time among pitchers with at least 900 innings of work. 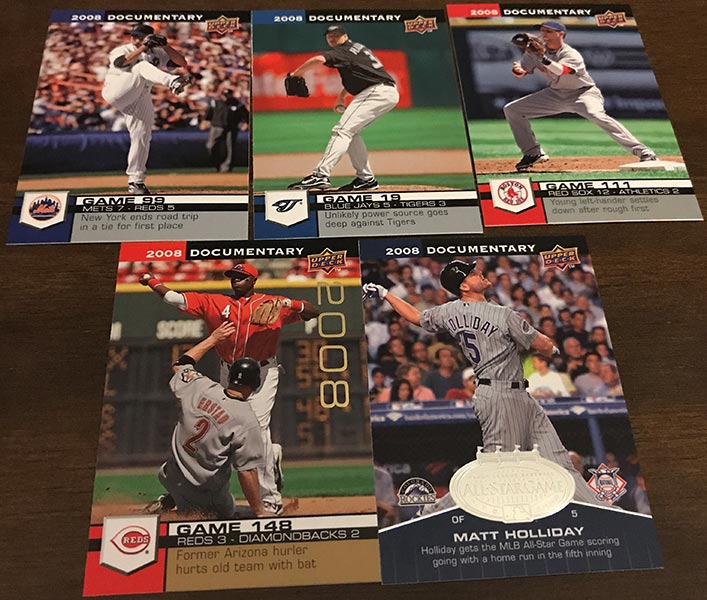 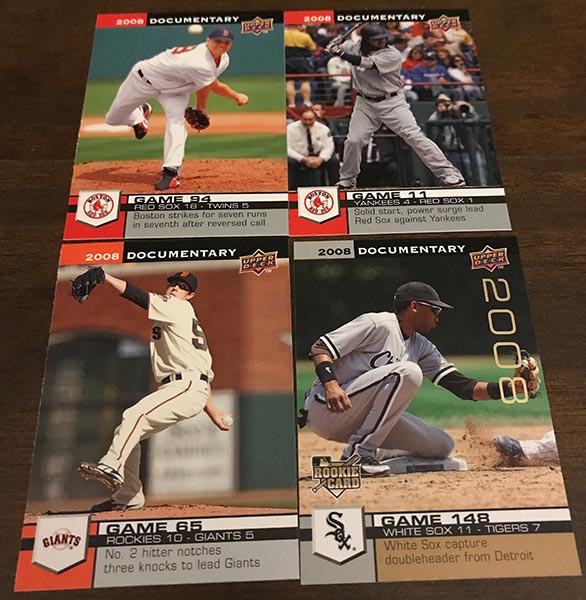 Pack 17 fun fact: Two years after he was signed to an above-slot bonus as a fifth-round pick, Jeff Samardzija made his MLB debut. He posted a 2.28 ERA in 26 appearances out of the Cubs bullpen in 2008. 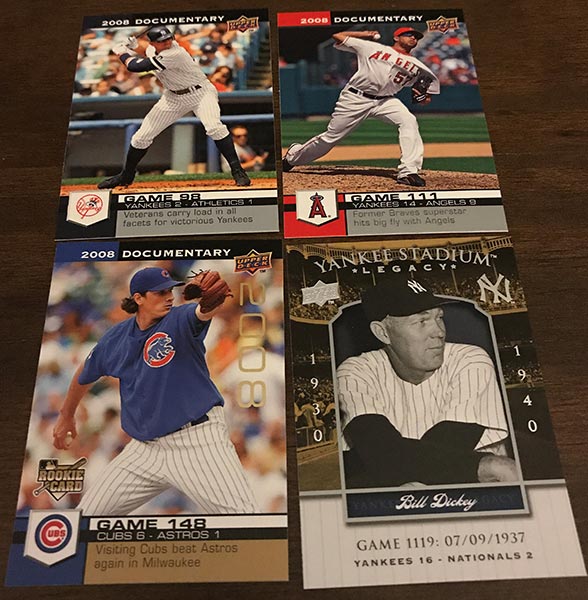 Pack 18 fun fact: I dare you to name a more random two-time All-Star than Justin Duchscherer. 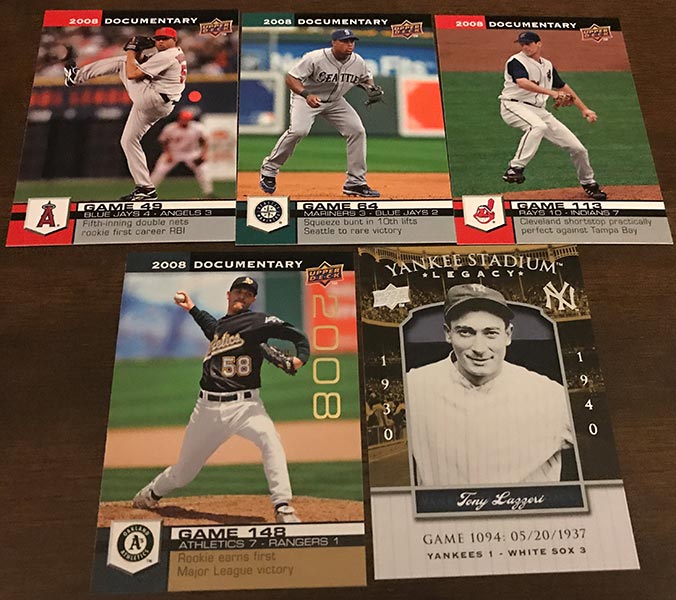 Pack 19 fun fact: The Reds traded a 38-year-old Ken Griffey Jr. to the White Sox at the 2008 trade deadline in exchange for Nick Masset and Danny Richar. 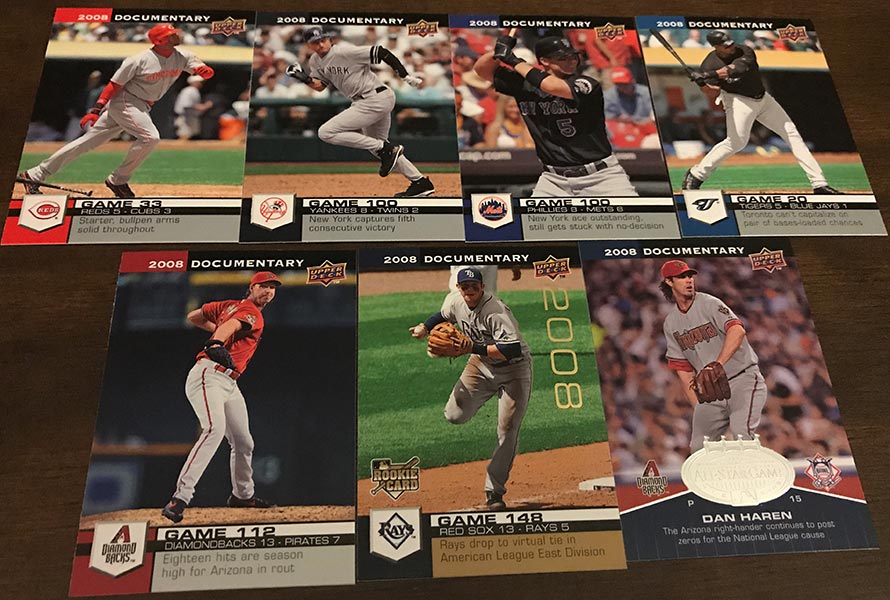 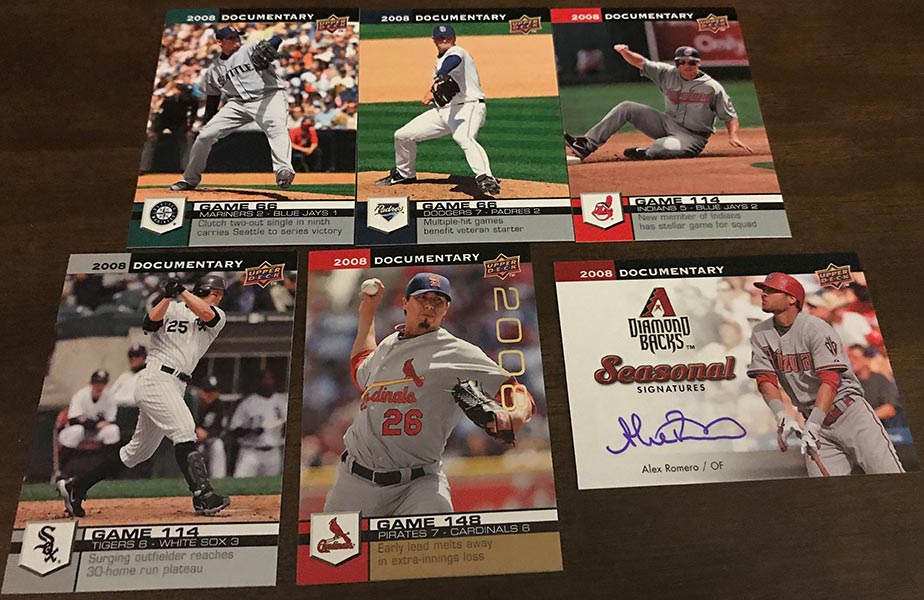 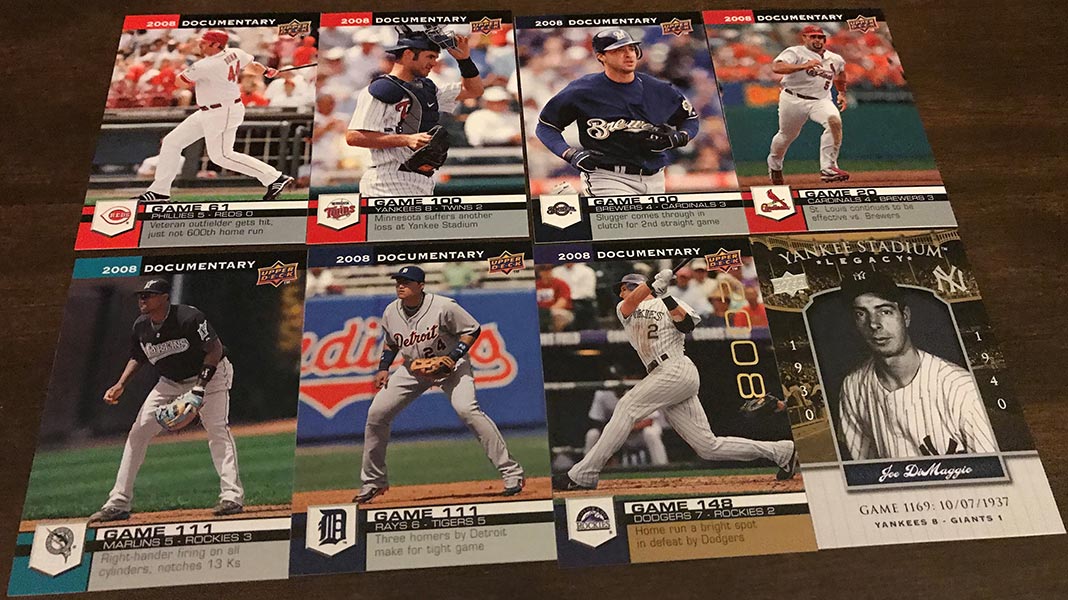 Pack 22 fun fact: Jonathan Papelbon finished his career with 368 saves, good for ninth on the all-time list. It’s interesting to think about his potential trajectory had the Red Sox continued to develop him as a starter. 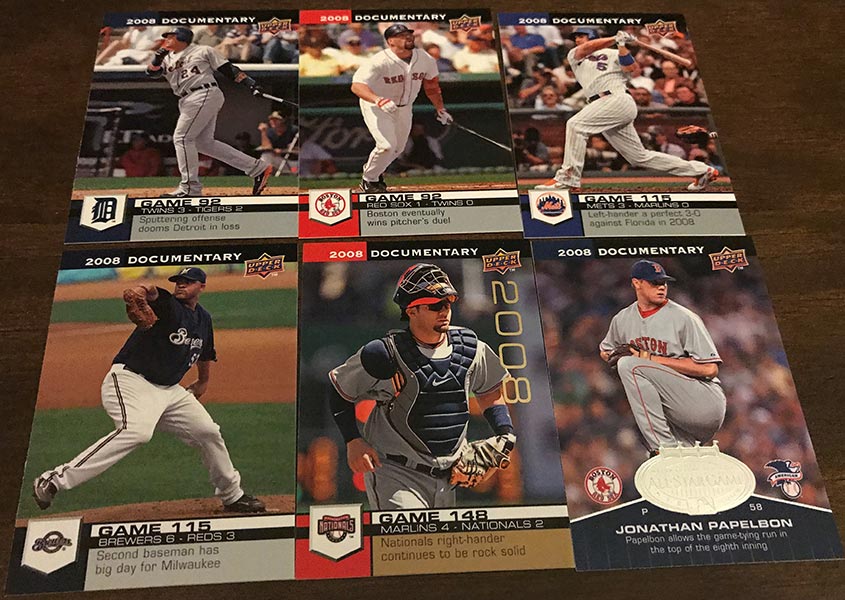 Pack 23 fun fact: Johan Santana led the NL in ERA (2.53) and finished third in Cy Young voting in his first season with the Mets in 2008. The Twins acquired four players in the trade that sent him to New York, including Carlos Gomez and 2004 No. 3 overall pick Philip Humber. 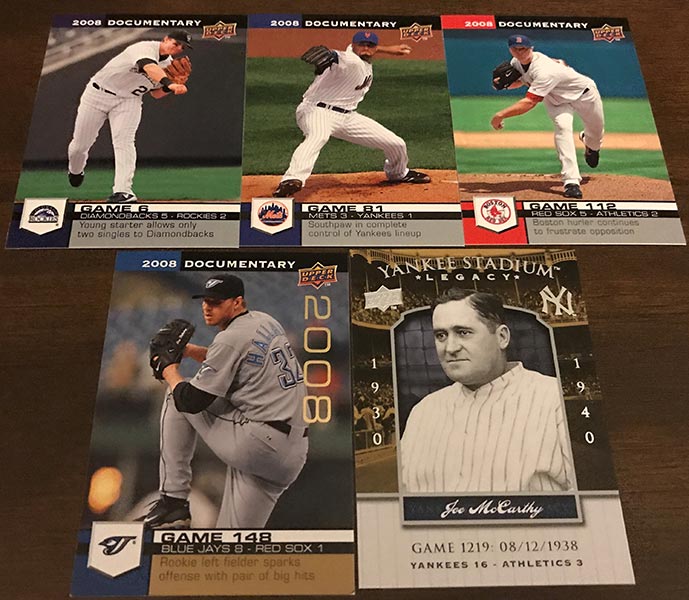 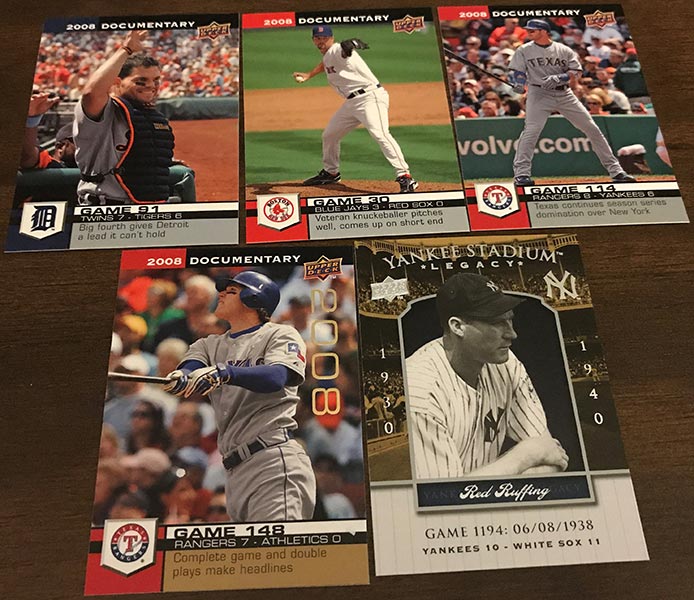 Like I said earlier, to me this set just seems very disconnected. Most of the player photos make no sense when looking at the game recaps. The saving grace for this box, for me, is the All-Star Game insert cards. I really like the look of these. Also, the inclusion of the Yankee Stadium Legacy cards add some baseball legends to my collection. I’m certainly glad I didn’t pay full price for this one, as packs cost $3 each when this product was released.