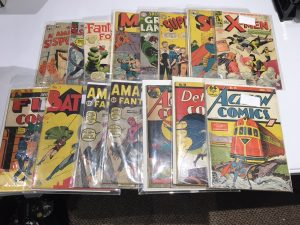 Here is the 1st part of the Golden Age and Silver Age collection that CBCS got in for grading and encapsulation the 1st day we hit our new location in Dallas. What a wonderful way to start our new operations with Beckett, in Dallas!

Some highlights included in the deal:

-Two copies of Amazing Fantasy #15, the 1st appearance of Spider-Man.

-Batman #1, the 1st book devoted entirely to Batman and, most importantly the 1st appearance of the Joker and Catwoman (originally called The Cat).

-X-Men #1, the first appearance of the original X-Men.

-Action Comics #13, the 4th Superman cover and it’s the 1st time the S symbol appears on his cape.

-Showcase #22, the 1st appearance of the Silver Age Green Lantern.

Interested in learning more about CBCS?  Please go to www.cbcscomics.com