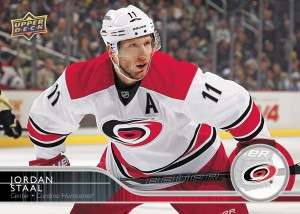 Fans of the NHL’s Carolina Hurricanes are in for a treat tomorrow evening as the team is holding a trading card giveaway that comes compliments of Upper Deck. While the Hurricanes currently reside at the bottom of the Metropolitan Division, they will be facing the Toronto Maple Leafs, who have lost 21 of their past 23 games.

It should also be noted that this is Family Night as well and packages are available that include discount tickets and concessions for four people. The team is also holding a Diaper Drive and those that donate a package of diapers will be entered into a draw for autographed prizes that include a team-signed jersey.