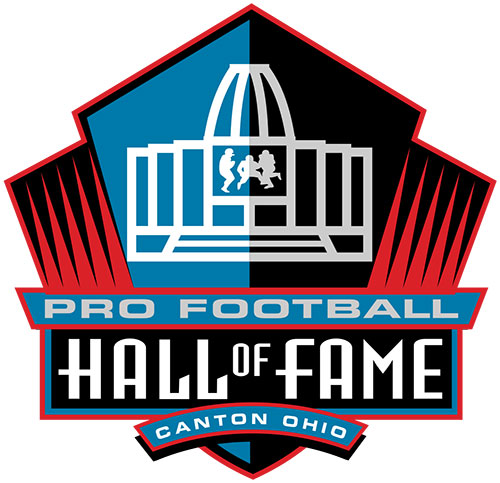 The NFL has announced the 15 finalists for induction into the Pro Football Hall of Fame this year. This 2018 class includes first time nominees Ray Lewis, Randy Moss, Brian Urlacher, Steve Hutchinson and Everson Walls. Will Terrell Owens finally get in? Hall of Fame players are amongst the most popular players collected in the hobby. Adding a possible Hall of Fame rookie card is a great investment for any collection.

Here are a few options to look for in this class. 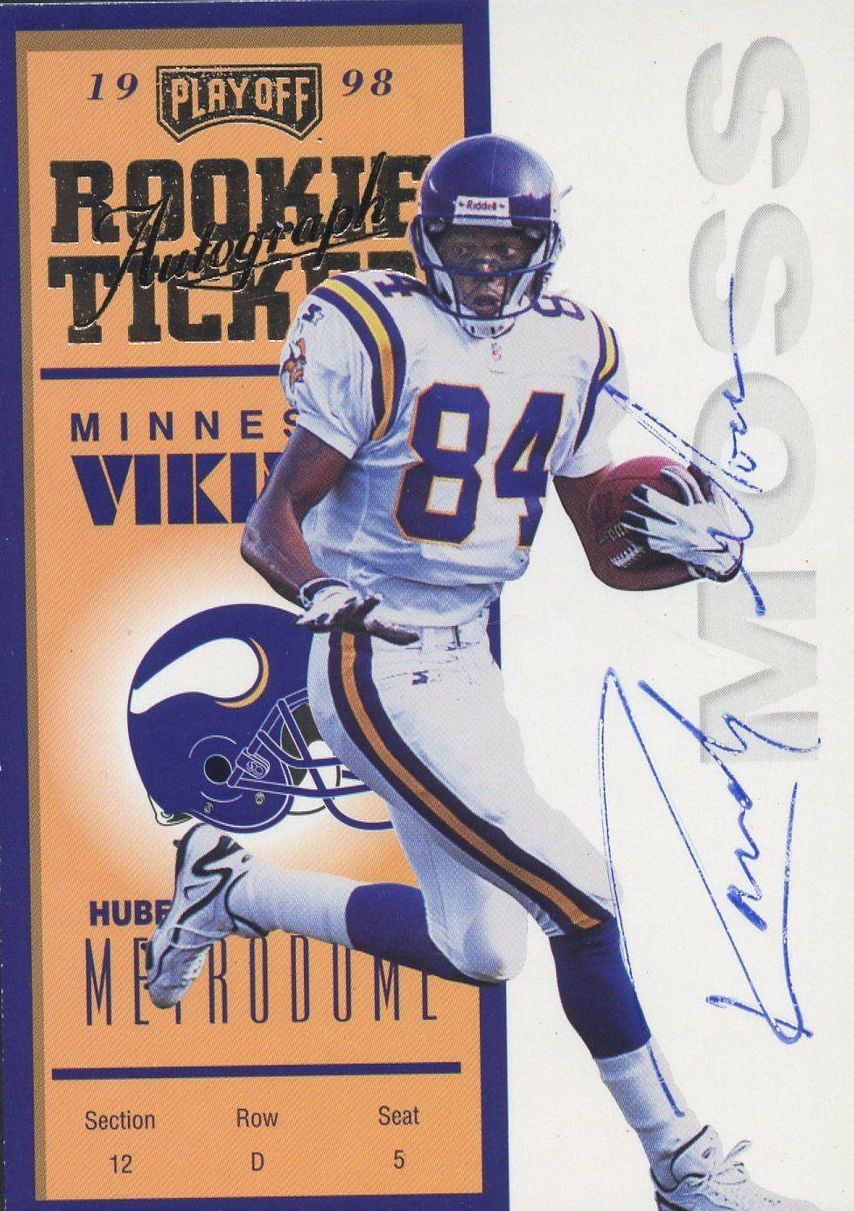 Moss was one of the most dynamic receivers in the league from 1998 until 2012. Nicknamed “The Freak” for good reason, he made many outstanding plays that people still talk about to this day. He still holds the single season reception touchdown record with 23. Moss accumulated a total of 156 touchdowns in his career. One of his most sought-after cards is his 1998 Contenders Autograph Blue ink rookie cards. This card is very hard to find, especially in good condition. Within the last three months less than 10 have been sold on eBay and the price has ranged from $500-650 ungraded. 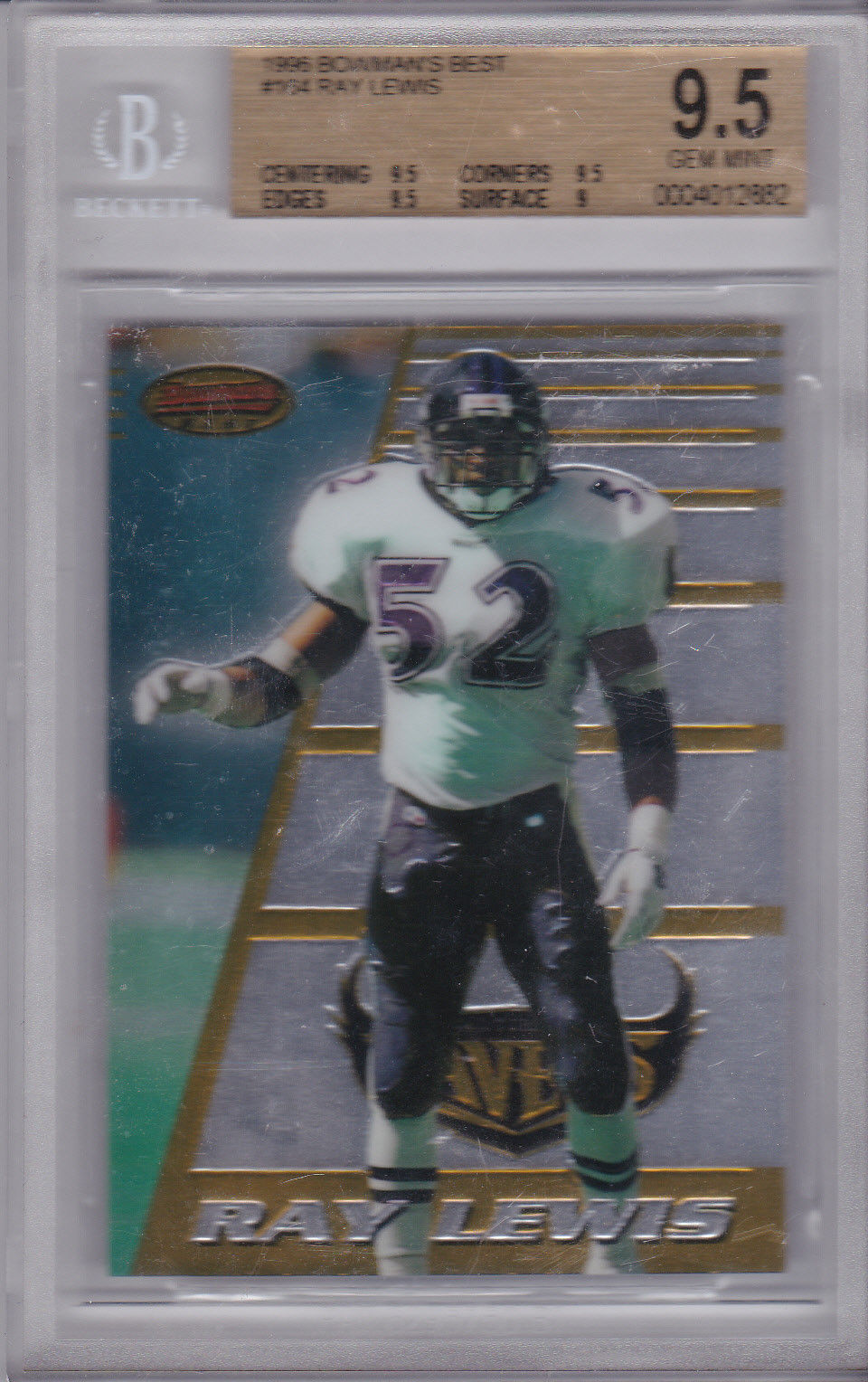 Arguably one of the best motivators to ever play the game, Lewis’s career was defined by effort and exuberance. Lewis is also a 2x Super Bowl winner and will always be remembered for his inspiring and bonecrushing  play. The Ray Lewis card to get is his 2000 Bowman’s Best Rookie card. The card is also offered in a refractor and atomic refractor. The base version has sold for $70 in a BGS 9.5 and $115 in a PSA 10 within the last few weeks at eBay auction. Many collectors and football experts throughout the NFL are anticipating Lewis as a lock to get inducted this year. 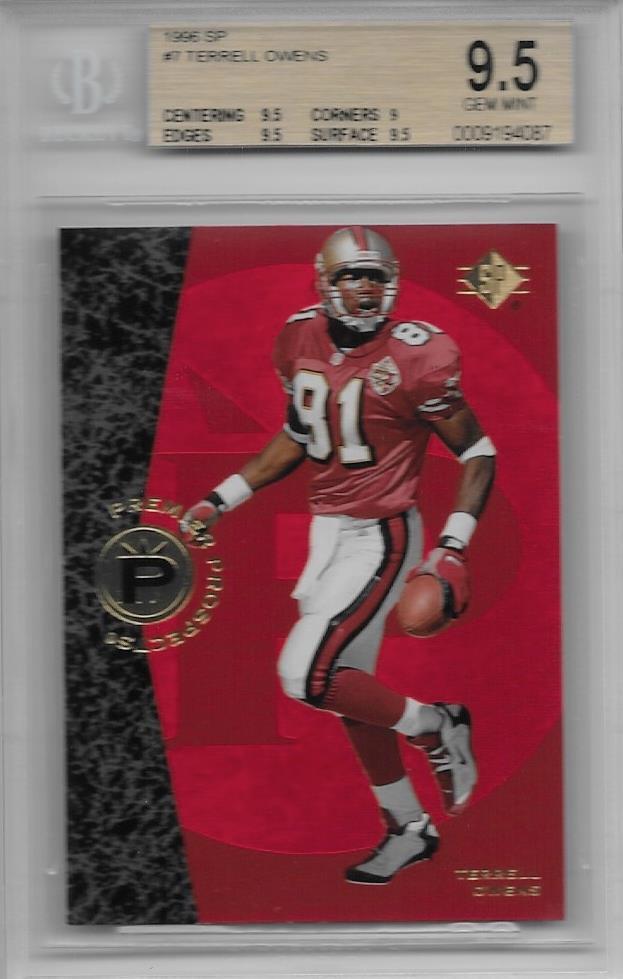 Appearing as a finalist for third year in a row, T.O. clearly has the production and numbers to get inducted, but hasn’t been voted in yet. So, will this be the year? Owens has 153 careers touchdowns which ranks 3rd all-time. He was often a dominant player, but that was always tempered by controversy, nonetheless his numbers are certainly Hall of Fame worthy. His key card remains his 1996 Upper Deck SP rookie. It’s very tough to find in a BGS 9.5, its value is in the $200 range. 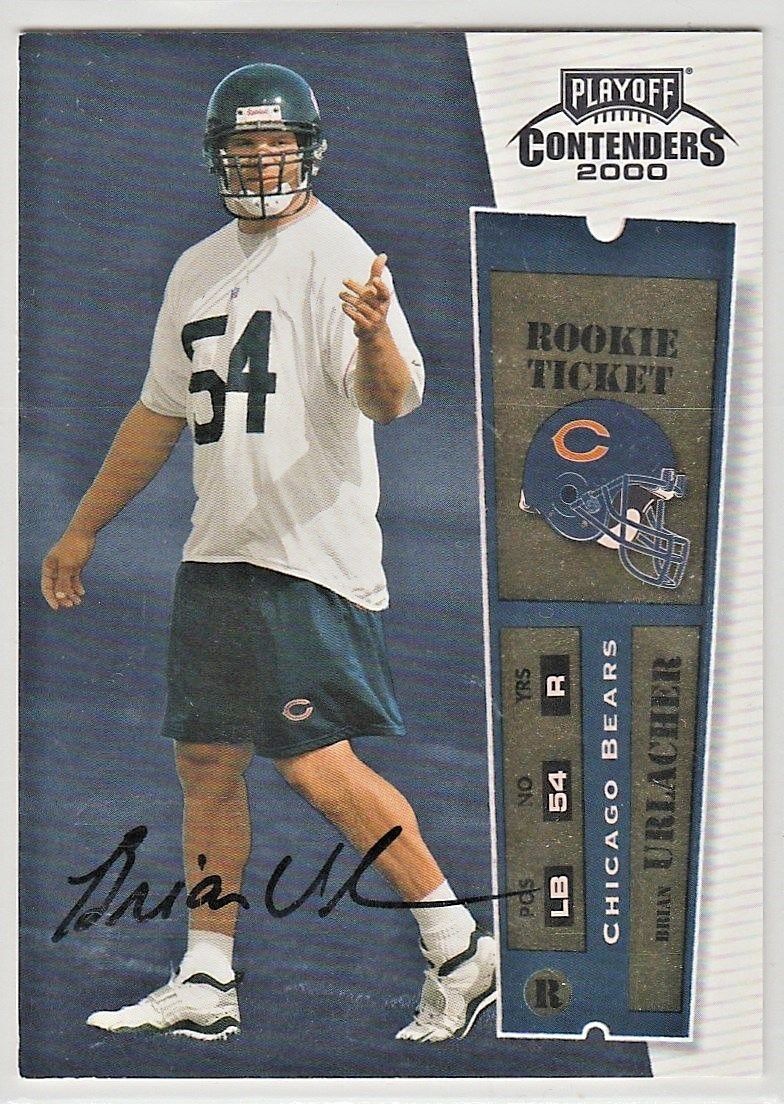 Urlacher was one of the most feared defensive players in the league during his career which spanned from 2000 until 2012 with the Chicago Bears. He was 8x Pro Bowl selection and was named Defensive Player of the Year in 2005. Appearing as a Hall of Fame finalist for the first time, Urlacher certainly makes the case for getting inducted. His best card remains as his 2000 Playoff Contenders Rookie Autograph, which sells for $55-65 range ungraded at eBay auction. 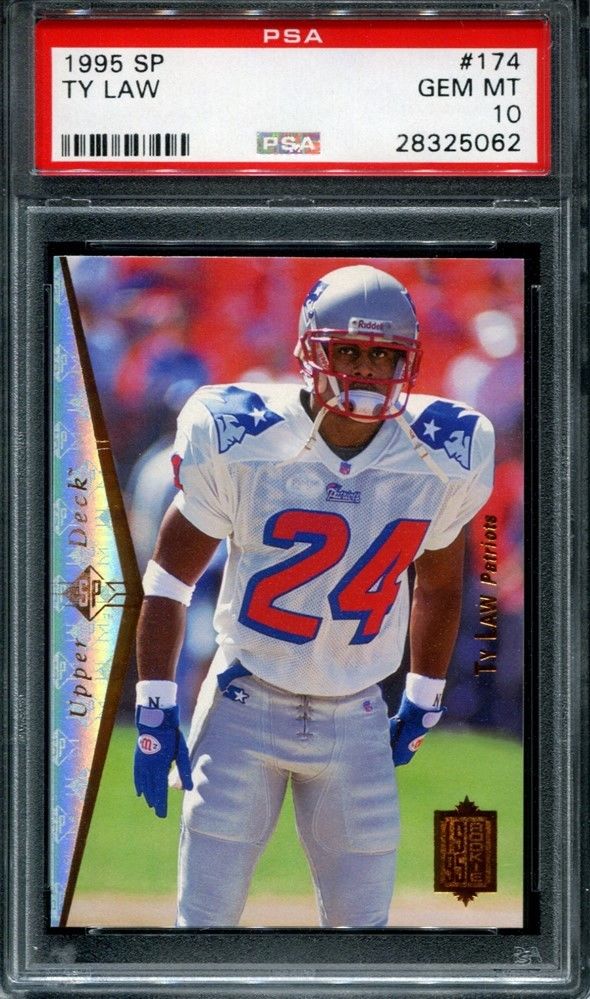 Law was a 3x Super Bowl champion and is an HOF finalist for the second time. He was a huge part of the defense that led the Patriots to the start of their dynasty in the early 2000s. He had a career total of 53 interceptions during his career and was a 5x Pro Bowl selection. Law could easily get inducted into the Hall and has the accolades to back it up. His most sought after card is his 1995 Upper Deck SP Rookie, which sells for $65 in a PSA 10 at eBay auction. 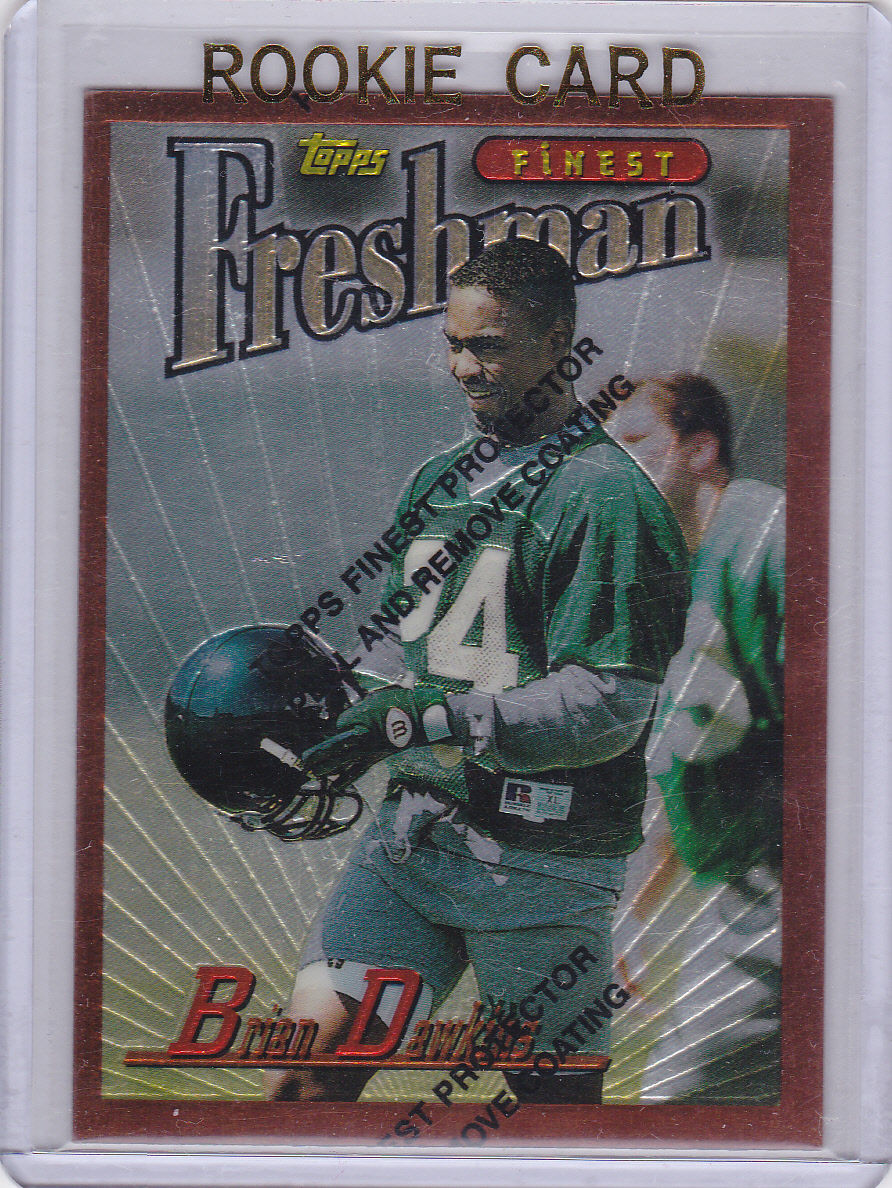 Dawkins played from 1996 until 2011 with the Eagles and Broncos. He was one of the most feared safeties in that time. He was a 9x Pro Bowler and 4x All-Pro. Appearing in his second year in a row as a finalist, Dawkins appears to be a borderline Hall of Famer. His most sought after card remains his 1996 Finest rookie which sells for $5-10 ungraded at eBay auction. 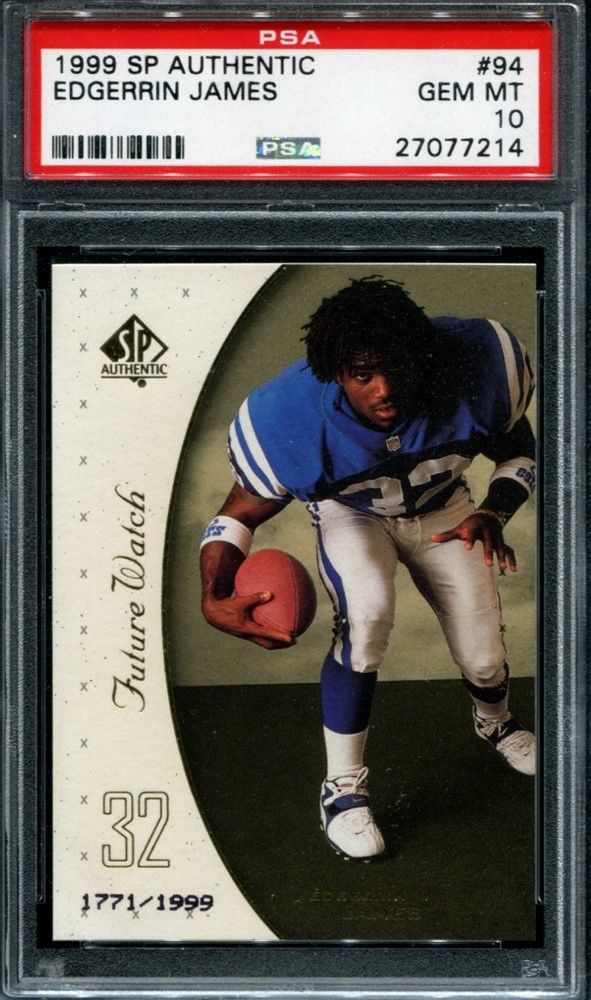 James was one of the most dominant running backs in the early 2000s. He played from 1999 until 2009 and recorded a total of 80 touchdowns and eclipsed over 12,000 rushing yards in his career. James could get in, though running backs have a tougher time. However, Terrell Davis finally got in last year and the two have similar numbers. One key card to look for in James is his 1999 SP Authentic Future Watch /1999 Rookie. A PSA 10 of this card just sold for $275 at eBay auction. 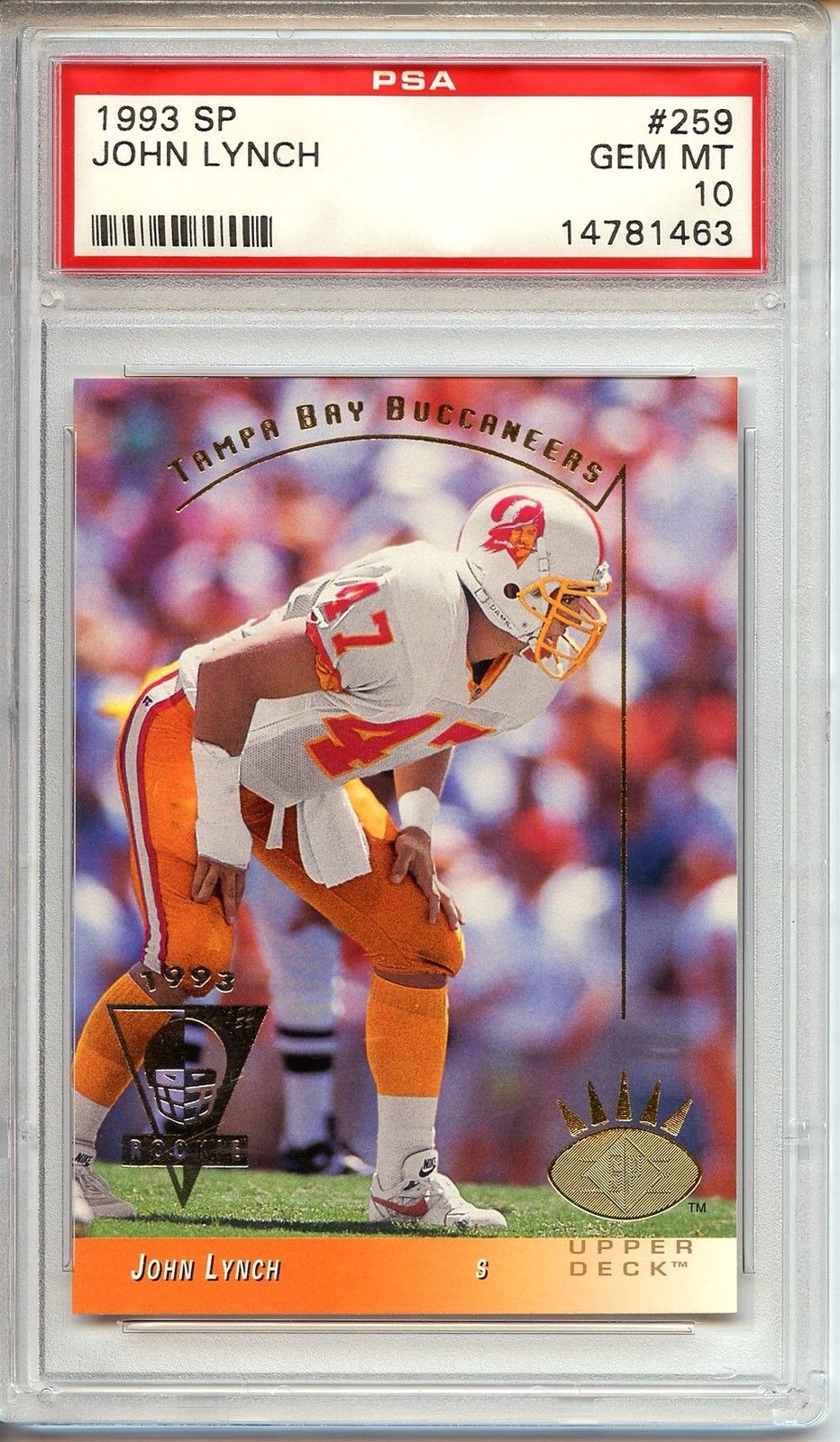 Lynch played from 1993 until 2007, he was one of the hardest hitting safeties in the league. He was a very consistent player and is now appearing as a finalist for his 5th year in a row. Lynch was a 9 time Pro Bowl selection and won a Super Bowl with the Tampa Bay Buccaneers. His most sought after card remains his 1993 SP Rookie, which sells for $30 in a PSA 10 at eBay auction. This type of investment could pay long term if Lynch ultimately does get elected. 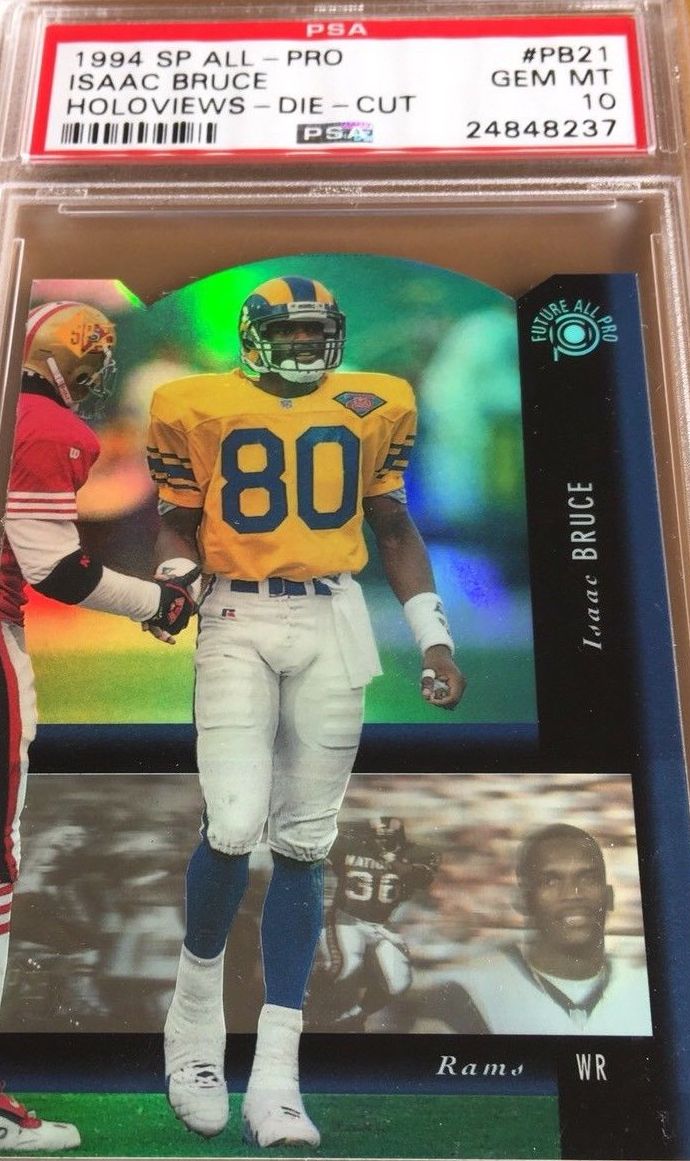 Bruce was a part of the Rams teams that were called “The Greatest Show on Turf.” He played from 1994 until 2009 and finished his career with 91 total career touchdowns and won a Super Bowl with the Rams. A finalist for the second year in a row, Bruce is another borderline Hall of Famer and could get even get in eventually. His most sought-after card is his 1994 SP All-Pro Holoview Die Cut Rookie, which sells for $180 in a PSA 10 at eBay auction. This is a tough card to find and perfect to submit for grading. 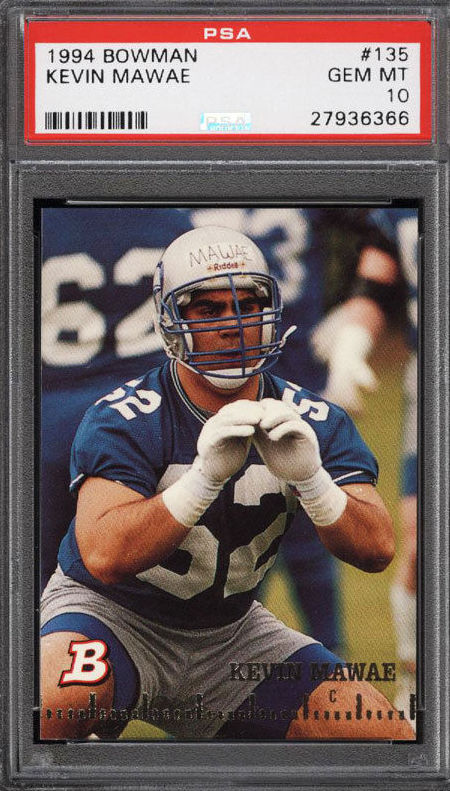 Mawae played from 1994 until 2009 with the Seahawks, Jets and Titans. Another second year finalist, Mawae was one of the most consistent centers in the league. He was also an 8x Pro Bowler. Mawae should get inducted into the Hall some day. One key card to look for a of Mawae is his 1994 Bowman Rookie, which sells for $35-65 range in a PSA 10 at eBay auction. 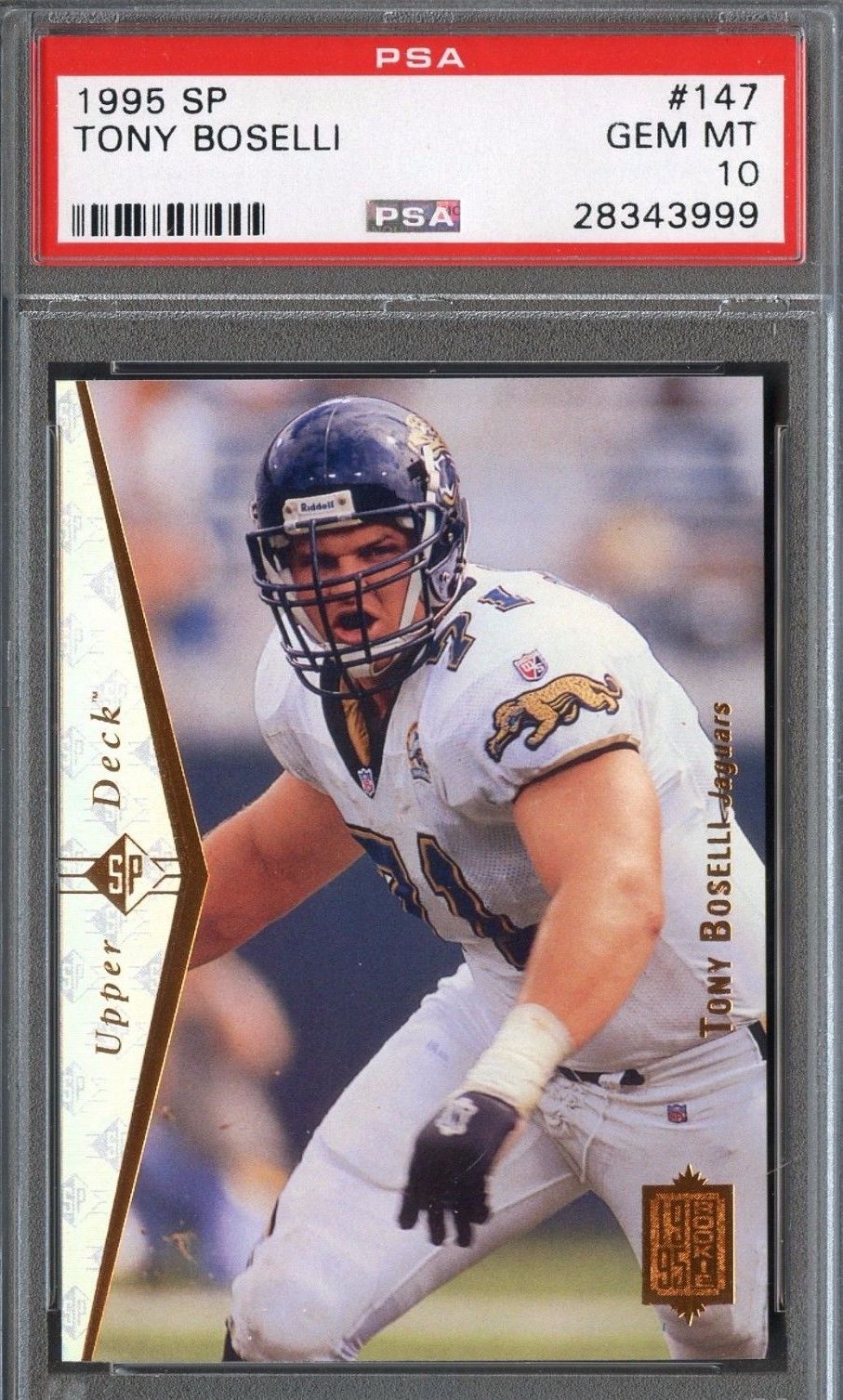 Boselli played Left Tackle from 1995-2001 with the Jaguars. He was a 5x Pro Bowler and made the All-Pro team three times. Despite a shorter career Boselli was so dominant at his position that he is a finalist for the second year in a row. His most sought after card remains his 1995 SP rookie which sells for $25-35 in a PSA 10 at eBay auction. 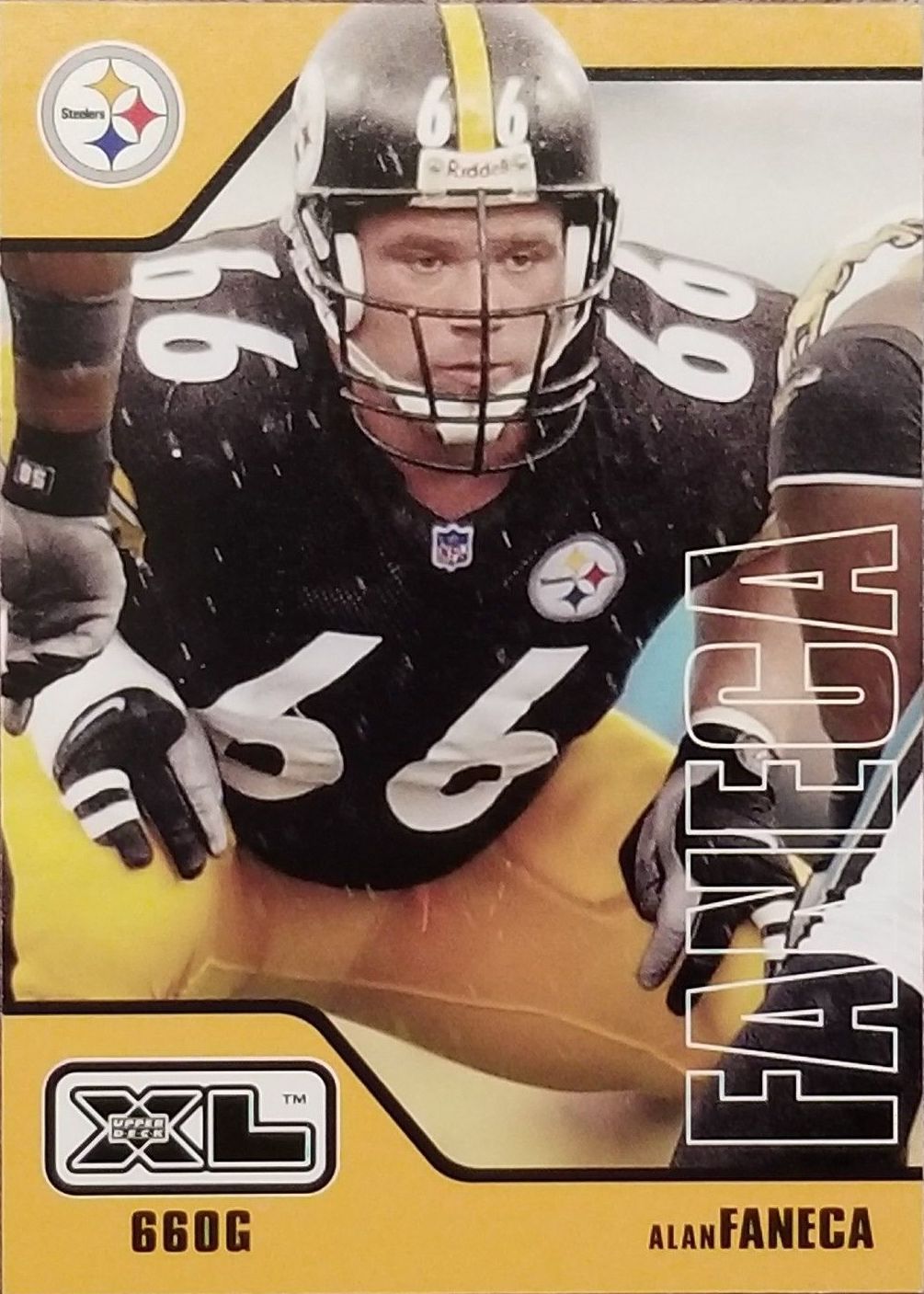 Faneca played from 1998 until 2010. He was one of the best linemen in the league during his career, he was a 9x Pro Bowler, 6x All-Pro and a Super Bowl Champion with the Steelers. This is Faneca’s third year as a finalist. His most sought-after card remains his 2002 Upper Deck XL, which sells for $45 ungraded at eBay auction. 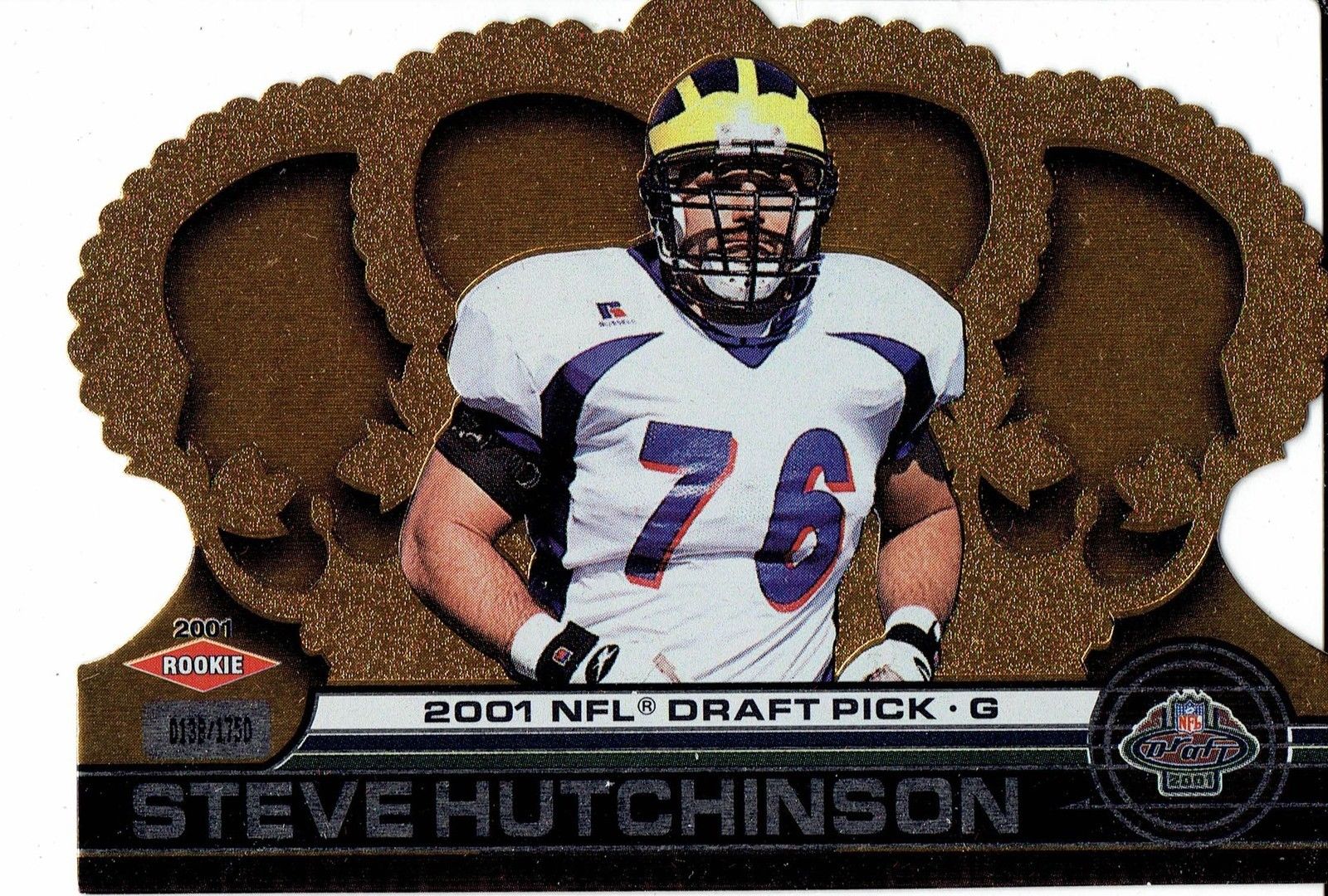 Hutchinson played from 2001 until 2012 with the Seahawks, Vikings and Titans during his career. He was a 7x Pro Bowler. He is a finalist for the first time. One card to look for of his is his 2001 Crown Royal Die Cut Rookie /1750, which sells for $75 at eBay auction. They’re becoming tougher to find. 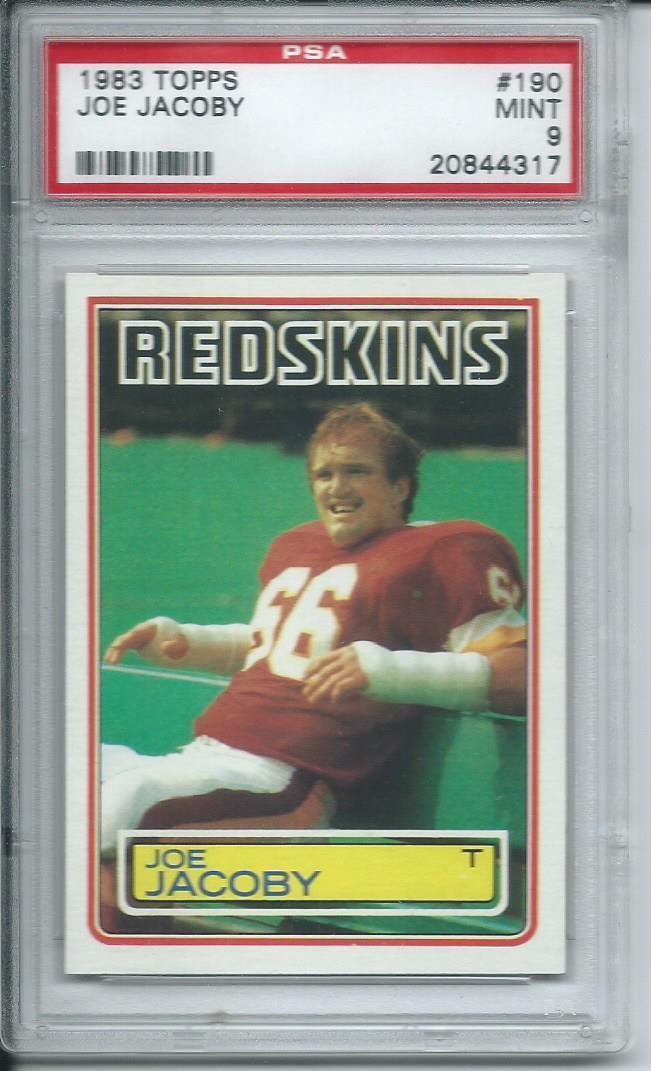 Jacoby played from 1981 until 1993 with the Redskins. He was a 4x Pro Bowler, and 3x Super Bowl Champion. He is a finalist for the third time. His most sought after card remains his 1983 Topps Rookie, which sells for $20 in a PSA 9. 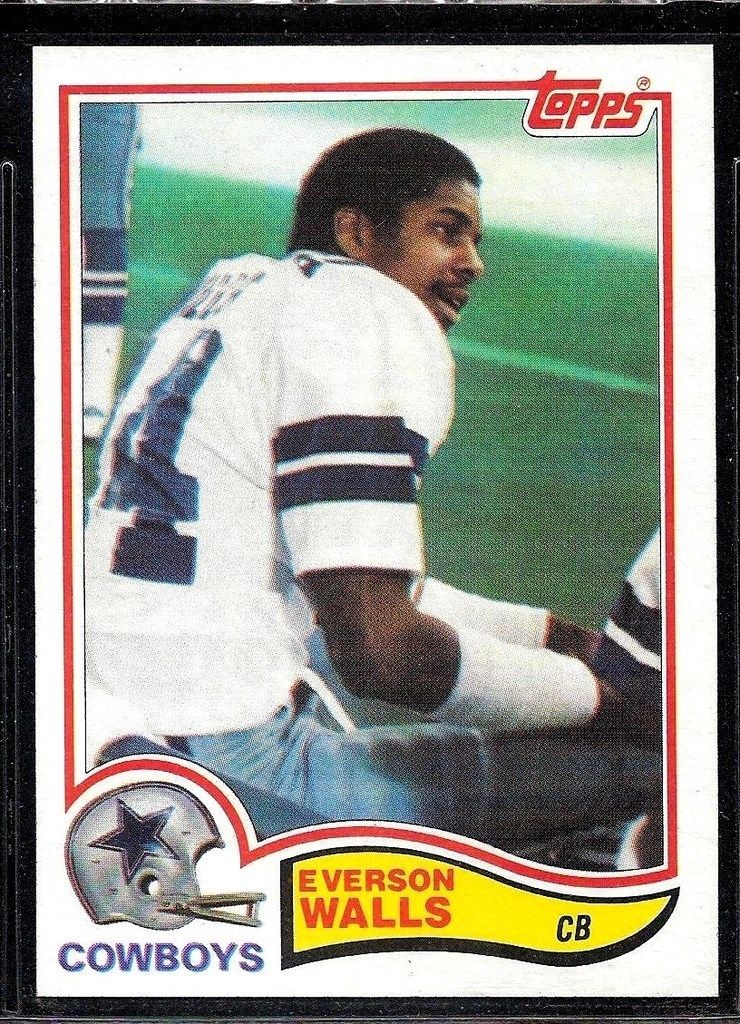 Walls played from 1981-1993 with Cowboys, Giants and Browns. Now in his 20th year of eligibility, he is appearing as a finalist for the first time. Walls could easily be a surprise candidate to get inducted this year in 2018. He was a 4x Pro Bowler, Super Bowl Champion and had 57 interceptions during his career. His most sought-after card is his 1982 Topps rookie which sells for $5-10 range. This could be a great card to have graded and his value could easily double if he’s elected.

The Pro Football Hall of Fame induction class will be announced during the NFL Honors television program which is aired Saturday February 3, just one day before the Super Bowl. The value of these players should only continue to grow if any of them are inducted into the hall! Who do you think will get inducted?