We’re back this week with the Cards & Kicks: Ken Griffey Jr edition. When Jake and I sat down to discuss this series the focus was always going to be on basketball. Simply put, it just made too much sense for it not to be. The NBA was experiencing a culture shift in the era that would not be ignored. However, both Jake and I knew that we had to include Ken Griffey Jr.

For everything that we love about the NBA and what was happening there in the ’90s, Jr. was all that and more to the MLB. Nike understood this and in the summer of ’96, we got what was one of the best ad campaigns to ever run during an election year. No, I’m not talking about Bill Clinton or George Bush. I’m talking about Ken Griffey Jr. for President.  In a word, it was brilliant, but what else would you expect from Nike.

The marketing team rolled out bumper stickers, buttons, t-shirts, hats, and even television ads. US Citizens were reminded that Griffey could hit a curveball, he could crush a fastball, and he was always ready for a change-up.  He was comfortable on either side of the aisle, and most importantly, he wasn’t Reggie Jackson. Ken Griffey Jr. was a one-of-a-kind candidate that saved baseball and he was ready to save the country.

Well, at least according to the ads.

While that didn’t quite turn out to be the case, sneakerheads and collectors didn’t care. Collectors got this wonderful promo card and sneakerheads got the Nike Air Griffey Max 1. Here’s my partner Jake with a little more on the Cards & Kicks: Ken Griffey Jr edition. 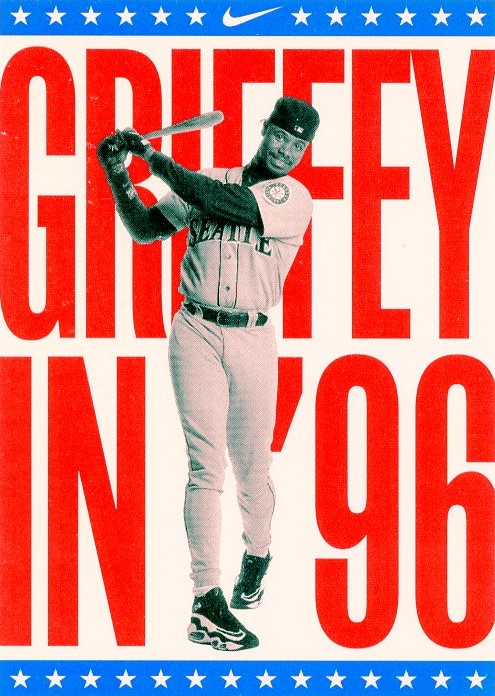 Ken Griffey Jr. was the biggest star in sports in the ’90s outside of MJ. It seemed obvious that if anyone in baseball would have a signature shoe, it’d be Griffey! It was almost impossible to find anyone with anything negative to say about him or his skills. Everyone was a Griffey fan!

Jr. won Gold Gloves every single season from 1990-1999. He also won the Silver Slugger award 7 times and led the American League in Home Runs 4 times! His swing was so smooth, so effortless, and just simply beautiful. It never seemed like he was trying to swing hard, but the ball would just jump off his bat! It was almost a daily occurrence to see Griffey on the Sports Center highlights either showcasing his gorgeous swing or making an unbelievable catch in the outfield. He perpetually wore an infectious smile just exuding the passion he had playing the sport.

Then you’d get to see him in the home run derby. It was almost a revolutionary moment when we saw him with his hat on backward at the event. Of course, my brothers and I had to wear our hats backward whenever we had our own home run derby in the backyard.

This card was essentially a Nike promotional card and reminds me of some of those classic Nike posters of the ‘80s. Just like said posters, there isn’t any new or flashy technology being used to punch it up. It just used perfect photography and iconic imagery. It really highlighted Griffey well and his swagger while keeping his new shoes clearly visible. This card is a classic representation of ’90s advertising and Ken Griffey Jr. is a quintessential ’90s star. 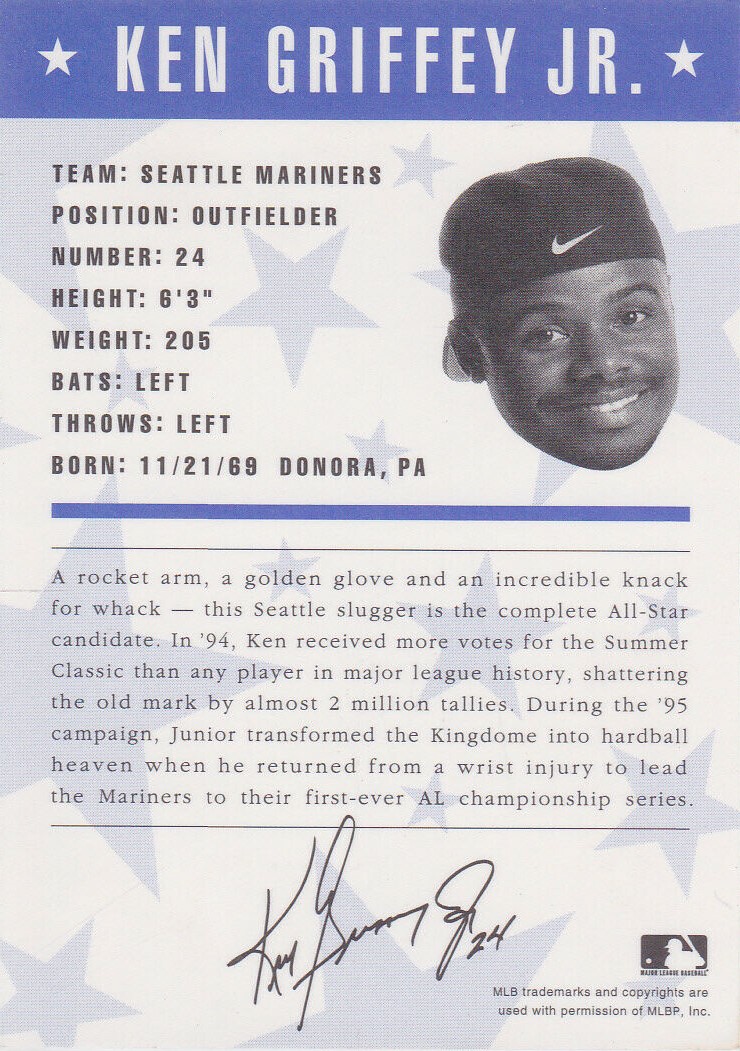 Before their “Chicks Dig the Longball” ads, Griffey in ’96 was Nike’s answer to the 18 to 35 demo watching the MLB. In the same fashion, the Nike Air Griffey Max 1’s were the answer to connecting to would-be baseball players across the country. The colorways were pivotal and originally came in three distinct designs. The first two, “Emerald” and “Freshwater”, were Mariner’s themed and widely available. However, the third colorway, “Varsity Royal”, was a much more limited release

Just like the trainers, Griffey wore a cleated version on the field as well. Again, another brilliant move by Nike, the cleated version was not a Players Edition but available to the buying public. That meant one could stand on the left side of the plate and practice Jr’s swing in his signature shoe. This led to kids on little league and high school fields everywhere doing their best Swingman. Frustrating coaches in the process.

Since their release in the mid-90s, these shoes have remained popular just as the Griffey in 96 promotional items. Collectors can still find those buttons and bumper stickers on the secondary market with ease. The card is just as easy to find as well and that’s perfect for the hobby. However, don’t be fooled but listings that state that the card is “rare”. In fact, I wouldn’t spend more than $6 all-in on one. Nonetheless, it a perfect addition to a Griffey collection. I would go as far as to say it’s a must-have. 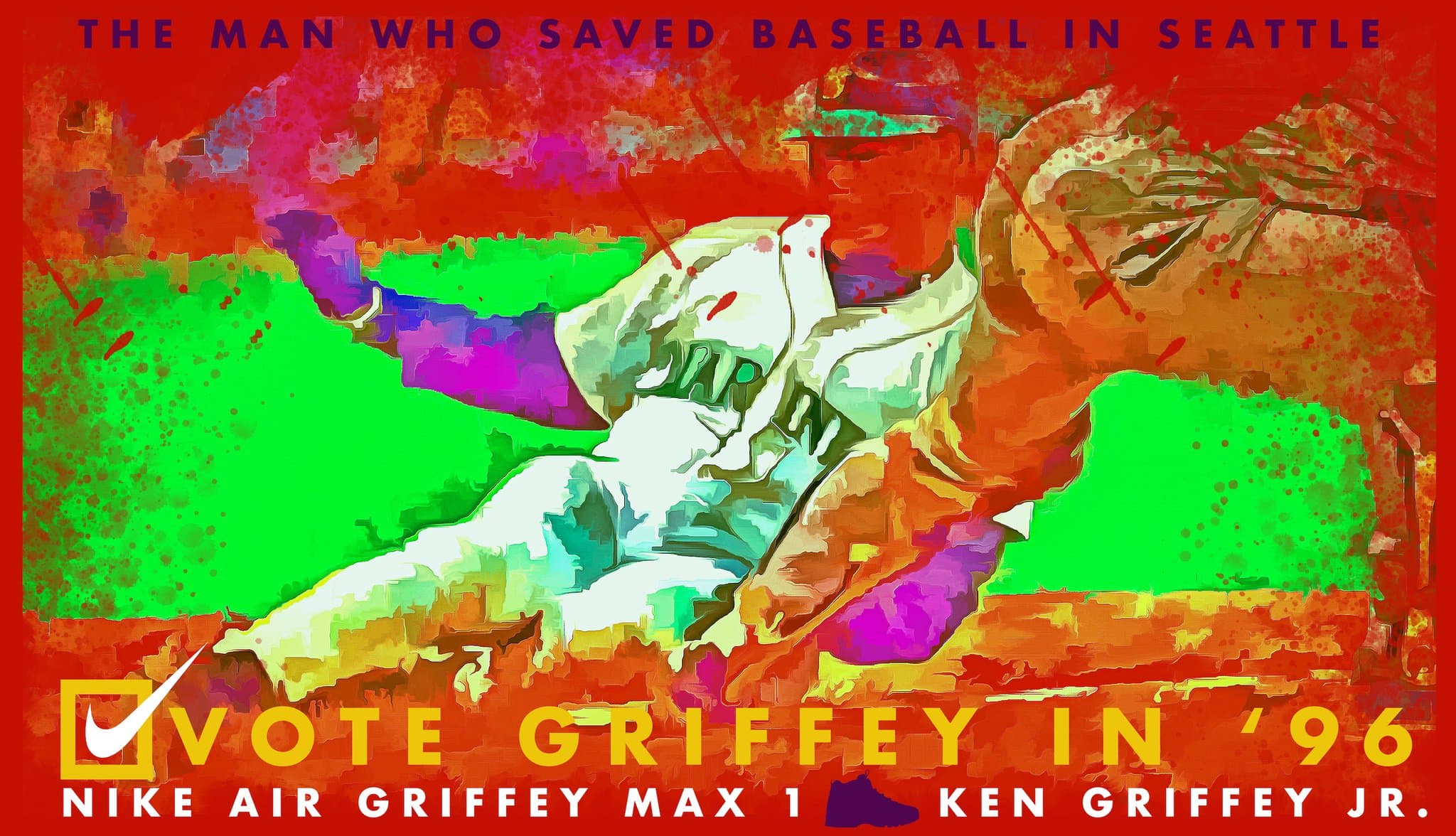 Thank’s for checking in this week. We would love to know your thoughts about Griffey Jr., so please share them in the comment section. Also, if you aren’t following Jake already, please check out his YouTube channel and hit that subscribe button. Great basketball content there. Also, the Cards and Kicks: Ken Griffey Jr. edition art was created by Scott Hodges. Make sure to check out Scott over on his site as well.