Cards can be solemn reminder of life 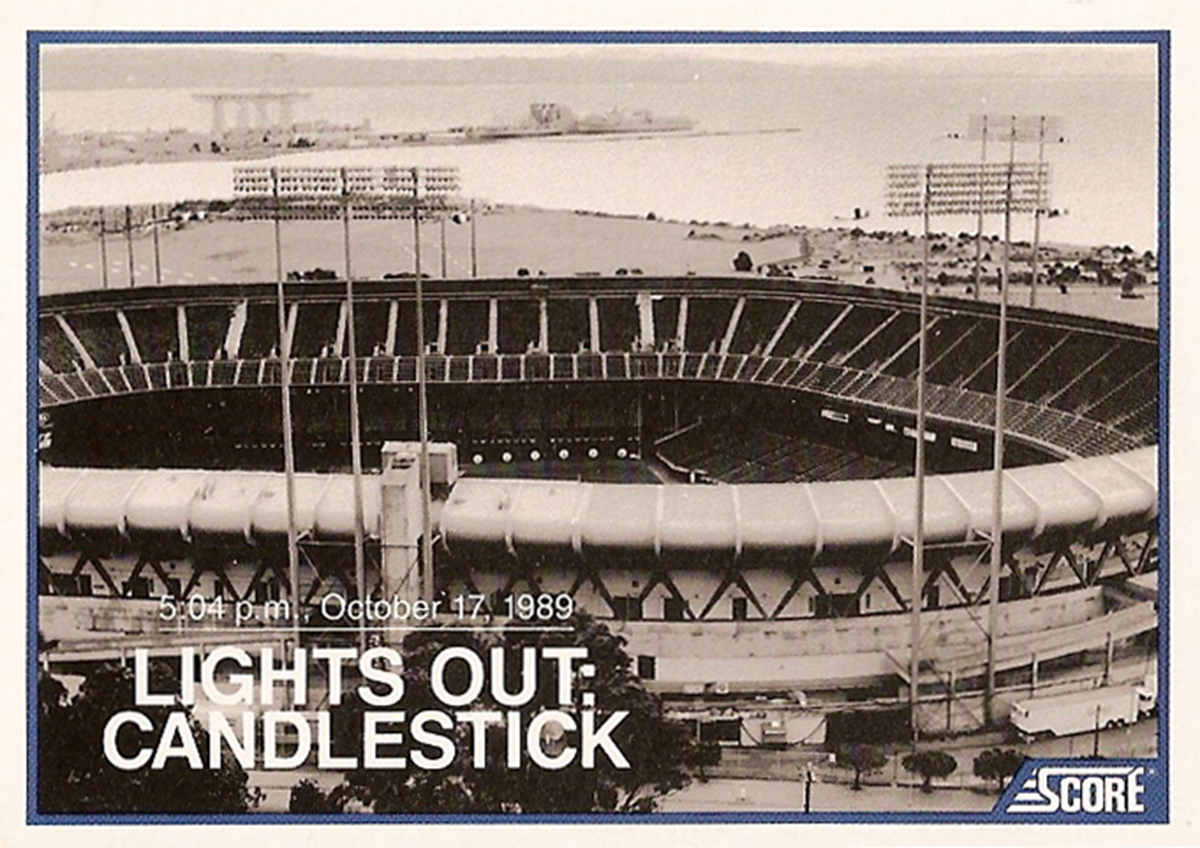 There are certain events in life that will never be forgotten, but rarely are those moments captured on a single baseball card.

Such was the case in the 1990 Score baseball set on card number No. 701, which has a black-and-white aerial shot of Candlestick Park, the former home of the San Francisco Giants. This card serves as a solemn reminder of the events of Oct. 17, 1989, the date that my life changed and I realized that life was indeed more than about sports and baseball cards. This was the day that a 6.9 earthquake struck Northern California, killing some 60 people and postponing a much anticipated World Series matchup of two local teams, the Oakland Athletics and San Francisco Giants.

For much of the country, I can imagine that the natural disaster that was the Loma Prieta Earthquake was nothing more than a speed bump that delayed the conclusion of the World Series. But for myself and others in the Bay Area, this was indeed a date that will forever be remember, including this year, which marks the 25th anniversary of the events.

Many baseball fans were beginning to settle in that evening for a night of championship baseball. The A’s had come into the game with a 2-0 series lead over their National League rivals and the series had transitioned from the confines of Oakland to San Francisco on the west side of the San Francisco Bay.

I was nine at the time and I was home with my younger sister and my classmate a good friend. He was a Giants fan, a Will Clark follower, and I was a Red Sox fan who had backed the Athletics because there was no better tandem in baseball at the time than Mark McGwire and Jose Canseco.

The time was 5:04 p.m., Pacific Time, and Al Michaels was talking on television about the start of Game 3, recapping Jose Canseco scoring a run in the previous game. I was in my family’s apartment pouring my friend and sister a drink – it was soda, Pepsi as I recall it – when the ground shook, the television screen turned static and then went black, and my guest, sister and I feared for our adolescent lives.

There were no adults around. My mother was on her way home – she was expected home from work in just a few minutes – so we children ran toward the kitchen table and dove underneath it, just as we had been taught in elementary school. When the ground stopped shaking, reality set in that something very odd had occurred. My friend tried to call home but could reach anyone because the phone was dead. He walked home and my sister and I went outside and waited for my mother, who arrived home just a few minutes later having not felt a thing as she was driving at the time.

Daylight quickly faded to muted gray tones and then pitch black as power was gone, as it would be for nearly a day in our apartment complex.

I remember bathing that night by candle light and then waking up the next morning to the sound of the television turning back on. There was no Al Michaels on television. All there was were images of burning buildings, broken bridges and the name of Buck Helm, a San Francisco man who had been trapped between layers of a crumpled freeway in San Francisco. He would remain alive in the rubble for nearly four days before being pulled to safety. He would die about a month later due to injuries suffered in the incident.

For someone my age, seeing images of this magnitude can be quite life-changing. Granted, I did not know a single person who physically suffered any injury from the earthquake, but that did not mean that I did not understand the magnitude of what had happened.

In the days and weeks after, the San Francisco Bay Area started to return to some sense of normalcy – oddly enough a word that I really did not fully grasp or hear often until more than a decade later when the events of Sept. 11, 2001.

Not long after the quake, the world again turned its attention to San Francisco to watch the remainder of the World Series. Lots was written and broadcast. But unless you were a local at the time, you may not have any real connection to it at all.

The A’s went on to sweep the Series and claim the title in the highly publicized Battle of the Bay. Even before the earthquake this series was a big deal to northern California. There were no Interleague matchups at the time. The only time these two teams met was in spring training or exhibition – in other words when nothing truly mattered.

The matchup led to all sorts of merchandise being sold all over the Bay Area, including the now infamous Split Cap, which featured the A’s logo and team colors, and the same of the Giants on the other.

The following baseball season, when much of the world had moved on from the World Series of 1989 and looked forward to their team’s start of 1990, the Score card company put out its third set.

It featured more than 700 cards, including dozens of Rookie Cards, a special Bo Jackson card depicting the two-sport star wearing his football shoulder pads while holding a baseball bat across the back of his shoulders, and of course, card No. 701, a black white image of Candlestick Park on the front and a synopsis of the earthquake and World Series on its reverse.

It’s probably worth noting that the card is No. 701, likely a nod to the fact that at one point the earthquake was said to be a 7.1 magnitude on the Richter Scale. Over time it also has been referred to as a 6.9 magnitude and a 7.0.