How timely is the Cards and Kicks: Scottie Pippen edition? Very timely. Earlier this week Pippen said, ” The Last Dance was about Michael Jordan trying to uplift himself and to be glorified” per an interview with The Guardian. The documentary series that just won’t die has been full of nuggets and tidbits since its release earlier this year.  Scottie’s frustration with the series was the lack of focus on the whole team rather than Jordan himself. However, we all knew where the focus would be, including Scottie.

Notwithstanding, Pippen’s frustration may be somewhat warranted here. Fans of the 6x Champions Chicago Bulls would have to agree that those wins probably don’t happen if not for Scottie. He was Jordan’s shadow and could do just about everything Michael could on the court. Off the court, well that’s debatable, as Jordan was a marketing team’s dream whereas Scottie was more reserved. In the end, it really doesn’t matter though, Jordan, Pippen, and the rest of the Bulls ran the NBA in the ’90s and that’s that.

Where the hobby is concerned, Pippen has had some wonderful cards in the market. For the sake of the Cards and Kicks: Scottie Pippen edition we’re looking at his 1996-97 UD3, card number 42 in the set. Again, just like last week’s Allen Iverson edition, there are several reasons why we chose this card. First, it’s affordable. Second, it’s a wonderful design that allows the colors to pop against the black and white background. Finally, it a perfect look at the Nike Air More Uptempo’s.

Here’s my partner Jake with a little more info. 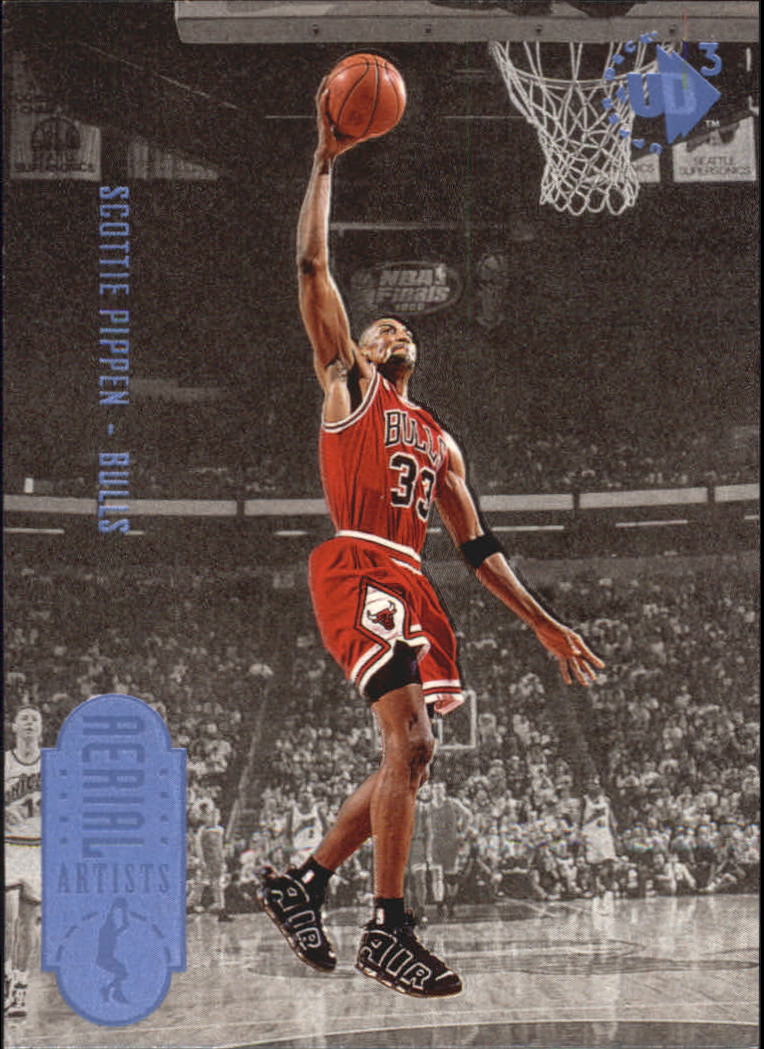 Scottie Pippen may have been the greatest 2nd star on the greatest team in NBA history. Some people may debate it, but nobody can debate that Pippen spent the vast majority of his career in Jordan’s shadow. The same was true for Pippen’s Nike Signature shoe line. However, Scottie had moments to shine in his own right and the same can be said for his shoes. This card shines the light directly on Scottie as he goes for a breakaway dunk against the Sonics in the 1996 NBA Finals and his shoes pop!

There are a few pairs of shoes I have vivid memories of Pippen rocking, but the Nike Air More Uptempo is THE pair for him. They stand out without being too flashy. They also serve as a masterful advertisement for Nike.

In the mid-90s Nike was making waves with their Air technology. Here we have a shoe that highlights that popular technology. It is all black with a well-positioned white Nike Swoosh on the toe and heel. Across the lateral and medial sides, we see ‘AIR’ in large block letters with white outlines. Then their Air cushioning spans the entire length of the shoe. It appears like this is one continuous pocket of Air but it’s actually made of 2 separate Air units.

Just think for a second about the shoes worn by the biggest stars in the 1996 NBA Finals. Jordan had his Air Jordan 11 in the BRED colorway. Dennis Rodman wore his Nike Air Shake N’Destrukt. Pippen’s Nike Air More Uptempo stood out amongst those incredible shoes and we didn’t even mention Gary Payton’s or Shawn Kemp’s shoes!

It was hard to go anywhere without seeing a middle school boy wearing the Air More Uptempo in the mid-90s. Then in the summer of 1996 Pippen and Nike blessed us with a new colorway fresh for the Olympics. The 1996 Team was heralded as the ‘Dream Team II’ and the stars needed shoes to match the lofty goals. Again these beauties stood out amongst the rest. Today they are reproduced in countless colorways and even in collaboration with Supreme for all the “Hype-Beasts”.

The UD3 product stood for Upper Deck 3, Upper Deck’s product containing 3 distinct designs to construct the base set. The great minds at Upper Deck made us this eye-catching and unique set. This design greyed out the background to allow the subject to be highlighted but the background has a foil finish so to make its own impact. 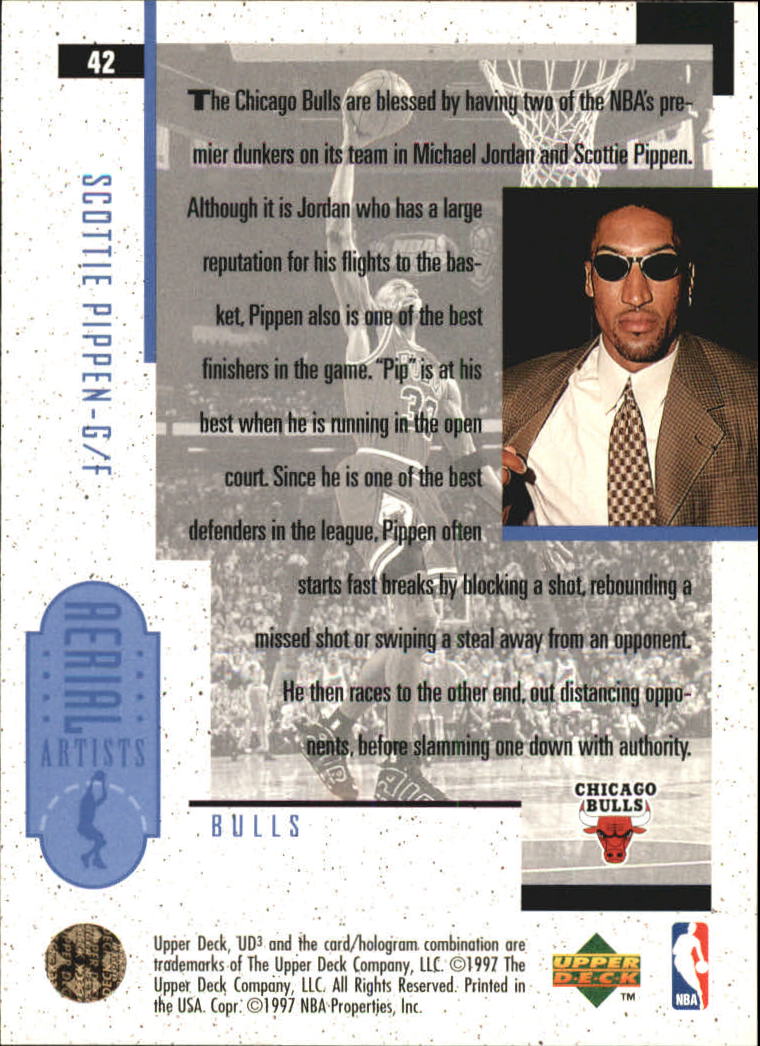 During this era of the NBA, there are so many aspects of culture colliding. Everything about this card is dripping with hip-hop influences and a cheque fashion sense. From the suit and glasses on the reverse to the black-on-black sock and shoe combo on the front, this card is a perfect example of transition. As the athletes in the NBA were coming into their own the league was at a crossroads on how to handle it. Commissioner Stern did not deal with it well at first but eventually saw what these basketball icons were capable of.

Working closely with Nike, Scottie collaborated with them to create a brand that helped change the game. While Scottie may not have been the most vocal off the court, the Nike More Air Uptempo’s were almost his voice on the court. They were subtle in design but spoke volumes when Pippen dunked on you. Which, if you weren’t ready for, could be monstrous. Just ask Patrick Ewing. 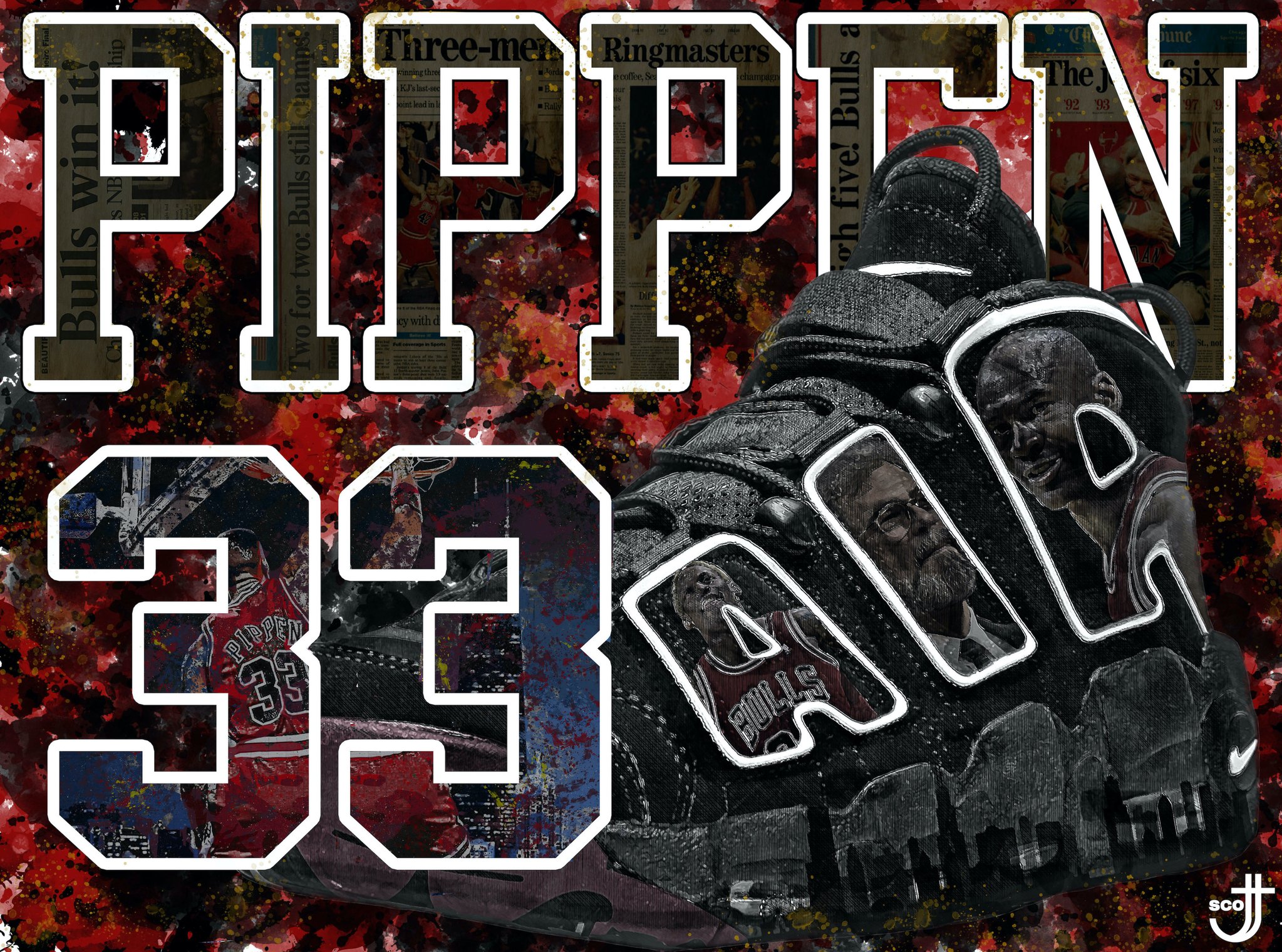 Thank’s for checking in this week. We would love to know your thoughts about Pippen, so please share them in the comment section. Also, if you aren’t following Jake already, please check out his YouTube channel and hit that subscribe button. Great basketball content there. Also, the Cards and Kicks: Scottie Pippen edition art was created by Scott Hodges. Make sure to check out Scott over on his site as well.