The idea for Cards and Kicks is one that I have been kicking around, no pun intended, all year long. With the explosion of the secondary market in 2020, especially the basketball market, and the success of the Last Dance on ESPN, I wanted to explore the topic of the shoes featured on cards from the stars of the hobby. That being said, I need to admit that I’m a closeted sneakerhead and I’m just learning the ins-and-outs of that culture and its place in the hobby. So I had to bring in some outside help in the form of ’90s Basketball aficionado, Jake Roy. Jake’s knowledge of ’90s era basketball is second to none and he’s the perfect partner for this series. Let’s get started with Cards and Kicks: 1995-96 Upper Deck Michael Jordan.

The first subject for this series was never in doubt. It was always going to be Michael Jordan. The card, however, well that’s a different story.  Jake dug through images to come up with the perfect card to feature here and after several discussions, we choose Jordan’s 1995-96 Upper Deck #339. 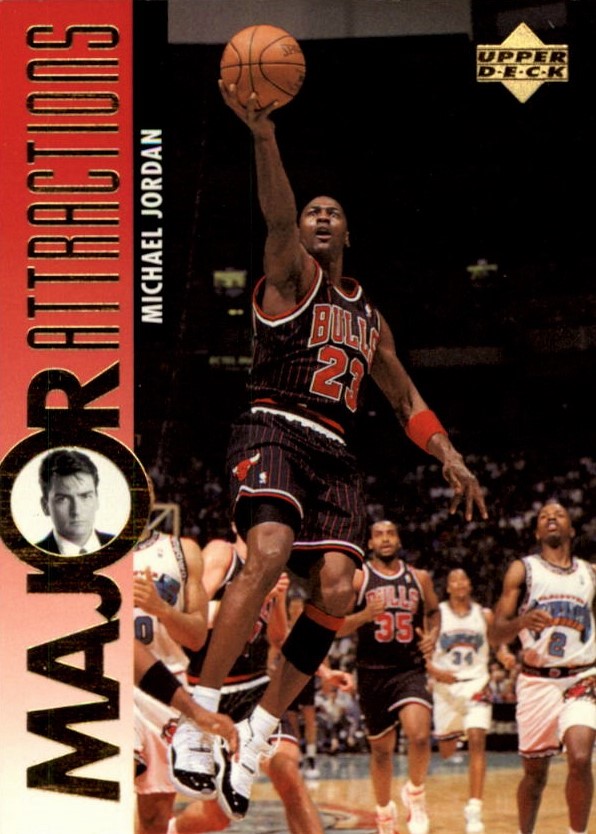 From a collecting standpoint, there isn’t really anything that would stand out about this card. It’s readily available on the secondary market and isn’t expensive in the least bit. So, unless you are just a Jordan completist, you have probably overlooked this card. However, for the purpose of Cards and Kicks, this is a perfect card. It’s full of ’90s era nostalgia, as Jake points out.

JR: If I had to use one word to describe this card it would have to be WINNING! There is almost too much winning to contain on just one card. Michael Jordan AND Charlie Sheen!

Aside from the two famous men featured, we also see what may be the most popular Jordan shoe ever produced. The Air Jordan XI (11) in the Concord colorway was a shoe showstopper when they were first released, and they still are today! Paired with the Bulls alternate jersey with the black and red pinstripes helps the kicks pop a bit more. That Jersey also evokes all of the fun of the NBA in the 90s.

The Air Jordan 11 is probably best known in the Concord colorway. Today you can find them re-released in countless colorways and with different materials. However, the “OG” Colorways remain the most sought after. MJ wore these shoes in the iconic movie Space Jam. The Space Jam colorway is mostly black, featuring a blue Jumpman logo, and white midsole which is consistent in all the OG colorways. 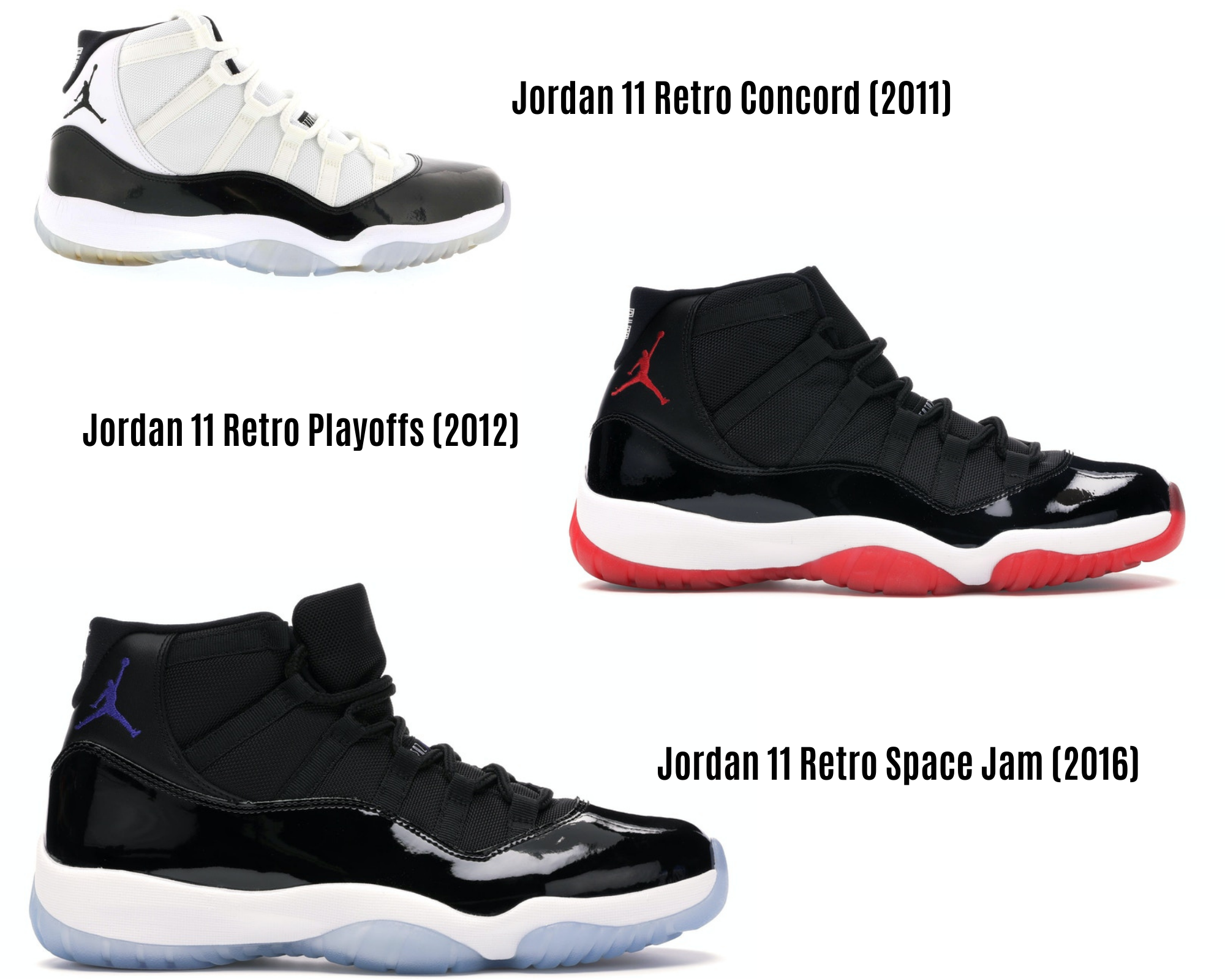 In the playoffs, he rocked these in “BRED” (Black & Red) colorway. Again, mostly black but with a red Jumpman and a red outsole. MJ was known for switching to a mostly black colorway of his shoes specifically for the playoffs. The BREDs were all over the highlights when the Bulls defeated the Sonics in the Finals. Air Jordan also showed us a special all-white version of these in the All-Star game. Modern sneakerheads are still waiting for Nike to release the all-white version again.

There is even more 90s greatness here too. Greg Anthony and the Grizzlies with those classic Vancouver uniforms. How about the 5 players Charlie picked as his favorites on the back. Imagine those guys together on 1 team! We also get a blast of nostalgia from the 3 blockbuster movie credits they list for Sheen. 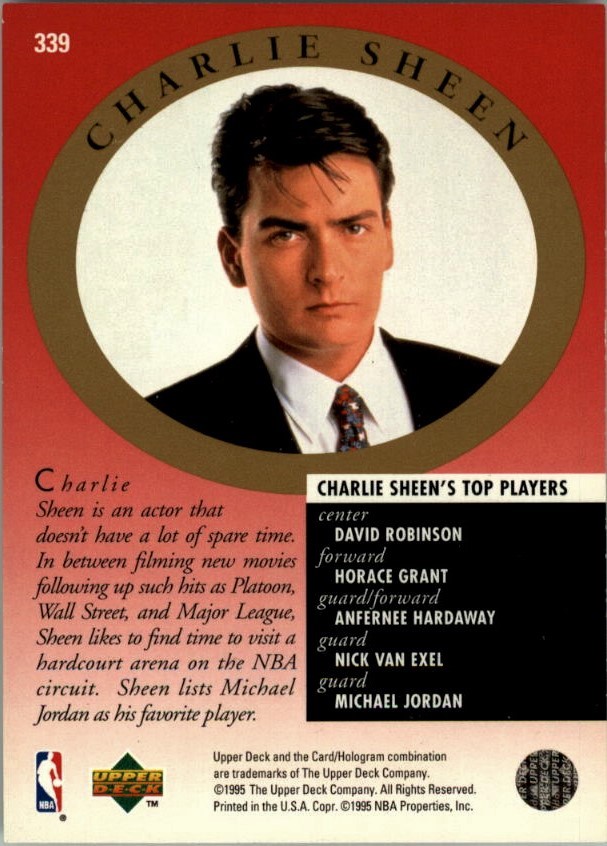 The Jordan 11 Concords all-but defined an era of collecting shoes and one of the main reasons we selected this card, the other being Charlie Sheen. If you take a closer look at your collection from the ’90s you are bound to find the 11s featured on more than a hand full of cards. If you do, let us know what you find.

That’s going to do it for our first entry in the Cards and Kicks series. Look for these posts to drop every Thursday throughout the rest of the year. If you haven’t already please head over to Jake’s YouTube page and subscribe to his channel to find more great ’90s era basketball content.