Baseball’s career hits leader is one of the sports world’s most polarizing — and, yet in some areas, beloved — figures.

And that enigma that is Pete Rose not lost on Leaf as the company is readying a Pete Rose Legacy set coming in November, which will apparently be chock-full of autographs, memorabilia and more. The high-end offering will include signatures, game-used pieces (a bat and a game-used Montreal Expos jersey were used) and inscriptions … lots of inscriptions.

Because he was banned from baseball for betting on the game, Rose has not appeared on an MLB-approved trading card in a standard set since 1989. That has made his releases since then — there have been plenty from companies that are not MLB-approved — of interest to collectors who prefer to remember Rose for his achievements on the field, not his failures off of it.

Click on the images for a full view of the cards below if it shows a thumbnail. 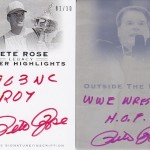 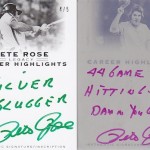 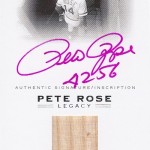 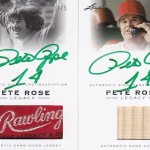 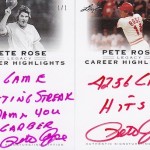 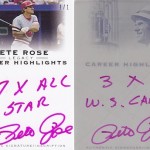 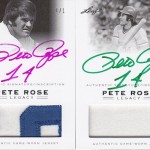 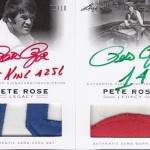 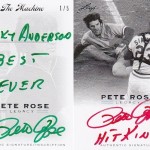 What appears on a Panini video card, ...