Canadian Kid Collector of the Week: Austin from Kelowna, B.C.

Kid Collector of the Week
By Kieran Steckley
0
Share: 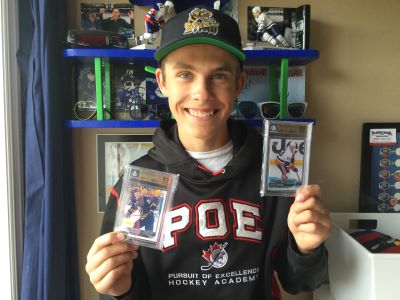 This week we talked to 14-year-old Austin from Kelowna, BC. His favorite local card shop is Players Choice Sportscards and Collectibles in Kelowna.

Beckett Media: How did you get involved in the Hobby?

Austin: My mom took my brothers and I to get a card pack each year on National Hockey Card Day at Player’s Choice in Kelowna. My brother started collecting, so I eventually followed along.

Austin: I’ve been collecting hockey cards for about 3 years.

Austin: The first card I remember is a 2012 NHCD Martin Brodeur card.

Austin: I think that it would be great if card packs would be discounted for kids under the age of 18, making it more affordable for them.

BM: What’s your favorite part about going to buy cards?

Austin: My favorite part about going to buy cards is the anticipation of adding new cards to my collection.