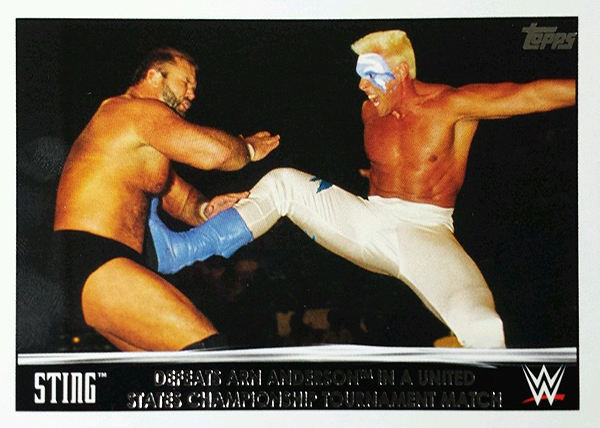 2015 Topps WWE Road to Wrestlemania has several exclusives depending on where you’re buying it and what kinds of packs you’re busting.

The first continues to pay tribute to Sting, a modern professional wrestling legend but one who has fought in a WWE ring only once so far. Bret “Hit Man” Hart and a group of Canadian stars are featured in another crop of exclusives. Among them are the first certified autograph cards from Kevin Owens and Sami Zayn.

Like 2015 Topps WWE and 2015 Topps Chrome WWE, the Sting Tribute cards are available only in specially marked packs and blasters from Walmart. Cards 21-25 are only in Walmart jumbo packs. Numbers 26-30 are exclusive to the store’s value boxes. The set’s not done yet. Each card shows that the plan is to have 40 cards. The final ten will likely arrive with 2015 Topps Heritage WWE later this year.

A similar approach is being taken with a new Bret “Hit Man” Hart Tribute set. Charting 20 key moments from his career, the first ten are included in 2015 Topps WWE Road to Wrestlemania Canadian Relic boxes. The second half of the set is planned for Heritage WWE.

One Bret Hart Tribute card is included in each of the special boxes, which are available to Canadian hobby shops. Each box also has one of ten Superstars of Canada inserts that honor current and recently retired wrestlers and personalities who hail from the Great White North.

In addition to the basic insert exclusives, there are autographed and relic cards. Sting’s autograph (/100) is only in Walmart jumbo packs while a relic and autographed relic (/10) are in Walmart value boxes. Hart has similar cards with the relics coming with a piece of singlet.

Randomly inserted Superstars of Canada autographs are limited to 25 copies each.