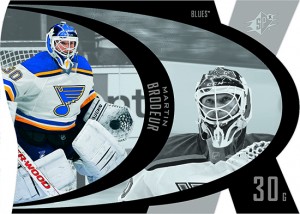 The hockey world is buzzing about the imminent retirement of the legendary Martin Brodeur and an official announcement is expected to come at a press conference on Thursday.

While he staged a brief comeback with the St. Louis Blues earlier this season, it was simply a last hurrah as he stepped in while starter Brian Elliott was injured. Over the course of seven appearances, he posted a 3-3-0 record which included his 125th career shutout while facing the Colorado Avalanche on December 29. His first Upper Deck cards in a Blues uniform will be found in packs of 2014-15 SPx.

Undoubtedly a first-ballot Hall of Famer once he is eligible for induction, he is the NHL’s all-time leader in wins, shutouts and games played by a goaltender. Collectors were first introduced to him through the 1990-91 Score Hockey release and since that time, he has appeared on 7,068 cards that appear in the Beckett database. The total value for them (excluding rarities) is an impressive $178,760.34 and he should hopefully continue to appear in more products in retirement.

Beckett Hockey will continue to add more information to this story as it develops.