The 2018 Sport Card & Memorabilia Expo has a pair of all-time legends scheduled to appear this May. Bobby Orr and Joe Montana will be at the show, signing autographs and meeting fans. 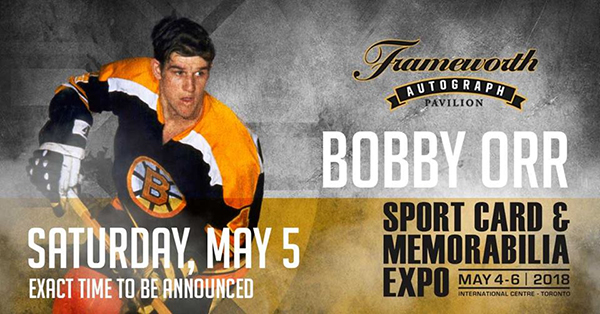 Both players are among those people debate the best-ever in their respective sports. Orr is a three-time Hart Trophy winner as the NHL’s MVP from 1970 to 1972. He also won the Norris Trophy as the league’s top defenseman eight times in a row between 1968 and 1975. A pair of Stanley Cup wins with the Boston Bruins are among Orr’s countless other accolades.

Joe Montana was, arguably, the face of the NFL during the late 1980s and early ’90s. He brought four Super Bowls to San Francisco and is regarded as one of the most clutch quarterbacks in history.

While both Hall of Famers are doing public signings at the Expo’s Frameworth Autograph Pavillion on Saturday, May 5, Orr will also be a part of special yet-to-be announced VIP events.

Bobby Orr autographs at the Expo start at $200 Canadian and go up from there. Premium items are $340 while getting a Rookie Card autographed is $850.

Autograph prices for Joe Montana have yet to be announced.

The 2018 Sport Card & Memorabilia Expo takes runs May 4-6 at Mississauga’s International Center, which is located near Toronto’s Pearson International Airport. The show is regarded as the biggest in Canada with more than 400 booths covering about 100,000 square feet.

The 5 Best and Worst Contracts in ...