Jose Altuve continues to show us that great things can come in small packages.

In 2017, Altuve had one of the best seasons of his career, winning the American League MVP and helping lead the Houston Astros to the World Series.

He was also big off the field, as he and J.J. Watt were named co-Sportspersons of the Year by Sports Illustrated for their help in the relief efforts after Hurricane Harvey.

In 2018, Altuve still excelled, although he didn’t dominate on the same level. He would still finish 13th in MVP voting, but he hurt his knee during the second half of the season.

Going into 2019, Altuve’s still one of the best players in the game, but after the bum knee and his struggles at the end of the season, there wasn’t a whole lot of expectation he’d return to that MVP level. But after a hot start, Altuve is proving he still belongs in that class. Just check out this home run he hit off the train tracks in Houston.

Currently, Altuve has over 5,500 cards in the Beckett Database. After last year many of them cooled down. But some his cards are still very much in demand.

Here are a few of his big sales recently.

If you collect a specific player, you know their 1st Bowman Card is a must-have. If you can get a tough parallel like this one numbered to 50, even better. With just eight copies graded a BGS 9.5 Gem Mint, this is one is can be a tough one to find in top condition. 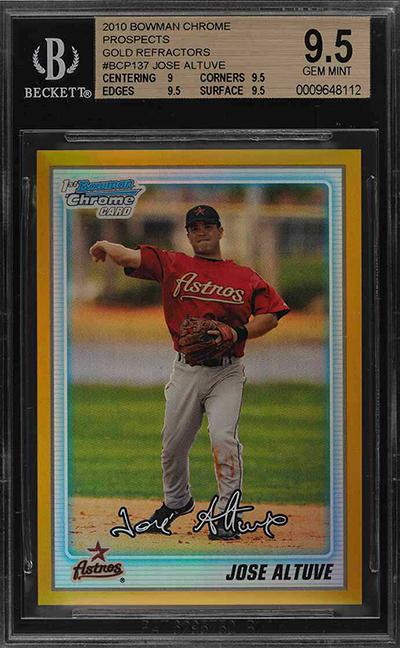 Altuve has just four Rookie Cards and his 2011 Topps Update is a favorite for many. This parallel was exclusive to Target stores so not all collectors had access. Similar to his card above, these can be hard to find in good condition as just six of the 30 graded by BGS have received a Gem Mint grade. 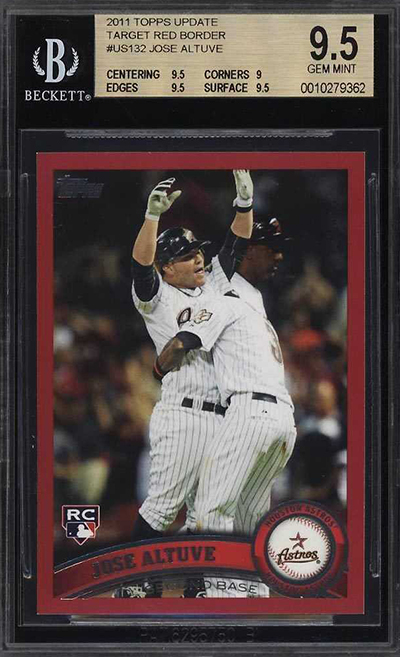 A fan favorite every year, Topps Heritage takes collectors back in time with their designs from previous Topps sets. These Throwback Variations take it to another level by, no surprise here, using images of players from games where their team wore throwback uniforms. At 1:3,310 hobby packs, they are difficult to find. This one of Altuve in the Astros’ iconic tequila sunrise jerseys is probably one of my favorites. 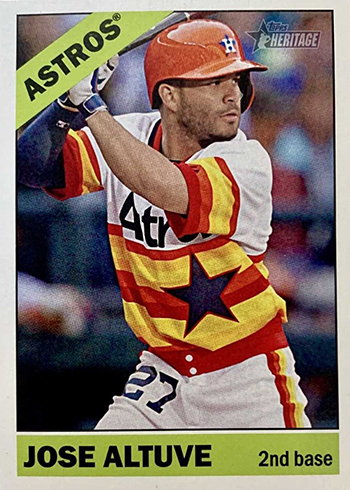