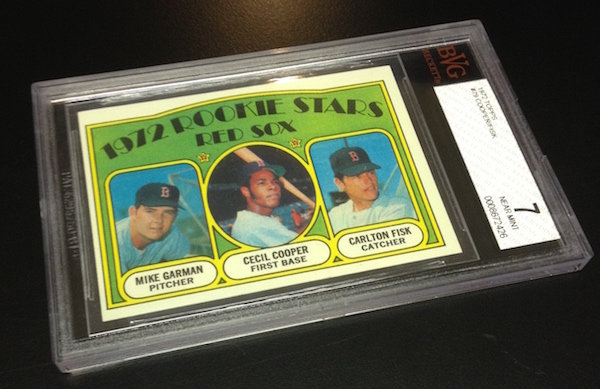 1972 Topps #79 Carlton Fisk RC
When I found this card with a $19 price tag in a mixed box of singles at my local card shop, I stopped and did a double take. Sure, its centering isn’t perfect but other than a minor nick below Cooper’s name this card was very, very clean. It yelled out “grade me” like no other card in the box so here it is. It graded about where I thought it would and this is a nice addition to my collection. As a BVG 7, it’s a card that typically sells for as much as $80.
Pop Report: A total of 957 copies of this one have been slabbed by BGS — that’s a very healthy number for a vintage card — and there are only 115 others like it. A perfect 10 does not exist, but there is a single 9.5 and 14 BVG 9s out there. Grades of 6, 6.5 and 7 are the most commonly received marks for this card. 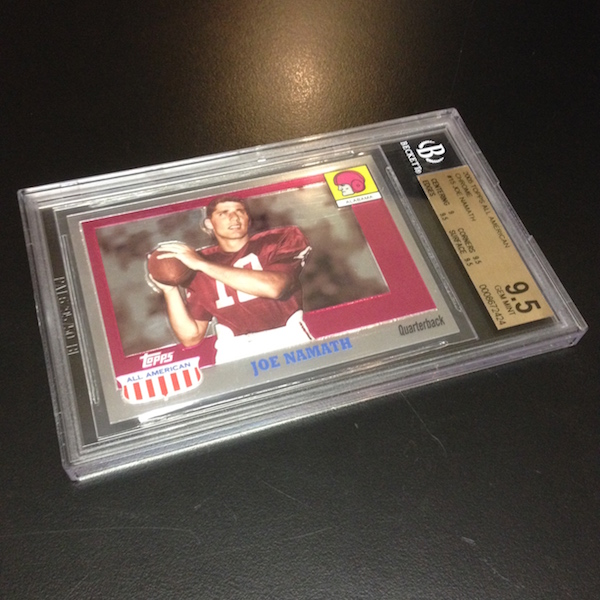 2005 Topps All-American Chrome #15 Joe Namath
This card in both its Chrome and standard version are among my favorites for Namath with the 1955 Topps All-American design re-created using modern-day technology. The photograph is a commonly seen image from his Alabama Crimson Tide days that has been perfectly colorized for use with this new set. I have a handful of the base versions — all top-loaded just because — and just this one Chrome. After a closer inspection, I felt this was a good candidate for grading and I was right.
Pop Report: This is the only copy of this card graded. Even better. 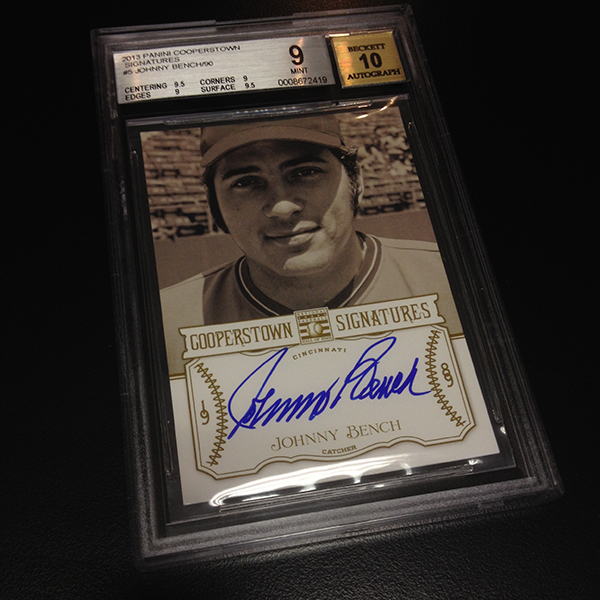 2013 Panini Cooperstown Signatures #5 Johnny Bench /90
This card took quite a journey in the mail to get to me as a redemption from Panini America. According to the postal tracking records, it took nine days in transit with multiple stops to get to me about 12 miles away from Panini headquarters. Nine! (And technically more because it was postmarked a few days before it made it into tracking.) That trivia aside, it’s my only autograph of a legendary catcher and it was very clean inside the top-loader it was mailed in. I decided it needed a slab.
Pop Report: This is the only copy of this card graded by BGS. 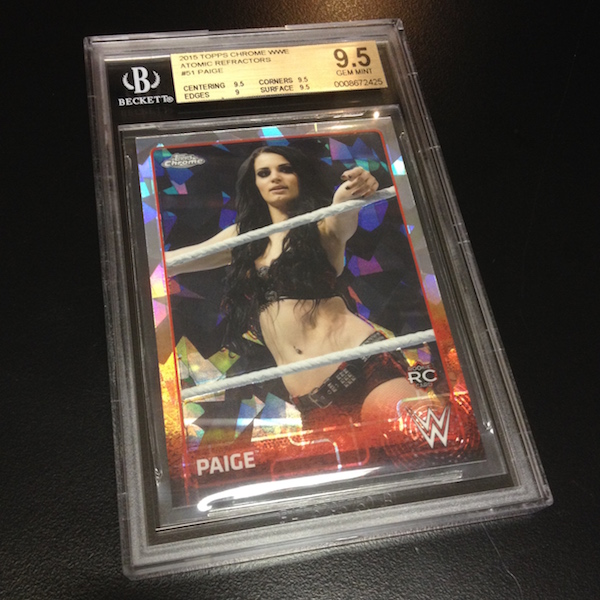 2015 Topps Chrome WWE Atomic Refractors #51 Paige
In past BGS Diary posts, I have had a few WWE cards graded and with the newest Chrome set arriving from Topps I decided that an Atomic Refractor of this popular WWE Diva needed a slab to go along with a few other cards in my stash. These cards are only found in the hanger boxes at retail, so they might end up being a bit rarer than other parallels in this product.
Pop Report: This also is the only copy of this card to be graded. 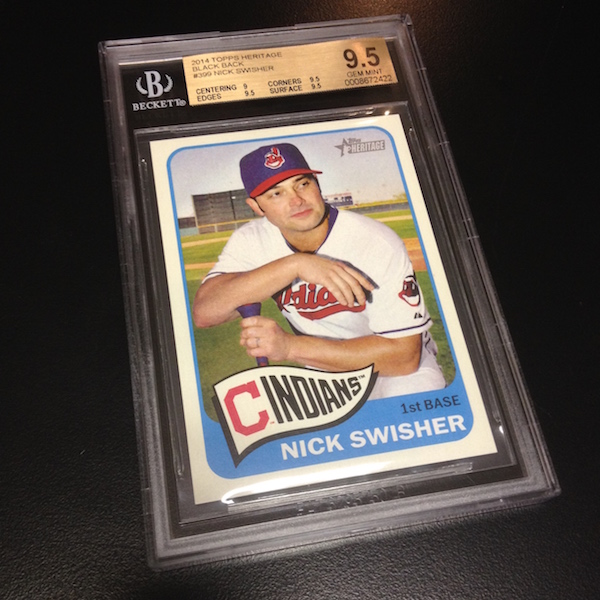 2015 Topps Heritage Black Back #399 Nick Swisher
Topps’ nod to the Venezuelan cards of the 1960s have been tough pulls in the last few years and one of my longer-term goals is to get more of my rarer Swisher cards into slabs for better presentation. I didn’t pull this one, but it was among those that needed it just because of the scarcity.
Pop Report: It’s the only copy of this card graded. For the rare set as a whole, there have been 57 cards graded and only one BGS 10. (That was a Christian Betancourt/David Hale card.) 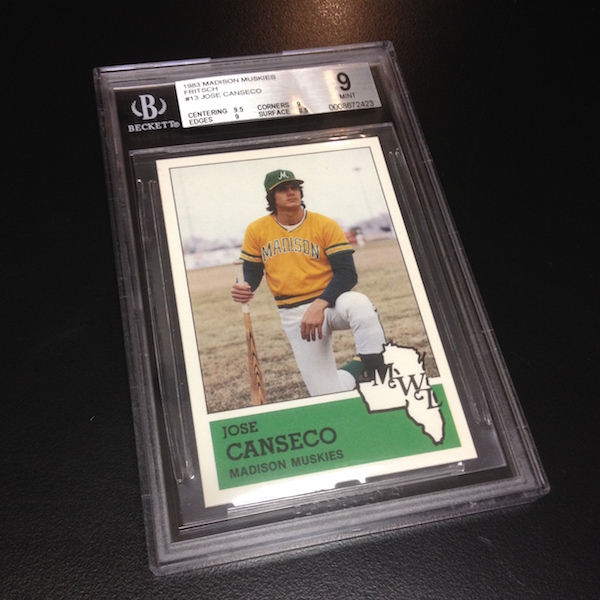 1983 Madison Muskies Fritsch #13 Jose Canseco
Jose Canseco was my favorite player as a kid and his very first card of any kind was in this 1983 minor league team set. In Canseco’s glory days, these sets were very expensive and relatively tough to find, but in recent years I was able to track down several sets and even a batch of uncut sheets. I examined my stash of cards from sets closely and chose this one. It didn’t grade as well as I had hoped but it’s still a respectable mark to me. (Older cards like this can have all kinds of defects from the printer and even more from the wear and tear of time.)
Pop Report: A surprising 67 copies of this card have been graded with 25 others also receiving a BGS 9 mark. Only five higher exist and there isn’t a single BGS 10 in existence. 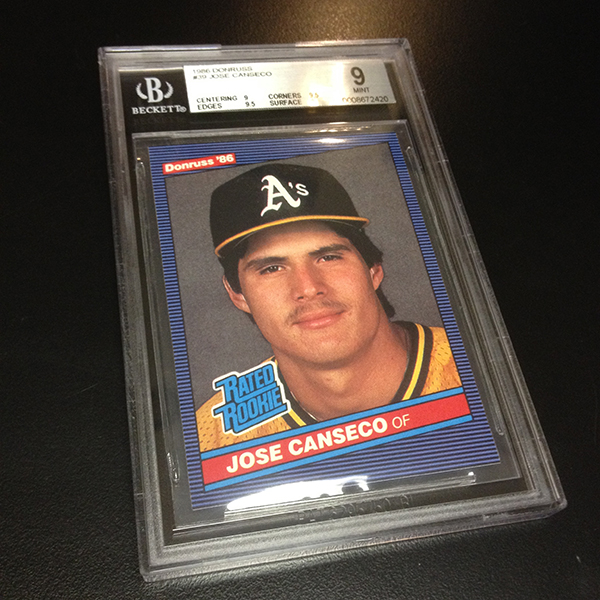 1986 Donruss #39 Jose Canseco RC
Those of us collecting in the late 1980s and early 1990s remember how iconic this card was — and how expensive it was. Back then, I spent $100 on a sealed factory set from my first job to land my first Canseco RC. These days I have around 150 copies and I cherry-picked my stash for what I had thought would have been my best two cards — and BGS 10 contenders. Straight from factory sets, my two Cansecos didn’t make the mark but I have seen examples where the centering is off some but they still received BGS 9.5s. This is the sharpest BGS 9 you’ll ever see — I guarantee that. (I guess it’s time for me to get a loupe, too.)
Pop Report: There are 1,464 copies of this card graded and only 179 better. Of those, only 12 have received a perfect 10. BGS 8 is actually the most-common grade on these cards.